Between 1832 and 1863, more than 1,000 students lived in off-campus boarding houses while attending the College of New Jersey (now Princeton University). Certain boarding houses catered to large numbers of southern students.

Throughout the College of New Jersey’s early history, most students lived in Nassau Hall and other residence halls on campus. Between 1832 and 1863, however, more than 1,103 students—about 38 percent of all Princeton students during those years—chose to live off-campus.[1] These students boarded in the homes of local Princeton residents, including faculty members, college presidents, and other Princeton affiliates.

Students chose to board off-campus for a variety of reasons, from health concerns to the desire for a more varied social life. William Reese (class of 1839) from Athens, Georgia, explained to his cousin George that he decided to live off-campus with one Dr. Scudder’s family to improve his health. He found that the mile-and-a-half walk to campus, as well as the “cornbread, milk, and plenty of apples” that were available to him at Dr. Scudder’s home helped alleviate his indigestion.[2] But he also remarked that living off-campus allowed for out-of-town excursions with other student boarders. Reese mentioned that there were “as many as six at my house, fellows fond of moderate sport and altogether plebeians like myself. We have had several frolics and calculate on some two or three before long.” For Reese, these “frolics” meant not “champagne or a set of girls, but reasonable healthy walks to the neighboring towns where we order a good dinner and some choice [cigars].”[3]

Boarding house proprietors were often intimately connected to the college. Slaveholding and non-slaveholding professors alike boarded students in their homes. Professor Albert Dod, one of the last slave-owners in Mercer County, boarded northern students attending the college during the 1850s. Throughout the 1830s, John Maclean Jr. (then a professor and later the college president) housed members of South Carolina’s Ancrum family. One of his boarders, Thomas J. Ancrum, was involved in multiple incidents of violence on campus—most notably the attempted lynching of a white abolitionist in 1835, and an assault on black minister and Princeton Theological Seminary alumnus Theodore Wright in 1836.

Although Maclean Jr. did not own slaves and likely held moderate antislavery views himself, he was particularly popular with southerners at Princeton. One student from a prominent Georgia family commented that Maclean “reminds me more of one of our regular hospitable Southern gentlemen than almost any other person with whom I have met.”[4]

But while southerners were not more likely to live off-campus than northerners, particular boarding houses did become bastions of southern students’ social lives. Students choosing to live with other students from the same geographical region mirrored boarding house trends during the antebellum United States, including politicians in Washington, D.C., who “much preferred to live in groups restricted to men having approximately the same geo-cultural affiliation.”[5]

Some boarding houses became regional hubs. For example, all ten of the young men Robert R. Ross hosted in his home between 1835 and 1851 hailed from the South, including six from Georgia and three from Alabama.[6] Southerners, however, were not the only students who preferred to house with others from their home region. Mrs. Ten Eyck boarded eleven students from the Mid-Atlantic region between 1832 and 1834. Six of these students came from New York, with the other five from New Jersey.

Regionalism does not account for the composition of all boarding houses, however. Records indicate that 199 Princeton residents hosted students, with most housing students from a variety of geographical backgrounds. 104 of the 199 proprietors boarded at least one southern student at some point during this period. Certain houses, however, seemed to attract southerners year after year—perhaps suggesting a particularly hospitable environment for young men from the slave-holding South.

Marian Passage, the unmarried daughter of well-known and well-liked Princeton baker John Passage, ran a boarding house from the late 1840s through the Civil War.[7] According to federal census records, the Passages owned a slave in 1830 but not in 1840; this individual may have been freed as a result of New Jersey’s gradual emancipation law.[8] The Passage house proved immensely popular with southern Princeton students. Before 1865, the Passages boarded 34 southern students total, the second-highest number for any Princeton boarding house. Even more telling, 77% of all of the boarders the Passages took in came from the South. The number of southern students attracted to their home year after year suggests that the Passage family’s history as slave-owners and views on race and slavery were likely compatible with the beliefs of southern students.

Other proprietors took in southern boarders because of family ties. Theodosia Prevost, a descendent of eminent Princeton presidents John Witherspoon and Samuel Stanhope Smith housed two members of the wealthy Kentucky Breckinridge family from Kentucky—John B. Breckinridge from 1840-43 and Marcus Prevost Breckinridge from 1847-48. The Breckinridges were related to the Prevosts by marriage as well as through Witherspoon and Smith. Unlike many of her southern relatives, however, Theodosia Prevost was involved in anti-slavery activism. She played a key role in the fugitive slave trial of James Collins Johnson, contributing money to purchase Johnson’s freedom in 1843—while Kentuckian John B. Breckinridge was boarding in her house.

But southerners Marcus and John B. Breckinridge may not have been as out of place in Prevost’s home as they first appear. Some of the most notable members of the Breckinridge family were slave-owners and staunchly proslavery, but Prevost’s boarders were the sons of William Lewis Breckinridge, a Presbyterian minister who opposed the politics of his famous proslavery relative John C. Breckinridge and in fact hoped to have emancipation written into the Kentucky state constitution.

Examples such as these illustrate both the interconnectedness of Princeton and the South as well as the complexity of student life. In John B. and Marcus Breckinridge’s case, southern origins did not necessarily indicate proslavery beliefs. Their example raises questions about the diversity of Princeton’s antebellum student body—not merely in terms of students’ geographical origin, but in their politics and ideas.

Though there are still many stories to uncover about the off-campus life of Princeton students in the years leading up to the Civil War, further examination may provide insight into how Princeton residents, and in particular those running boarding houses, shaped students’ views on race and slavery outside of the classroom.

The following database of Princeton students who boarded off-campus before the Civil War draws on research from census records, Princeton student catalogues and the Princeton & Slavery Project Student Origins database. 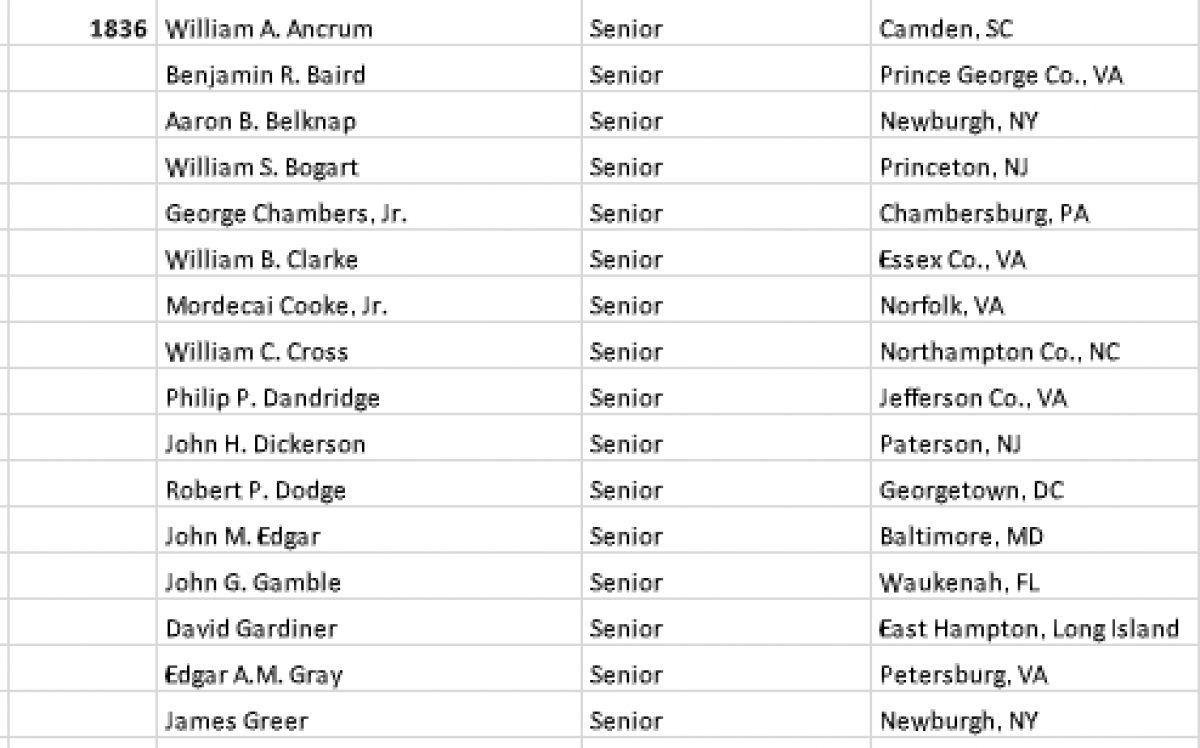 Spreadsheet including names, class years, home towns, and other information related to Princeton students who lived in off-campus boarding houses.

Megan Armknecht is a PhD Candidate in History at Princeton, where she studies the importance of households in the structure of 19th-century U.S. diplomacy.

View all stories by Megan Armknecht »

John Sterling Young, The Washington Community: 1800-1828 (New York, 1966), 98. See all of Chapter 5 for a discussion on sectionalism within boarding house culture among D.C. politicians in the antebellum era.

If “Mr. R. R. Ross” was the same person as the “Mr. Ross” listed in historical records, the number of southern boarders would be even higher. According to Ancestry.com data, multiple Rosses lived in the area who might have been boarding house proprietors. The link between these two men is, as yet, uncertain.