A truly national denomination from the 18th century to the Civil War, American Presbyterianism encompassed a wide range of viewpoints on slavery. Prominent leaders in the church were slaveholders, moderate antislavery advocates, and abolitionists.

In the colonial era, Scots-Irish immigrants comprised the large part of American Presbyterians. Either coming directly from their homeland—or, more commonly, having resided in northern Ireland for one or more generations—these immigrants chiefly settled in the middle colonies from New York to Virginia, where they lived among slaveholders and sometimes owned slaves themselves.

The Reverend Francis Makemie is often regarded as the father of the denomination: he played a major role in forming early congregations, organized the first American presbytery in 1706, and contributed to the establishment of the principle of religious toleration though a notable court case in New York the following year.  He also held property in human beings.  A native of Donegal, Ireland, Makemie resided for some time in the British colony of Barbados, whose prosperity depended on slaves and sugar, and his residence in Barbados and trade with the colony financially supported his ministerial labor in North America. Makemie later married into a wealthy family in Accomack County on the eastern shore of Virginia, where he acquired substantial land holdings.  His 1708 will also listed and ordered the distribution of thirty-three chattel slaves. 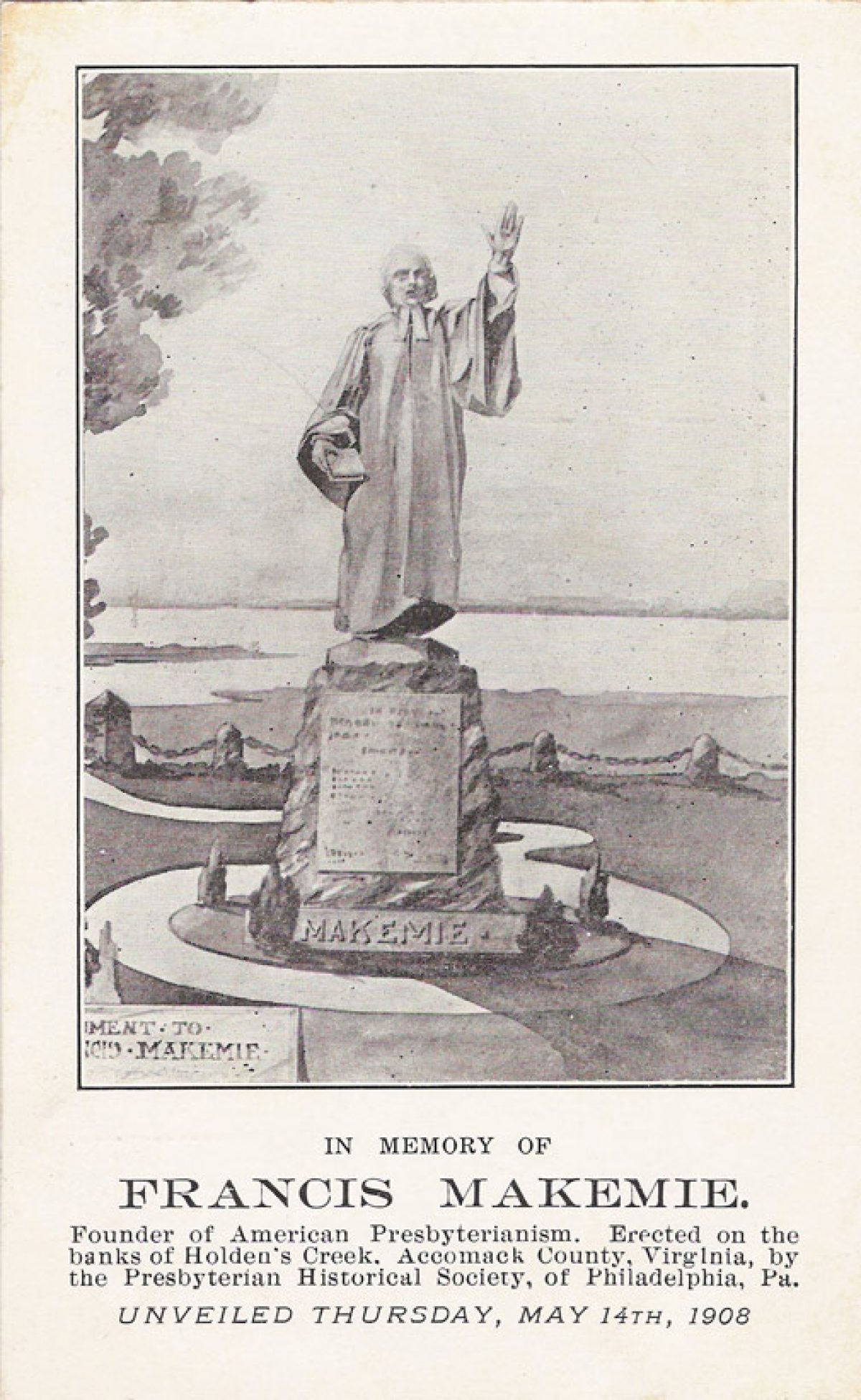 Samuel Davies, the College of New Jersey’s fourth president, did much to extend Presbyterianism into the Piedmont area of Virginia during the 1740s and ‘50s.  Davies preached in a warmly evangelical fashion typical of the Great Awakening, and was particularly interested in ministering to slaves.  He championed literacy for enslaved people and seemed deeply committed to their spiritual welfare.  However, he never questioned the legitimacy of human bondage and owned slaves himself in Virginia.

Non-clergy participated in American slavery and the slave trade to a greater extent than church leaders such as Makemie and Davies.  Scots and Scots-Irish laypeople played a disproportionately large role as traders, managers, or owners in the plantation system.  It is perhaps noteworthy that two slaveholding U.S. Presidents nurtured in the Scots-Irish tradition—Andrew Jackson and James K. Polk—pursued policies in the 19th century that greatly increased the territory available for the expansion of slavery.[1]

Yet some Presbyterians had also begun to espouse antislavery sentiments by the end of the 18th century.  In a sermon defending America’s struggle for independence in 1776, Jacob Green, pastor of the Presbyterian Church in Hanover, New Jersey, asked:

Can it be believed that a people contending for liberty should, at the same time, be promoting and supporting slavery?

This inconsistency, he concluded, was “a crying sin in our land.”  In 1787, at a time when many of the northern states had adopted laws to free slaves gradually, the Synod of New York and Philadelphia declared that it shared “the interest which many of the states have taken…[toward] the abolition of slavery.”  In 1818, the denomination’s General Assembly (the successor to the Synod), adopted a resolution framed in bolder language:

We consider the voluntary enslaving of one part of the human race by another, as a gross violation of the most precious and sacred rights of human nature; [and] as utterly inconsistent with the law of God.

The Assembly called on all Christians “as speedily as possible to efface this blot on our holy religion” and “to obtain the complete abolition of slavery throughout Christendom.”  The resolution passed unanimously, and the committee that prepared it was chaired by Ashbel Green—the son of Jacob Green, the president of the College of New Jersey, and president of the Board of Directors of Princeton Theological Seminary.[2] 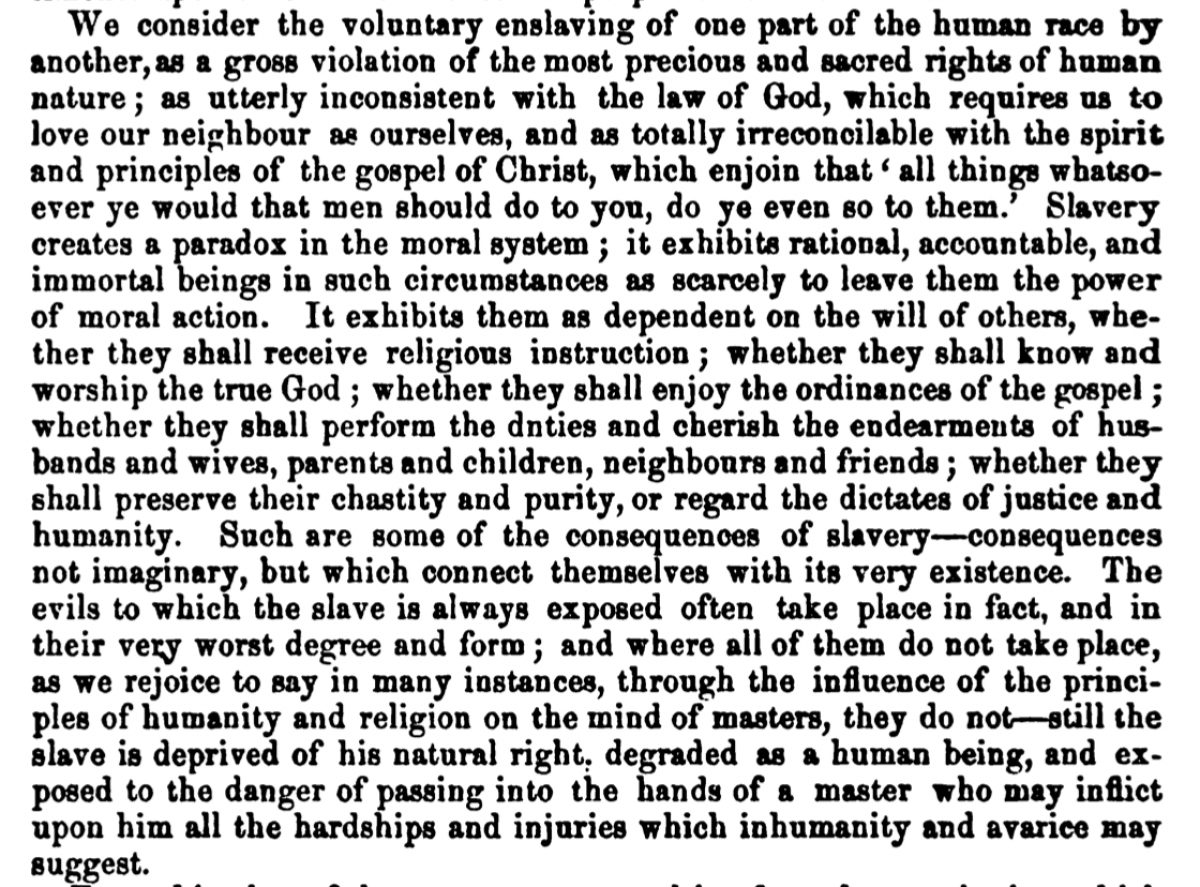 Ashbel Green's report on the relationship of slavery to the Presbyterian church, written for the 1818 General Assembly and cited as the opinion of the church for decades after.

The 1818 pronouncement was not, however, as audacious as its rhetoric seemed to imply.  In fact, the same General Assembly that adopted the statement also upheld the defrocking of a minister in Virginia—the Reverend George Bourne—who had condemned slaveholders as sinners.  The assembly warned against “harsh censures” and insisted that the sizable number of those in bondage, “their ignorance, and their vicious habits generally, render an immediate and universal emancipation inconsistent alike with the safety of the master and the slave.”  Slavery, they declared, could not be ended until those in bondage were prepared for freedom.  Until that indefinite day, masters needed to provide religious instruction to their charges, to treat them without cruelty, and to avoid separating husbands from wives and parents from children.[3]

Moreover, the General Assembly called upon all Presbyterians “to patronize and encourage the society lately formed, for colonizing in Africa, the land of their ancestors, the free people of colour in our country.”  Launched in December 1816, the American Colonization Society’s founders included Robert Finley, a pastor in Basking Ridge, New Jersey and a graduate of the College of New Jersey, as well as a director of Princeton Seminary.  Colonization appealed to diverse motives.  Expatriation drew upon a humanitarian wish to improve the lot of ex-slaves but also upon a desire to “whiten” America and decrease a population of potential subversives.  The bloody and successful slave revolt in the French colony of Saint-Domingue (Haiti) in the 1790s had stoked those anxieties, as did the unsuccessful home-grown uprising led by the artisan slave Gabriel in 1800 in Virginia. As historian Andrew E. Murray observed a half century ago:

[Colonization] was all things to all men.  To the slaveholder, it offered the means of satisfying an uneasy conscience by transporting his emancipated slaves to Africa, where they would not become public charges.  To the moderate antislavery advocate, it held out the hope of the eventual elimination of slavery without antagonizing the slaveholders.[4] 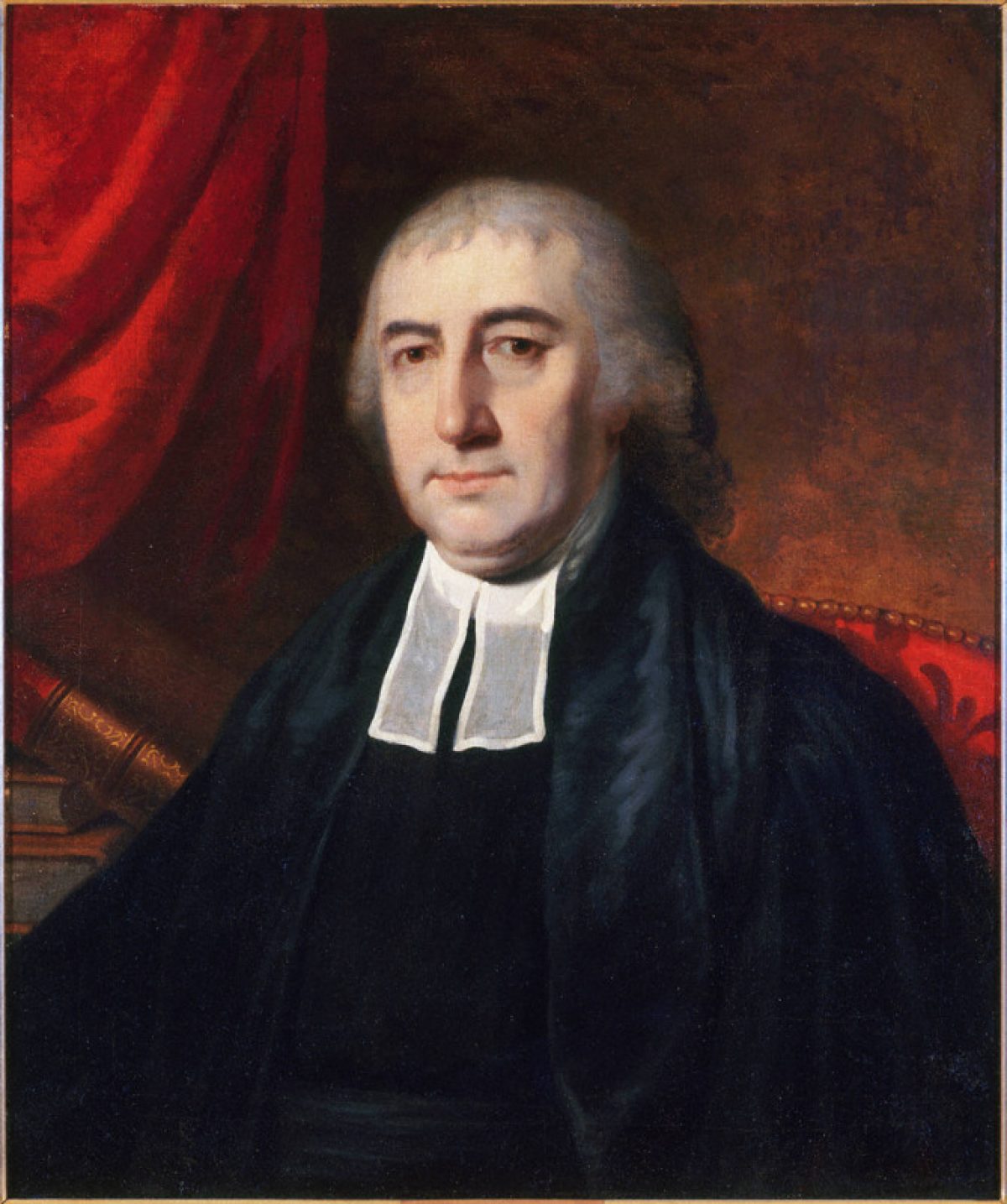 By the end of the 1820s, some Presbyterians called for a more forthright opposition to slavery.  Samuel Cornish, an African American Presbyterian pastor in New York City, co-founded Freedom’s Journal (1827)—the first black newspaper in the United States.  The short-lived paper opposed colonization and condemned slaveholding without equivocation.  It foreshadowed the intense antislavery activism of the 1830s, when agents of the American Antislavery Society (created in 1833) would preach the gospel of immediate emancipation across the country.  Despite their relatively small numbers during this period, however, abolitionists faced a heavy backlash from pro-slavery and less radically anti-slavery whites.  Perceived as a threat to social order, abolitionist speakers were frequently hounded from lecture halls by angry mobs.

To the extent that abolitionism found a home in Presbyterianism, it did so chiefly in those sections of the church where the enthusiastic revival style of evangelist Charles G. Finney held sway—most notably in the so-called “Burned-over” district of upstate New York and the Western Reserve of Ohio. Finney identified with an emerging New School party in the denomination.  The New School advocates—originally New England Congregationalists transplanted to the Northwest and middle states—were open to innovations in theology and practice, more eager than other Presbyterians to engage in interdenominational cooperation, and more likely to espouse social reform.

By contrast, the Old School adhered strictly to the denomination’s confession of faith and eschewed what it regarded as “the restless spirit of radicalism” endemic to the New School.  In a departure from Princeton’s early history as a bastion of radical “New Light” Presbyterian thought in the 18th century, in the 19th century Princeton sided with the conservative wing of the church.  After the two factions split into separate denominations in 1837-38, the college and town was—as historian Sean Wilentz observes—“the foremost intellectual center of Old School Presbyterianism.”[5]

The Old School church itself split along sectional lines at the start of the Civil War in 1861.  Until then, however, Presbyterianism remained a truly national denomination.  Many of its southern members were slaveholders, and prominent Presbyterian clergy in the South—James Henley Thornwell and Benjamin Morgan Palmer, for example—argued that slavery was in fact a positive good.  To accommodate these widely varying viewpoints, the General Assembly of the Old School said relatively little about slavery in the years between the schisms of 1837 and 1861.

Yet at the same time, many northern Old School leaders continued to support moderate antislavery schemes such as African colonization.  Like the College of New Jersey’s presidents, faculty, and students, the Presbyterians of Princeton attempted to occupy a middle ground, hoping for a gradual end to slavery while opposing what they deemed the fanaticism of abolitionists.[6]

James Moorhead is professor of history emeritus at Princeton Theological Seminary where he taught the history of American Christianity for thirty-three years.  Prior to coming to Princeton in 1984, he taught for nine years at North Carolina State University.  Among his publications are American Apocalypse: Yankee Protestants and the Civil War, 1860-1869 (1978), World Without End: Mainstream American Protestant Visions of the Last Things, 1880-1925 (1999), and Princeton Seminary in American Religion and Culture (2012).  He continues to serve as senior editor of the Journal of Presbyterian History.

View all stories by James Moorhead »

Elizabeth Fox-Genovese and Eugene D. Genovese, The Mind of the Master Class: History and Faith in the Southern Slaveholding Worldview (Cambridge and New York: Cambridge University Place, 2005), 409-635.  For a contemporary review of the actions of the Presbyterian General Assembly regarding slavery, see A. T. McGill, American Slavery as Viewed and Acted on by the Presbyterian Church in the United States of America (Philadelphia: Presbyterian Board of Publication, 1865).