A firm majority of Princeton's founding trustees (sixteen out of twenty-three) bought, sold, traded, or inherited slaves during their lifetimes.

The founding of Princeton University was a direct outgrowth of the First Great Awakening, the religious revival that swept colonial North America in the early eighteenth century. In the wake of George Whitefield’s 1740 American tour, a schism emerged between the so-called "New Lights," who embraced a more personal religious experience, and the "Old Lights," who were hostile to the evangelical furor. In early 1746, a group of New Lights hatched a plan for a college in New Jersey to educate young men for the ministry. The four original founders—Jonathan Dickinson, Aaron Burr Sr., John Pierson, and Ebenezer Pemberton Jr.—were all Presbyterian ministers from eastern New Jersey. In short order, the ministers convinced three Presbyterian laymen from New York City to join them: William Smith, Peter Van Brugh Livingston, and William Peartree Smith.[1] As a result of the efforts of these seven individuals, King George II chartered the College of New Jersey (now Princeton University) as British North America’s fourth college in October 1746.

During their initial discussions, the founders decided to expand the college’s mission, declaring:

Though our great intention was to erect a seminary for educating ministers of the Gospel, we hope it will be a means of raising up men that will be useful in other learned professions—ornaments of the State as well as the Church.[2]

In a broadside announcing the establishment of the college, they proclaimed that “no person [would] be debarred…on account of any speculative principles of religion.” Instead, students of every religious affiliation would “have equal privilege and advantage of education.”[3] Thus, the new college would offer a nonsectarian, broad-minded education in the liberal arts and sciences.

Histories of Princeton University have since celebrated the school as a contribution to a growing democratic spirit in the colonies—a sentiment that eventually led to the American Revolutionary War. What those histories fail to mention, however, is that every single one of the seven founding trustees was a slaveholder. What’s more, of the five trustees added to the charter in 1747, four were slaveholders, bringing the total to eleven out of twelve. By the time a second charter was granted in 1748, thirteen additional trustees had been added, making for twenty-three trustees in total (two of those included in 1747 did not sign the 1748 charter).[4] Of the thirteen trustees added in 1748, seven were slaveholders.

Overall, a firm majority of the founding trustees—sixteen out of twenty-three—bought, sold, traded, or inherited slaves during their lifetime. Founded to defend religious and intellectual freedom, the College of New Jersey began with deep and intimate ties to human bondage.

A newspaper notice announcing the establishment of the College of New Jersey in 1746.

All seven founding trustees of the College of New Jersey were slaveholders. Each of them was dependent on slaves for agricultural and domestic labor, for liquid credit during commercial transactions, and as depositories of wealth for their descendants.

Reverend Jonathan Dickinson, the college’s first president, is a case in point. In June 1733, Dickinson purchased an enslaved girl named Genny from a neighbor. The bill of sale stipulated that Dickinson and his heirs were thereby guaranteed to the “Possession and Property of the said Negro girl” for the duration of “her natural Life.”[5] Slavery remained central to Dickinson’s worldview throughout his career in the pulpit. Indeed, in a sermon entitled “Directions for Walking with God,” he developed the theme of benevolent mastery. “You are under [an] obligation to take care of the souls of your servants,” Dickinson told his congregants. “For you should always remember, that the soul of your meanest slave is of more value than this whole world.”[6]

Like Dickinson, Reverend John Pierson owned an enslaved child who worked as a servant in his household.[7] But a similar domestic arrangement fell apart for trustee William Peartree Smith. In August 1758, Smith’s slave, Prince, ran away from his estate in Elizabethtown, New Jersey. Last seen in New York City, Prince eluded the authorities by forging a pass stating he was on an errand for his master.[8] In hopes of recovering his property, Smith placed a runaway advertisement in the New-York Gazette. It is unknown whether Prince was ever captured or returned.

Slavery also enabled the smooth functioning of intergenerational transfers of wealth. Founding trustee Ebenezer Pemberton Jr., the pastor at First Presbyterian Church in New York City, descended from a long line of slaveholders. When his grandfather James Pemberton died in Boston in 1696, he bequeathed to his son, Ebenezer Pemberton Sr., a “negro boy” for “his own use and behoof.”[10] But eighty years later, Ebenezer Pemberton Jr. apparently had a change of heart over the institution of slavery. In his 1777 will, he included a clause that read: “My Will is, I thereby order that my Negro man Jack have his freedom given him.”[11]

Much like Pemberton, trustee Peter Van Brugh Livingston descended from slaveholders. The Livingstons, a family of prominent New York merchants, initially amassed their wealth by investing in slaving voyages to the West Indies.[12] Peter Van Brugh Livingston owned numerous slaves, as evidenced by his 1792 will, in which he declared: “I Do give and bequeath unto my said Nine grandchildren…every one of them a Negro slave.”[13]

In short, the bold declaration of intellectual freedom that impelled the founding of the College of New Jersey rested upon a foundation of unfreedom. From the very beginning, liberty and slavery were inextricably linked. 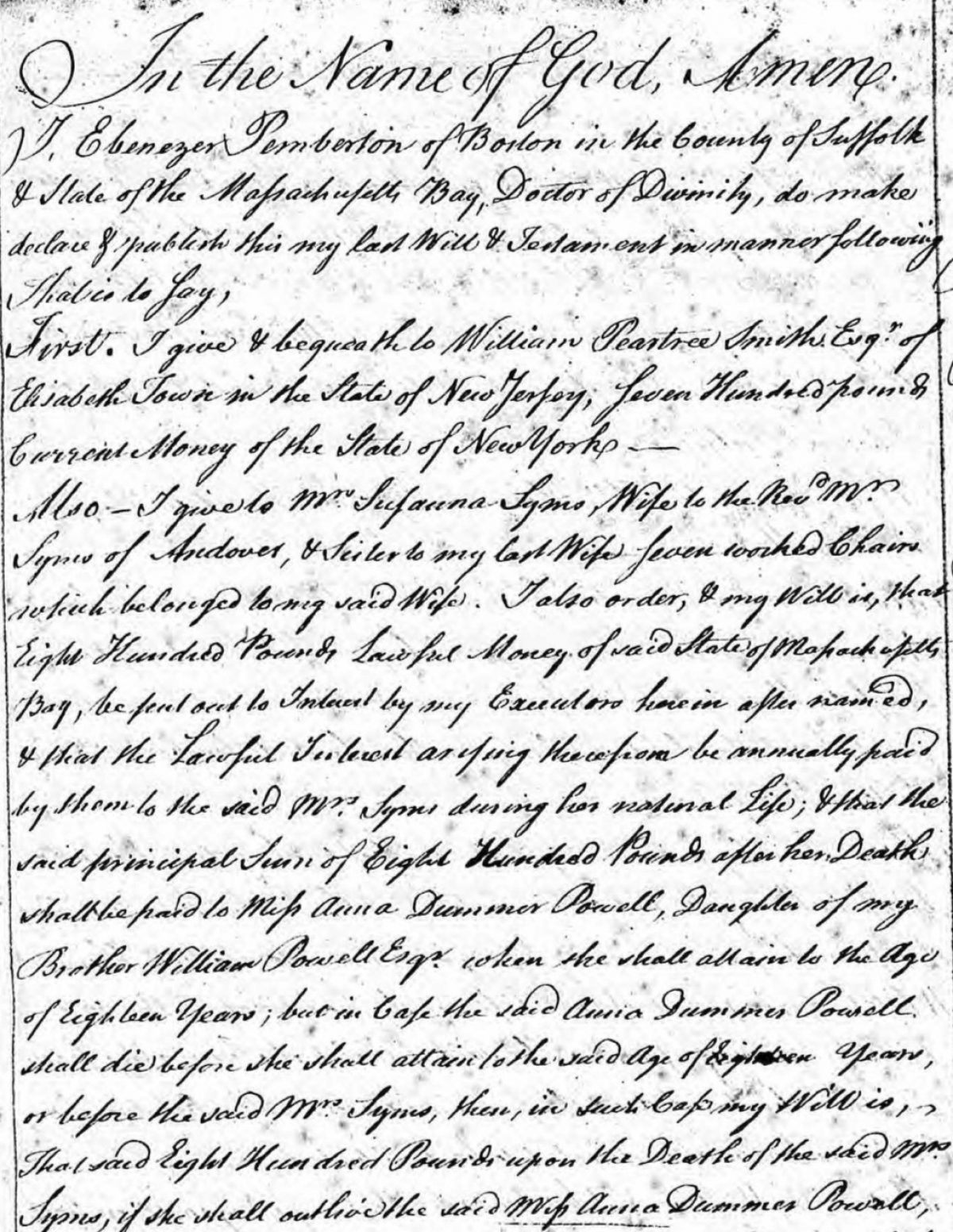 Will of  Ebenezer Pemberton Jr., emancipating "my Negro man Jack" in 1777.

As word of the new college spread, it sparked controversy across colonial North America. Both Quakers and Anglicans greeted the announcement with suspicion. They alleged that the charter was illegitimate because the aging Governor of New Jersey was assuredly “infirm, deaf, [and] suffering from palsy” when he signed it.[15] As their opponents threatened to challenge the 1746 charter in court, the College of New Jersey's seven trustees scrambled to defend their plans.

In order to bolster support for the college, five Presbyterian ministers from Pennsylvania were added to the charter in August 1747.[16] This way, the founders hoped, the college would be considered inter-colonial and not merely provincial. Of these five additional trustees—Gilbert Tennent, William Tennent Jr., Richard Treat, Samuel Finley, and Samuel Blair—four were slaveholders.

Slavery at the time was not restricted to southern plantations; rather, it flourished in the homes of many Presbyterian ministers in northern colonies. The Tennent brothers, for example, were key players in the Great Awakening. In 1726, their father William Tennent Sr. founded the “Log College” in Neshaminy, Pennsylvania—the first theological seminary in North America to serve Presbyterians. And yet, like their father, both of the Tennent brothers owned slaves.[17] Likewise, a tax receipt for Reverend Richard Treat counted “1 Negro” among his taxable property. Reverend Samuel Finley, also a slaveowner, went on to become the fifth president of the College of New Jersey. After Finley died in July 1766, his executors auctioned off “two Negro women, a negro man, and three negro children” from the front steps of the President’s House in Princeton.[18]

Of the group of twelve original trustees, records of slave ownership exist for each man except Reverend Samuel Blair.[19] As of 1747, therefore, at least eleven of the twelve founding trustees were slaveholders. 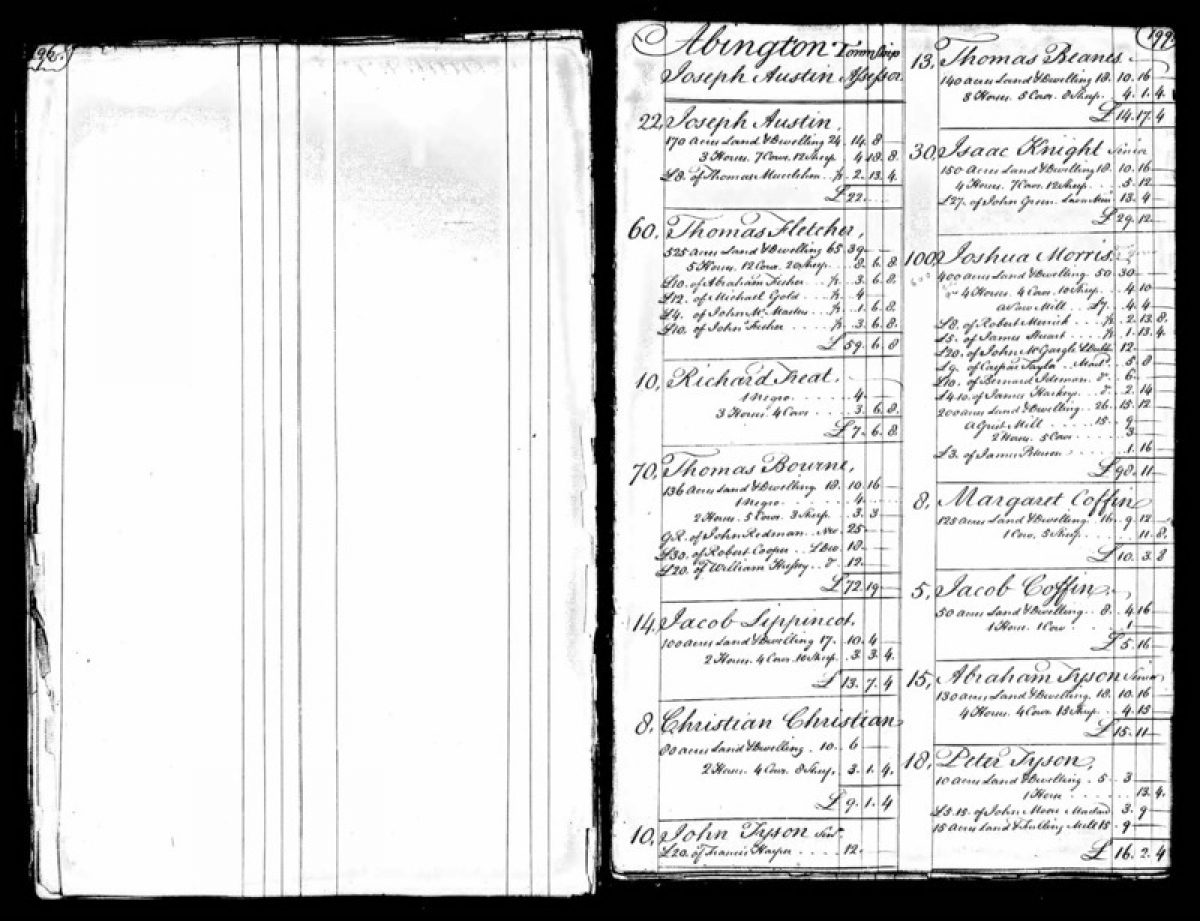 Despite the college's broader geographical base, attacks continued. Jonathan Belcher's 1747 appointment as Governor of the Royal Province of New Jersey, however, presented an opportunity. The new governor proved a friend of the college and reissued the school’s charter in September 1748. Belcher advocated for the addition of several government officials to the board of trustees, which helped fortify the college against criticism.[20]

The 1748 charter increased the Board of Trustees from twelve to twenty-three members.[21] Of the thirteen additional trustees, at least seven were slaveholders: Jonathan Belcher, John Reading, Thomas Leonard, Edward Shippen, Samuel Hazard, David Cowell, and Jacob Green.[22] The new trustees occupied a variety of government and clerical positions—Belcher, the Governor of New Jersey; Reading, acting Governor until Belcher was appointed; Leonard, a member of the Royal Governor’s Council; Shippen and Hazard, successful merchants; and Cowell and Green, Presbyterian ministers. Yet all of them, in different ways, benefitted from slavery. In sum, at least sixteen of the twenty-three trustees named in the 1748 charter were slaveholders.[23]

Reverend Jacob Green, a 1748 trustee, became an outspoken abolitionist during the 1770s. And like many early abolitionists, his conversion to antislavery thought was rooted in personal experience. In 1756 Green had gone into debt to buy a slave, only for the slave to die soon thereafter. “I lost my negro, in a matter that was affecting,” he wrote in his diary. By the Revolutionary era, his position on slavery had shifted decisively. As the controversy with Great Britain heated up, Green denounced the hypocrisy of slaveholding among American revolutionaries. “What a shocking consideration,” he lamented in a 1776 treatise, “that people who are so strenuously contending for liberty, should at the same time encourage and promote slavery!”[24]

Such contradictions, of course, were evident long before the Declaration of Independence. As historian Craig Wilder writes, “human slavery was the precondition for the rise of higher education in the Americas.”[25] So it was with Princeton. 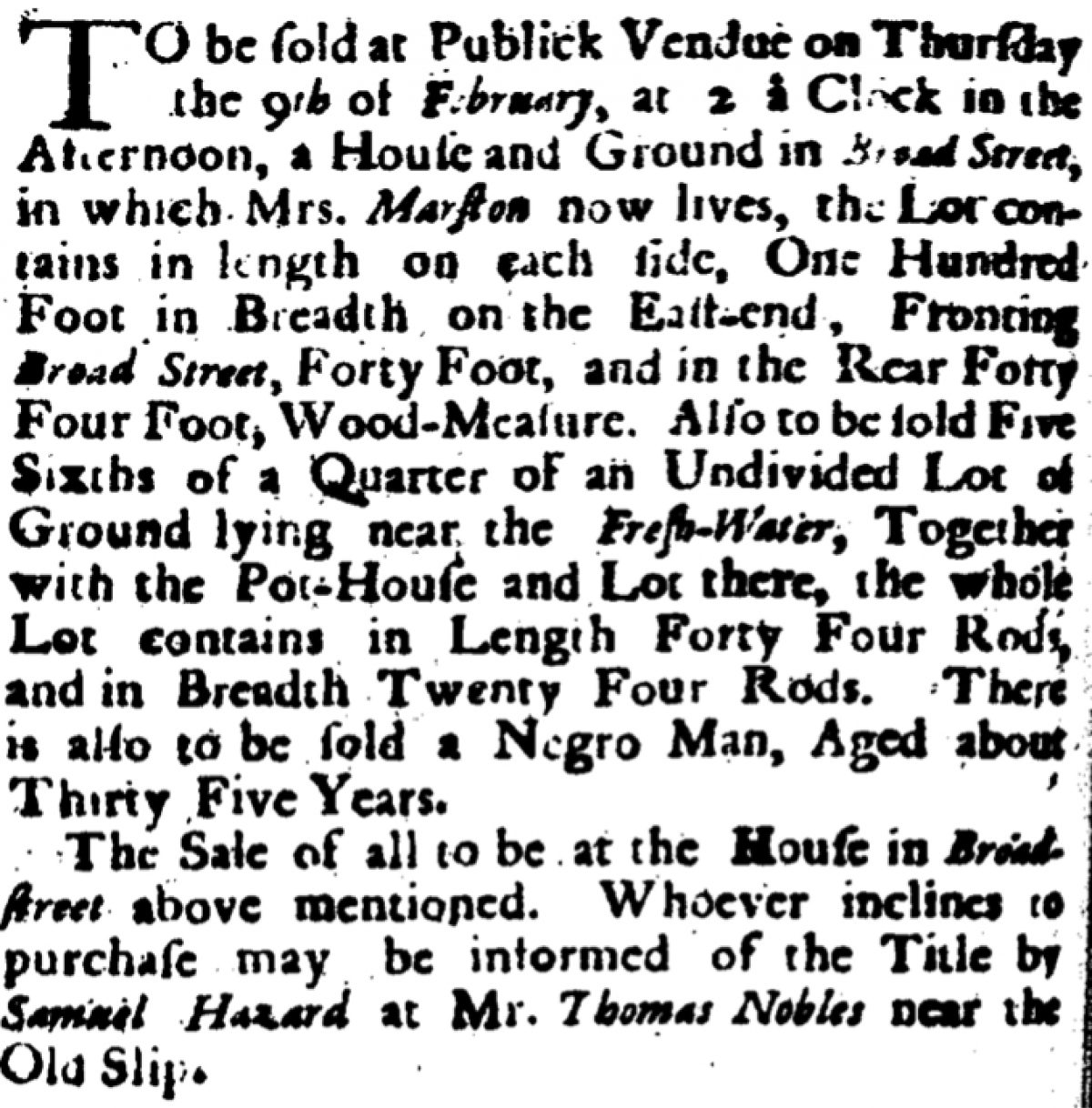 From Dickinson's House to Prince-Town

Princeton University, today one of the country’s elite institutions of higher learning, had very humble beginnings. In May 1747, the College of New Jersey's first eight undergraduates assembled at Reverend Jonathan Dickinson’s home in Elizabethtown. While the trustees searched for a permanent site for the school, Dickinson’s parsonage served as a makeshift college—his spare bedrooms were the dormitories; his collection of books the library; his parlor the lecture hall; his dining room the refectory.[26] Therefore, it seems likely that Dickinson’s slave, Genny, chopped the wood, cooked the meals, and cleaned the rooms for the first cohort of students at the College of New Jersey.

We may never know this for sure, since Dickinson’s personal records were destroyed in a 1780 fire.[27] But we do know that after Dickinson’s unexpected death, the college classes moved to the home of Aaron Burr Sr., another slaveholder. Then, in 1756, the college relocated to its permanent home to "Prince-Town," where Nassau Hall was erected on land donated by a slaveholder.[28]

Jonathan Dickinson signed the 1746 charter, but passed away in October 1747. Samuel Finley was added to the charter in 1747, but he was not included in the 1748 charter.

Will of Samuel Blair, Pennsylvania, Wills and Probate Records, 1683-1993, p. 296, accessed 17 July 2017, www.ancestry.com. There is no mention of slaves in Samuel Blair’s will; however, that alone does not eliminate the possibility that there may be evidence of slaves elsewhere. The research for this piece has consisted solely of a digital search of newspaper databases, GoogleBooks, and HaithiTrust, as well as a search of the records digitized through www.ancestry.com. More extensive research of Samuel Blair’s personal records is needed may indeed uncover evidence of slaveholding.

It must be emphasized that just because this study found no evidence of slaveholding for six of the 1748 trustees, it does not necessarily mean they did not hold slaves during their life; it only means no evidence is immediately available through digital sources. Evidence about slaveowning is notoriously difficult to track down. For instance, in regard to 1748 trustee John Kinsey, one historian writes: “[We] suspect that at least some of the others for whom there is no evidence (such as John Kinsey) [owned slaves] as well.” See Jean R. Soderlund, Quakers and Slavery: A Divided Spirit (Princeton, NJ: Princeton University Press, 1985), 40.

Ibid., 25-47. The land on which Nassau Hall now stands was donated by Nathaniel Fitz Randolph. For record of Fitz Randolphs’s slaveholding, see: [No Headline], advertisement, The New York Mercury, 13 May 1765, 2.