Many of the donors and fundraisers who contributed to the construction of Nassau Hall had substantial personal, familial, or business ties to slavery and the slave trade.

Nassau Hall, built between 1754 and 1756, is the oldest building on the Princeton University campus. At the time of its construction, it comprised the entire College of New Jersey (as Princeton was then called), housing students, the library, the president's office, and classrooms. Nassau Hall appears on the United States National Register of Historic Places, as it was the location of a key American victory in the Revolutionary War—the Battle of Princeton in 1777—as well as the meeting place of the United States Congress in the summer of 1783. Today it houses the Office of the President and other top University administrative offices.

Although no evidence survives to indicate whether or not slave labor contributed directly to the construction of Nassau Hall, land and money for the building came largely from men who benefited from the labor of their own slaves. Six main donors funded the construction of Nassau Hall. Five were slaveowners themselves, and the last was a likely slave-owner, though the evidence is inconclusive. Further, on a 14-month trip to the United Kingdom in 1753-55, Gilbert Tennent (a trustee and slaveholder) and Reverend Samuel Davies (later Princeton's fourth president), raised at least £3,000 and perhaps as much as £4,000 from ministers, private donors, church collections, and members of Parliament. Further research is required to determine whether these UK donors had direct personal ties to slavery or the slave trade. 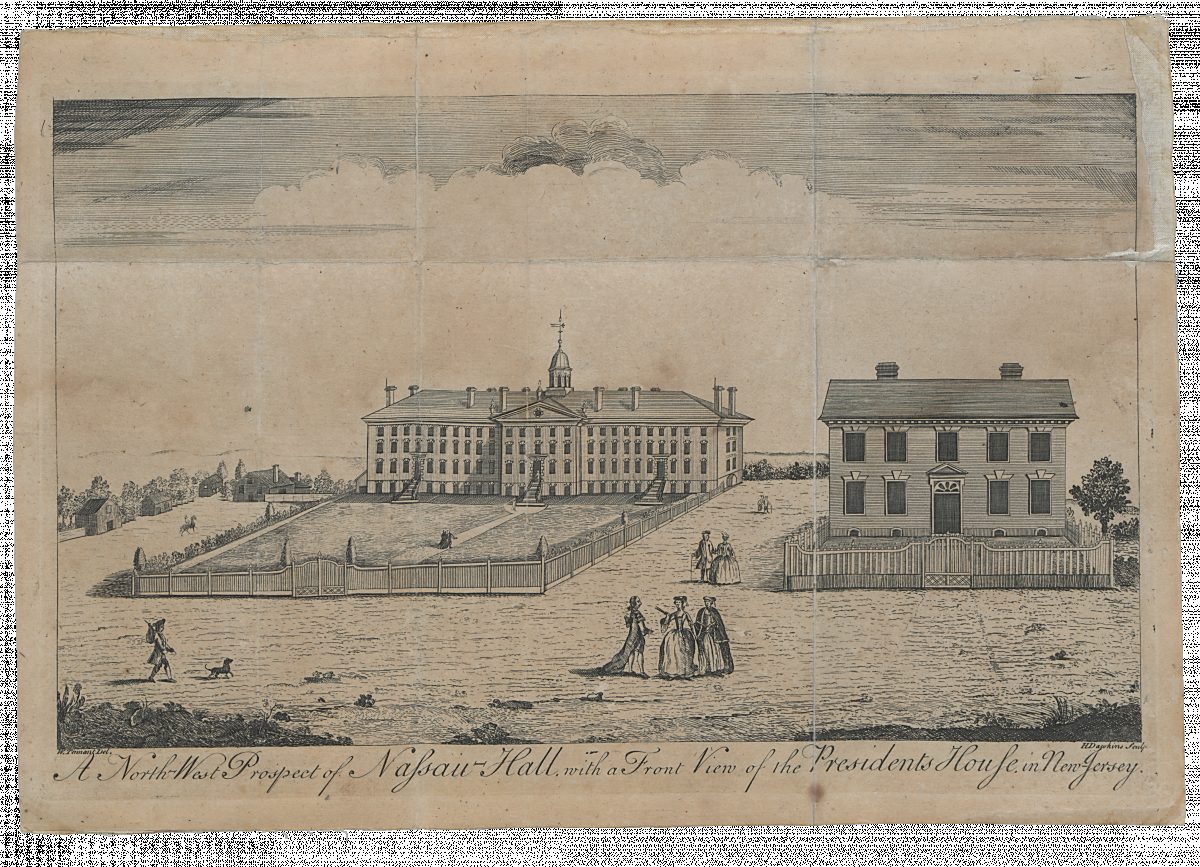 A 1764 engraving of Nassau Hall and the President's House.

In 1752, after receiving support for the idea from the Royal Governor of New Jersey, the College of New Jersey's Board of Trustees announced plans to build a permanent home for the college, which in its first six years had met variously in parishes in Newark and Elizabethtown.[1] The trustees announced a competition between New Brunswick and Princeton: whichever town could raise £1,000 and obtain 200 acres of land would be selected as the new permanent site for the college, a potential economic boom to either place. Four individuals—Thomas Leonard, John Hornor, John Stockton, and Nathaniel FitzRandolph—succeeded in raising and donating roughly £1700 and 211.5 acres of land, surpassing the trustees' request and ensuring the college's permanent relocation to Princeton.

Thomas Leonard, a highly successful landowner, Somerset County judge and colonial legislator, and college trustee, provided the largest single donation to the College of New Jersey. Leonard and his family, described as among "the largest landholders" in both New Jersey and Massachusetts, had extensive property holdings throughout the Princeton area—including houses, plantations, iron production facilities, and open land.[2] Leonard gave the college 160 acres of land to provide fuel for the college, though much of it was sold off by the trustees in the 1780s, when the college faced a financial crisis.[3] Leonard, a slave-owner, left sixteen enslaved people mentioned by name to his wife, children, and other extended family members when he died in 1759.[4]

John Hornor donated seven acres of land to the college, roughly overlapping the present-day loop formed by Wiggins, Greenview, and Humbert Streets at the south end of the Princeton Cemetery.[5] In 1754, the trustees purchased ten more acres of land from Hornor, surrounding the parcel he had donated. Like the land donated by Leonard, the trustees sold off this seventeen acre parcel in the 1780s to raise cash during particularly difficult financial times for the college. An inventory of Hornor's assets in his will included £35 worth of "servants," almost certainly enslaved people, though no other records exist to confirm their identity or his other connections to slavery.[6]

John Stockton's life and career tells a similar story: born into one of Princeton's most prominent land-owning families, his extensive property holdings included Morven, a large plantation that was worked extensively by slave labor (and which survives today as a museum and historic site). Stockton donated forty acres of land to provide fuel for the college in December of 1752, and helped Nathaniel FitzRandolph solicit monetary donations as well.[7] He inherited at least one slave and owned many throughout his life, including at the Morven Plantation just a few blocks away from the college's campus.[8] 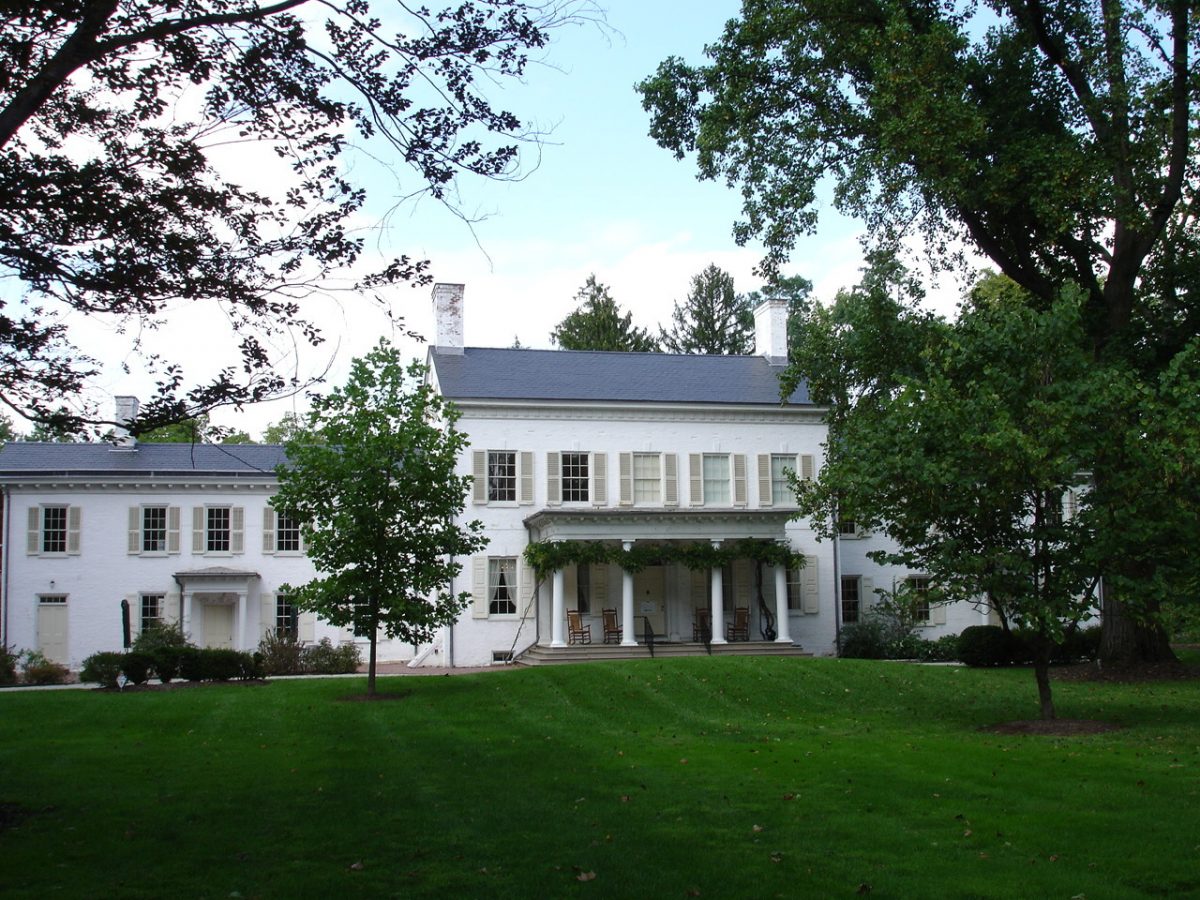 A 2006 photo of Morven, presently a museum and historic site, but formerly the Stockton family residence and a plantation farmed extensively by slave labor.

Nathaniel FitzRandolph came from one of the original white families to settle in Princeton; collectively, the FitzRandolphs owned thousands of acres of land in the area.[9] In 1752-3, he recorded in his diary that he had solicited 15 subscriptions totaling £1,700 to build the College of New Jersey at Princeton.[10] Unfortunately, no records identify these fifteen individuals, so their connection to slavery remains unknown. FitzRandolph himself donated £20 with his wife Rebeckah Mershon FitzRandolph, as well as the 4.5 acres of land on which Nassau Hall presently sits. In 1765, an ad in the New York Mercury for the sale of Nathaniel FitzRandolph's plantation listed "a Negro man" to be sold along with the property.[11] Additionally, at least two of his contemporary relatives (distant cousins Gilbert and Samuel FitzRandolph) owned slaves, and his nephew Cornelius Mershon would go on to be a major interstate slave trader in the 1820s and 1830s.[12]

In sum, the initial money raised to build Nassau Hall and relocate the college to Princeton derived from donors who enriched themselves and their families with slave labor.  These riches built the very foundations of Princeton's central building on campus—without the money they donated, Princeton literally would not stand where it does today. 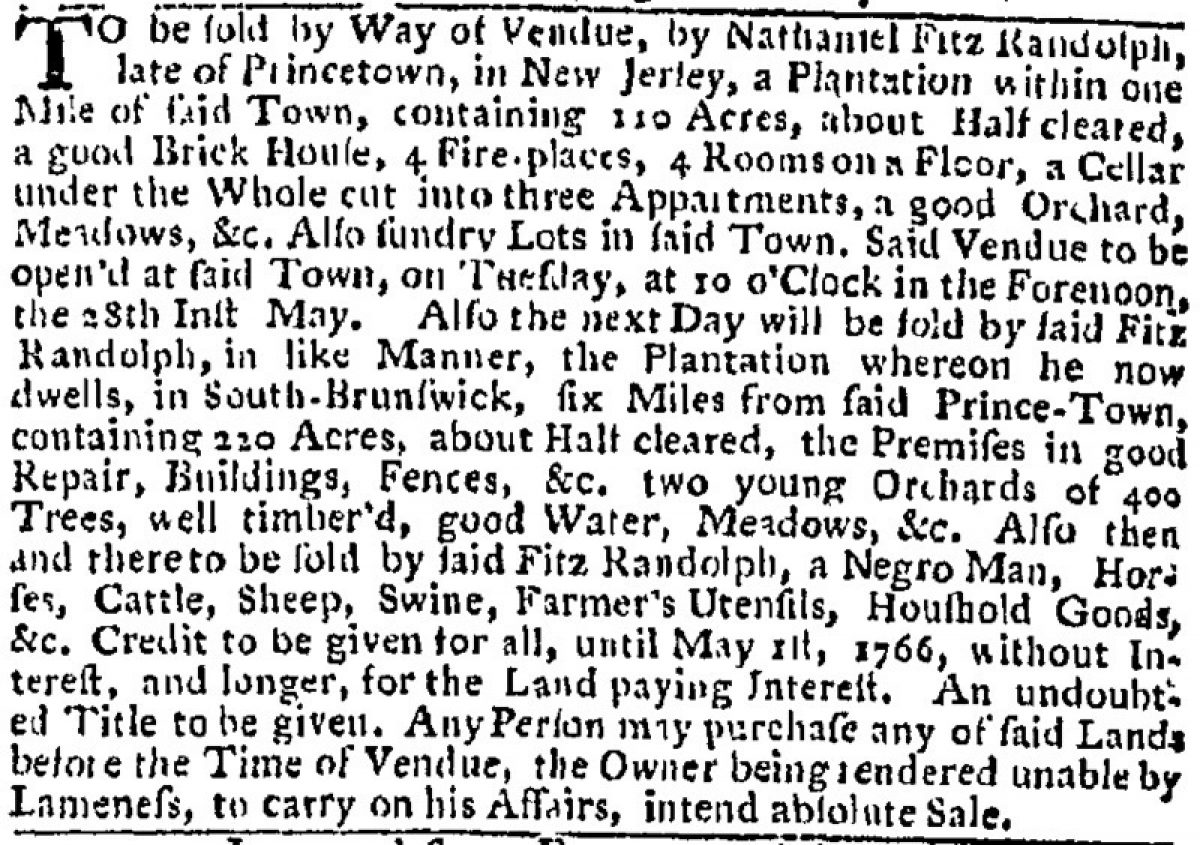 An ad from the New York Mercury, May 13, 1765, for the sale of Nathaniel FitzRandolph's plantation, including "a Negro man."

Of the £4,700 to £5,700 raised in total for the construction of Nassau Hall and the college's relocation to Princeton, roughly £3,000 to £4,000 were raised by college trustees Gilbert Tennent  and Samuel Davies during a fundraising tour of the United Kingdom and Ireland from late 1753 to early 1755.

Both men had significant personal ties to slavery. Gilbert Tennent, born and raised in Ireland, owned at least one slave while a minister in Philadelphia, where he moved with his parents at age fifteen.[13] Samuel Davies, a Presbyterian minister from Hanover, Virginia, owned slaves during his ministerial days in Virginia before serving as the president of the College of New Jersey.[14] Davies also baptized dozens of black congregants at his church in Hanover, and was a strong advocate for the religious education of enslaved people.[15]

Tennent and Davies spent roughly four months of the trip in London, where they met with dozens of ministers, preachers, booksellers, bankers, and a few members of Parliament to solicit private donations as well as signatures for a petition they'd drawn up to lend greater legitimacy to their future appeals. In London alone, Davies and Tennent collected £1,700, at least sixty-seven signatures, and various maps, books, and other artifacts for the college library.[16] This total far surpassed their original goal of £300 for the entire trip.[17]

Tennent's and Davies's biggest success came when they left London for Scotland in late May of 1754. There, they convinced Lord Lothian—head of the General Assembly of the Church of Scotland—to have the Assembly authorize a nationwide collection for the College of New Jersey at all Presbyterian churches in Scotland over the course of that summer.[18] These collections, along with smaller ones Davies solicited while traveling back to London through a series of small Scottish and English towns, yielded a total of up to £1,800, and further bolstered the college's institutional links to the Scottish Enlightenment and the Church of Scotland.[19] While Davies traveled through the countryside, Tennent returned to his native Ireland for five months, collecting an additional £500 from a variety of sources, including the Presbytery of Antrim and the Synod of Ulster.[20] By the time the pair reunited in London in late October, they had raised at least £3,000, and perhaps as much as £4,000 for the College—more than ten times their original goal.[21]

At the time of Davies's and Tennent’s fundraising tour, slavery was legal throughout the United Kingdom—though its practice was limited in scope. In the 1750s, 10,000 people of color (including both enslaved people and free people of color) lived in London, out of a total population of roughly 730,000.[22] Further, it is estimated that the total enslaved population of England and Wales at the time of the Somerset Case in 1772—which effectively emancipated all remaining slaves in those countries—was between 10,000 and 14,000; similar figures are not known for Scotland or Ireland, though they were likely lower.[23] At this time, extant evidence does not directly tie any of the known British donors to the College of New Jersey to slavery or the slave trade.

Overall, the money Tennent and Davies raised in the UK for Nassau Hall was far less intimately connected to slavery than the funds raised in Princeton—though at least one of the two men whom the trustees chose to lead the effort was indeed a slaveholder. A substantial part of the funds Tennent and Davies raised came from people of modest means, churchgoers across England, Scotland, and Ireland who contributed a few shillings in the collection plate for the College of New Jersey. While many of these donors’ names will never be known, more detailed information on the UK fundraising effort—including all donors named in Davies’s diary—can be found in the spreadsheet on the “Research Resources” tab. 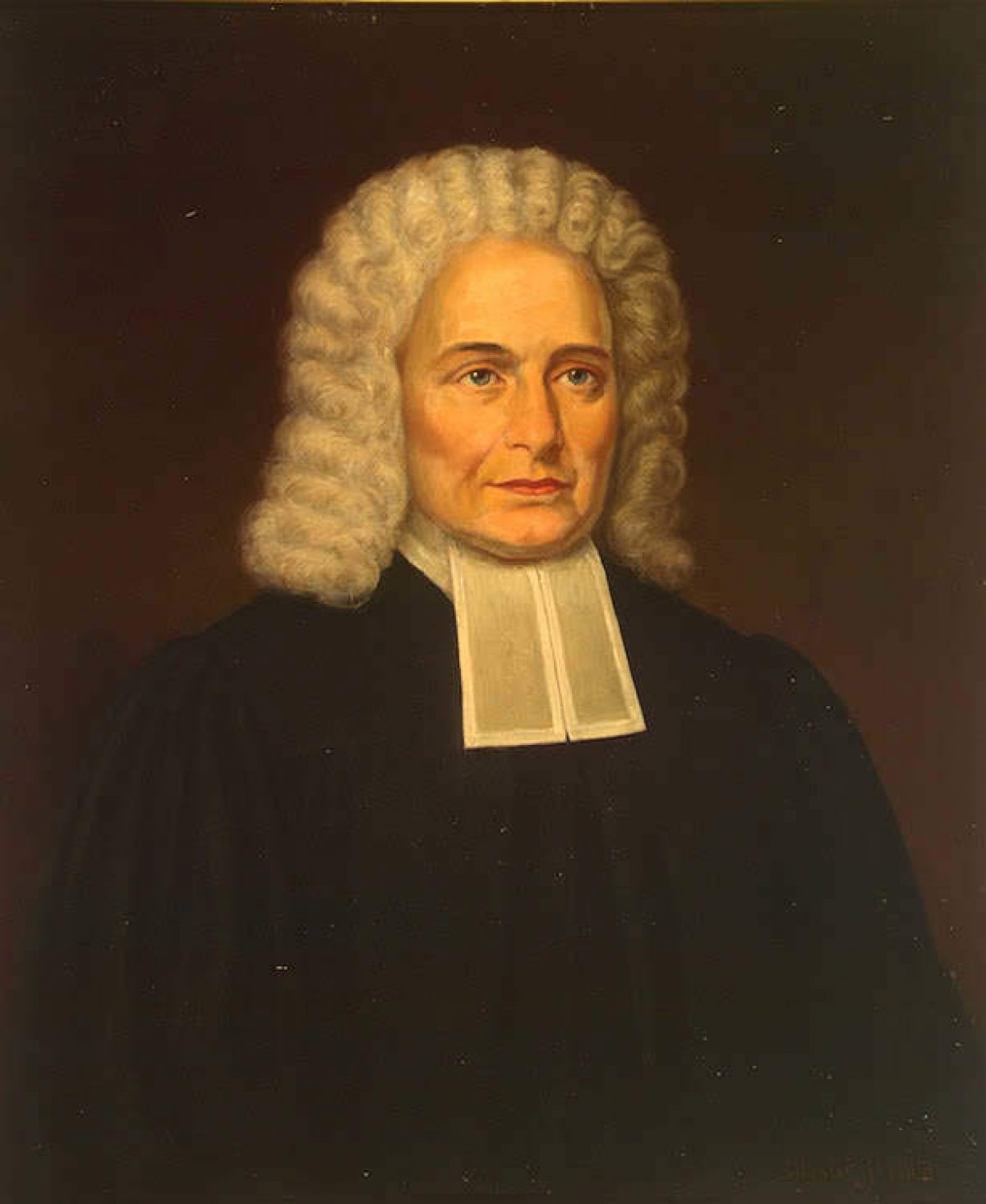 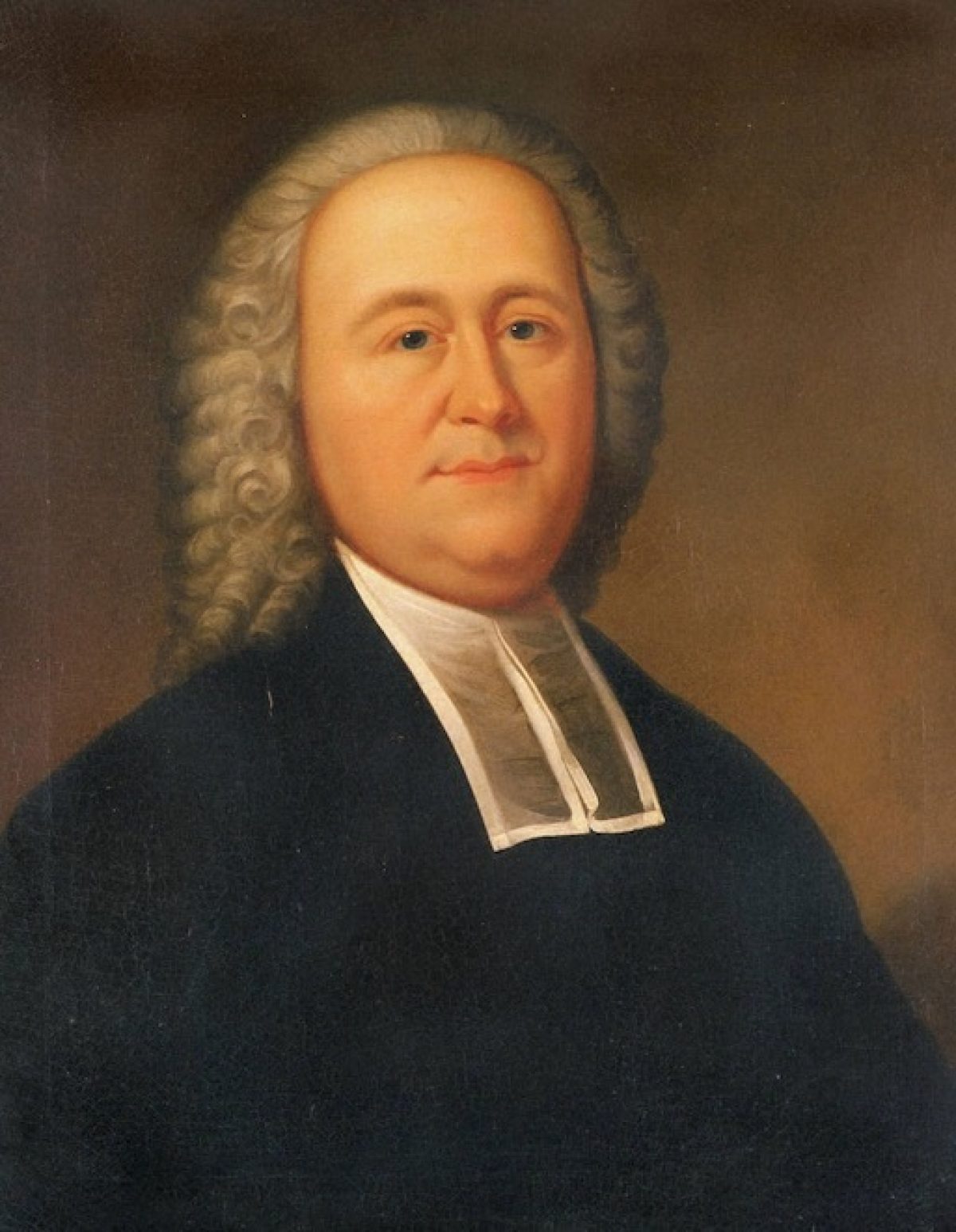 An undated portrait of Gilbert Tennent, who traveled with Samuel Davies to England, Scotland, and Ireland on a fundraising mission.

This database includes a spreadsheet of donors from the two major fundraising efforts to move the College of New Jersey to Princeton and construct Nassau Hall.

The spreadsheet includes the name of donor, date of donation, amount or nature of contribution, and additional resources, and should prove helpful to researchers looking to build upon the work of this exhibit. 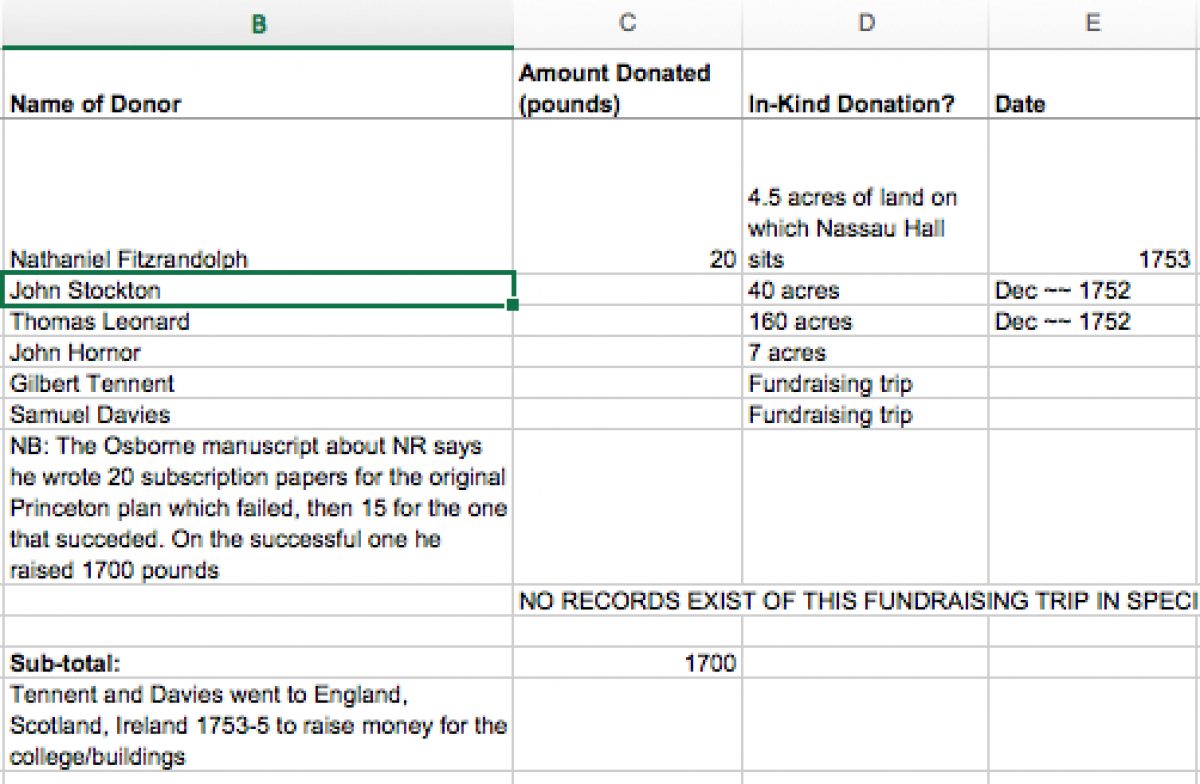 A spreadsheet of donors who funded the construction of Nassau Hall, including their links to slavery.

Ryan Dukeman is a 2017 graduate of Princeton's Woodrow Wilson School, with minors in American Studies & French. His work focused on American and comparative political development, historical institutionalism, and international trade politics. Ryan was in the 2016 Princeton & Slavery Project undergraduate seminar, where his research explored the early funding sources of Princeton and their ties to slavery, as well as those of Princeton's endowed professorships.

View all stories by Ryan Dukeman »

Samuel Davies, Sermons on Important Subjects, by the Late Reverend and Pious Samuel Davies, A.M. Some Time President of the College in New Jersey(Boston: Lincoln & Edmands, 1810), 126.

The low estimate of £3,000 comes from Pilcher, The Reverend Samuel Davies Abroad, ix.