Princeton and the Colonization Movement

Founded and supported by 19th-century Princeton alumni, the American Colonization Society promoted the repatriation of freed slaves to a colony in Africa. Ultimately, however, colonization was more of an intellectual movement for moderately antislavery whites than a practical option for free blacks.

After the Revolutionary War, many Americans (including some slaveholders) readily acknowledged that slavery was incongruous with the purported principles of their new republic.[1] Some manumitted their slaves rather than continue with the hypocrisy. Others supported legislative initiatives to encourage the gradual emancipation of slavery. But many also feared that newly emancipated people would threaten the economic and social hierarchies of their communities—not to mention encourage those still enslaved to seek their own freedom. They therefore reasoned that free blacks would, one way or another, have to leave the United States. With British abolitionists already trying to establish a colony for free blacks in present-day Sierra Leone, a few prominent American statesmen and reformers took note and began their own movement to build a colony for free blacks on the coast of Africa.[2]

Members of the Princeton community were largely responsible for spearheading the colonization movement in the United States. In that regard, the mind behind the colonization movement was a slaveholder from Virginia named Charles Fenton Mercer (class of 1797). Mercer worried that former slaves would be a drain on public resources and a threat to the prevailing social order. Indeed, like many other slaveholders, he was deeply concerned that free blacks would initiate a race war, as had recently occurred in Haiti. In addition, Mercer contended that white racism would prevent blacks from ever being able to achieve upward mobility in the United States.[3] In his view, then, it seemed that the best option—and certainly the safest for white Americans—would be sending free blacks to Africa, where they could establish their own society. 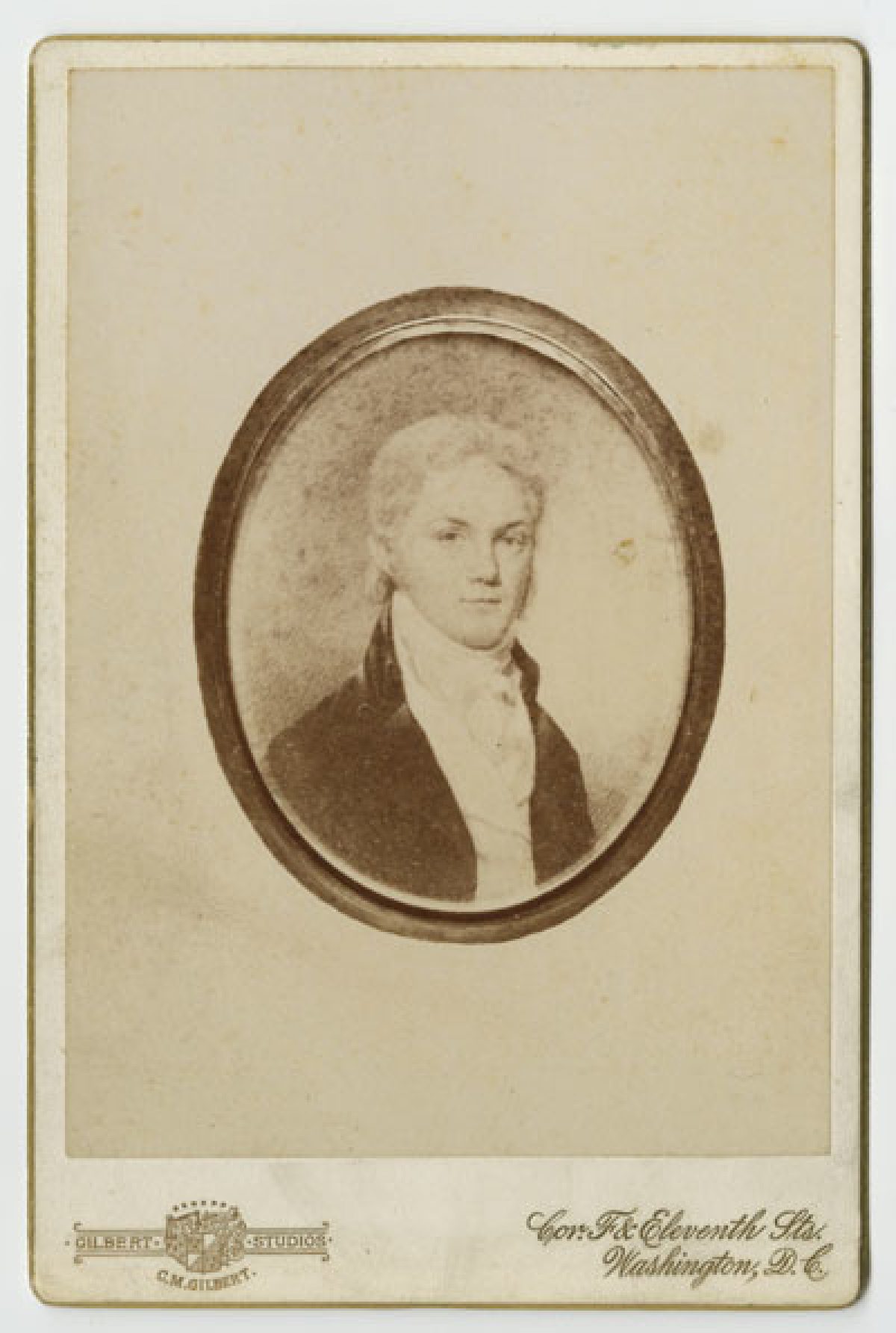 Portrait of Charles F. Mercer ('1797), a founder of the American Colonization Society.

Mercer enlisted associates from Princeton to assist with his endeavor. In 1816, he asked his friend Elias B. Caldwell (‘1796) to pitch the colonization idea to his brother-in-law Rev. Robert Finley (‘1787), then the director of the Princeton Theological Seminary. Finley was enthusiastic about the colonization idea because he believed that slaveholders would be more willing to manumit their slaves if they could then send them away.

In December 1816, Finley met with Mercer, Caldwell, and John Randolph (another associate from Princeton) in Washington, D.C., to launch the American Society for Colonizing the Free People of Colour of the United States—also known as the American Colonization Society, or ACS. U.S. Attorney General, Richard Rush (‘1797), also attended that first ACS meeting. And although Supreme Court Justice Bushrod Washington was elected to as the first president of the ACS, most credited Finley—who would die in 1817—as the society’s genuine founder.

In the ACS, many purportedly antislavery Americans believed that they had found a feasible, humane, and long-term solution to the problem of slavery—one that would, moreover, appeal to both slaveholders and non-slaveholders alike. Those who wished to gradually abolish slavery claimed that the colonization of free blacks would encourage slaveholders to voluntarily emancipate their slaves, as the newly-freed people would not have to remain in the country (let alone in the vicinity of slaveholding communities). In that sense, the colonization movement would provide a safeguard for domestic slavery to continue indefinitely without the presence of free blacks to threaten the system and upset the racial hierarchy. Both slaveholding and non-slaveholding members of the ACS also argued that the creation of a colony would spread Christianity to Africa, discourage the African slave trade, and enable Africans and African Americans to demonstrate their capacity for self-governance.

Shortly after helping to found the ACS, Mercer began a long tenure in the U.S. House of Representatives, where he continued to support the nascent colonization movement. Mercer joined with other allies in the federal government to achieve his various goals. In the Senate, one of Princeton’s most active alumni, Samuel Southard of New Jersey (‘1804), became an ardent proponent of colonization. “Humanity and justice,” he exclaimed in 1830, “exult in the belief, that the gradual emancipation of the slave, and the restoration of the free to the land of their fathers, may yet afford a remedy [to the evil of slavery].”[4] Secretary of the Navy Smith Thompson of New York (‘1788) also supported colonization. In 1820, President James Monroe put Thompson in charge of enforcing a new law that Congress—under Mercer’s leadership—had passed to free foreign slaves brought illegally into the United States.[5] Thompson promptly partnered with the ACS to begin repatriating victims of the illegal slave trade.[6] 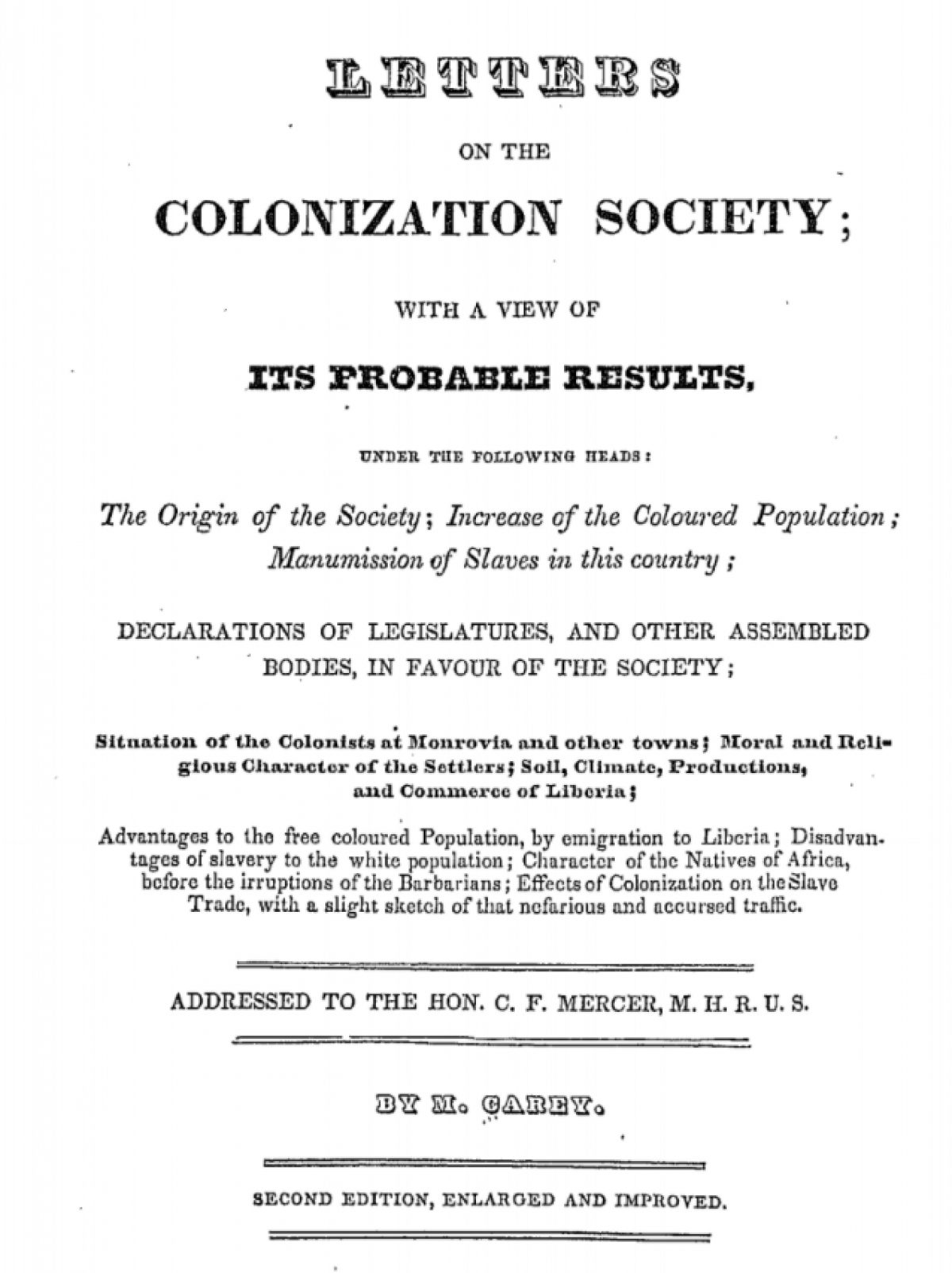 Pamphlet supporting the American Colonization Society, published in response to "the ardent opposition" of "some of our white citizens, and by a number of the free coloured population."

Despite aid from white supporters and government officials, the actual colonization process began inauspiciously. The first black colonists sailed from New York to Africa in 1820, settling on the marshes of Sherbro Island, which lacked potable drinking water. Within six months, 49 of the 86 colonists had died, forcing the remainder to flee to Sierra Leone.[7] The managers of the ACS, however, were undeterred. They tasked Robert F. Stockton, a young lieutenant in the U.S. Navy, with finding a viable site for a new colony when he sailed to Africa to suppress the slave trade.

Stockton was hardly a chance pick for this mission. As a member of the prominent Stockton family of Princeton, New Jersey, he was well-known to all the managers of the ACS, especially those who had attended the college. And so, in 1821, Stockton sailed to Cape Mesurado, then populated by roughly 200,000 members of the Mamba and Dey peoples. As legend has it, he leveled a gun to the local king’s head and forced him to sell the ACS a 200-mile long strip of coastline. This land would form the basis for the ACS’s new colony, dubbed “Liberia” in 1824. By 1830, Liberia had a population of 3,000 black colonists, who had built some 400 farms and six schools.[8] 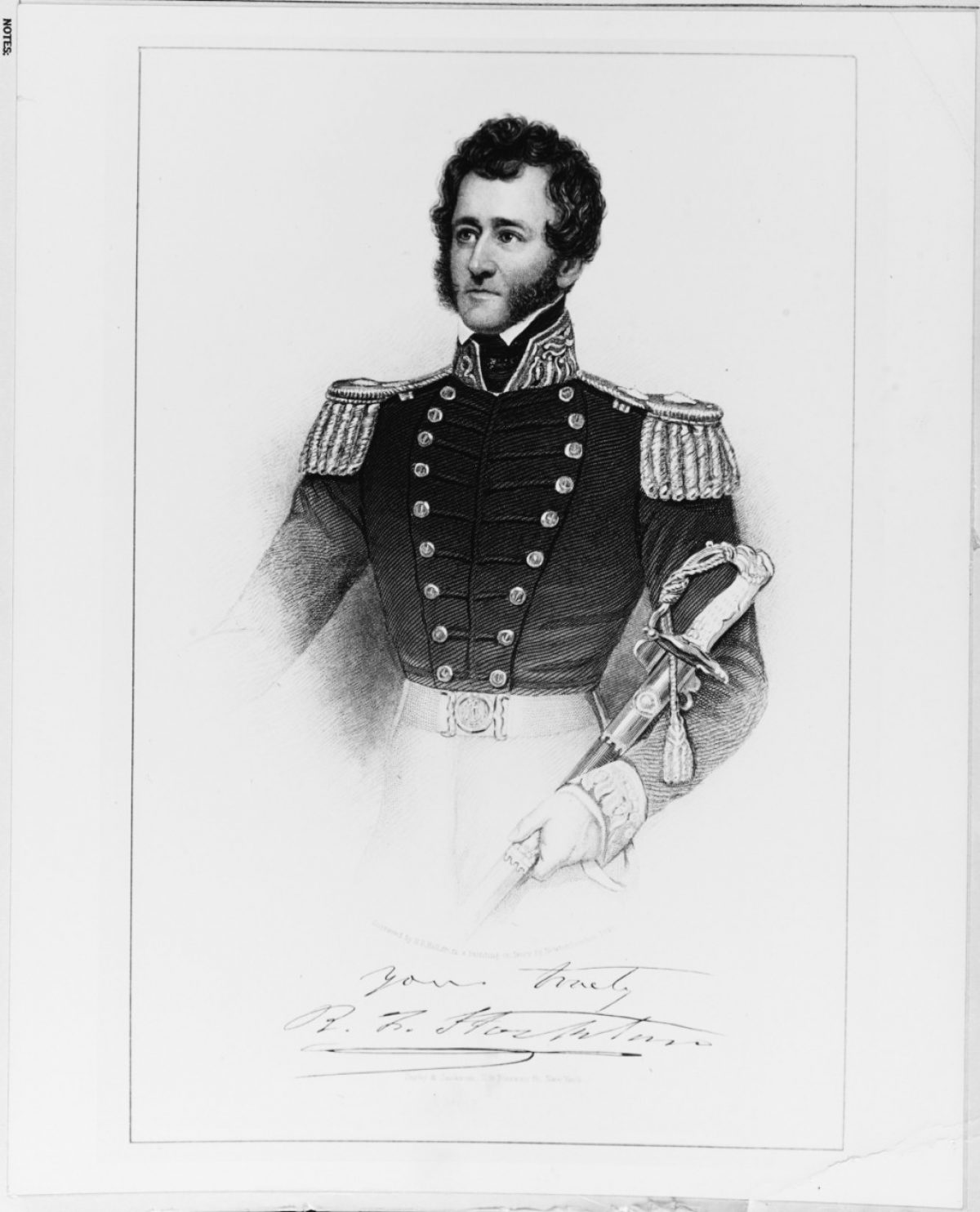 Engraved portrait of Robert F. Stockton, an officer in the United States Navy who acquired the territory that would become Liberia on behalf of the American Colonization Society.

In the meantime, Princeton—along with its college and seminary—remained a hotbed of the colonizationist thought. In 1824, Stockton assumed the presidency of New Jersey’s state chapter of the ACS, which (not surprisingly) was based in the town. Stockton would vigorously lobby for the colonization movement throughout his distinguished naval and political career. In 1850, for instance, as tensions mounted between the North and South over the spread of slavery westward, he proclaimed:

Let the great heart of Christian benevolence in the North and the South unite in selecting…the proper subjects to be sent upon the mission of redemption to the land of their ancestors, until the last slave shall have departed.[9]

But perhaps the most active participant in New Jersey’s chapter of the ACS was John Maclean Jr.—the college’s devoted professor, administrator, and eventual president. Maclean held several positions at the ACS, including the presidency of the New Jersey chapter. And during his long affiliation with the society, he raised money for voyages, corresponded with political and theological leaders, and recruited new adherents to the movement from the college’s student body and faculty. 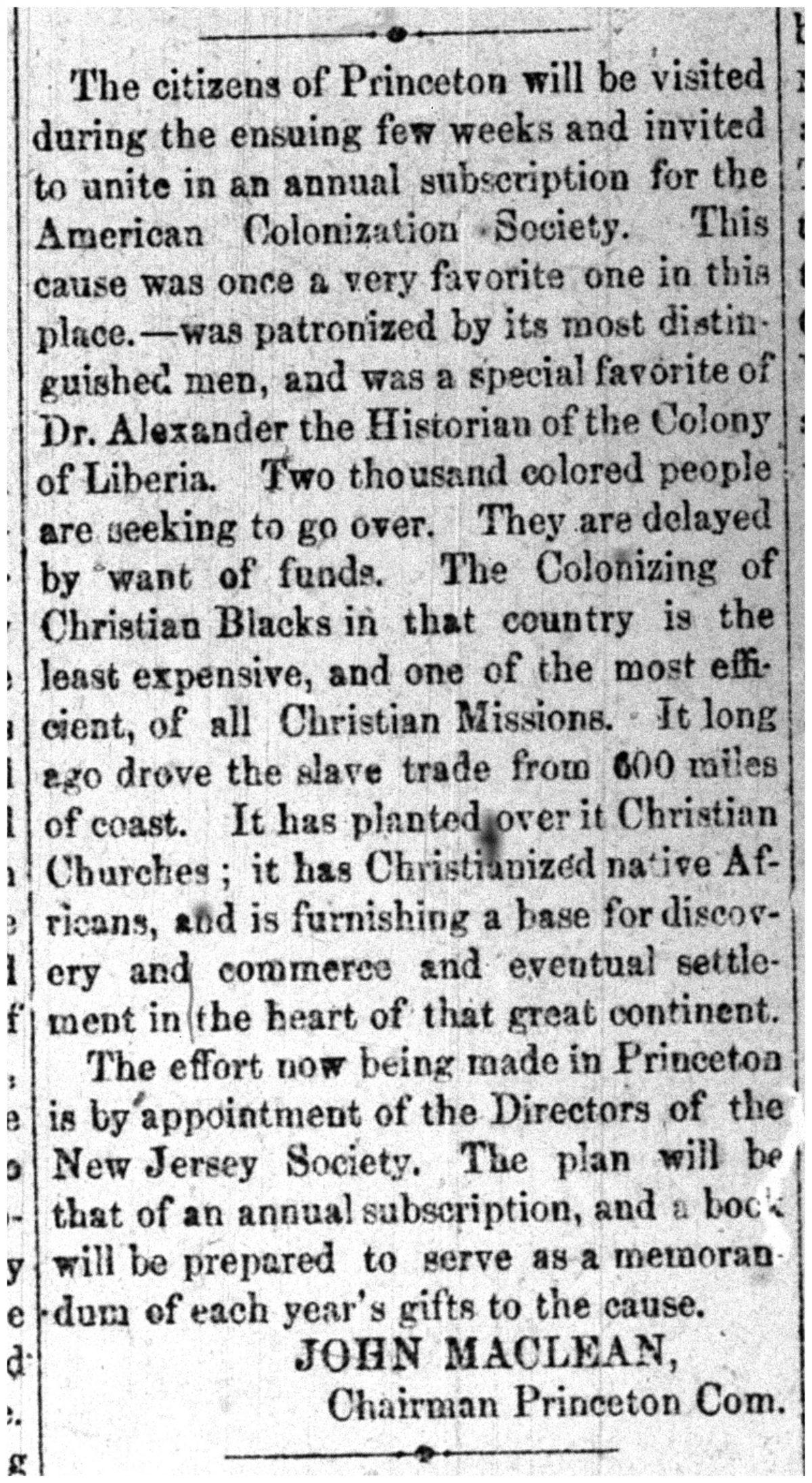 A fundraising notice placed by John Maclean Jr. in 1874, in support of the New Jersey branch of the American Colonization Society.

Due to the efforts of many Princeton affiliates, the colonization movement became extraordinarily popular—especially among the white population of the mid-Atlantic region. Free blacks, however, felt little affection for African colonization. The vast majority of them having been born in the United States, they considered the country their home the same as white Americans’. Furthermore, most free blacks realized that colonization would actually make it easier for slavery to continue in the United States rather than hastening its disappearance, as some supporters claimed. The ACS chapter in New Jersey seemed particularly determined to reinforce slavery’s presence in the United States.[10]

In the end, only about 10,500 black Americans—around 200 of them from New Jersey—emigrated to Liberia during the entirety of the antebellum period. Ultimately, colonization was more of an intellectual movement for whites than a practical option for free blacks.

Craig Hollander is an assistant professor of American history at The College of New Jersey. Before joining the TCNJ faculty, Professor Hollander was the Behrman Postdoctoral Fellow in the Department of History at Princeton University. His dissertation, titled "Against a Sea of Troubles: Slave Trade Suppressionism During the Early Republic," won both the 2014 C. Vann Woodward Prize from the Southern Historical Association and the 2014 SHEAR Dissertation Prize from the Society for Historians of the Early American Republic. Professor Hollander’s manuscript is under contract with the University of Pennsylvania Press for publication in the Early American Studies Series.

View all stories by Craig Hollander »

Take Robert W. Finley, for example. Born in Pennsylvania in 1750, he graduated from Princeton during the presidency of the revered John Witherspoon and remained at the institution for two or three more years to study theology and teach foreign languages. After attaining his ministerial license, Finley traveled through North Carolina, South Carolina, and Georgia to establish new churches. In 1780, he married a Rebecca Bradley of North Carolina, whose father and brothers were killed during the Revolution. Consequently, Finley became the executor of his father-in- law’s estate, which included 14 slaves. He then moved with his family to Kentucky. Finley’s son, James B. Finley, recalled that his father “treated his slaves with great tenderness—more like children than servants. He never punished one of them.” “I have often thought,” he added, “that slavery existed in my father’s family only in form.” Eventually, Finley ended this involvement in “form,” too. In 1796, he emancipated his slaves and offered to take them to Ohio with support for one year. According to his son, he “had been for years convinced that it was wrong to hold his fellow-men in bondage, and thus deprive them of their natural rights; and he was particularly impressed with the belief that there could be no civil regulation authorizing the possession of human beings as goods and chattels, that would justify a minister of the Gospel in living upon the sweat, and blood, and tears of his fellow-beings.” (Quotes from James Bradley Finley, W. P. Strickland, D. D. (ed.), Autobiography of Rev. James B. Finley: Or, Pioneer Life in the West (New York: Hunt and Eaton, 1853), 35, 110.) 2 Thomas Jefferson inquired whether the United States could send blacks to the British colony of Sierra Leone. The British rejected Jefferson’s proposal out of fear that the United States was merely interested in unloading unruly elements onto their fragile colony. For more, see: Allan Yarema, The American Colonization Society: An Avenue to Freedom? (Lanham, MD: University Press of America, 2006), 5.

Thomas Jefferson inquired whether the United States could send blacks to the British colony of Sierra Leone. The British rejected Jefferson’s proposal out of fear that the United States was merely interested in unloading unruly elements onto their fragile colony. For more, see: Allan Yarema, The American Colonization Society: An Avenue to Freedom? (Lanham, MD: University Press of America, 2006), 5.

For a thorough examination into Mercer’s reasoning, see: Douglas R. Egerton, “‘Its Origin Is Not a Little Curious’: A New Look at the American Colonization Society,” Journal of the Early Republic 5, No. 4 (Winter 1985): 463-480.

For example, in July 1820 Thompson contacted two leaders of the Colonization Society to ask whether they would provide transportation to Africa for several liberated slaves in the United States. (Smith Thompson to John Mason & Francis Scott Key, July 7, 1820, P. 1; Correspondence of the Secretary of the Navy Relating to African Colonization, 1819-1844, M205, Roll No. 1; National Archives Building, Washington, D.C.)

James Gigantino II, The Ragged Road to Abolition: Slavery and Freedom in New Jersey, 1775-1865 (Philadelphia: The University of Pennsylvania Press, 2015), 188.