Counting Princetonians in the Civil War

Extensive research by the Princeton University Archives staff has determined that over 600 Princeton students and alumni fought in the Civil War. Of these, 86 died in the conflict—47 for the Confederacy, and 39 for the Union.

The history of the Nassau Hall Memorial Wall as it relates to the Civil War is well told in Richard Anderson’s “Princeton’s Civil War Memorial.” However, the total number of Princeton students and alumni who served and died in the war has been a long-standing question. Thanks to extensive research undertaken by Princeton University Archives staff, we not only know that the Memorial Wall is inaccurate (there were more deaths and more Confederate deaths than previously believed), but also have a fuller understanding of all those from Old Nassau who served in any capacity for either side during the Civil War.

In order to compile this information, Special Projects Archivist Kristen Turner, with assistance from Ada Rauch (‘17), reviewed all of the individual undergraduate alumni files from the classes of 1830 through 1872—in particular the four-page biographical sheets that were created and collected to publish the 1906 General Catalogue.

Each biographical profile contains a section for military service, and when information was listed there (or occasionally found elsewhere in the file), Turner and Rauch conducted additional research to confirm or disprove details. The most useful online sources were the American Civil War Research Database and Find A Grave, the latter of which frequently includes photographs of headstones. Reunion books and class histories (when extant) sometimes provided supporting information as well. In instances with uncertain or contradictory information, even further research would be done with both paper and online resources, but some stories remain inconclusive. 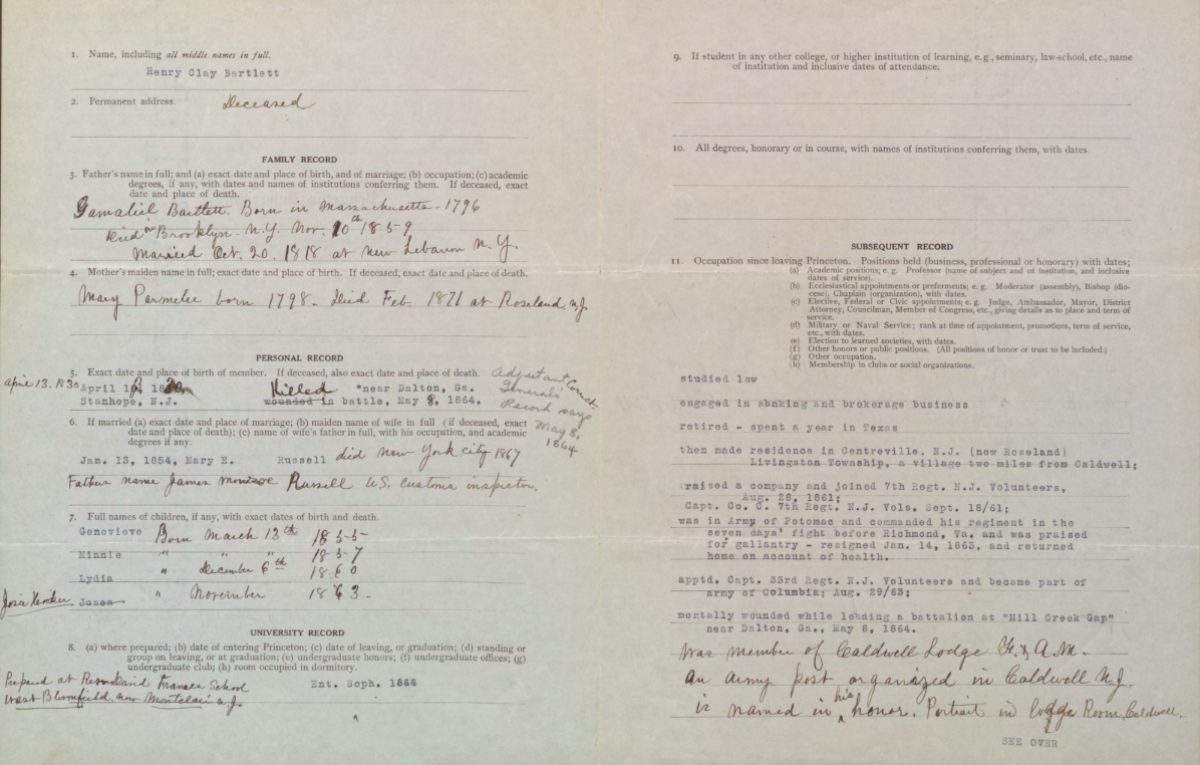 General Biographical Catalogue entry for Henry Clay Bartlett (class of 1847), a Union Army soldier who died during the Civil War.

In our spreadsheet, data collected for each student includes: class year, graduation status, the side and state for whom they fought (when available), type of service (soldier, sailor, medic, clergy, field staff), death date, and service record details.

The final tabulation reveals that over 600 Princeton students and alumni fought in the Civil War, and that 86 died in the conflict. Sixty-two of those 86 are currently listed on the wall, but for eight of the students named on the wall we found no conclusive evidence that they either fought (2) or died (6) during the war. For our purposes, we counted a war death as someone who passed away within one year of his injury. On the wall, however, at least two men died more than four years after their war injuries and were counted as war dead. Of the 86 Princeton alumni who perished during the Civil War, 47 fought for the Confederacy and 39 for the Union. These numbers reflect, in part, the Princeton and Slavery Project’s findings that the institution was sympathetic to those who supported slavery, and ultimately secession, from its early years to the Civil War.

How to Read the Database

The Excel spreadsheet that can be downloaded below contains three sheets:

The first sheet, “Memorial Wall,” lists the names of those who served and died in the Civil War. It contains 12 columns listing the student or alumnus’ name, class year, graduation status, the side they served (USA or CSA), kind of service, state served, memorial wall status, death date, death information, service record, and notes. The memorial wall status field on this sheet has two possibilities: “MW Yes” or “MW Addition.” “MW Yes” means that the person’s name is currently listed on the memorial wall and evidence confirms that they did in fact die during the conflict. “MW Addition” denotes that the person is not currently listed on the wall but evidence supports their inclusion or addition to the wall.

The second sheet, “Remove from the Wall,” lists eight individuals currently named on the wall for whom we can find no evidence of military service or death during the Civil War.

The third sheet, “Served,” lists those students and alumni for whom there is evidence of military service during the war, but who survived or whose death is not clearly related to their service. It contains the same 12 columns as sheet one, but highlighted fields with capitalized comments note when information is sketchy or unavailable. These notes are most commonly found in the column for state served, type of service, or death date. 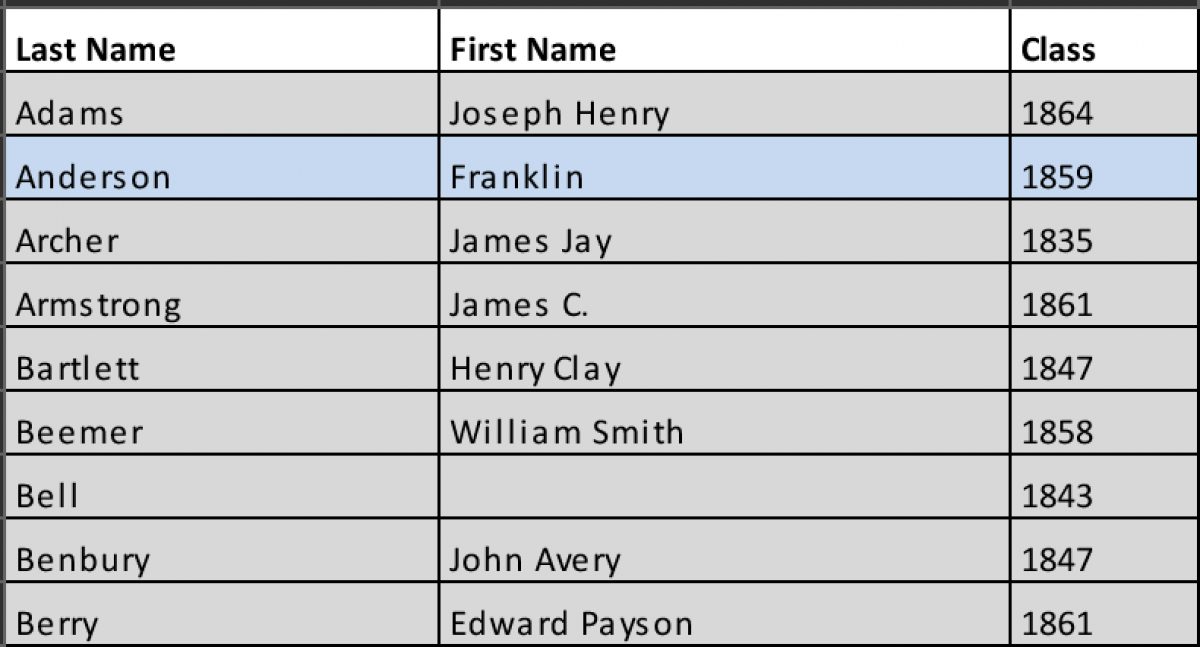 Click through for full database of more than 600 Princeton alumni who served and died in the Civil War. More than half of them fought for the Confederacy.

Daniel J. Linke received bachelors and master’s degrees from Case Western Reserve University in Cleveland, OH, and worked at three other archival repositories including the University of Oklahoma, and the New York State Archives before arriving at Princeton University in 1994. First serving as the Seeley G. Mudd Manuscript Library’s assistant archivist, he was promoted in July 2002 to his current position, the University Archivist and Curator of Public Policy Papers. As head of the Mudd library, he is responsible for collection development and oversees the library’s public service and technical service work as well.

Share this Story:
Did You Know...?Dozens of runaways resisted slavery in Princeton and beyond. Read More