Nassau Hall’s memorial atrium—built in the 1920s—reflects the era’s reconciliationist politics, erasing the role of slavery and emancipation in the Civil War and granting moral equivalency to the Union and Confederate causes.

Visitors to Princeton University’s historic Nassau Hall pass through its front doors and immediately encounter the solemn, austere Memorial Atrium. Carved into the room’s white marble walls, the memorial lists the names of Princeton students and alumni killed in American wars—representing in three dimensions one way in which Princetonians endeavored to live out what for many years served as the university’s informal motto, "In the Nation's Service and the Service of All Nations."[1] Yet the seventy names on the Civil War tablet bear no marker of which nation these Princeton men died for: the Union, or the Confederacy. The nearly century-old memorial symbolically buries the causes of the war along with the war dead, reflecting the politics of Civil War commemoration at the time of its creation in the 1920s. It also exemplifies the continuing struggle of both Princeton University and the United States to confront the full meaning of the Civil War and the system of human slavery at its center. 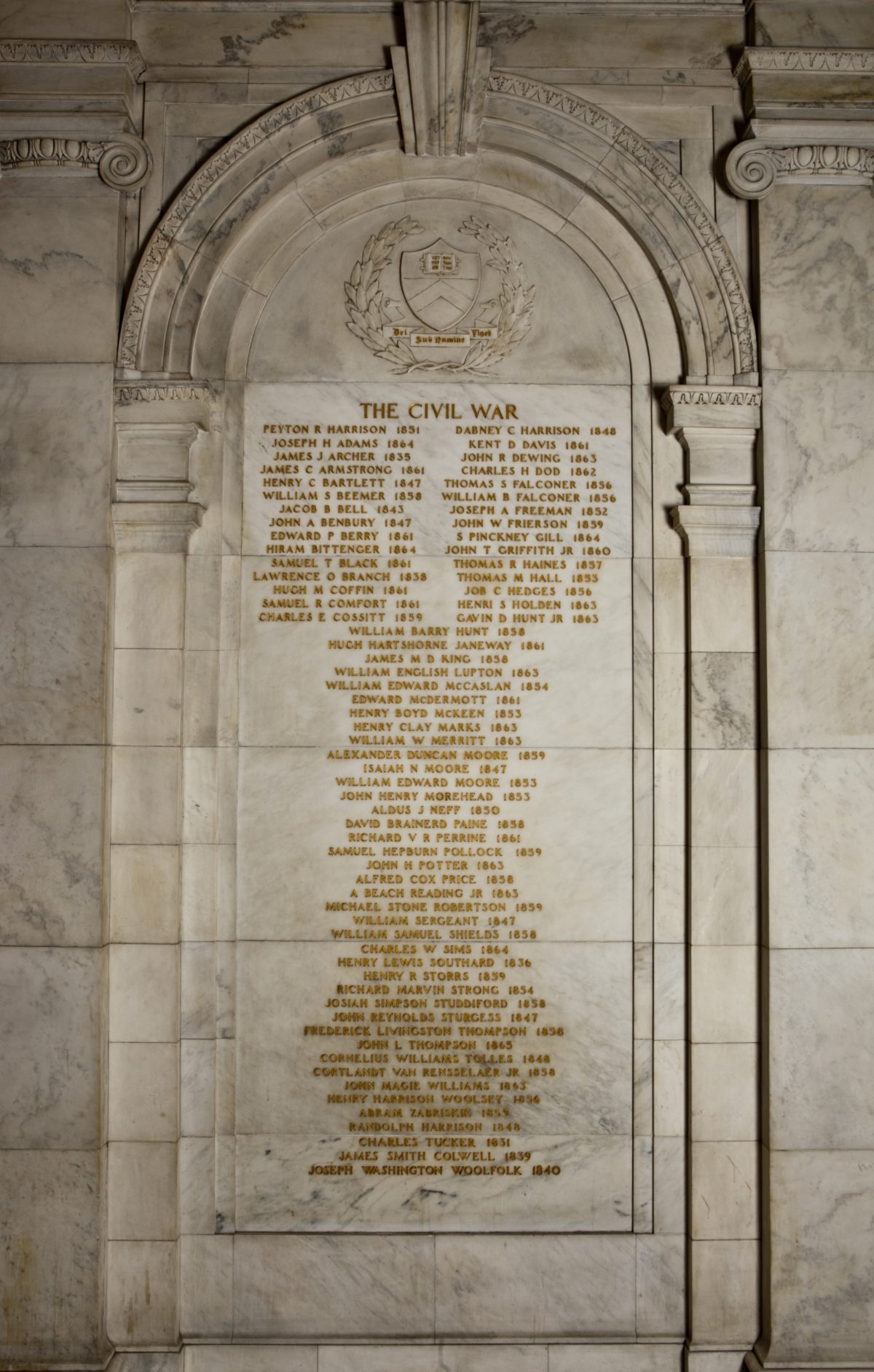 Photograph of the Civil War Memorial in Nassau Hall.

The Civil War and the preceding “sectional conflict” over slavery posed a unique challenge for Princeton. During the antebellum period, Southern students comprised a large proportion of the college’s student body—often exceeding 50% between 1790 and the Civil War.[2] The geographic diversity of students and faculty lent Princeton the air of a national institution, as did the college’s deep history of Revolutionary War activity. Princeton therefore attempted to navigate a middle path between the two sides of the looming conflict between North and South. The outbreak of war, however, destroyed the college’s attempts to transcend sectional and political divisions. Princetonians entered battle against one another: more than 600 students and alumni enlisted in the Union and Confederate armies, with more than half fighting for the latter.[3]

Princeton and other northern colleges moved to honor their war dead in the first decade after the war ended, with many of the initial tributes pointedly excluding Confederate soldiers. In December of 1865, for example, Princeton decided to create an honor roll of all students and alumni who had served in the Union Army.[4] And a memorial service for Princeton’s Civil War dead held by university trustees at First Presbyterian Church consciously recognized and celebrated only the Union cause.[5] The oration by Reverend Joseph Duryea framed the service as an effort to “render suitable tribute to” students and alumni “who were connected to the army of the country.”[6] While Duryea did not allude to the emancipatory consequences of the war, he took pains to distinguish between the two sides and valorize only the Union effort:

The due appreciation of the inestimable worth of the Union must be secured by renewed consideration of the agony and sacrifice it cost to save it.[7]

Duryea noted that many members of the university community came from “disloyal States, and from the ranks of the insurgent army” and acknowledged that the service “commemorate[ed] the restoration of the Union in presence of those who sincerely sought to effect its dissolution.”[8] The reverend argued against blurring the lines between the Union and Confederate causes. “We do believe it noblest in us all,” Duryea said, “to look honestly upon the past and stand squarely up to our position.”[9] This was the tenor of commemoration in the immediate aftermath of the Civil War. In response, one Confederate alumnus lamented that the university administration “thought it necessary to emphasize their loyalty to the Union in a way that exasperated all ardent Southerners like myself.”[10]

Princeton’s response to the war was not unique. In 1866 Brown University dedicated a tablet to its twenty-one Union casualties. Eight years later Harvard built Memorial Hall to honor the 176 students and alumni killed fighting for the Union.[11] These early commemorations at Princeton and elsewhere illustrate that college officials clearly distinguished between the two sides. Even institutions like Princeton—which had remained decidedly ambivalent about abolition and slavery in the years leading up to the war—elevated the moral and political legitimacy of the Union’s cause above the Confederacy’s.

Public memory of the Civil War at Princeton and across the country did not remain frozen in time, however. Memorialization changed to reflect the prevailing political sentiments of the moment. Early commemorations had occurred during the Reconstruction period, when the meaning of the war and its outcome remained bound up with the promise of political and economic rights for former slaves—a process enforced through military occupation of the South. But the demise of Reconstruction, the “redemption” of former Confederate states, and the advent of Jim Crow segregation steadily erased the legacy of emancipation during the last quarter of the 19th century. Likewise, a powerful “Lost Cause” mythology celebrated the Confederacy and presented it as morally equivalent to the Union. Americans began describing the Civil War as a shared trauma in which all combatants were unified by their common sacrifice and valor. By the time the United States observed the war’s semi-centennial in 1915, the “dominant mode of memory was reconciliation” between North and South.[12] Such sentiments infused Princeton’s tribute to Civil War casualties in Memorial Atrium.

World War I provided the immediate impetus for the creation of the Memorial Atrium. In the spring of 1919, just months after the Great War ended, university trustees approved plans to construct a grand memorial room in the center of Nassau Hall. A War Memorial Committee had considered a new building for the memorial, but chairman and alumnus Moses Taylor Pyne (class of 1877) argued persuasively that the campus already featured “a building which is richer in historical associations and fame than any other university building in America, or than any which we could erect.”[13] The university would honor its most cherished alumni in its most hallowed building.

When Princeton dedicated the Memorial Atrium on February 21, 1920, the marble walls bore only the names of World War I casualties. Initial plans for adding a commemorative tablet for the Civil War dead imagined grouping the names according to Union and Confederate affiliations. President John Grier Hibben rejected the idea. “No, the names shall be placed alphabetically,” Hibben declared, “and no one shall know on which side these young men fought.”[14] The resulting monument may be the only one in the United States to include the names of Union and Confederate casualties without noting the cause for which they died.

The university began inscribing the names of Civil War dead, with Blue and Grey commingled, sometime around 1923.[15] The tablet initially included only sixty-two names, but the university’s records were incomplete. Over the next sixteen years additional research yielded eight more names that were inscribed on the tablet. Of the seventy total names, the two sides are evenly represented on the tablet at thirty-five each. Recent research by Princeton University Archives staff, however, has revealed that eighty-six alumni died in the Civil War, forty-seven of them for the Confederacy and thirty-nine for the Union.

The Memorial Atrium tablet was not the only Civil War commemoration to receive funding from Princetonians in the 1920s. In 1924 the Princeton National Alumni Association donated $1,000 to the Confederate Monument Association to aid the completion of a memorial depicting Confederate leaders Stonewall Jackson, Robert E. Lee, and Jefferson Davis at Stone Mountain, near Atlanta. The Alumni Association had held its annual meeting in Atlanta in March of 1924, with a schedule of events that included a trip to the Stone Mountain site for an address by sculptor Gutzon Borglum, who designed the memorial bas relief and would go on to carve Mount Rushmore in South Dakota. One week after the Atlanta meeting adjourned, the Alumni Association announced its donation to the Confederate Monument Association.

Stone Mountain—the location of the founding of the second Ku Klux Klan nine years earlier—was rich in white supremacist symbolism, and upon its completion the Confederate Memorial Carving served as a stark symbol of resurgent southern pride and a vivid public expression of the Lost Cause mythology.[16] The gesture by the Alumni Association reflected both Princeton’s historic ties to the South and the contemporary repudiation of the emancipatory consequences of the Civil War for African Americans. Together with the opening of Memorial Atrium, the donation illustrated how Princeton’s students, alumni, and administrators in the 1920s resisted a full reckoning with the meaning of the Civil War and the longer history of slavery in which the university had played an integral role.

Richard Anderson is a doctoral candidate in twentieth-century American political, urban, and labor history. His dissertation examines urban machine politics and American liberalism in Chicago between 1945 and 1966. From 2011-2014, Richard coordinated the Public History Initiative, a working group within the Princeton History Department. He sits on the Committee on Advocacy of the National Council on Public History and co-edits the NCPH blog, History@Work. In 2014 Richard served as a research resident at the National Public Housing Museum in Chicago. He is currently a member of the Princeton Public Library’s Humanities Council. Richard received a B.A. in history from Northeastern Illinois University, an M.S. in journalism from the University of Illinois at Urbana-Champaign, and an M.A. in history (with a graduate certificate in Public History) from the University of Massachusetts Amherst.

View all stories by Richard Anderson »

In April 2016 the Board of Trustees updated Princeton’s informal motto to state: "Princeton in the nation's service and the service of humanity." “Report of the Trustee Committee on Woodrow Wilson’s Legacy at Princeton,” accessed March 13, 2017, http://www.princeton.edu/main/news/archive/S45/97/32G05/Wilson-Committee-Report-Final.pdf.

Rev. Joseph Duryea, “An Oration Commemorative of the Restoration of the Union, with a Tribute to the Alumni and Under-Graduates of the College of New Jersey, Who Fell in the National Struggle: Delivered Tuesday, June 26th, 1866, at the Request of the Trustees of the College” (Philadelphia: McCalla & Stavely, 1866), 10. Italics added.

Maynard, “Princeton In the Confederacy’s Service.”

Craig B. Hollander and Martha A. Sandweiss, “Princeton and Slavery: Holding the Center.”

Maynard, “Princeton in the Confederacy’s Service.”