Joseph Henry spent fourteen years at the College of New Jersey, serving as Chair of Natural History between 1832 and 1846. Sam Parker, his assistant, was a free black man.

Before accepting an appointment in Washington, D.C. as the first Secretary of the Smithsonian Institute, Joseph Henry spent fourteen years at the College of New Jersey (now Princeton University), where he served as Chair of Natural History between 1832 and 1846. During his tenure at Princeton, Joseph Henry taught courses on subjects ranging from natural history and chemistry to architecture, while assembling an impressive physical laboratory in Philosophical Hall.[1] 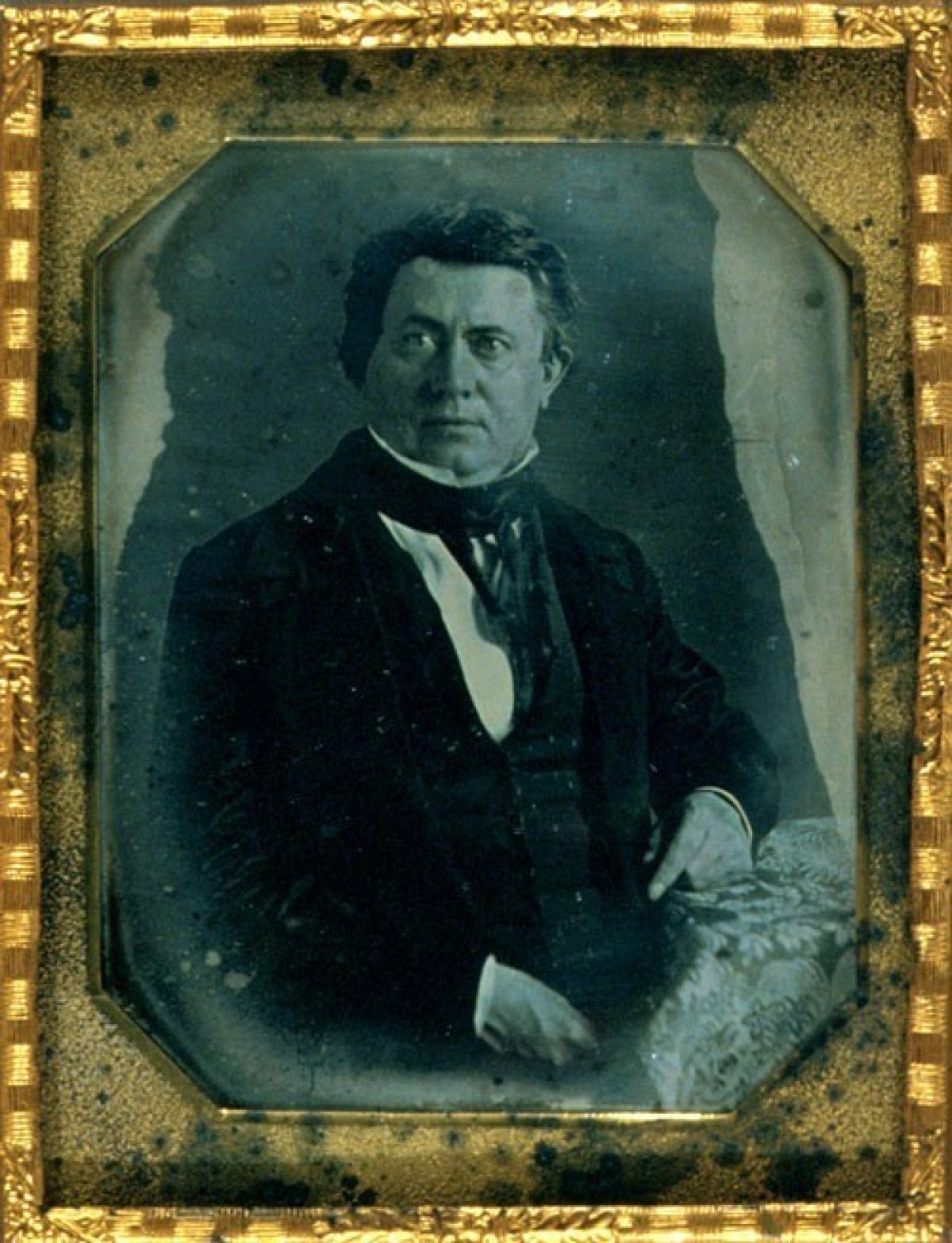 Daguerreotype of Joseph Henry, taken in 1843.

In a letter written to Samuel Bayard Dod in 1876, Henry recalled the “several thousand original investigations on electricity, magnetism, and electro-magnetism” he made while at Princeton, writing: “They have cost me years of labor and much expense.”[2] Following Henry’s death two years later, Dod delivered a memorial address in the college chapel celebrating the former professor as a “great discover” who had ingeniously “devised and in great measure constructed the apparatus with which many of his wonderful discoveries were made.”[3] Henry’s laboratory included several large instruments, among them a galvanic battery with adjustable output, an electromagnet of unprecedented strength, and induction coils of his own devising, but his researches at Princeton were not the work of a self-sacrificing genius. Henry’s laboratory—and the experiments he carried out in it—depended upon the assistance of his mixed-race servant and assistant, Sam Parker.

When Henry came to Princeton in 1832, he had already established his reputation as one of the 19th century’s leading researchers in electromagnetism. But while student memoirs from the 1840s recalled the prototype telegraph the professor operated between his classroom and home (now the Joseph Henry House) with great amazement, Henry’s earliest years at Princeton were scientifically disappointing.[4] Henry lamented that “no lectures had been given […] nor experiments shown to the class for many years,” and considered the laboratory equipment “deficient in quality” and in “a very bad state of preservation.”[5] Henry set about the task of improving Princeton’s research facilities, and in 1840 the college provided the assistance of Sam Parker. As Henry explained in an 1841 letter to mathematician Elias Loomis:

The Trustees have however furnished me with an article which I now find indispensible namely with a coloured servant whom I have taught to manage my batteries and who now relieves me from all the dirty work of the laboratory.[6]

Parker, paid an annual salary of $48, would work in Henry’s laboratory and household for the next six years. His assistance became so critical to Henry’s research that when Parker fell ill for a brief period in June 1842, Henry’s experiments halted entirely.[7]

Parker was responsible for a number of tasks in the laboratory and Henry’s correspondence documented Parker obtaining material for experiments (“Sam my assistant provided a piece of the long gut of an ox”), solving technical issues (“Sam has remedied the defect to day by rolling the pasteboard into a scroll of double thickness”), and occasionally serving as a test subject in Henry’s electrical experiments (“When the discharge was made Sam felt a sever shock up to his shoulders.”)[8] Other individuals, including Henry himself and an unidentified “Mr –”, participated alongside Parker as human galvanometers in these experiments. However, student memoirist Edward Shippen (class of 1845) recalled that students who assisted with Professor Henry’s lecture demonstrations would “insulate” Parker, “snapping sparks from his nose and chin” and Parker “stood for it like a hero, ‘in the interests of science.’”  It is difficult to imagine Henry’s “assistant” had much say in the matter, but Parker did find ways to respond. Having established a bustling trade exchanging second-hand clothing for the turkey dinners he delivered to student dorm rooms late at night, Shippen wrote that Parker “made up for these jokes awfully when he began to bargain with the boys.”[9]

According to Shippen, “Professor Henry’s Sam” was “one of the most important persons in Princeton (according to the Students view).” Describing Parker several times over the course of his memoir, as a “big, very light-colored, shrewd mulatto man,” “a wily mulatto,” and a “supple big yellow man,” Shippen presented an almost mythic account of the free black man rumored to own more than a hundred suits of clothing. Changing his outfit several times each day, Parker was “much pleased with the attention he attracted” and always “passed along the front of North College on his way to the Laboratory.”[10] The Princeton alumnus made no secret of the ambivalence he and other students felt for Parker, writing: “We liked Sam – as an engine – and hated him as a ‘ginger nigger’ who owned 100 suits of clothes, and put on airs.” According to Shippen, Parker became "very docile" after being “thoroughly flailed” by a north Jerseyman. He added, approvingly: “Sam was not however, one of the niggers of the post Rebellion period. He knew exactly ‘when he lived.’”[11]

For his part, Joseph Henry referred to Parker as a “servant” and “assistant” interchangeably—perhaps revealing just how central “the interests of science” were to the way the professor and future statesman understood the world, and how blind he could sometimes be to the world beyond it. Like many Northerners, Henry was an anti-slavery sympathizer who “did not much like the idea of living in a slave state,” though he freely admitted that his political principles alone would not have stopped him from accepting a teaching position in the South.[12] 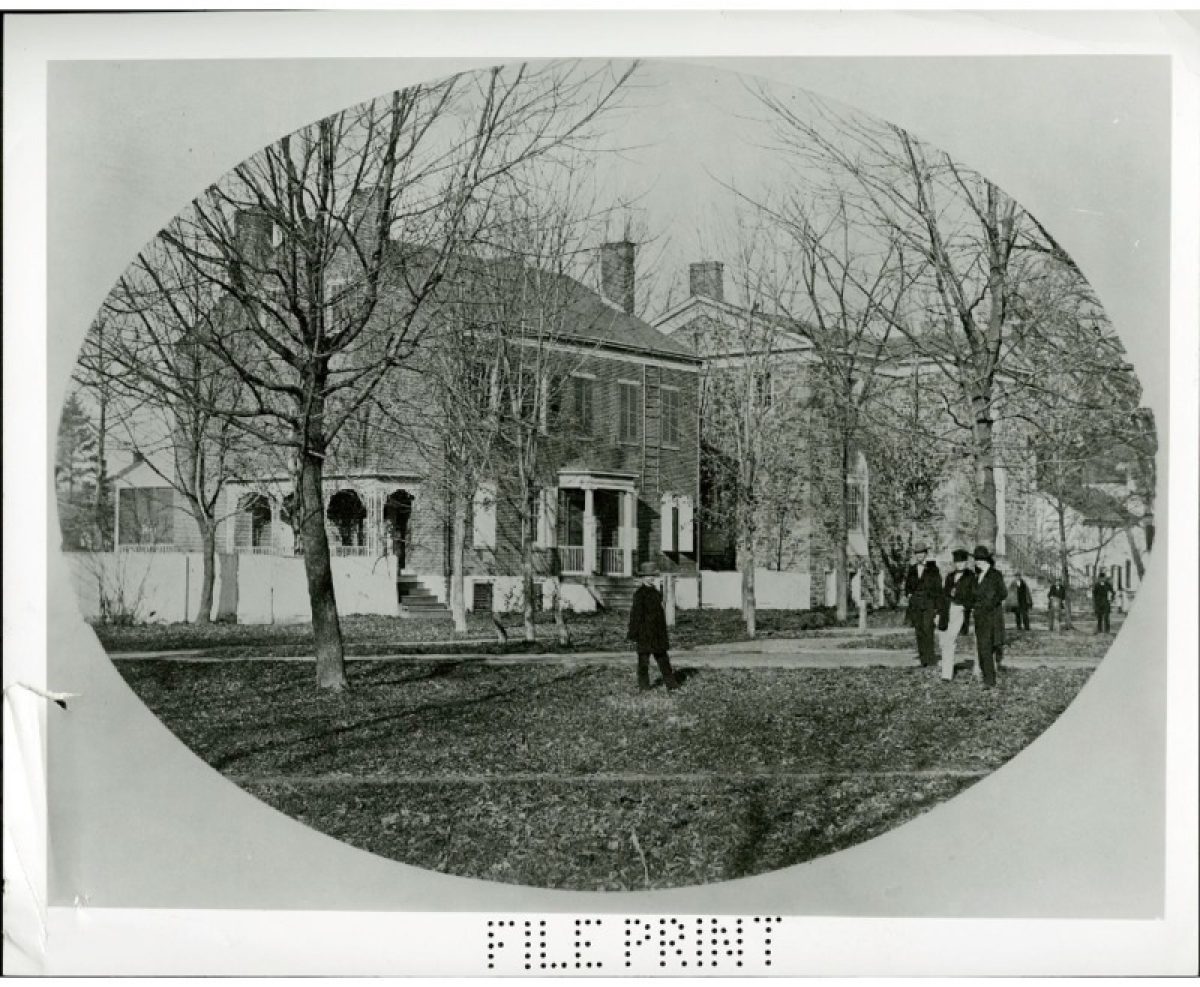 Joseph Henry's home in Princeton, New Jersey. It was to this house that Professor Henry sent telegraphic messages (sometimes to order lunch) from his laboratory in Philosophical Hall.

Like many educated men of his day, Henry believed in the existence of a hierarchy of human races and the impossibility of a racially integrated society, and he actively supported colonization schemes, donating three dollars to the New Jersey Colonization Society in 1839.[13] As late as 1862, Henry wrote to Asa Gray (botanist, Harvard professor, and friend of Charles Darwin) that he was “warmly” in favor of colonization. That same year, when a series of lectures from prominent abolitionists (including Wendell Phillips, Horace Greeley, Henry Ward Beecher and Ralph Waldo Emerson) took place in the Smithsonian auditorium before an audience that included President Lincoln, Henry actively barred Frederick Douglass from speaking, explaining: “I would not let the lecture of the coloured man be given in the rooms of the Smithsonian.”[14]

There is little record of what happen to Sam Parker after the Henry family left New Jersey. Though Parker had been an “indispensible” assistant, his work in Henry’s laboratory was ultimately contingent upon his servitude. The nature of the relationship between Henry and Parker is perhaps expressed most clearly in one of the professor's final references to Parker. In a letter sent to his wife Harriet in January 1847, who remained on campus with their children for a period following his initial departure for Washington, Henry wrote: “I hope Sam is attentive and steady – He must not be allowed to be out at nights now that I am away.”[15]

The vision of Henry as an ingenious inventor and “great discoverer” expressed in Dod’s 1878 memorial address lives on in the Princeton community today. The former professor is memorialized at the Joseph Henry House, by the statue outside the main doors of the Frist Campus Center, and in the murals in Green Hall, painted by Gifford Beal in 1946. Several instruments from Henry’s Princeton laboratory are also displayed in the lobby of Jadwin Hall.  Far less attention, however, has been paid to the free black man who made much of Henry's research possible: Sam Parker. 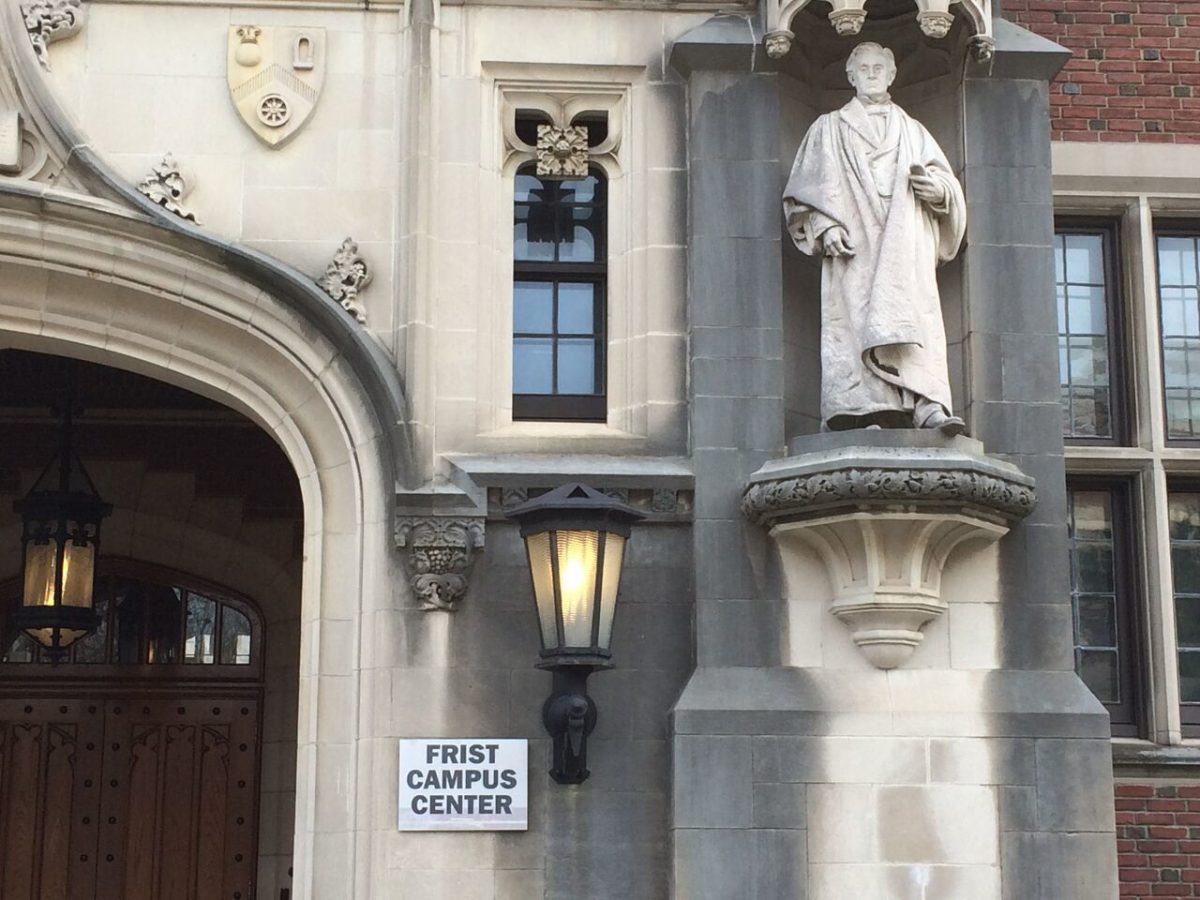 Statue of Joseph Henry on the exterior of Princeton's Frist Campus Center.

View all stories by Julia Grummitt »

“Discourse Memorial by Samuel Bayard Dod. Delivered in the College Chapel, Princeton N. J. on the 19th of May, 1878,” in A Memorial of Joseph Henry, Published by Order of Congress (Washington, D.C.: Government Printing Office, 1880), 143.

Henry refers to Parker as an “indispensable” article especially because of the messiness of working with galvanic batteries, and recommends Loomis use a Daniell constant battery instead. See The Papers of Joseph Henry, Volume 5, ed. Nathan Reingold and Marc Rothberg (Washington, D.C.: Smithsonian Institution Press, 1985), 29.

As he explained in an 1835 letter to his brother James, only his sense of duty to Princeton had prevented him from accepting a lucrative position at the University of Virginia. The Papers of Joseph Henry, Volume 2, 428-9.