Princeton and the Ku Klux Klan

During the early 1920s, Princeton students came into contact with local members of the Ku Klux Klan. Their interactions with the Klan reveal both curiosity about the organization and anxiety about the following it could develop on university campuses.

On October 17, 1924, Princeton welcomed Cambridge University’s debate team to its campus with an evening reception. The Cambridge students had already crisscrossed the northeast, debating university teams and charming audiences with their “wit and repartee.”[1] Princeton students had anticipated their meeting with the Cambridge team with excitement. Though it took place immediately before the senior prom, the competition attracted the largest audience that had ever attended a debate on campus. The prompt for the evening: Is modern democracy inconsistent with individual liberty?[2]

Just the night before, members of a local chapter of the Ku Klux Klan had charged up Nassau Street into Princeton. The Klan had assembled for a meeting only three miles away, and planned to file right past the university in their cars before dispersing. The Daily Princetonian reported that 800 undergraduates poured onto Nassau Street once the drivers reached the university gates. As the drivers honked, the throng of students stalled the procession and seized the Klansmen’s white hoods. The police then arrived to protect the “Ku Klux Kars.”[3]

The Cambridge debate and senior prom overshadowed reporting on the Klan’s visit to Princeton in the campus newspaper, with the confrontation receiving only one paragraph on the first page the day after it occurred. A day later, the paper satirized the confrontation in an article that imagined the students had mistakenly pried the hoods off the Klansmen’s cars before thinking to pull the cloth hoods from their faces.[4] But despite its meager coverage in the Daily Princetonian, the skirmish with the Klan must have sparked talk on campus. During the Cambridge debate, the first Princetonian to speak—P. S. Havens (class of 1925)—invoked it unprompted:

What better example of personal liberty could we ask than that affair of last night with the hooded Ku Klux Klan on Nassau St.? As instinctively as a dog growls at a thief in the night, so that crowd growled at the Ku Klux Klan.[5]

The opposing side disputed Havens’ interpretation of the incident, and then the debate meandered to other arguments. But Havens’ observation was apt. Although the Ku Klux Klan developed a significant presence in New Jersey during the early 1920s, it gained little traction on Princeton’s campus. 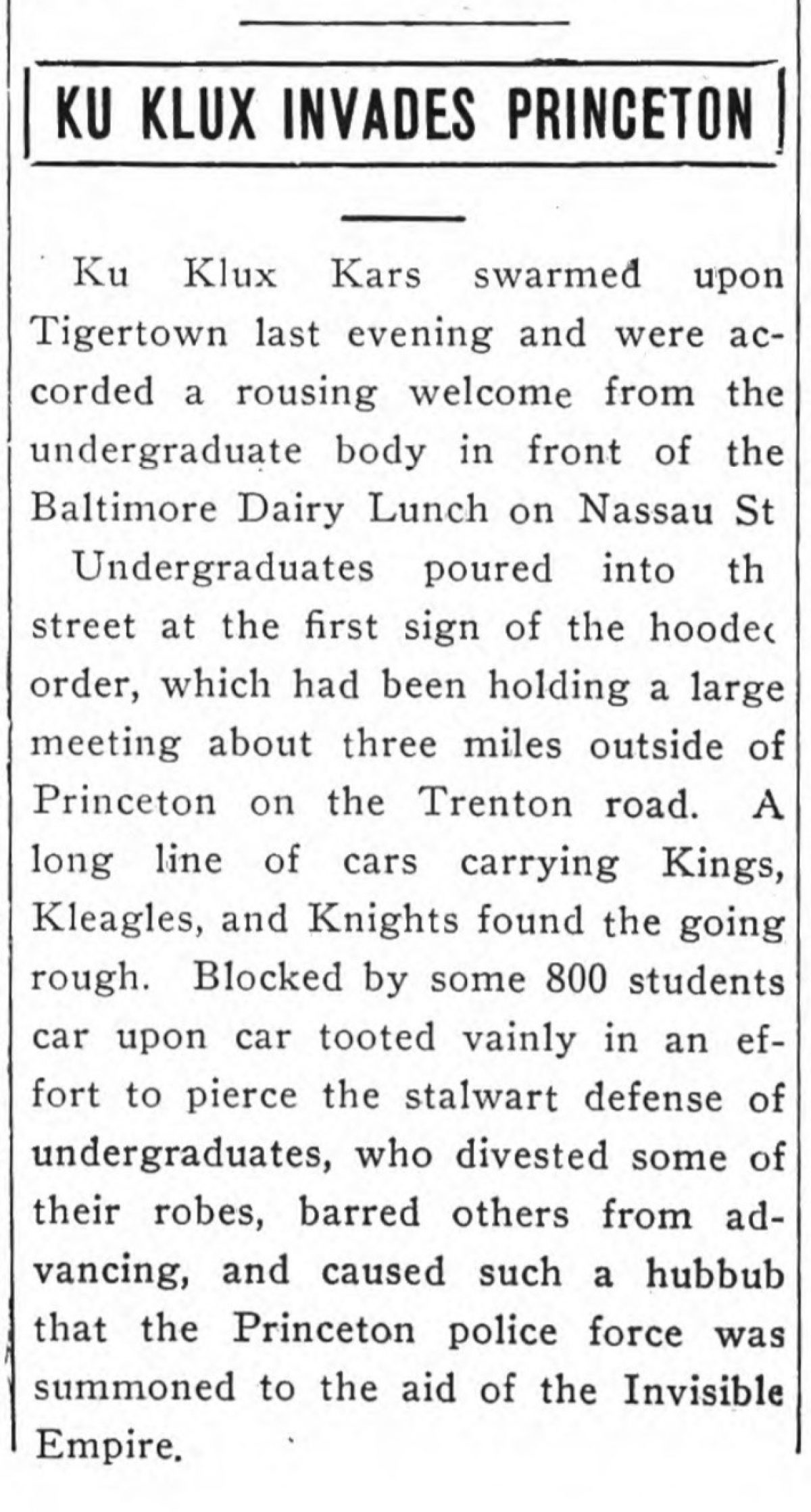 Princeton and the Second Klan

The Ku Klux Klan of the 1920s was much larger, more mainstream, and more northern than its predecessor, which had terrorized free African Americans after the Civil War. The first Ku Klux Klan had sought to impose white supremacy after the abolition of slavery, but in its pursuit of “100% Americanism” the second Klan added Jews, Catholics, immigrants, urban elites, bootleggers, and labor unions to its list of scapegoats. When the second Klan partnered with public relations and recruitment strategists in 1920, its membership skyrocketed—both in urban and rural areas across the country.[6]

The first Klan sought a degree of secrecy; the second participated actively and openly in national and local political debates on subjects like temperance, public education, and immigration. At the local level, Klansmen held private meetings and ceremonies, as well as public demonstrations and parades. When a subset of Klan members wreaked vigilante violence, Klan leadership did little to stop it.[7]

The Klan’s weekly publication, the Imperial Night-Hawk, tabulated 81 Klan events in New Jersey between 1923 and 1924.[8] In July 1924, it reported that thousands of people had attended a single gathering near Long Branch that involved 3,000 initiations, nine cross burnings, a wedding, ten christenings, and an aerial photographer.[9] During this two year period, the publication counted five Klan events in Trenton, and three in Newark.[10] (It did not report on the incident in Princeton.) The second Klan’s membership peaked by 1924, the year of its tumultuous appearance on Nassau Street. Princeton students’ discovery of the Klansmen’s cars, however, was hardly their first encounter with the organization.

Earlier that year, a pair of students had wandered southeast to Lakewood, New Jersey. They ventured into a restaurant, where a waiter told them about a Klan meeting taking place at a nearby church. Curious, the students ventured to the church. They discovered a large crowd outside and drew upon their “football tactics” to reach the door. Denied entry, they negotiated their admission by mentioning their affiliation with the Daily Princetonian. Upon returning to Princeton, the students described the Klan’s dress and ceremony for the campus paper in meticulous detail.[11] 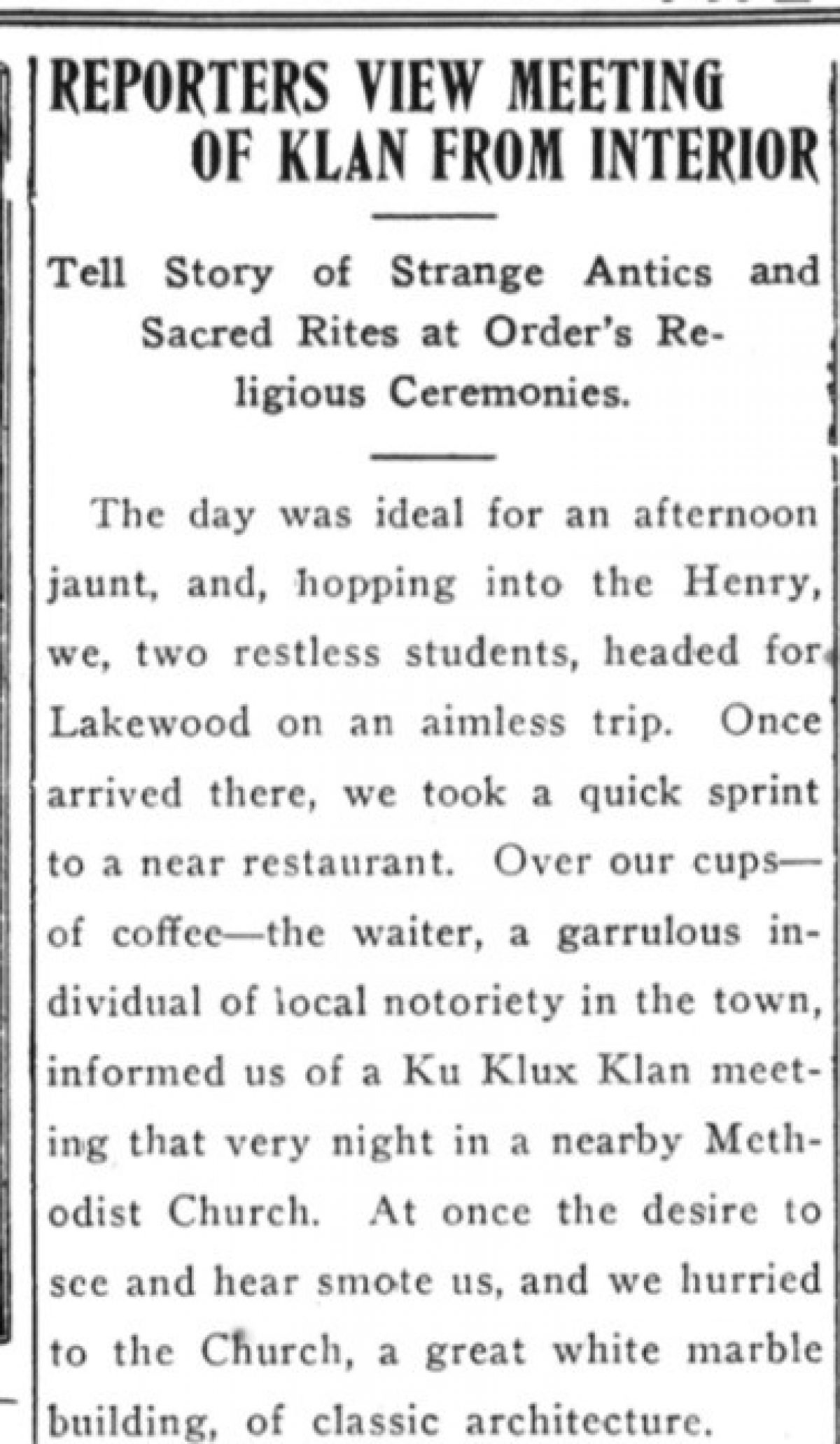 Students also learned of an attempted cross burning in Princeton that year, though few witnesses could corroborate the story. In July, a Princeton resident allegedly encountered two Klansmen setting fire to a cross on Chestnut Street, just a few blocks from campus. The resident leapt before the Klansmen, jabbed his index finger towards them, and ordered them to “stick ’em up.” Convinced the resident’s finger was a weapon, the Klansmen reportedly dropped their materials and obliged, tearing their sleeves in the process.[12]

The KKK encounter that seemed to have generated the most commotion on campus, however, occurred in 1923, a year before the Klan paraded up Nassau Street. That year, students learned that the Klan had become financially and ideologically involved with a small college in Zarephath, just fifteen miles from Princeton.

In 1907, Alma Bridwell White (1862-1946)—founder and evangelist of the Pillar of Fire Church—inherited a plot of land from one of her converts and named it Zarephath. “The only woman bishop in the world” (according to a tongue-in-cheek article in Time magazine), Alma White developed a small town on the land, with a college and prolific printing press.[13] White was fiercely antisemitic and anti-Catholic, a white supremacist devoted to the ideology of the Ku Klux Klan.[14] On multiple occasions, Alma White College received financial assistance from the Klan and hosted its local meetings.[15] In 1923, White estimated that 200 people were enrolled in Zarephath’s educational programs. Her sons, who both held Master’s degrees from Princeton, served as deans of the town’s college and Bible institute.[16]

That year, a Princeton undergraduate journeyed to Zarephath to interview White for the Daily Princetonian. His transcript of the interview, punctuated with commentary of his own, spanned three of the newspaper’s six pages. A peer of his—a disgruntled rival who had recently lost his bid to become the paper’s editor—questioned whether it was wise to offer White such a platform, stating:

A very unpleasant woman from a hitherto unheard-of college nearby made a number of extravagant statements which should not have been accorded even the dignity of notice.[17]

Indeed, White’s statements included declarations of enthusiasm for the Klan, justifications for her thinking, and a warning for Princeton:

For Princeton to try to remain indifferent to the Ku Klux Klan, if indeed she is trying to, is for Princeton to revolve, detached, in her own little eddy of oblivion while the rising tide of the greatest moral and political movement of the generation sweeps by.[18]

Next to the Zarephath story, another article outlined the Harvard Crimson’s new suspicion that the Ku Klux Klan had generated a following at Harvard. For Alma White, the purported developments at Harvard proved the Klan was “on the verge of sweeping through the colleges of the country as it has swept through the masses.”[19] Secluded Princeton, she said, could not hide much longer.

The discovery of a Klan college in Zarephath, so close to Princeton, dominated conversation on campus that week.[20] White’s words prompted University President John Grier Hibben to denounce the Klan. The Daily Princetonian had done the same, in a column printed beside the interview. At the University Chapel, Professor J. Duncan Spaeth delivered a speech that criticized the Klan for sowing disunity and religious tension.[21]

Students also noted that the startling revelations about Alma White College had spilled into the newspapers of other cities and universities.[22] By the following week, however, the New York Times had developed a new take on the story. It concluded that any flickers of student interest in the Ku Klux Klan would prove to be faddish and in jest. Students at Princeton appeared to concur.[23]

As the Times predicted, Princeton students and alumni did dress up as Klansmen in an attempt at humor. Between 1941 and 1958, the University reprimanded undergraduate pranksters in Klan costumes at least three times.[24] In 1924, the entire class of 1920 dressed in Klan robes for the university’s traditional Reunions P-rade, which used to call for group costumes from each class. According to one scholar’s analysis, poking fun at the KKK at the 1924 Reunions celebration was intended to ridicule the Klan. Yet this ill-advised joke was likely only humorous at Princeton University because the school’s predominantly white, Protestant students and alumni were not targets of the Klan.[25] 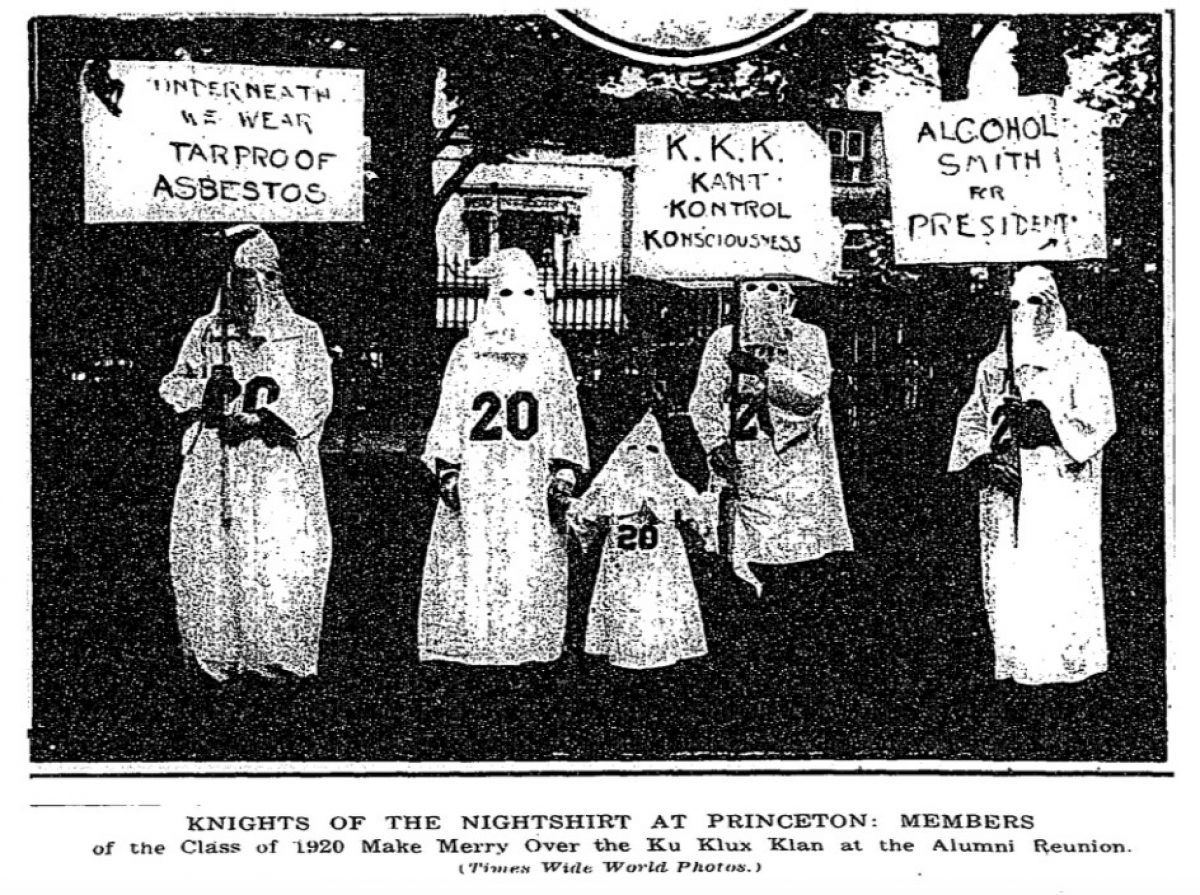 Members of the Class of 1920 dressed in Ku Klux Klan robes at the University's 1924 Reunions celebration.

“Let the Kampus Be Klosed to the Klan”

The university community, in general, did not support the Ku Klux Klan. Though reasons for opposing it varied, the denunciations of the Klan that the Alma White interview generated pointed to a key reason in particular: students resented its vigilante tactics. As the Daily Princetonian editors explained:

The appeal of the Klan to ‘make America safe for Americans’ and for the just administration of the laws, coming from such a source, is an amusing mockery. In the same breath the Klan cheers for the Constitution and good government, and attacks by lawless means Americans of whose religion or birth-place or actions it disapproves… There is no room in this county for any organization which assumes unlawfully the power of government.[26]

If not by its expressed policies, at least by practices in several States, it assumes that its members have a right to take the law of the land into their own hands and to execute it at their own pleasure.[27]

The Ku Klux Klan operated beyond the law. Its vigilantes represented mob rule, of which the Princeton community disapproved—at least by the 20th century, after several incidents of mob violence targeting African Americans in Princeton before the Civil War.[28] “Let the Kampus Be Klosed to the Klan,” the Daily Princetonian asserted when the groundswell initiated by its Zarephath story had calmed.[29]

Daily Princetonian editorial from 1923 condemning the lawlessness of the Ku Klux Klan.

Yet Princeton alumni of the 1920s may not have disagreed with all of the Klan’s prejudices: notably, Princeton’s National Alumni Association donated $1,000 to the Confederate Monument Association in 1924, just one year after the campus paper and University president denounced the Klan.

Overall, the Daily Princetonian stories suggest that the discovery of the KKK in Zarephath sparked the longest-sustained debate on the Klan at Princeton, and likely introduced much of the student body to the group. Appearing around the same time as the Harvard Crimson story about the alleged Klan presence on that campus, the Daily Princetonian stories underscored a deeper anxiety about the Klan. In 1923, the second Klan was still peaking, and whether it would find a space for itself on university campuses remained unclear.

Gabrielle Girard is a Ph.D. candidate in the Department of History at Princeton. Her dissertation research focuses on human rights in Argentina during the 1980s, and how Argentine innovations in human rights during this period circulated globally. She holds a B.A. in history and Spanish from Cornell University.

Linda Gordon, The Second Coming of the KKK: The Ku Klux Klan of the 1920s and the American Political Tradition (New York: Liveright Publishing Corporation, 2017), 2, 13-15.

Gordon, The Second Coming of the KKK, 4.