Princeton Theological Seminary’s 19th century faculty and students encountered enslaved people as a familiar part of life. Though early leaders of the seminary owned slaves and largely failed to condemn the institution of slavery, some notable alumni—including the first African American man to graduate from a theological seminary in the United States—became prominent antislavery activists.

When Princeton Theological Seminary was founded by the General Assembly of the Presbyterian Church in 1812, slavery in New Jersey remained very much alive.  Though the state had passed a law eight years earlier declaring that any child born to a slave mother after July 4, 1804 would eventually be freed, those children still had to serve the mother’s master for a term—women until the age of 21, and men until 25.  Those already in bondage prior to 1804 would remain slaves until they died.  As late as the Civil War, New Jersey continued to have a slave population, albeit a steadily dwindling one. In short, gradual emancipation also meant prolonged bondage.

In this context, both faculty and students at the seminary during its early years encountered slavery as a familiar part of life.  The slow movement toward freedom in other northern states often (though not invariably) paralleled that of New Jersey, but the Garden State was clearly in the rear.  New Jersey was the last northern state to pass a gradual emancipation law, and as one historian has observed, the last thirteen African Americans “held in bondage in New Jersey in 1860 were liberated by death or the thirteenth amendment.”[1] 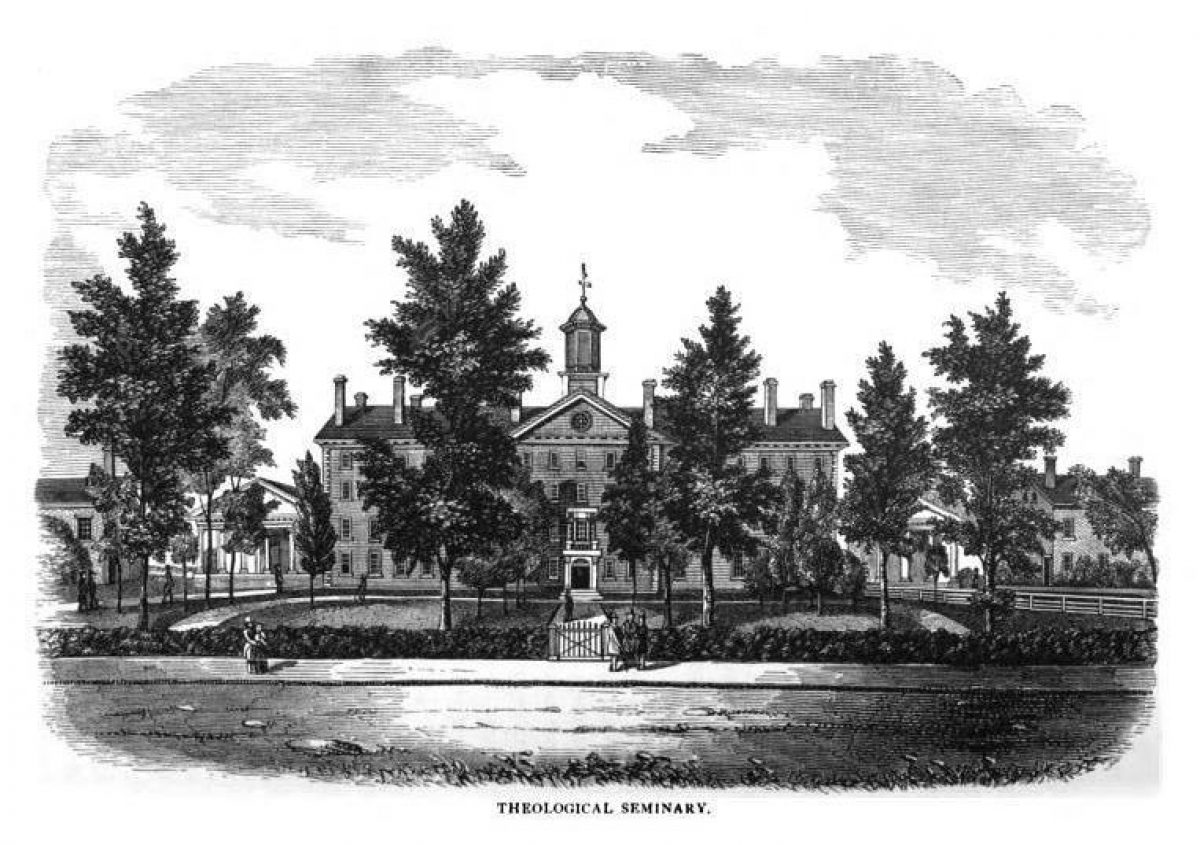 Drawing of Princeton Seminary in the 19th century.

Of the first three professors who taught at the seminary, all used and benefitted from slave labor at some point in their lives. Archibald Alexander, the seminary’s first professor, came to Princeton from the Briery church in Prince Edward County, Virginia, where Alexander ministered during the 1790s.  The Briery church secured at least a portion of its funds from slave labor, on one occasion raising money specifically to buy slaves. These enslaved people and their descendants were then hired out to members of the local community, the profits from their labor paying for the minister’s salary and other church-related expenses—a practice that continued well into the 19th century. Alexander himself owned at least one slave during his early career. When he married his wife Janetta, she brought an enslaved woman to the household: Daphne, who had attended Janetta since her childhood.  Daphne accompanied the Alexanders when they moved to Philadelphia, but was later sent back to Virginia. There is no extant evidence that Alexander owned or hired slaves while he served as a professor at the seminary from 1812 to his death in 1851.[2]

Samuel Miller, who joined Alexander as a professor at the seminary in 1813, did own slaves while in Princeton. Miller’s son recorded that “during the earlier part of his residence in New Jersey,” his father “at different times, held several slaves under the law providing in that state for the gradual abolition of human bondage.”  Most of these enslaved people were born after 1804, meaning that they would eventually be freed, and Miller’s son wrote that his father “held them only for a term of years.”  On one occasion, however, Miller was deceived by the vendor who sold him a slave.  Though Miller was told that the enslaved man he purchased had been born after 1804, he did not in fact qualify for emancipation under the law. Miller was “obliged, by law, to hold him and provide for him for life”—an obligation the professor considered a burden.[3]

Charles Hodge (CNJ ‘1815), the third professor to join the faculty, likewise employed slave labor. In 1828, as his family was growing, he purchased a woman named Henrietta and a few years later acquired an enslaved woman named Lena—perhaps as his inheritance from his mother’s estate. During the 1830s, Hodge had two other African American servants—John and Cato—though his most careful biographer says that it is impossible to determine whether John and Cato were slaves or free black wage earners.[4]

It is clear, then, that early faculty members benefitted from slavery.  But did the seminary as an institution have ties to human bondage?  To date, research suggests that slave labor was not involved in the construction or maintenance of the school’s buildings. Nor did the institution as such own slaves. However, the extent to which slave labor generated funds donated to the seminary is more difficult to determine.  In the early 19th century, money for the seminary was raised largely through annual appeals by the General Assembly to congregations under its jurisdiction. Female “cent societies” also contributed to the support of needy students. Since the Presbyterian denomination was a national church with roots in areas where slavery was common, some of the contributions almost surely came from people who made their livelihood at least in part through slavery.

After the Panic of 1837 severely diminished the seminary’s investments, the school’s leaders turned to the Reverend Cortlandt Van Rensselaer in 1843 to spearhead a campaign to create a permanent endowment.  Van Rensselaer, a member of the school’s Board of Directors, raised $100,000 from around the country, north and south.  His own personal contribution ($2,000) was itself a substantial sum for the era. Van Rensselaer’s wealth came from a family fortune going back to the Dutch patroons who settled along the Hudson River in the 1630s, and the acquisition of that fortune included the ownership of slaves—though there is no evidence that he himself did. Van Rensselaer’s example illustrates an important fact: because human bondage played a crucial role in the formation of wealth in early America, its legacy extended far beyond direct ownership or trade in slaves.[5] 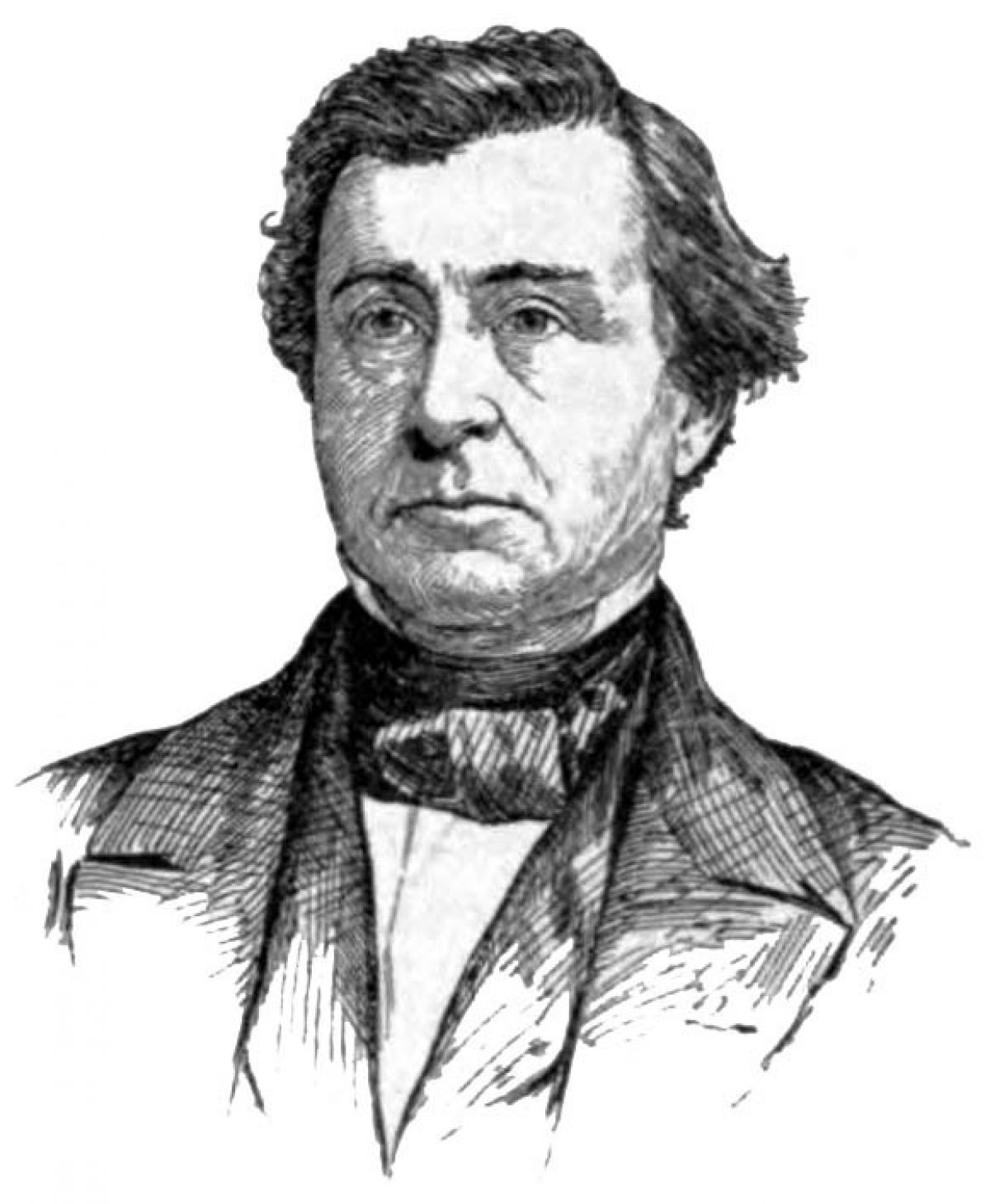 Drawing of Cortlandt Van Rensselaer (1808-1860), a Presbyterian clergyman and member of the Princeton Theological Seminary's Board of Directors.

Despite their personal entanglements with slavery, leaders of the seminary professed to long for a day (its arrival unspecified and uncertain) when all slaves would be free. They insisted, however, that slavery per se was not condemned in the Bible and that abolitionists who called slaveholders sinners were fanatics.

Princeton Theological Seminary called for the religious education of slaves and free blacks as a means of racial uplift. Sarah Miller, Professor Samuel Miller’s wife, helped establish and secure an endowment for the Mount Lucas Orphan and Guardian Institute near Princeton.  When that organization later closed, she arranged for the endowment to be transferred to the Ashmun Institute (later renamed Lincoln University) whose purpose was the higher education of African Americans.[6]

The faculty at Princeton Seminary, along with others at the nearby College of New Jersey, also played a key role in the formation of the American Colonization Society in 1816—making Princeton an epicenter of the movement.  In his longest published work, Archibald Alexander laid out the Princeton brief for colonization with painful clarity:

Two races of men, nearly equal in numbers, but differing as much as the whites and blacks, cannot form one harmonious society in any other way than by amalgamation; but the whites and blacks, in this country, by no human efforts, could be amalgamated into one homogeneous mass in a thousand years; and during this long period, the state of society would be perpetually disturbed by many contending factions. Either the whites must remove and give up the country to the coloured people, or the coloured people must be removed; otherwise the latter must remain in subjection to the former.

Unable to envision an egalitarian multiracial society in the United States, Alexander concluded that “we can confer a real benefit on the African race in no other way than by separating them from the whites, and removing them to the country of their fathers.”[7] 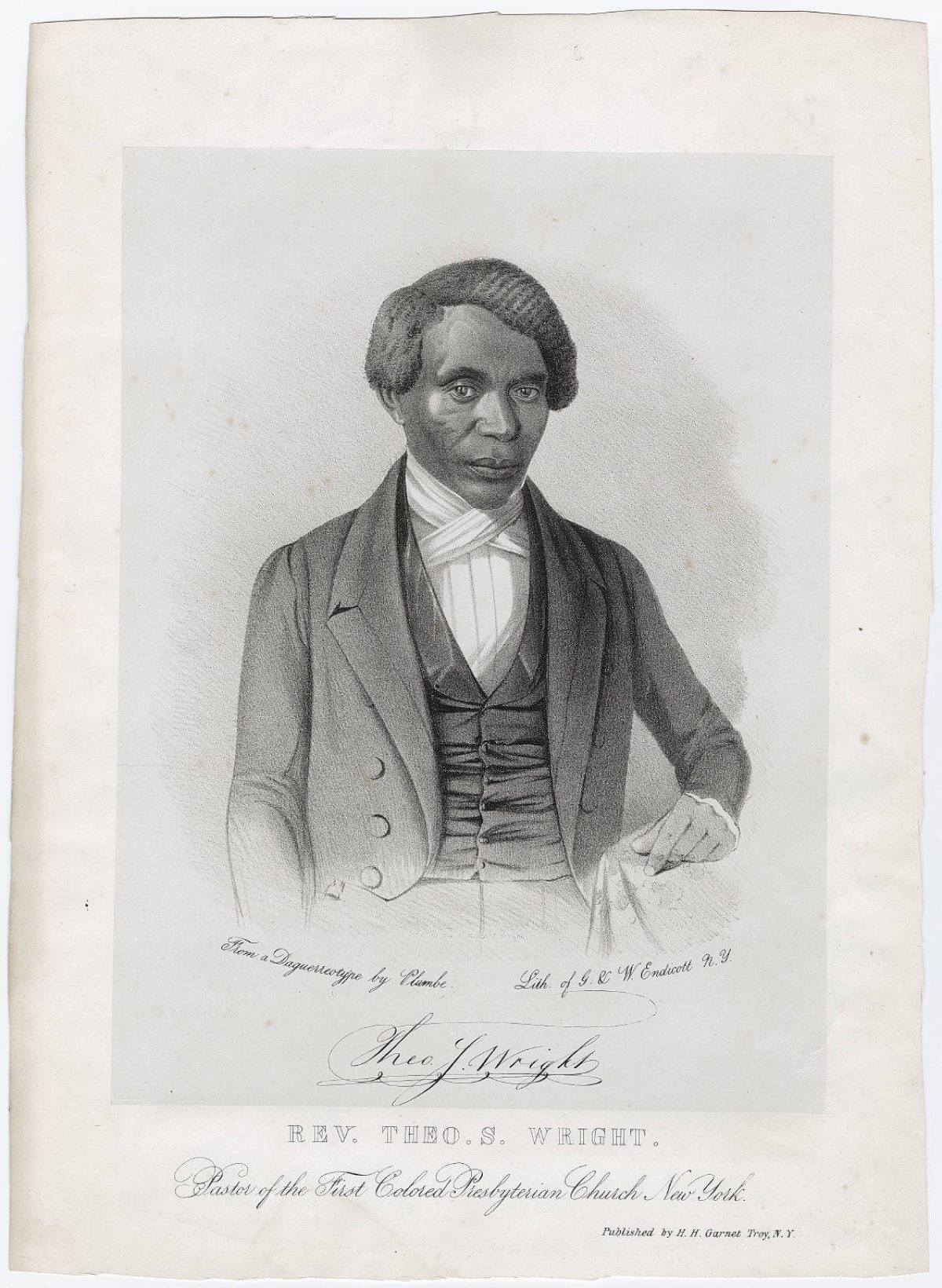 Theodore S. Wright (PTS class of 1828), the first black graduate of a theological seminary in the United States.

To the extent that their later activities and ideologies can be traced, students appear to have generally followed the opinions of their professors.  At least a dozen alumni, for example, served as administrators in national or regional colonization societies.[8]

Other students, however, took more radical positions.  Charles Colcock Jones—a wealthy slaveholder, minister to slaves, and College of New Jersey graduate (class of 1830)—became an ardent defender of the institution.[9]  Albert Barnes (PTS 1823), to the contrary, espoused strong antislavery views in his later life.[10] Elijah Parish Lovejoy (PTS 1834) established an abolitionist newspaper in Alton, Illinois, and died as a martyr defending his press against a mob in 1837.[11]  But most remarkable of all was Theodore Sedgwick Wright (PTS 1828), the first African American student enrolled at Princeton Seminary and most likely in any theological seminary in North America.  Even as a student, Wright advanced anti-colonization views, and as a Presbyterian pastor actively espoused the cause of abolition.[12]

James Moorhead is professor of history emeritus at Princeton Theological Seminary where he taught the history of American Christianity for thirty-three years.  Prior to coming to Princeton in 1984, he taught for nine years at North Carolina State University.  Among his publications are American Apocalypse: Yankee Protestants and the Civil War, 1860-1869 (1978), World Without End: Mainstream American Protestant Visions of the Last Things, 1880-1925 (1999), and Princeton Seminary in American Religion and Culture (2012).  He continues to serve as senior editor of the Journal of Presbyterian History.

View all stories by James Moorhead »

James J. Gigantino II, The Ragged Road to Abolition: Slavery and Freedom in New Jersey, 1775-1865 (Philadelphia:  University of Pennsylvania Press, 2015).  The quotation is from Arthur Zilversmit, The First Emancipation:  The Abolition of Slavery in the North (Chicago: University of Chicago Press, 1967), 222.  In addition to Zilversmit, other works examining the complexities of abolition in the North include Douglas R. Egerton, Death or Liberty: African Americans and Revolutionary America (New York: Oxford University Press, 2009).

A Brief Account of the Rise, Progress and Present State of the Theological Seminary of the Presbyterian Church in the United States at Princeton (Philadelphia: A. Finley, 1822), 57; [Courtlandt Van Rennselaer], Princeton Theological Seminary (Pamphlet indicating no publisher or date but almost certainly 1844); Memorial of Courtlandt Van Rensselaer (Philadelphia: C. Sherman and Sons, 1860). On the role slavery played in building modern capitalism, see Sven Beckert, Empire of Cotton: A Global History (New York: Knopf, 2014) and Edward E. Baptist, The Half Has Never Been Told: Slavery and the Making of American Capitalism (New York: Basic Books, 2014).  How this development affected higher education is told provocatively in Craig Steven Wilder, Ebony and Ivory: Race, Slavery, and the Troubled History of American Universities (New York:  Bloomsbury Press, 2013).

David Anthony Schmidt, “Princeton Theological Seminary’s Student Demographics, 1812-1865: A Report Prepared as Part of an Audit of the Seminary’s Connection with American Slavery” (2017).