White Supremacy at the Commencement of 1836

The commencement of 1836 began like any other. On Tuesday afternoon, September 27, a throng of undergraduate students, alumni, and faculty filed into the chapel of the Princeton Theological Seminary. There were sixty-six graduates in the class of 1836, the largest number in the ninety-year history of the College of New Jersey, and the audience was standing room only. John Morin Scott, a Philadelphia lawyer and a member of the class of 1805, gave the annual address. Scott, who was deeply embroiled in debates about Pennsylvania’s forthcoming constitutional convention, focused his lecture on American politics. “To the atmosphere of republics political storms seem to be congenial,” he announced. “Among them intellect is in perpetual fermentation, teeming with Utopian schemes for the general good, or with less praiseworthy efforts for personal aggrandizement.” At the same time, Scott warned of the “danger of disunion,” of fratricidal militarism and civil war. It was the job of Princeton graduates, he argued, as future leaders, congressmen, senators, and presidents, to hold the fragile fabric of the national union together.[1] 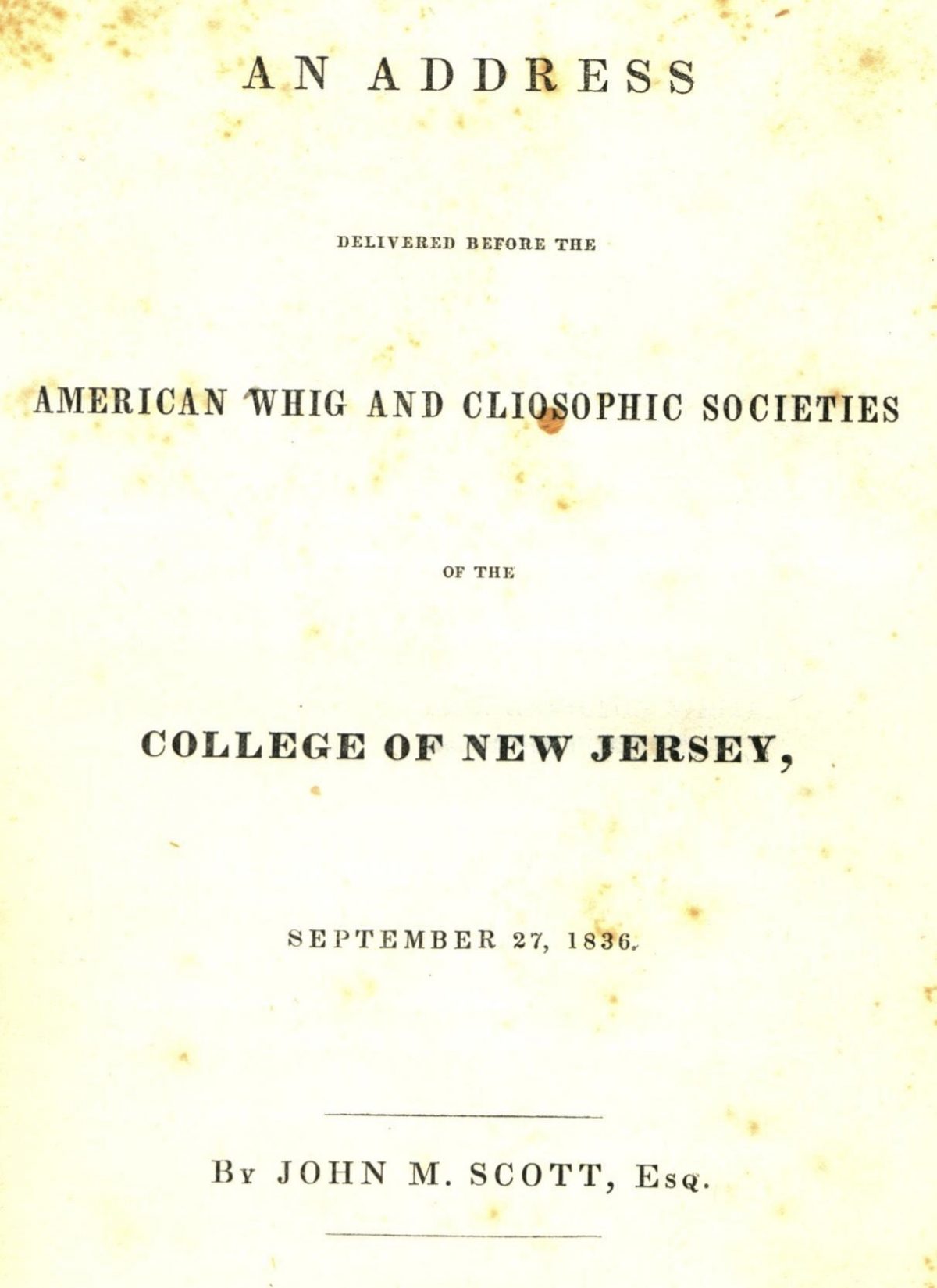 Address delivered by John M. Scott at the annual commencement in 1836.

The Reverend Theodore Sedgwick Wright, a leading black abolitionist, stood at the rear of the chapel, listening intently to Scott’s lecture. An 1828 graduate of the Princeton Theological Seminary, Wright looked forward to reconnecting with old classmates and teachers, and was eager to partake of the “intellectual repast” offered by the commencement speakers. At some point, extra benches arrived, and Wright sat down. What happened next took him by surprise. “The band had played; the President had announced the appointments for the evening, and the audience had arisen to withdraw,” he explained, “when I heard with surprise the ungentlemanly outcry, ‘Out with the nigger’ — ‘Out with the nigger’.” With no time to react, Wright was “seized by the collar by a young man, who kicked me two or three times in the most ruthless manner — at the same time saying, ‘What do you do here? What do you do here? Don't let me see you here again’.” Restrained by a member of the Seminary, the student continued to lash out. “With an air of conscious self-importance, he exclaimed, as if he had effected some noble exploit, ‘My name, sir, is Ancrum; my name is Ancrum’.”[2] 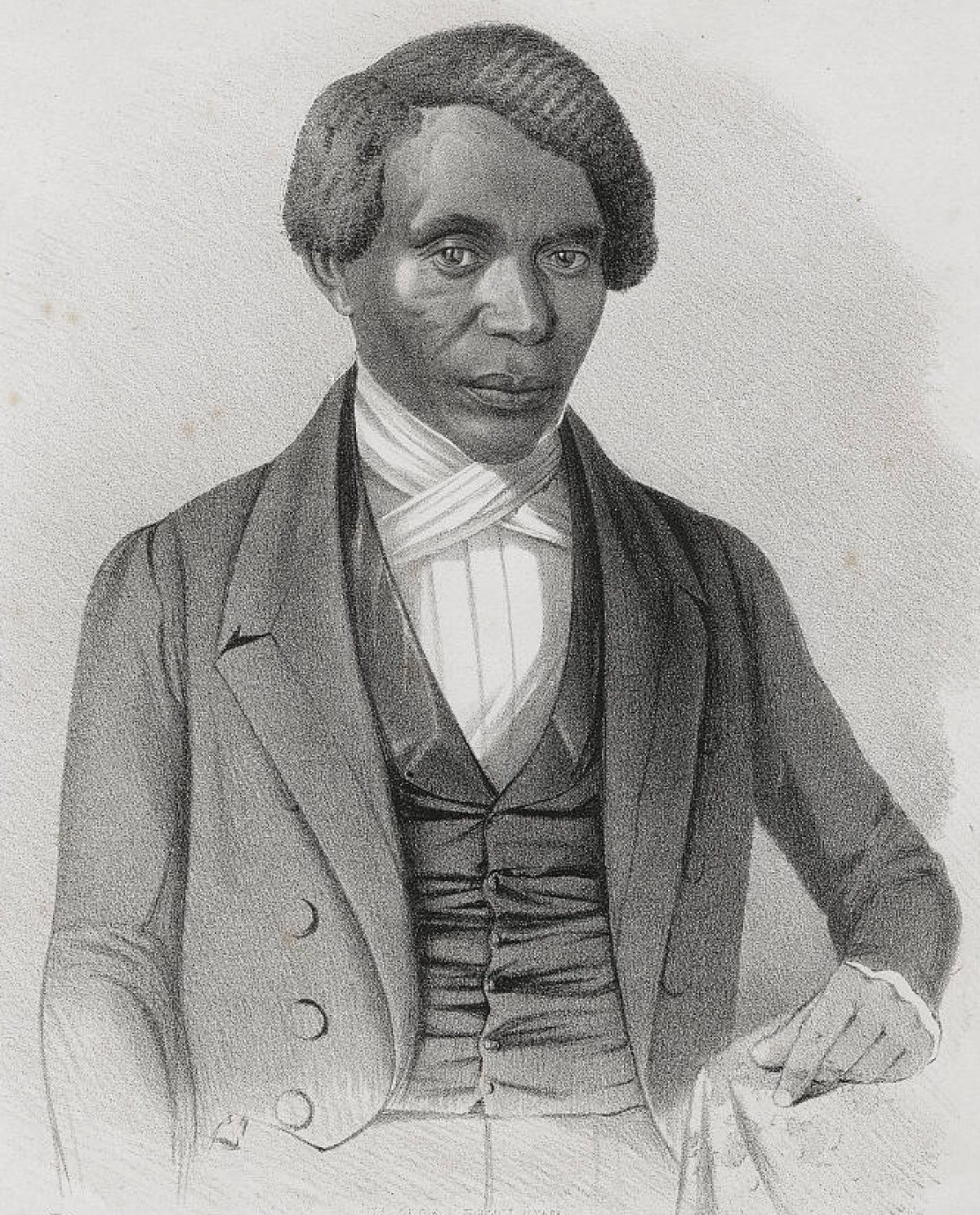 The assailant was probably nineteen-year-old Thomas James Ancrum, a sophomore member of the class of 1838. His older brother, William Alexander Ancrum, was a senior in the graduating class of 1836. Both brothers belonged to a wealthy slaveholding dynasty in Camden, South Carolina. While on campus, they lived with Vice President John Maclean Jr. One year earlier, in September 1835, the younger Ancrum organized and led a lynch mob against a white abolitionist in Princeton. In March 1836, he and another student were suspended “for going to the tavern without permission.” At the end of June, he left the school to run his family’s plantation. Yet he returned in September, presumably to attend his brother’s graduation.

The Ancrums were not the only southerners present at the event.  One-third of the class of 1836 had roots in the slaveholding South, and the school's connection to the region ran deep. John Witherspoon II, grandson of Princeton’s most famous president, a prominent slaveholder, and a neighbor to the Ancrum brothers in Camden, received an honorary doctorate at commencement.[3]

As if to illustrate Scott’s point about maintaining national unity amid a political storm, none of Princeton’s northern faculty or students came to Wright’s aid. President James Carnahan, himself a former slaveholder, published a letter defending the college. His argument was disingenuous and dismissive. Carnahan denied that Ancrum was a student, denied that any violence had occurred, and further denied any personal or collective responsibility for the incident. He refused even to acknowledge Wright, a fellow Presbyterian minister, and referred to him only as “a respectable colored man.” Instead of apologizing or supporting him, Carnahan implied that Wright had provoked the attack. The black minister had the temerity to sit down, he alleged, “while many others unable to find seats, stood during the whole of the discourse.”[4]

Although he considered fighting back against Ancrum, Wright remained calm and stuck to his non-resistant principles. He wrote defiantly:

Let me be persecuted and frowned upon, because of my identity with a class despised and oppressed, or for my feeble efforts to roll away the mountain obstacles which retard their moral and intellectual elevation.

Wright’s response suggests that he was attacked not just because of the color his skin, but because he was an abolitionist. His mere presence at commencement affirmed his belief in racial equality. At its most basic level, Ancrum’s outburst was a counter-message to the rest of the Princeton community. His words echoed through the chapel and ricocheted among students, faculty, and alumni: “What do you do here? What do you do here?” President Carnahan’s desperate attempt to downplay the incident and to blame it on Wright only amplified the message: “Don't let me see you here again.” The meaning was clear. Princeton was committed to white supremacy. Racial equality and abolitionism would not be tolerated.[5] 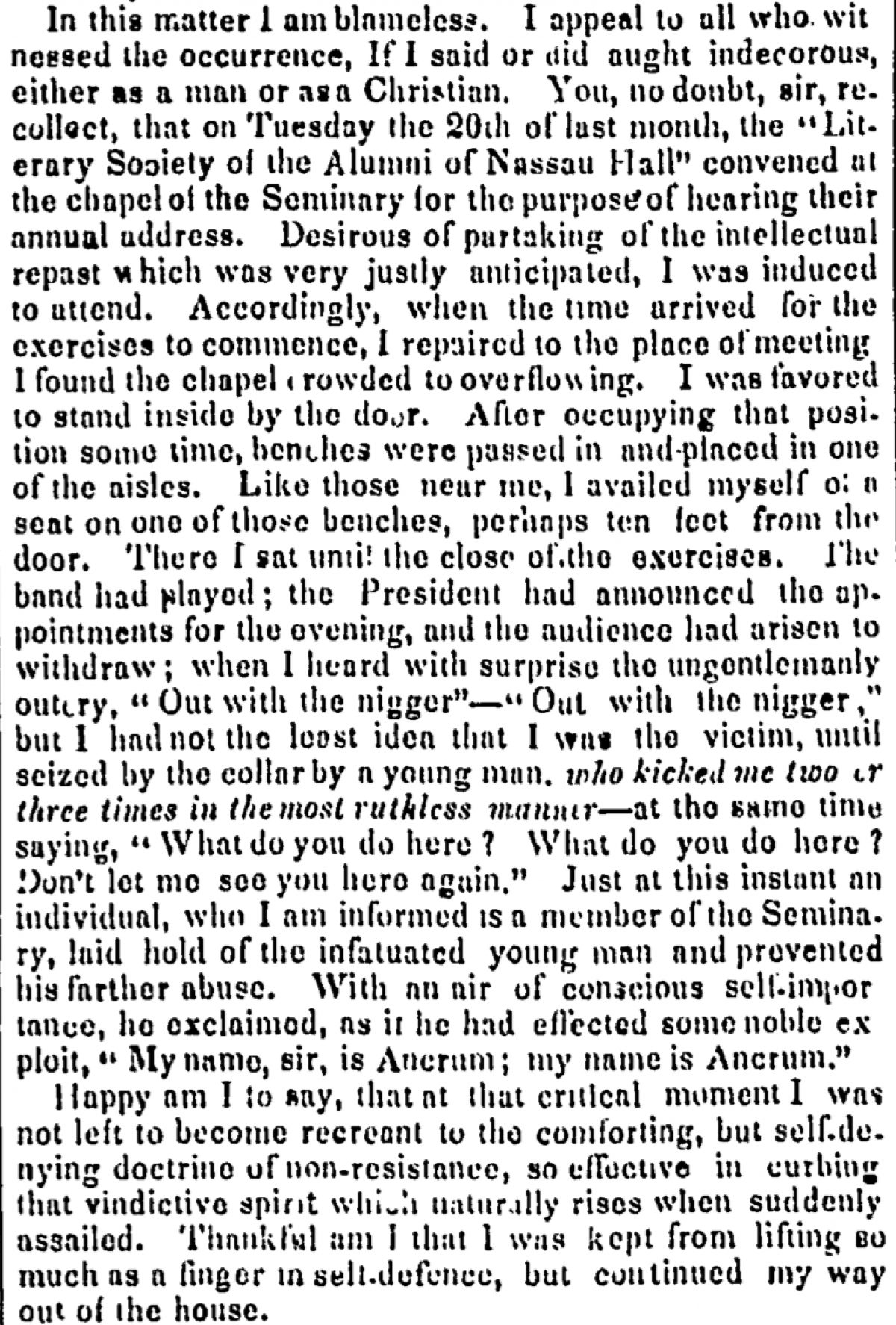 Letters from Lewis Tappan, James Carnahan, and Theodore Wright regarding the attack on Wright during the Princeton commencement. Published in the Emancipator, October 27, 1836.

The Slaveholder and the Abolitionist

Thomas Ancrum was a popular and much esteemed member of the Princeton community. He faced no disciplinary charges for his leading role in the mob attack on an abolitionist in the town’s African-American neighborhood in September 1835, and the faculty allowed him to continue his studies unabated until his suspension for visiting a tavern the following spring. When he verbally and physically assaulted Theodore Wright in September 1836, he again faced no repercussions from either college administrators or town officials. The school’s tacit endorsement of the first attack paved the way for the second. Although technically no longer a student at the time he attended commencement, Ancrum experienced no trouble gaining entrance to the ceremony and clearly saw himself as acting in the best interests of the institution. The indifferent, if not outright supportive, response to his actions showed that he still had plenty of allies on campus. His classmates later described him as “a genial, warm-hearted, whole-souled, impulsive friend and companion, beloved by everybody.”[6]

Returning to South Carolina, Ancrum became a full-time planter. By 1840, he and his brother enslaved a combined total of 168 people on their family estate in Camden. A decade later, the younger Ancrum personally owned at least 107 men, women, and children. The cumulative value of these captives, and their forced labor, allowed Ancrum to amass a considerable fortune and to enjoy a genteel life of sport and leisure, surrounded by a large group of family and friends. His wealth, in turn, influenced his politics. He participated in the siege of Fort Sumter, the first battle of the American Civil War, in April 1861 and served as a recruiting officer for the Confederate Army. His Princeton obituary described him in glowing terms as “a good master and kind in all his relations in life.” The opinions of his slaves and the multiple victims of his violent outbursts were not recorded.[7]

Theodore Wright’s experience at Princeton placed him on a different trajectory. While a student at the seminary in the 1820s, he served as an agent for Freedom’s Journal, the nation’s first black-owned and operated newspaper. The seminary faculty, joined by most of the students, launched a boycott of the paper after its editors took a firm stand against African colonization. Undeterred, Wright accepted a pastorate in New York City and became a leader of the nascent abolitionist movement. In December 1833, he achieved notoriety as a founding member of the American Anti-Slavery Society and served for years on its executive committee. He chaired the New York Vigilance Committee, a militant organization that resisted kidnappers and supported fugitive slaves. He also supported the campaign for black male suffrage and encouraged the work of the Liberty Party, the first national antislavery political party. In 1846, one year before his death, he joined the executive committee of the American Missionary Association. The organization supported abolitionist missions throughout the United States and abroad in Africa, Canada, Hawaii, Jamaica, Thailand, and elsewhere.[8]

The attack on Wright at Princeton became a rallying cry for abolitionists, who still remembered its impact more than three decades later. It also helped to spur the development of independent literary and educational institutions for African Americans. Wright was a founding member and later president of the Phoenix Society, a multifaceted self-help organization, and he established two high schools aimed at black youth in New York. Throughout his career, Wright placed special emphasis on the radical potential of a good education, and he connected the demise of slavery to advanced training in “literature, science, and the mechanic arts” for the black population. In September 1837, one year after his assault at Princeton, Wright gave a speech at the annual meeting of the New York State Anti-Slavery Society in Utica. Addressing an audience of black and white abolitionists, he pointed out that the fight against racism and the fight against slavery were inseparable. “Prejudice must be killed,” he argued, “or slavery will never be abolished.”[9]

Joseph Yannielli received his PhD from Yale and was the Perkins Postdoctoral Fellow in the Princeton Humanities Council. He is an expert on the history of slavery and abolition, with a special focus on America, West Africa, and the wider world during the nineteenth century. His other areas of interest include political and social movements, missionaries and religion, capitalism and globalization, and the United States in the world. At present, he is completing a book about the Mendi Mission and the role of Africa in the American abolition of slavery. He is the founding manager and lead developer of the Princeton and Slavery website and several other digital history projects.

View all stories by Joseph Yannielli »

James Carnahan quoted in “Shameful Outrage at Princeton, N.J.,” Emancipator, 27 October 1836. President Carnahan’s statement that the assailant was not a student seems to implicate Thomas Ancrum, who did not return after his sophomore year. Although the possibility remains that his brother William and others might have been involved.