Robert Field Stockton, a naval officer and supporter of the American Colonization Society, embodied the College of New Jersey’s struggle—and eventual failure—to reconcile the cruelties of slavery with a desire to encourage harmony between the North and South.

Robert F. Stockton (1795-1866) was the scion of the eminent slaveholding Stockton family of Princeton, New Jersey.  The Stocktons had been closely tied to the college since its founding—Robert’s great-grandfather John Stockton had in fact donated land in Princeton to entice the college to relocate from Newark in 1756.[1] Stockton matriculated at Princeton (already a member of the third generation of his family to do so) but withdrew from the college in 1810 in order to join the U.S. Navy, which was at the time struggling to protect American seamen from British impressment. 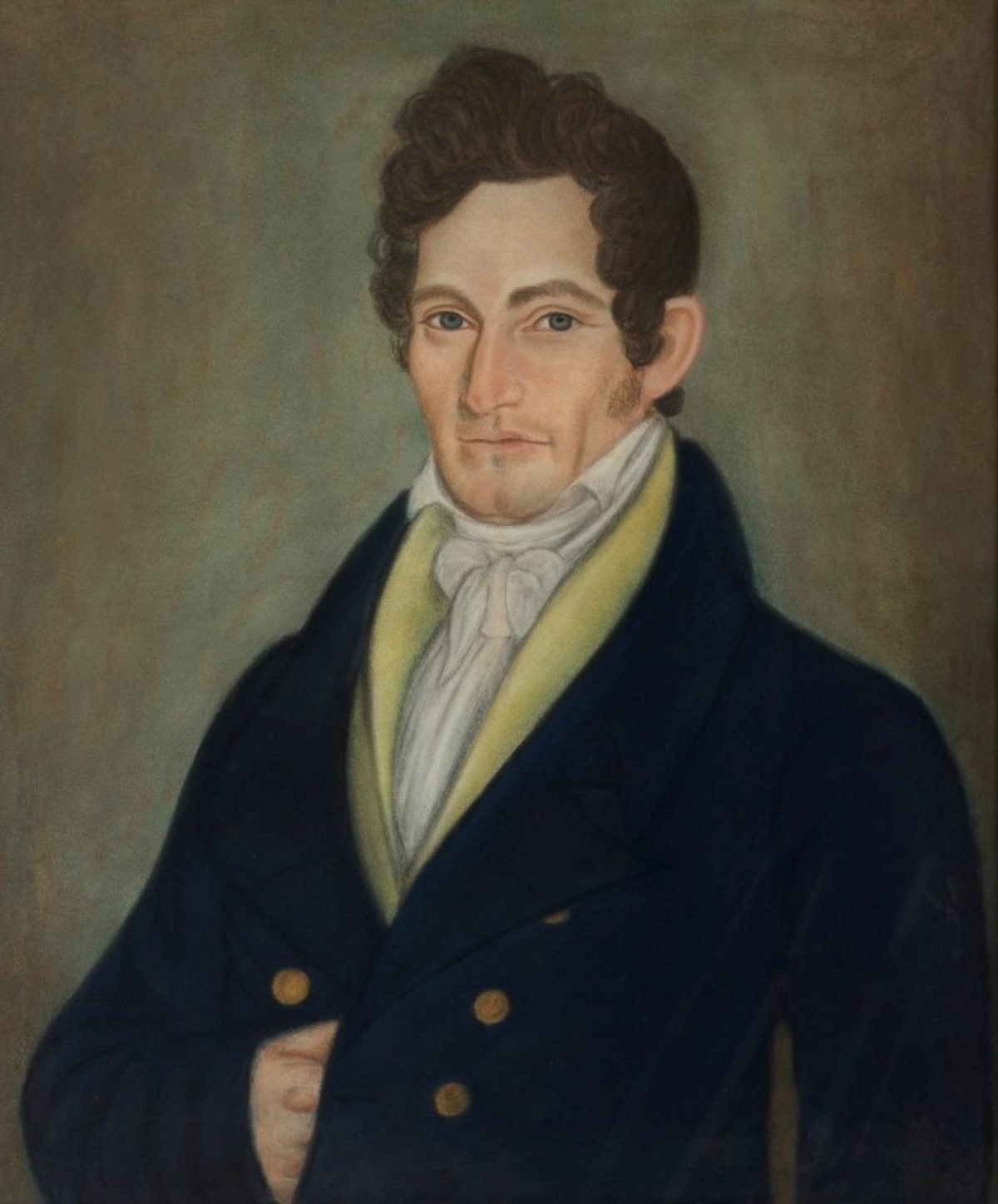 Portrait of Robert F. Stockton, an officer in the United States Navy who acquired the territory that would become Liberia on behalf of the American Colonization Society in 1821.

Early in his naval career, Stockton made a name for himself by focusing on the suppression of the African slave trade, which the federal government had prohibited in 1808. Following the War of 1812, he used his Princeton connections in the American Colonization Society (ACS) to obtain command of the USS Alligator—a new cruiser that the Navy planned to send to Africa to suppress the slave trade. Once in Africa, Stockton realized the futility of patrolling for American slavers when they could hide behind the flags of other nations. Instead, he decided to seize traffickers without regard for their purported nationality. The Alligator subsequently captured four foreign slave ships, constituting the U.S. Navy’s most aggressive action against the slave trade during the early republic.[2] As Stockton proudly reported in 1821:

I have great satisfaction in the reflection that I have procrastinated the slavery of some 800 Africans, and have broken off this horrible traffic to the northward of Cape Palmas for at least this season.[3]

With Stockton at the helm, the Alligator conducted another tour of the west African coast between October 1821 and January 1822.  On this voyage, Stockton purchased a 130-mile long and 40-mile wide swathe of coastline on behalf of the ACS. This land would form the basis of Liberia—the ACS’s colony for free black Americans and liberated African slaves.[4] Years later, Samuel Bayard (class of 1820), claimed that Stockton threatened the local headman, King Peter, at gunpoint to secure the final transaction. He wrote:

Drawing another pistol and levelling at the head of King Peter, and directing him to sit silent until he heard what was to be said, [Stockton] proceeded to say, in the most solemn manner…he had determined that King Peter himself should be the first victim, and that unless he agreed to execute the treaty on the following day his fate was fixed.[5]

This account might have been greatly exaggerated or even apocryphal. But local African groups were clearly unsatisfied with Stockton’s negotiations; they attacked the colony in 1822. It was only thanks to British mediation that the colony survived at all.[6] In the meantime, Stockton sailed victoriously back to the United States. Newspapers reported that the Alligator “has on board a collection of Curiosities, including a stuffed Whale, and a Serpent of the species called Boa Constrictor, alive, intended for the Princeton College.”[7]

Newspapers also praised Stockton for his contributions to both the colonization movement and the suppression of the African slave trade. Stockton, in turn, became a public advocate for the two initiatives. In 1824, he gave a speech in which he referred to the African slave trade as an “unnatural practice of speculating in human blood.” Stockton then went on to emphasize that the eradication of that traffic was inseparably tied to the success of the colonization movement. He outlined how “the establishment of a colony in the heart of the slave-trade would lead [Africans] to the cultivation of their land...as a more quiet and easy mode of obtaining those articles of European luxury which have become almost necessary to their existence.”[8] Given Stockton’s experience, advocacy, and increasingly public profile, he was elected the President of New Jersey’s Princeton-based chapter of the ACS in 1825.

"Non-Intervention is the True Principle"

Despite Stockton’s participation in ostensibly “antislavery” activities, at no point during his long and distinguished public career did he favor the immediate abolition of slavery.[9] On the contrary, Stockton continually sought to reassure slaveholders that his efforts to suppress the African slave trade and support the colonization movement were no threat to the institution of slavery itself. “I embark,” he exclaimed in 1825, “not in the wild and destructive scheme which calls on the South for immediate and universal emancipation.”[10] In that sense, Stockton—like many of his Princeton affiliates—was attempting to find a sustainable middle ground between those who were opposed to slavery and those who approved of it.

Stockton was especially outspoken during the late antebellum period. Having both fought against the slave trade and advocated for colonization, he had the antislavery credentials to urge his fellow northerners to halt their antislavery agitation. “Is domestic slavery, as it exists at the South, a sin?,” Stockton asked. “It seems to me,” he answered, “that question must be answered in the negative.”[11] Under the circumstances, Stockton then contended that, “upon the question of domestic slavery in the States and in the territories, non-intervention is the true principle.”[12]

Ironically, Stockton’s public service actually contributed to the dissolution of the Union. As a Commodore in the Navy during the Mexican-American War (1846-48), he played an instrumental role in the American seizure of California from Mexico. And it was this acquisition of Mexican territory that accelerated the sectional conflict over slavery that would eventually lead to the Civil War.

Stockton represented New Jersey in the U.S. Senate from 1851 to 1853, when he resigned to become the president of the Delaware and Raritan Canal Company. He also served, along with at least 12 other Princeton alumni, as a delegate to the Washington Peace Conference of 1861—which in a last-ditch effort to prevent war offered to make slavery permanent. His determination to hold the country together at any cost to black Americans both reflected and reinforced Princeton’s commitment to moderate conservatism on the issue of slavery.

Indeed, although Stockton never graduated from Princeton, it would be difficult to overstate the extent to which he was personally identified with the college. His extensive family was, after all, inextricably tied to the college and town.[13] In 1843, Stockton publicly paid tribute to this relationship by naming a new naval steamship the USS Princeton.[14] He also inherited Morven, his family’s illustrious estate in Princeton. While residing at Morven, Stockton—the war hero, politician, and business leader—frequently engaged with the college’s students, faculty, and administrators, who came to regard him as their elder statesman and liaison to the broader community. On one occasion he even prevented a dispute between hundreds of students and townspeople (many carrying firearms) from devolving into violence.[15]

Stockton’s admirers at Princeton probably believed he could do the same for the North and South. And since Stockton wished for “non-intervention” in slavery to be the “true principle,” that would be their principle too.

Craig Hollander is an assistant professor of American history at The College of New Jersey. Before joining the TCNJ faculty, Professor Hollander was the Behrman Postdoctoral Fellow in the Department of History at Princeton University. His dissertation, titled "Against a Sea of Troubles: Slave Trade Suppressionism During the Early Republic," won both the 2014 C. Vann Woodward Prize from the Southern Historical Association and the 2014 SHEAR Dissertation Prize from the Society for Historians of the Early American Republic. Professor Hollander’s manuscript is under contract with the University of Pennsylvania Press for publication in the Early American Studies Series.

View all stories by Craig Hollander »

Three of the Alligator’s prizes escaped, leaving only the crew of the French slave ship Jeune Eugenie to face charges in the U.S. District Court in Massachusetts. The French were outraged. Stockton sought to convince the Monroe administration that slave traders could not hide behind the French flag because France itself had outlawed the slave trade. However, he was only narrowly able to avoid a court-martial (thanks to his father’s intervention).

It would take a team of genealogists to determine how many of members of the Stockton family have attended Princeton. Between 1748 and 1865, there were at least 22 graduates with just the surname Stockton. Stockton’s own son, Robert F. Stockton, Jr., graduated from the college in 1851. He, too, would serve in the U.S. Senate.

This honor literally backfired. The USS Princeton featured the largest naval gun in the world (“the Peacemaker”). In 1844, the crème-de-la-crème of Washington, D.C., society attended an opening ceremony for the gun aboard the Princeton. Stockton fired the untested gun, which exploded, killing six and wounding 20. Among the dead were the Secretary of State, the Secretary of the Navy, and one of President John Tyler’s slaves. Tyler rescued Julia Gardiner, whose father David was also killed in the explosion. The two were married a few months later.

According to Professor Albert Dod, Stockton mediated a near-violent dispute between the students and the laboring men of Princeton. Both sides had armed themselves with pistols and guns, and the faculty sent for Stockton to intervene. Before the “desperate battle” could commence, “he soon succeeded…in persuading [the two sides] to settle and compromise their whole difficulties on terms honorable and acceptable to each party.” Samuel J. Bayard, A Sketch of the Life of Commodore Robert F. Stockton… (New York: Derby & Jackson, 1856), 45.