The KKK and Princeton's 1955 Emmett Till Petition

When three Princeton students organized a petition protesting the acquittal of Emmett Till’s murderers in 1955, classmates dressed in KKK robes threatened their lives. Though the campus newspaper and Princeton administration characterized the incident as a “prank,” the event revealed deep divisions on campus over issues of racial justice.

Contents
The Petition The "Prank" The Aftermath About the Author References
Tags: Student Life Newspapers Political Thought
Share this story:

On August 28, 1955, Emmett Till, a Black 14-year-old from Chicago, was kidnapped, brutally murdered, and thrown into Mississippi’s Tallahatchie River by two white men, Roy Bryant and his half-brother J. W. Milam. Bryant claimed that Till had whistled at a white woman, his wife Carolyn, and in Bryant’s mind this justified violent retaliation. When questioned by the authorities, Bryant and Milam admitted to kidnapping Till but insisted that they had released him alive. Although there was clear evidence of the men’s guilt, an all-white jury in Leflore County, Mississippi, unanimously declared Till’s murderers not guilty on September 23, 1955.[1]

Three days later, a group of 17 Princeton students and faculty members, organized by William D. Zabel (Class of 1958), gathered in Murray-Dodge Hall to organize a petition protesting the court’s acquittal of Bryant and Milam.[2] The petition read:

The undersigned, students and faculty members of Princeton University, want to publicly reject the standards of justice and the attitude toward humanity implicit in the recent Emmett Till incident in Mississippi. We vehemently reject a racial standard of justice and believe that a great number of our fellow Americans will support us.[3] 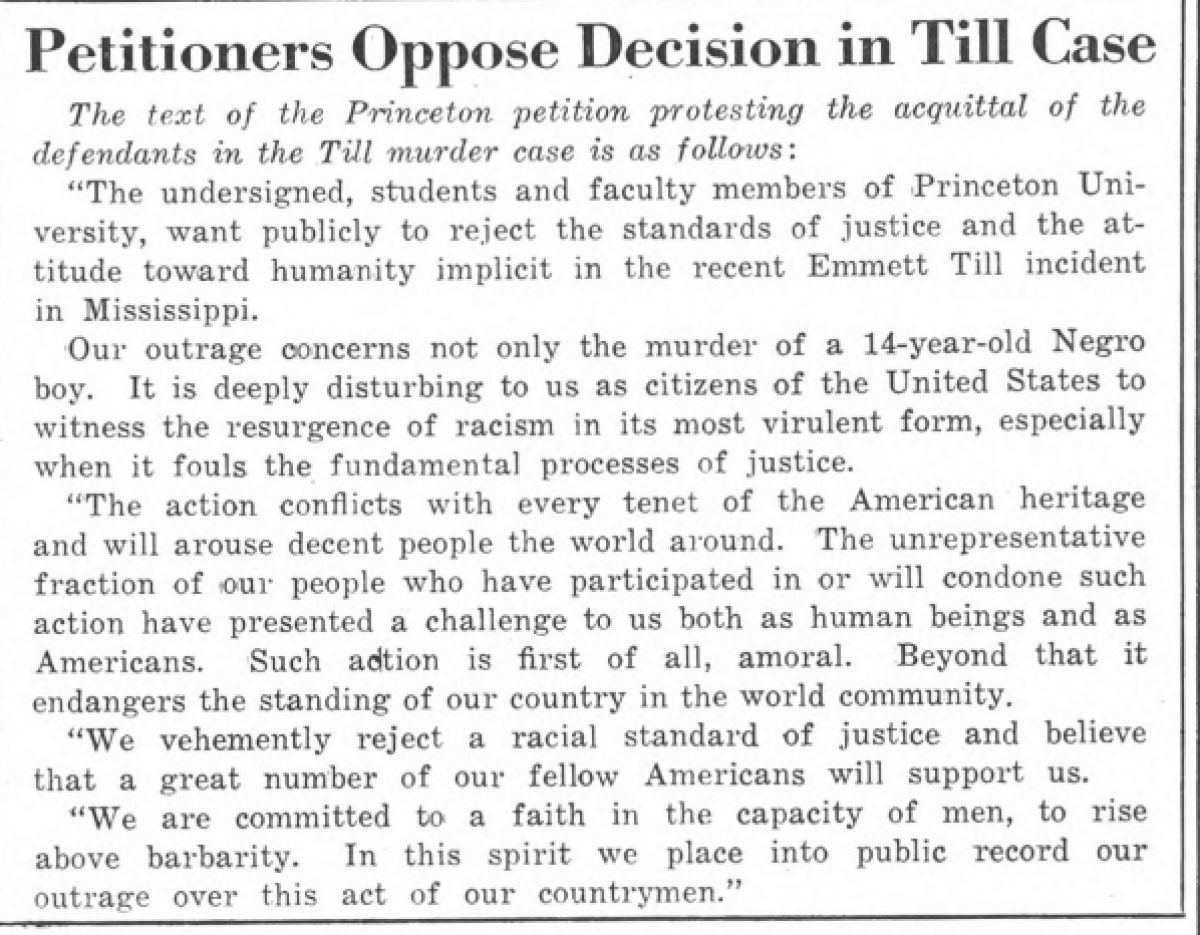 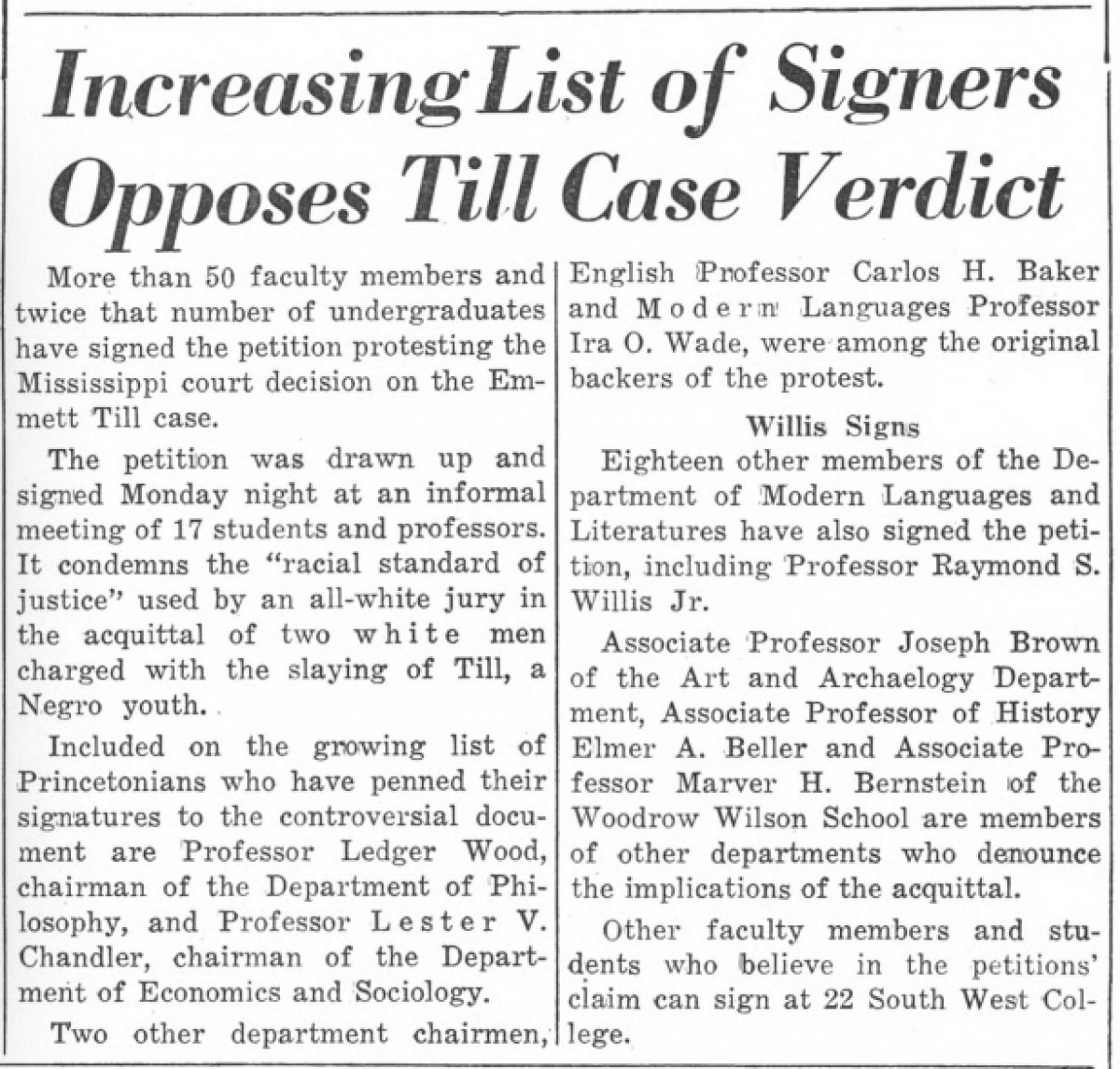 More than 150 students and faculty members signed the 1955 petition.

Princeton had long been known as a politically conservative campus, particularly when it came to issues of race. Of the approximately 600 Princeton students and alumni who fought in the Civil War, more than half of them fought for the Confederacy.

This legacy continued into the 20th century. In the 1920s, the Princeton Alumni Association donated $1,000 to support the Confederate Monument at Stone Mountain. In 1935, a Black undergraduate named Bruce Wright had his acceptance offer revoked when University administrators realized he wasn’t white. The school had only integrated its undergraduate student body in 1942, when four Black students arrived on campus as part of a Navy training program during World War II, and just four Black undergraduates had received their degrees by 1953.

Yet the 1955 petition was a break from this pattern, an indication that Princeton’s campus climate was changing. The reaction to the petition, however, would prove that some students weren’t ready for change.

The night of October 1st, William Zabel waited in his room to collect more signatures, accompanied by two of his classmates, Peter Murphy (‘1958) and Chuck Lapine (‘1958), who looked after the petition when Zabel fell asleep.[6]

“At 12:45 a.m., Lapine and Murphy heard a knock on the door,” the Daily Princetonian reported on October 3, 1955, “and upon opening it, found themselves face to face with four figures clad in sheets and pillow-case hoods. One man was carrying a 12-gauge pump shotgun and another was brandishing a .22-caliber target pistol.”[7]

The article, entitled “Hooded and Armed Menacing of Petitioners Exposed As Soph Prank,” went on to say that Lapine and Murphy’s “first reaction was to laugh,” but their laughter was cut short by the pump of a shotgun. Two intruders held them at gunpoint, while the other two entered the bedroom.[8] Zabel was awakened by the barrel of a shotgun. The hooded men handed him a note which read “Get rid of that petition or we’ll be back.”[9]

This was not the first instance of white supremacist violence, or threatened violence, on Princeton’s campus. In 1835, students attempted to lynch a white abolitionist who was meeting with members of the town’s Black community. In 1836, students attacked Black abolitionist Theodore Wright during Commencement ceremonies. And in 1846, a mob of more than a dozen southern students nearly killed an African American man for his supposed “insolence.” Though the Daily Princetonian called the 1955 incident a “prank,” Zabel and his classmates had every reason to believe the threat was real.

“These people seemed to have well-designed Klan sheets,” Murphy noted in a 2020 interview. “Not a trivial matter, if you’re an amateur at it and haven’t done it before, to cook up that pointy hood.”[10]

They told us that if we didn’t stop this -- excuse my language -- n****r loving behavior, they would come back and kill us.[11]

As the intruders were on their way out of Zabel’s dorm room, Murphy slammed the door in an attempt to snag one of their hoods as evidence. The hood slipped through the door, but he managed to catch hold of one raider’s left shoe, which from its “spitshine” seemed to belong to an ROTC student.[12] According to the Daily Princetonian, “the only other clue was a number ‘2’ seen on the corner of one of the sheets, which marked it as property of the Gordon-Davis laundry.”[13]

The three petition organizers immediately reported the incident to their proctors, and then spent the following day trying to track down their assailants with little success. According to Zabel, however, it wasn’t the shoe that gave the intruders away: it was their laundry. “The students weren’t very clever,” he said. “One of the ways that they were found out was because University laundry took care of the bedding for all the undergraduates--and they found their sheets with eyes cut out.”[14]

The Daily Princetonian reported on the discovery of the “pranksters”: “Finally, made aware that their joke had been reported to high administration officials, including President Dodds, and realizing that the prank had snowballed far beyond their expectations, they collected their costumes and firearms, and reported themselves to the proctor’s office.”[15]

That same day, the campus paper also published an anonymous statement by the “pranksters” themselves, in which the students claimed that they were not motivated by politics or racism. “Our only intention was to participate in a prank,” the statement read. “Neither our political leanings nor personal feelings toward those involved were responsible for the conception of Friday's hoax.”[16]

“We offer our apologies to those whom we have caused anxiety,” it continued, “and especially to Dr. Dodds and the entire university for the reflections our actions may have cast upon Princeton University.”[17]

As for the consequences that the sophomores faced in the aftermath, the Daily Princetonian ran a two-sentence story on October 4, 1955, entitled “‘Klansmen’ Reprimanded,” which occupied a small square in the bottom-right corner of the front page. The report read: “Four sophomores, who staged the ‘Ku Klux Klan’ raid on the Emmett Till incident petitioners early Friday morning, received a stiff lecture and an official reprimand yesterday from Dean of Students William Lippincott (‘1941). The pranksters turned themselves in to the proctors late Friday night, realizing that their practical joke had serious implications.”[18] 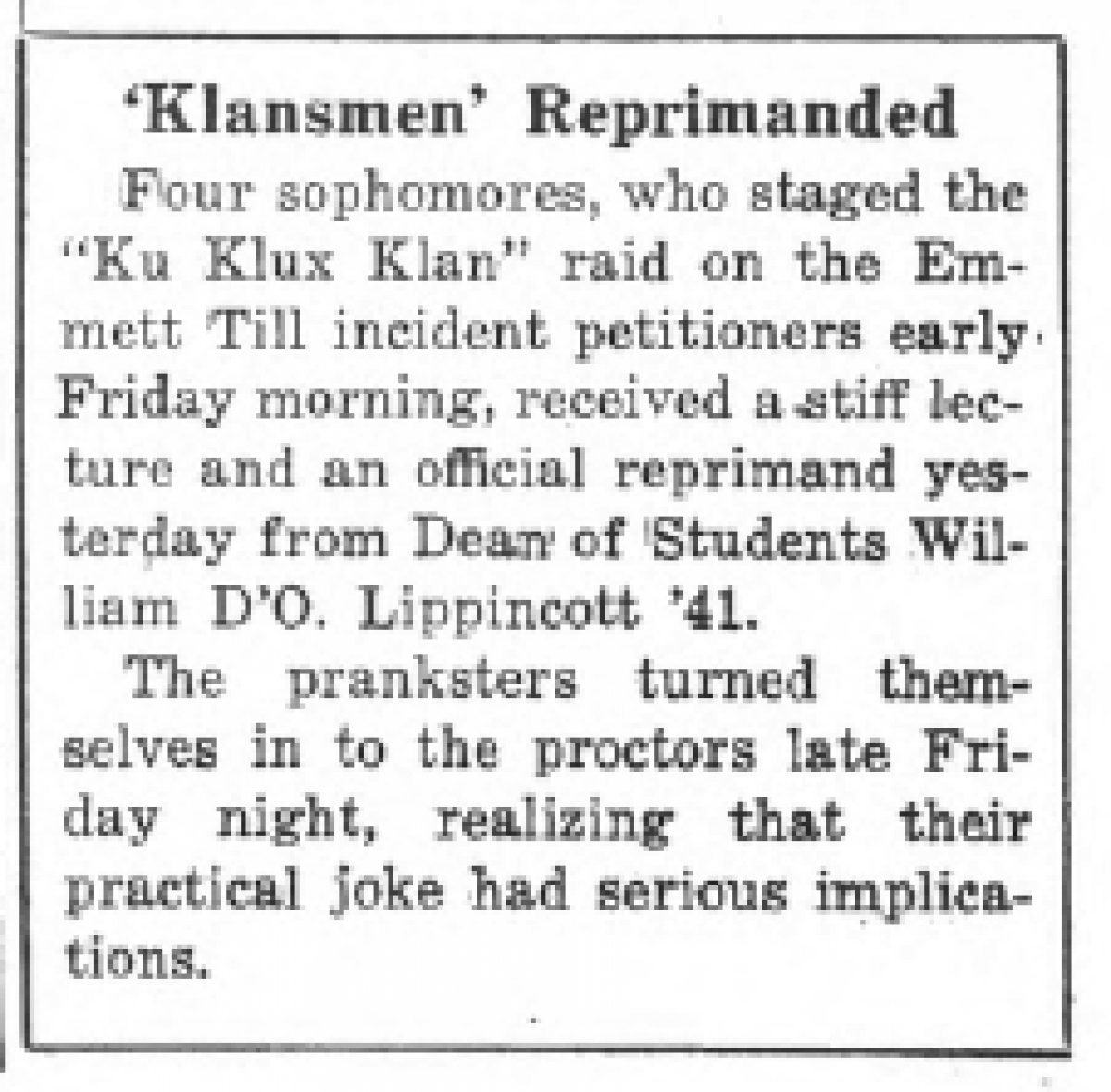 The "pranksters" faced lenient consequences for their threats on the petition organizers.

The administration’s leniency towards the sophomore “pranksters” again echoed Princeton’s 19th-century history: the students responsible for the attempted lynching of an abolitionist in 1835 hadn’t been punished either, although one of them was suspended for visiting a tavern the following year.

Zabel recalled the identity of only one of the culprits, who passed away in 2019. According to Zabel, the culprit apologized to him at their 25th reunion, citing the event as the “most shameful instance of his life.” Ironically, Zabel said, the man ended up becoming a successful liberal journalist.

Today, 65 years after the event, Murphy and Zabel continue to reject the characterization of the event as a “practical joke” or “prank.” “If it was just a prank, then their sense of humor was very bad,” Zabel said.[19] “As soon as they took out the guns,” Murphy said, “it wasn’t a prank.”[20]

Murphy recalled that his mother, infuriated with the University’s leniency towards the students who threatened to kill her son, sent a letter to President Dodds in protest. She received a reply, Murphy said, of which “the only impression, perhaps even in these words, was that boys will be boys.”[21]

“It opened my eyes to the notion of institutional CYA,” he said. “Cover your ass.”[22]

Zabel, too, remembered the incident as an eye-opening event. He has been involved in important civil rights matters over the course of his long legal career. Most notably, he wrote the winning brief in Loving v. Virginia, the 1967 Supreme Court decision which ruled that laws banning interracial marriage were in violation of the Fourteenth Amendment.[23]

The student-faculty petition opposing the acquittal of Till’s murderers and the violent reaction that followed reflected stark divisions on campus regarding politics and racial justice. Although popular support for the petition demonstrated that campus climate may have been slowly changing, the reactionary impulse of the ‘Klansmen’ revealed that white supremacy’s deep roots in Princeton’s history had not yet lost their hold.

View all stories by Ellen Li »

Emmett Till’s murder and its aftermath has been the subject of extensive reading and writing. In a recent book, The Blood of Emmett Till, Timothy Tyson delved particularly into the Bryants’ fabricated accusations, and in an interview with Tyson, Carolyn Bryant admitted that she did not “remember” whether Till had whistled at her or not. Timothy Tyson, The Blood of Emmett Till (New York: Simon and Schuster, 2017). See also Elliot Gorn, Let the People See: The Story of Emmett Till (New York: Oxford University Press, 2018); Devery Anderson, Emmett Till: The Murder that Shocked the World (Jackson, MS: University Press of Mississippi, 2015); Dave Tell, Remembering Emmett Till (Chicago: University of Chicago Press, 2019).

Peter Murphy, in a phone interview with the author, September 2020.

William Zabel, in a phone interview with the author, October 2020. Chuck Lapine could not be interviewed, as he passed away on April 6, 2015.