Abel Upshur’s political career began and ended with Princeton: in 1807, he was booted from the college for leading a student rebellion; in 1844, he was killed in an explosion aboard the U.S.S. Princeton. In the years between, Upshur was one the most influential pro-slavery statesmen in the antebellum United States.

Abel Parker Upshur (1790-1844) was born into a prominent family of planters on Virginia’s Eastern Shore.[1] After a year at Yale, he transferred to the College of New Jersey in 1806. As a Princeton sophomore, Upshur became involved in what historians have called the “great rebellion” of 1807, perhaps the most significant student uprising in early 19th-century America.[2] 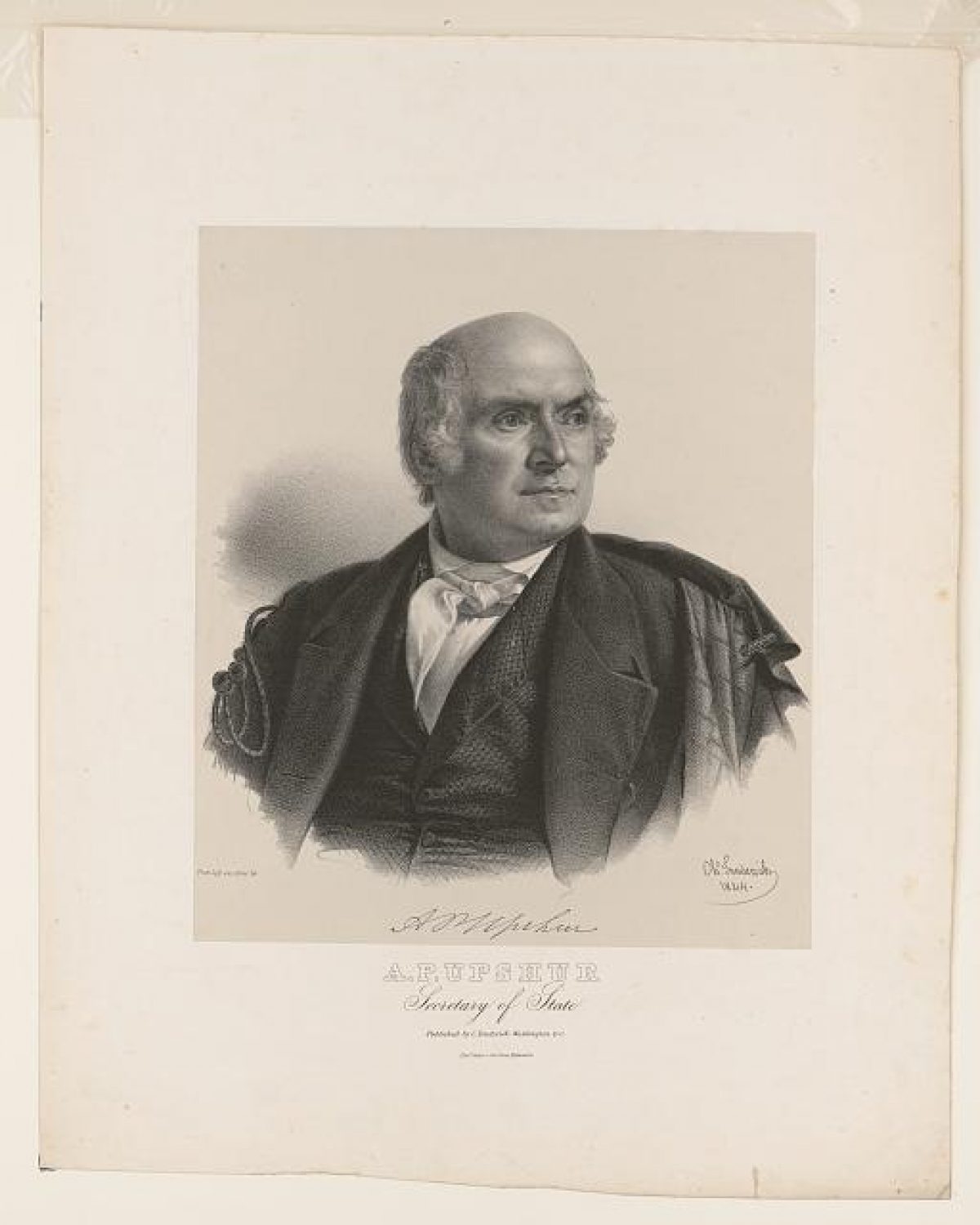 Portrait of Abel Upshur, a prominent proslavery politician during the antebellum period.

Upshur was part of a large cohort of southern students on campus during the winter semester of 1807. On a fractious and overcrowded campus bristling with political, religious, and generational conflict, peers tended to identify Virginians as leaders of student insubordination.[3] After the faculty moved to suspend three students for bad behavior, a group of dissidents responded with a petition, bearing over 160 student signatures, demanding that the suspensions be lifted.

When college president Samuel Stanhope Smith and trustee Richard Stockton Jr. refused to relent, the student rebels forcibly occupied Nassau Hall, which they held for over a week. In negotiations with the administration, the rebellious students appointed Upshur to be their spokesman. In front of the trustees, the sixteen-year-old Virginian delivered a passionate defense of the student protest, which climaxed in the argument that “the connection between student and instructor” was fundamentally different than the relationship “between parent and child.” Upshur rejected the idea that the principles of “domestic government”—such as applied to children, and, perhaps, slaves—could ever apply to Princeton students.[4]

The trustees rejected Upshur’s arguments as a dangerous brand of “Jacobinism.”[5] Yet although the young Virginian was expelled from the college, not all the southern rebels were treated so harshly. Another student involved in the uprising, James Moore Wayne of Georgia, remained at Princeton, graduated in 1808, and was eventually nominated to the Supreme Court by Andrew Jackson. There he remained a strong advocate of both slavery and the union, concurring in Chief Justice Roger Taney’s Dred Scott ruling in 1857, but remaining loyal to the United States and continuing to serve on the Court throughout the Civil War.[6]

After his expulsion, Upshur moved to Richmond to study law, where the one-time Princeton Jacobin quickly emerged as a leading Virginia conservative. Throughout the 1820s, as an attorney, judge, and state legislator, Upshur defended the interests and worldview of eastern Virginia’s slaveholding class.  At the state constitutional convention of 1829, he helped planter conservatives beat back reforms that aimed to expand suffrage and reapportion the legislature to reflect the growth of the non-slaveholding population in western Virginia. “Shall he who possesses no property,” Upshur asked rhetorically, “be permitted to dictate laws for regulating the property of others?”[7]

Throughout the 1830s, Upshur’s extensive writings won him a national reputation as a strident champion of both slavery and states’ rights. His influential 1840 treatise, A Brief Enquiry into the True Nature and Character of Our Federal Government, rejected a “consolidationist” interpretation of the Constitution, insisting on strict limits to the authority of the federal government.[8] Nevertheless, when his friend and fellow Virginian John Tyler was elected president in 1841 following the death of William Henry Harrison, Upshur leapt at the chance to take hold of federal power.

As Tyler’s Secretary of the Navy from 1841 to 1843, Upshur worked to radically expand and modernize American sea power. His major fear was a military collision with Great Britain, which had emancipated its Caribbean slaves in 1833. A British “incursion” on the “southern portion of our country”—perhaps involving black West Indian troops—could “subvert our social systems” and be “disastrous in the extreme.” Along with other proslavery southerners in the Navy and in Congress, Upshur sought to build a much larger and stronger naval force that could combat British power on the open sea, far from America’s vulnerable slave states.[9]

In 1843 Tyler nominated Upshur to serve as Secretary of State. In the State Department, Upshur proved a vigilant and assertive administrator of proslavery statecraft. Keeping a close eye on threats to slavery in Cuba and Brazil, Upshur’s central focus was the fourth largest slave society in the hemisphere, the independent Republic of Texas. It was Britain’s “general plan,” he wrote the U.S. envoy to Texas, to “abolish domestic slavery throughout the entire continent and islands of America.”[10]

In order to defeat British abolitionism and save American slavery, Upshur believed, the United States must annex Texas. Upshur devoted the bulk of his efforts in Washington to the diplomacy of annexation, and by the winter of 1844 he was putting the finishing touches on a formal treaty that would join Texas to the United States. The Secretary of State, however, would not live to see the treaty go before Congress.

In February 1844 the U.S.S. Princeton steamed into the Potomac. The screw-propeller sloop, the first of its kind in the Navy, was a result of Upshur’s own efforts to modernize the American fleet. Captain Robert F. Stockton, scion of the Stockton family of Princeton, and himself a former Princeton student, had helped design the sloop’s heaviest gun, whimsically labeled the Peacemaker.

On the clear and bright morning of February 28, President Tyler, his cabinet heads, and much of fashionable Washington society turned out for a gala aboard the Princeton. The Peacemaker was fired several times, demonstrating, as one reporter put it, “the great power and capacity of that formidable weapon of war.”[11] After the guests enjoyed a “sumptuous repast” in the cabin, the big gun was fired once again. This time it exploded, sending shards of iron across the deck. According to another eyewitness account, Upshur, who had been standing close to the gun, “was badly cut over the eye and in his legs—his clothes were literally torn from his body—he expired in about three minutes.”[12] The explosion also claimed the life of Thomas Walker Gilmer, Upshur’s replacement as Secretary of the Navy, and several others on deck, including President Tyler’s personal servant, an enslaved man named Armistead. 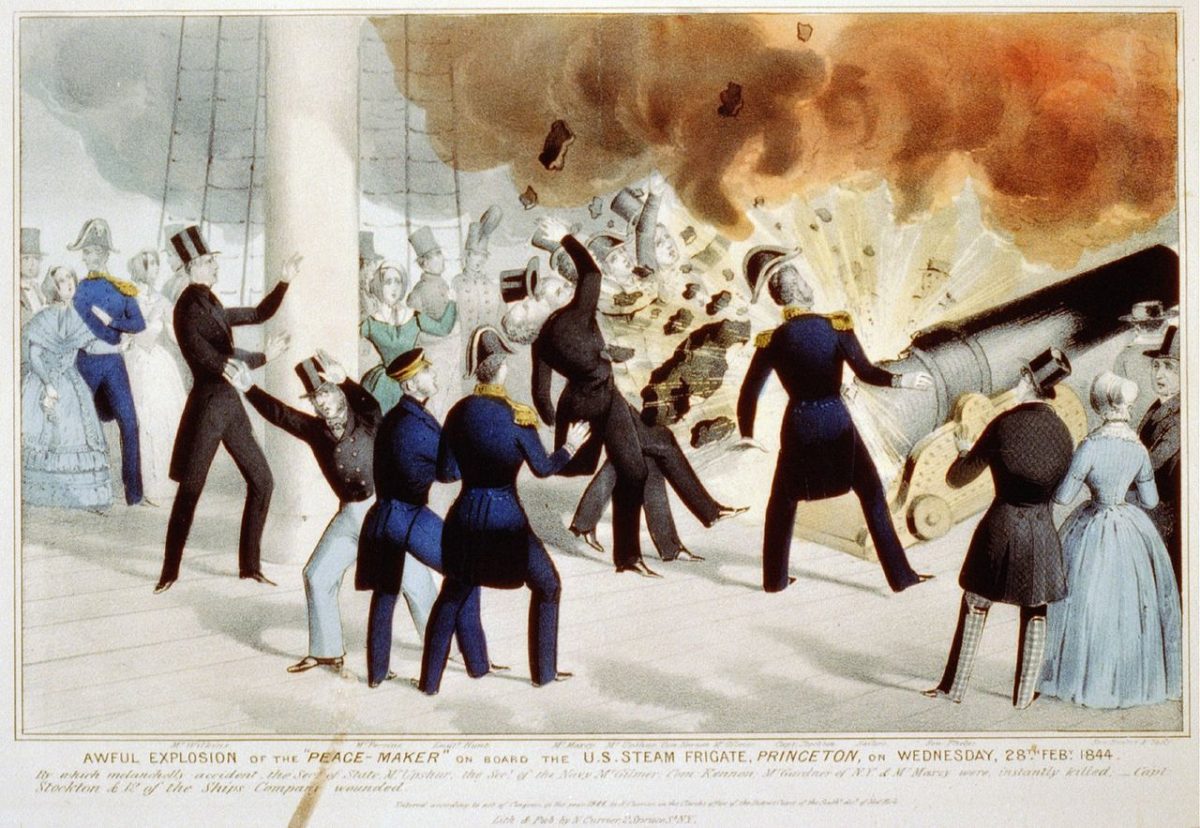 Explosion of the "Peacemaker" on board the U.S.S. Princeton in 1844.

Upshur’s Texas annexation plans, however, outlived the Secretary of State himself. In the election of 1844, the Democrat James K. Polk, running on a pro-annexation platform, defeated the Whig Party candidate Henry Clay. With South Carolina’s John C. Calhoun now at the helm of the State Department, in early 1845 the lame-duck Tyler administration succeeded in annexing Texas—and protecting its fragile slave institutions—through a joint resolution of Congress. Antislavery advocates in the North were outraged, insisting that the United States must not acquire new slave territory. Nevertheless President Polk completed the process, brought Texas into the Union, and affirmed Abel Upshur’s most important legacy.[13]

The original bell of the U.S.S. Princeton, a memento of the Secretary of State who died aboard it, is on display outside the Princeton Battle Monument in Princeton, New Jersey. 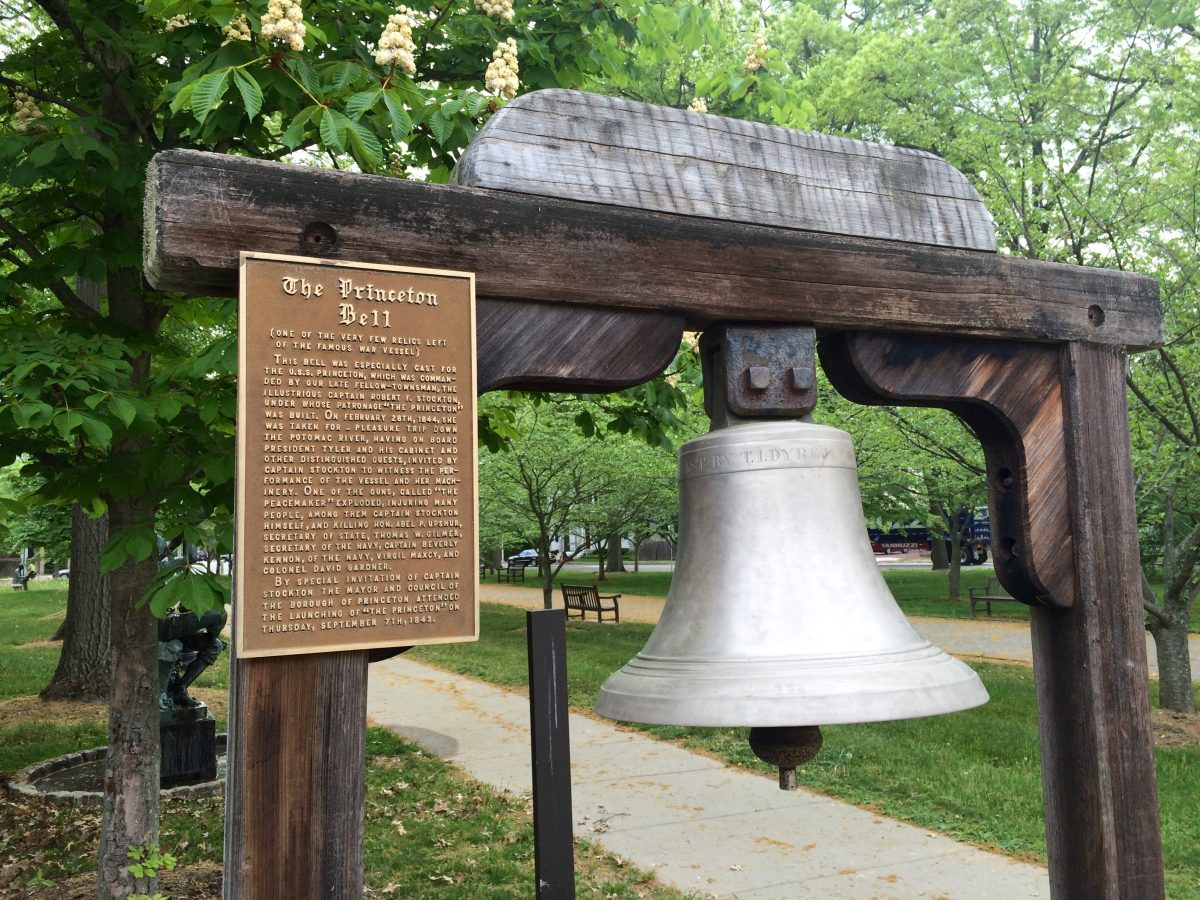 Bell of the U.S.S. Princeton on display in Princeton, New Jersey.

Matthew Karp is an assistant professor of history at Princeton University, where he teaches courses on the U.S. Civil War era and the nineteenth-century world. His first book, This Vast Southern Empire: Slaveholders at the Helm of American Foreign Policy, was published by Harvard University Press in 2016.

View all stories by Matthew Karp »

Upshur, “Domestic Slavery, as It Exists in Our Southern States…,” Southern Literary Messenger, October 1839, 677-87; Abel P. Upshur, A Brief Enquiry in the True Nature and Character of Our Federal Government: Being a Review of Judge Story’s “Commentaries on the Constitution of the United States” (Philadelphia: John Campbell, 1863 [1840]).