Stephen Alexander, Princeton’s first astronomy professor, held moderate antislavery views but denied the equality of black and white Americans. At the same time, he may have employed an African American man named Alfred Scudder as an assistant on campus.

Stephen Alexander (1806-1883) arrived at Princeton University in 1832 with his brother-in-law Joseph Henry, the college’s newly-hired Chair of Natural History.[1] Alexander too joined the faculty: first as a professor of mathematics and then, in 1840, as chair of Princeton’s astronomy department.[2] During his 50-year tenure at Princeton, Alexander would strengthen the college’s astronomy program­ during a time of increasing professionalization of the sciences. 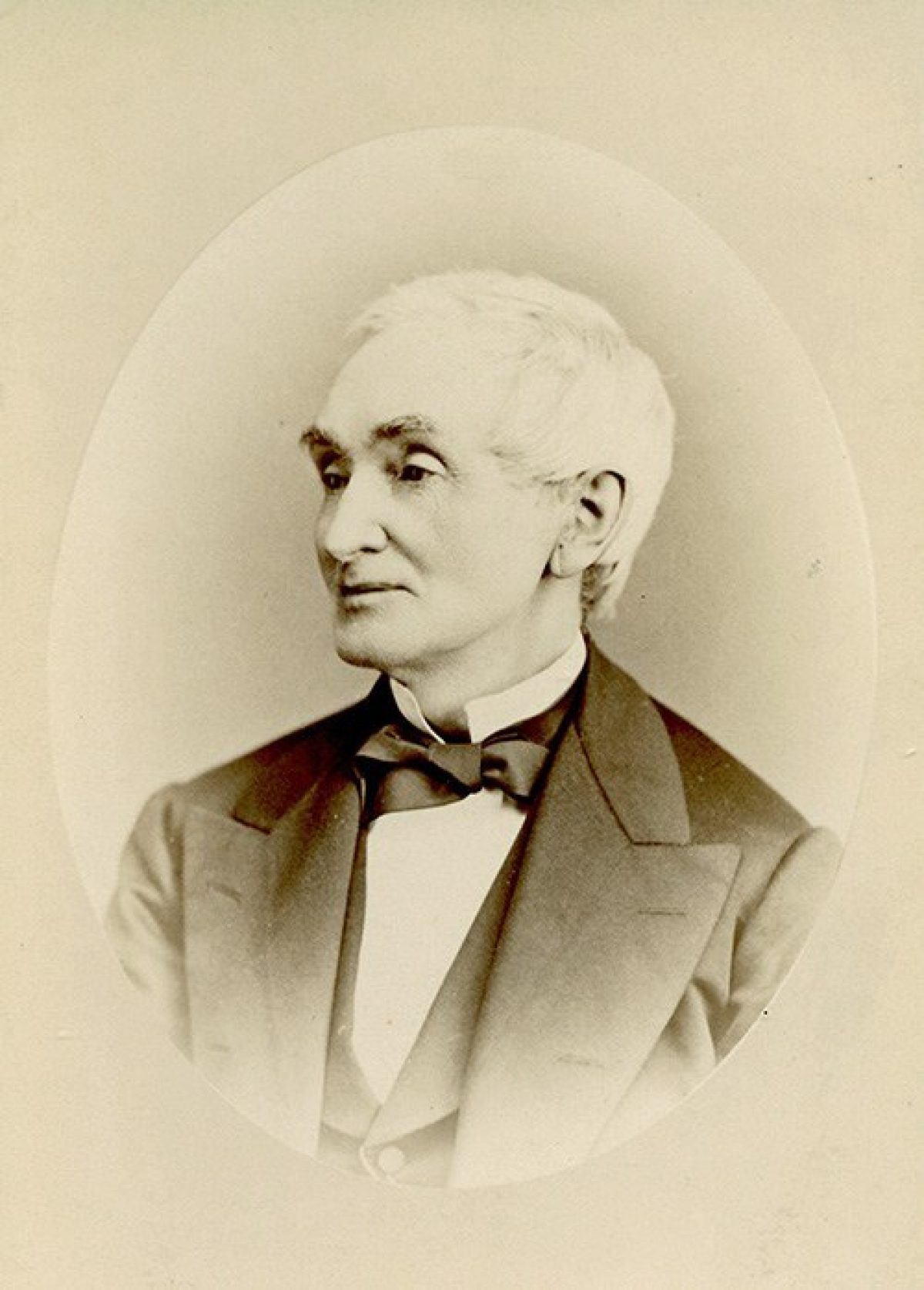 Until the mid-19th century, the physical sciences fell within the field of “natural philosophy,” which was heavily influenced by theology. Natural philosophy aimed to discover the intimate connection between God and the natural world, a perspective Princeton (then the College of New Jersey) emphasized from the very beginning. Because the college was originally founded to train future ministers, many of Princeton’s early presidents and professors were Presbyterian ministers and religious thinkers. Throughout the 18th and 19th centuries, moral philosophy was central to the college’s curriculum.

Professionalization of the sciences, however, meant “disciplinary autonomy”—divorcing the field from the dominance of theology. Alexander contributed to this process by promoting technical innovation on campus: he strongly advocated for the construction of Princeton’s first observatory, Halsted Observatory, erected in 1869.[3] In 1882, shortly before his death, Alexander observed the transit of Venus across the sun—an astronomical phenomenon that would not occur again until 2004.[4] Yet Alexander also lectured that God’s moral order controlled the physical world.[5] Students, who called him “Stevie,” recalled that he was the faculty member most concerned about the “moral habits of the students.”[6]

Alexander’s reflections on morality also extended to the issue of slavery. Throughout his life, the professor would discuss slavery with friends and colleagues and, like many Princeton affiliates, participated in the moderate antislavery American Colonization Society. At the same time, he denied the equality of black and white Americans, going so far as to state that the Declaration of Independence did not “mean” to say that “all men are created equal.”[7]

Like his brother-in-law Joseph Henry, who relied on a free black man named Sam Parker to assist him in his laboratory, Stephen Alexander also may have employed an African American assistant.

Alfred N. C. Scudder, born free in 1840, was living with his parents in Princeton by the year 1850.[8] Census records show that, by 1860, 20-year-old Scudder was working as a “waiter” in Princeton—likely at the college. Photographs of Scudder preserved by students provide additional hints about his occupation at the college. One from the 1860s or ‘70s depicts him posed in front of a cloth backdrop, dressed in a long jacket and bow tie, and holding a key; on the back of the photo, a handwritten note reads “Janitor of Clio Hall.” A second photo from 1862 shows Scudder seated, in a dark coat and plaid cravat. In the earliest, from around 1859, Scudder sits with arms crossed and stares into the camera. Under the photo, someone wrote “Alfred N. C. Scudder Asst Prof of Nat. Phil. (or Buck).” 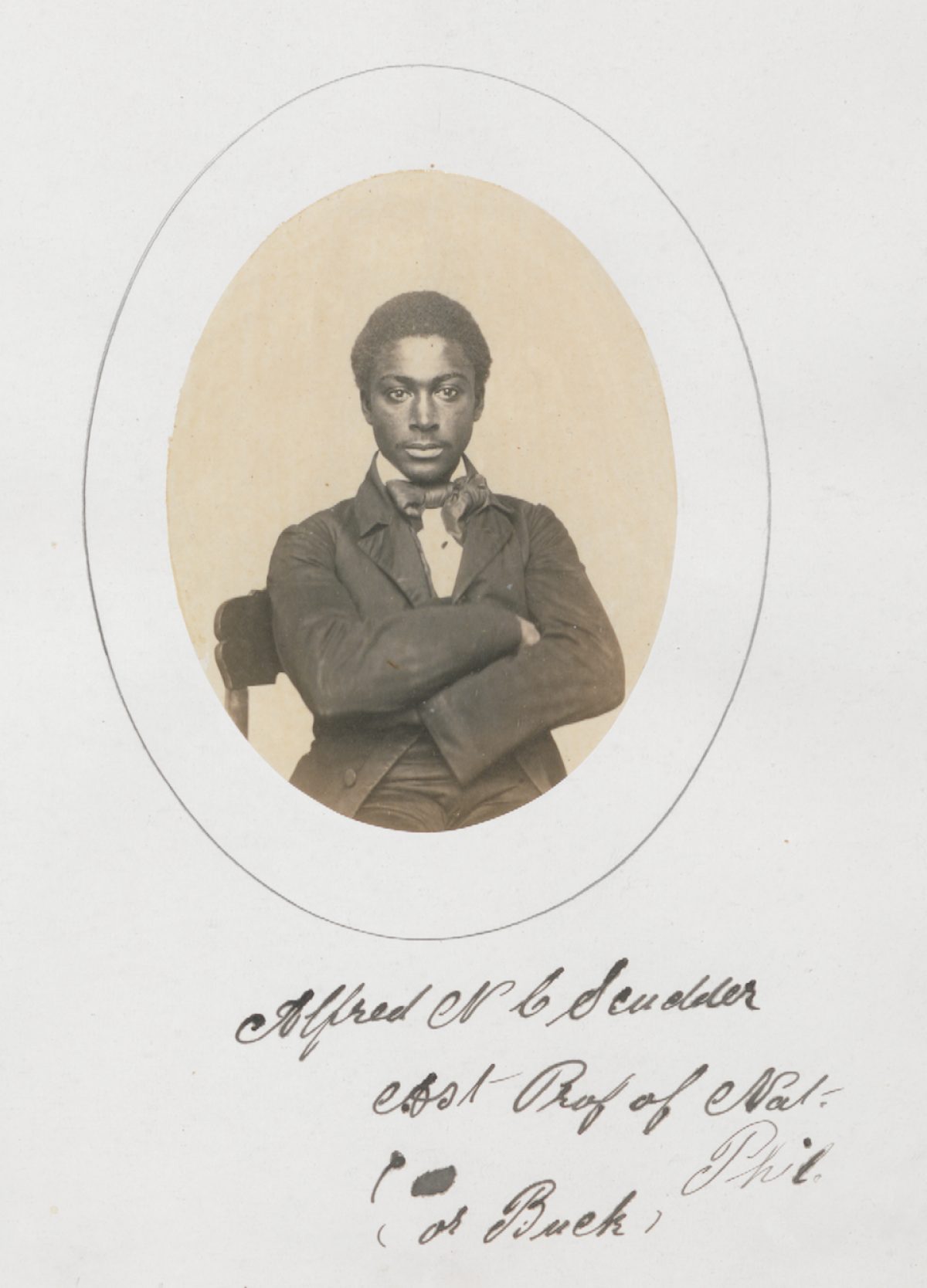 Alfred Scudder, circa 1859. The photograph is captioned "Asst Prof of Nat. Phil (or Buck)"

The honorific “professor” may have been tongue-in-cheek, and the use of the nickname “Buck”—a common term for an enslaved man at the time—hints at students’ disdain for African American workers on campus. However, there was indeed precedent for free black men assisting Princeton’s science faculty during the 19th century. Joseph Henry, a renowned scientist of the time who later became the first Secretary of the Smithsonian Institution, employed an African American man named Sam Parker in the 1840s. Stephen Alexander, who conducted laboratory experiments with Henry during this time, likely saw Parker working in the lab, solving technical issues with equipment, and participating in classroom demonstrations.[9]

Alexander would certainly have been familiar with the practice of hiring African American assistants, and Henry’s example may have influenced him to employ Alfred Scudder in a similar role. The fact that students considered Scudder a memorable enough part of their college experience to include multiple pictures of him in their photo albums also suggests that he played a significant role in campus life. 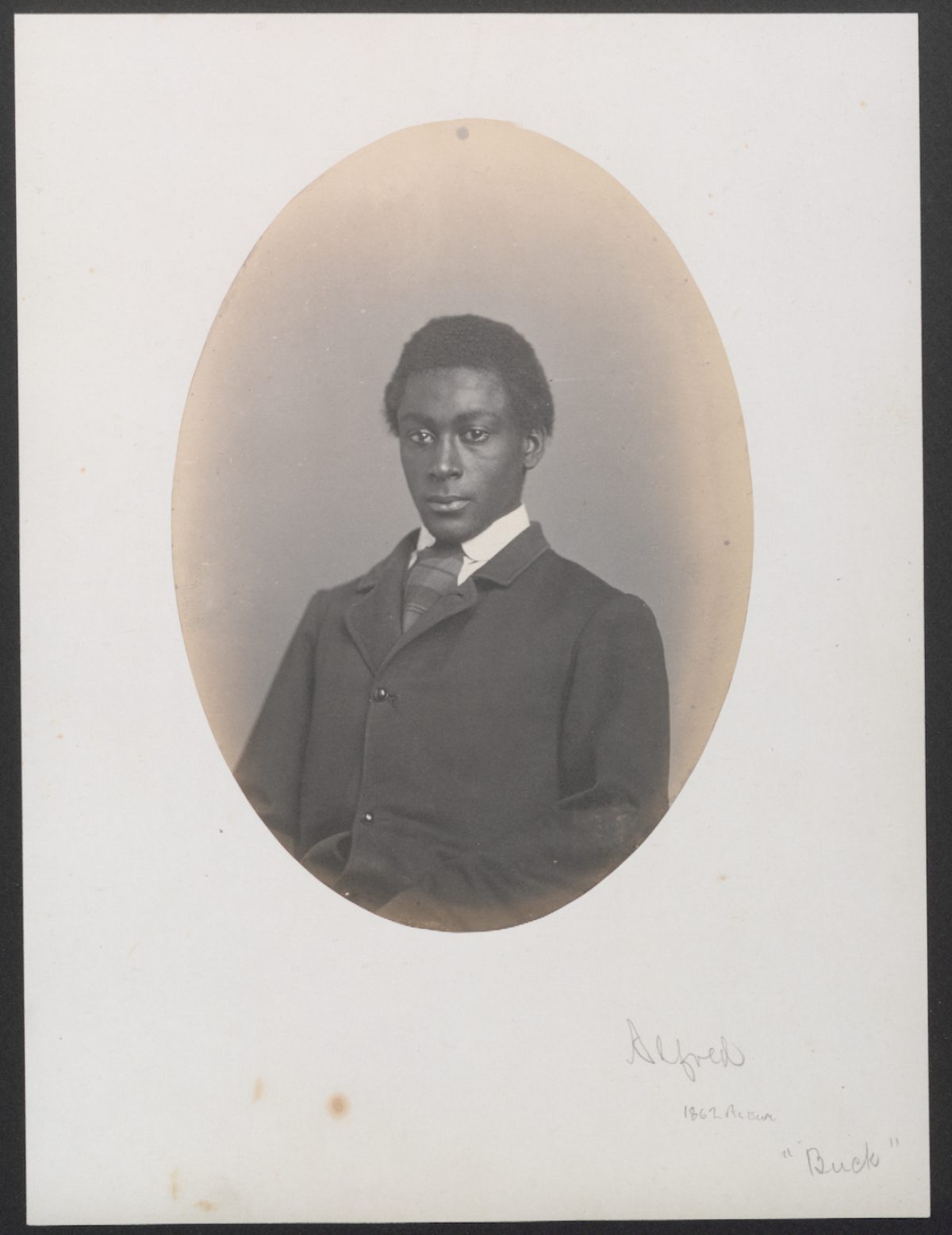 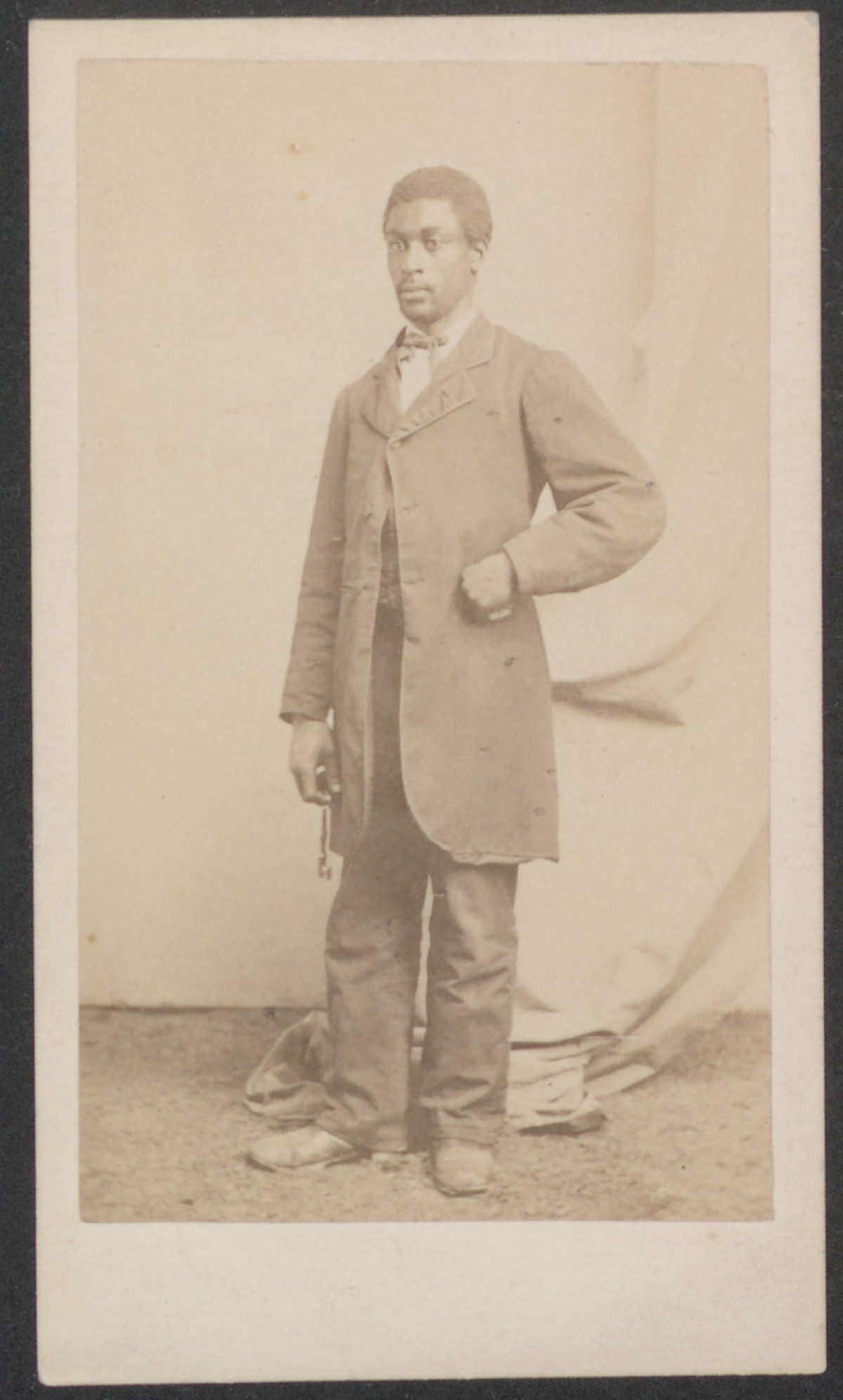 Joseph Henry and Stephen Alexander exchanged ideas about slavery during their lives. On April 26, 1861, six days after the start of the Civil War, Henry wrote a letter to Alexander expressing his concerns. He referenced an article from the National Intelligencer—likely the editorial published on April 22, 1861—which rejected the secession of the southern states and opposed the re-union of the states that had already seceded. Henry posed a question to his brother-in-law:

Is the progress of humanity to be accelerated by conquering the slave states? Is slavery to be abolished and the slave not destroyed?[10]

Henry’s question seemed to express doubt that the end of slavery in the United States would result in the social or political equality of African Americans with whites—an opinion Alexander likely shared.

Both Joseph Henry and Stephen Alexander were members of the American Colonization Society (ACS) and donated to the organization’s local auxiliary chapter, the New Jersey Colonization Society (NJCS).[11] Established by Princeton alumni in 1817, the ACS sought to send free African Americans to the African colony of Liberia as “a compromise,” fulfilling their moral duty to end slavery while also creating a solely white society in the United States.[12] New Jersey’s auxiliary chapter was established in 1824 at the Nassau Presbyterian Church and based in Princeton. In 1845, Stephen Alexander donated $5 to the ACS and he formally became a member of this society in 1866—a year after the 13th Amendment abolished slavery in the country.

Newspaper report of the nation’s first colonization meeting, held in Princeton on November 6, 1816.

In 1865—just months after the end of the Civil War—Stephen Alexander delivered a speech in Princeton on the 89th anniversary of the nation’s independence. In his speech, Alexander reinterpreted the statement in the Declaration of Independence that “all men are created equal.” He argued that the constitution “did not mean to say” that all men are born equal, asking:

With regard to all the “inalienable rights” of “life, liberty and the pursuit of happiness,” all varieties of the race are equal, does it therefore follow that the Esquimau is, in muscular power, the equal of the German or the western back-woodsman?[13]

No! the equality in such cases is far from “self-evident” . . . to admit the equality, in all respects, of all men, and to act in accordance with such a conclusion, would be to ignore the distinction of that variety of the race through whom, almost exclusively, God has hitherto been pleased to govern and bless the world.[14]

Alexander also applied his views on race to Native Americans, referring to the “Indian” as a “foe insidious, treacherous, wily, and cruel.” He further suggested that conflicts with Native Americans has taught white colonists “courage, self-reliance, foresight.”[15]

Alexander emphasized that the perpetuation of slavery was disastrous for the country. He believed that slavery would reduce an entire community to a state “little better than that of barbarism.”[16] Yet Alexander also maintained that all races were not equal, and that people should keep in mind the “peculiarities” in which God created diversity among humans. Ignoring these “peculiarities,” he claimed, would mean that people were neglecting their gifts from God.

Despite Alexander’s attention to questions of morality in his courses and potentially employing a free black man, Alfred Scudder, as an assistant, Alexander denied the equality of all people. His involvement with the colonization society and his speech in 1865 make it clear that, while he opposed the institution of slavery, he believed that white Americans were superior to both Native Americans and African Americans.

Midori Kawaue is a PhD student in the History of Science department at Princeton University. Her research uncovers how the interactions between the indigenous population and colonial settlers from the 17th to 19th centuries produced new scientific knowledge at a global level. She is the co-editor of James Riley Weaver’s Civil War: The Diary of a Union Cavalry Officer and Prisoner of War, 1863–1865 (2019). In 2017, she received the Gilder Lehrman History Scholar Award for her work in American history.

View all stories by Midori Kawaue »

Stephen Alexander’s lecture notes record that “when we say that a stone falls according to the “law of gravity,” we assign a Physical cause. The Intelligent cause of the same phenomena is because God wishes it so. This last is also called a moral and efficient cause. A Final

Cause is the ultimate cause of an Intelligent Being, who is himself the efficient cause. The final cause of many arrangements is the benefit of mankind. It is the ultimate design of a sculptor to show forth some noble sentiment.” Alexander, Stephen; Lecture Notes Collection, AC052, Princeton University Archives, Department of Rare Books and Special Collections, Princeton University Library.