Slavery and the 1820 Trustees

As the institution of slavery slowly declined in 18th and 19th-century New Jersey, the Trustees of 1820 reflected the changing face of pro- and antislavery thought in the state—variously owning slaves, supporting gradual emancipation or African colonization, and advocating for immediate abolition.

Princeton University was established by slaveholders, with its founding trustees and first nine presidents all owning slaves at some point in their adult lives. In its early decades, the college’s relationship to slavery deepened: the Presbyterian ministerswho led the school depended on slave labor to maintain their agrarian estates; the New York City merchants who helped bankroll its operations trafficked in human chattel; and early fundraising drives tapped into the vast wealth of slave societies throughout the Atlantic World.

The egalitarian ideology of the American Revolution, however, altered the landscape of slavery in the young United States. In a flurry of legislation, most northern states passed gradual abolition laws, leading to the slow demise of the institution above the Mason-Dixon line. New Jersey, however, was the last northern state to abolish slavery. In 1804, the New Jersey legislature passed “An Act for the Gradual Abolition of Slavery,” which stipulated that any child born of slave parents after July 4, 1804 would be freed after a period of apprenticeship to their mother’s master (women for twenty-one years and men for twenty-five years). In 1846, the legislature passed an additional “Abolition Act,” which nominally abolished slavery yet also hardened the apprenticeship system, as all of the remaining slaves became “apprentices for life.” These laws, according to historian James Gigantino, meant that although slavery was technically abolished in New Jersey, slaves were not actually emancipated. That is to say, although slavery ended as a legal institution, New Jersey slaves were not decisively released from coercive systems of social control.[1]

Yet even as the institution slowly withered in New Jersey during the early 19th century, many Princeton trustees maintained close ties to slavery. Of the seventeen trustees in 1820, at least seven were slaveholders.

Between Slavery and Freedom

During the colonial period, evidence of slaveholding was captured in the paper trails of everyday life. Slaves were mentioned in letters, recorded in account books, certified in wills, and described in newspaper advertisements. For example, trustee Robert Lenox, a wealthy New York City merchant, peddled exotic goods from all over the world. He sold everything from India sugar and Upland cotton to Lisbon wine and Jamaica rum.[2] In 1817, one of his goods—a twenty-three-year-old slave named Abraham Sherritt—ran away, leading Lenox to place a newspaper ad offering a twenty-dollar reward for “apprehending and securing” the “good looking young [black] man.”[3] 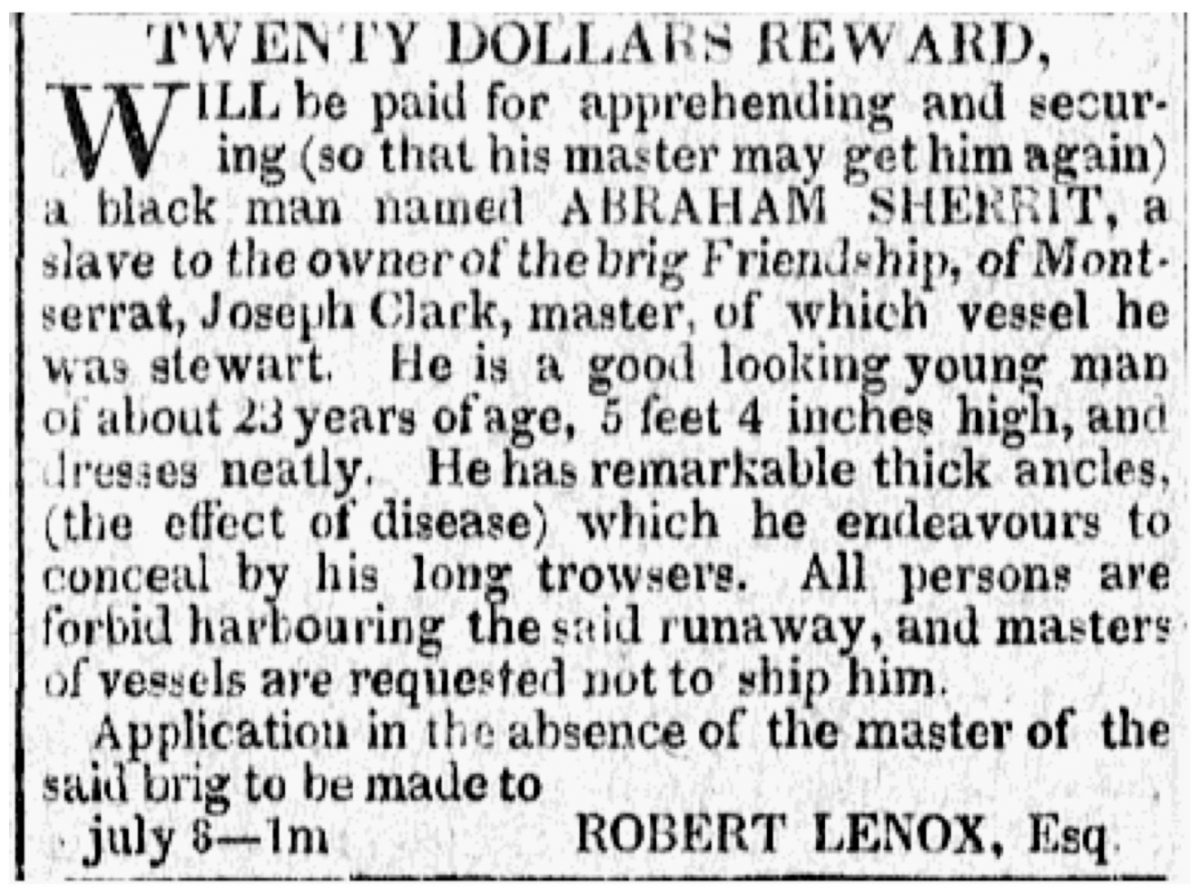 Runaway advertisement placed by trustee Robert Lenox for the return of his slave Abraham Sherrit. 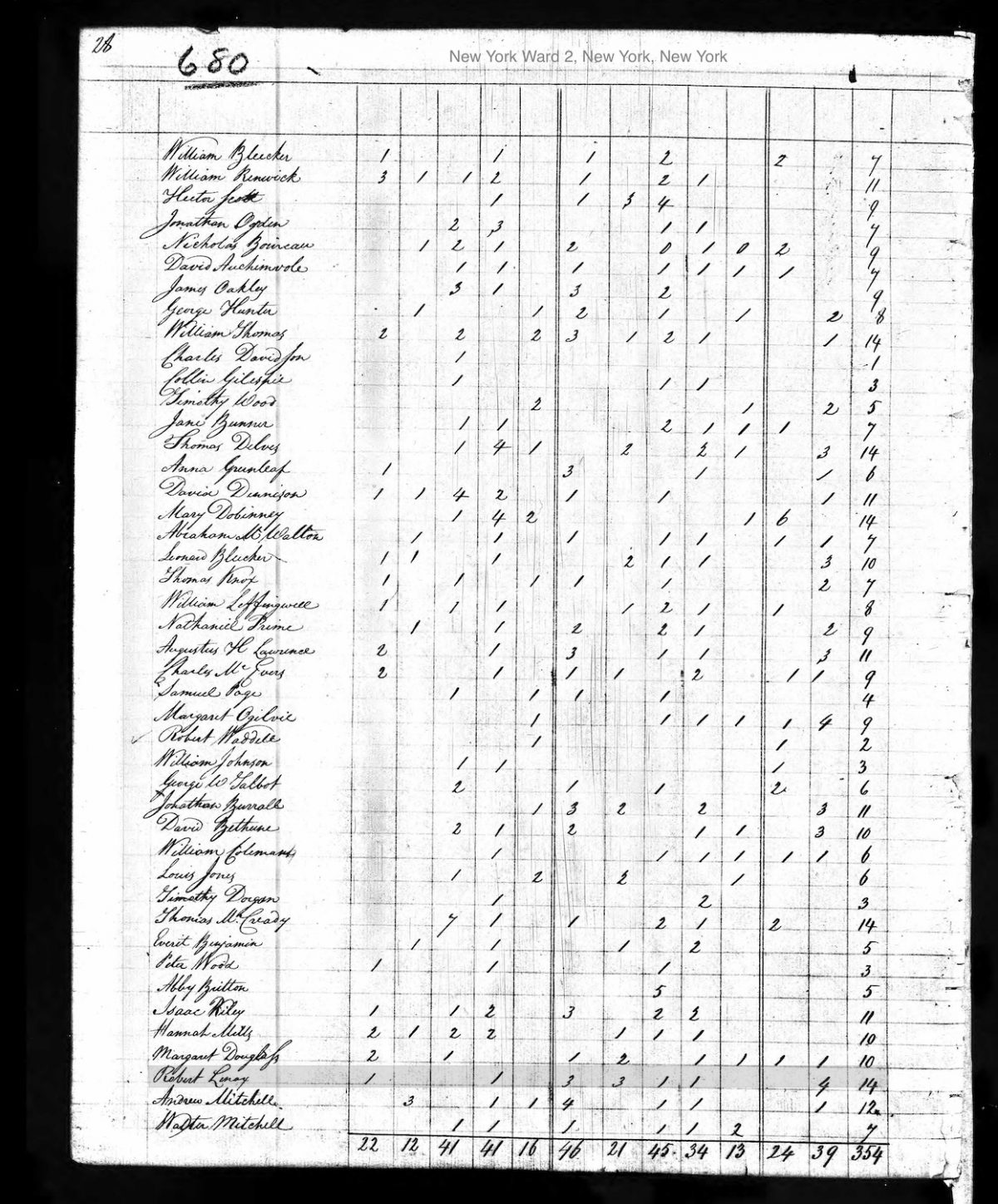 After the Constitutional Convention, an authoritative new source—the decennial census—tabulated slaveholding nation-wide. In rows and columns, slaves were represented as either tally marks or numbers, codifying the cold arithmetic that turned people into property, subjects into objects, human lives into ink marks. Thus according to the 1810 Federal Census, trustee Andrew Bayard owned three slaves. In 1830, trustee Andrew Kirkpatrick owned one slave.[4]

In census records, the line between slavery and freedom seemed clear. An ink mark on one side of the column indicated “slavery,” a mark on the other “freedom.” But these marks could be misleading. As historian Stephanie Smallwood argues, these classificatory systems concealed “the messiness of history, erasing from view the politics that underlay the neat account keeping.”[5] The line between slavery and freedom in New Jersey was actually quite slippery. 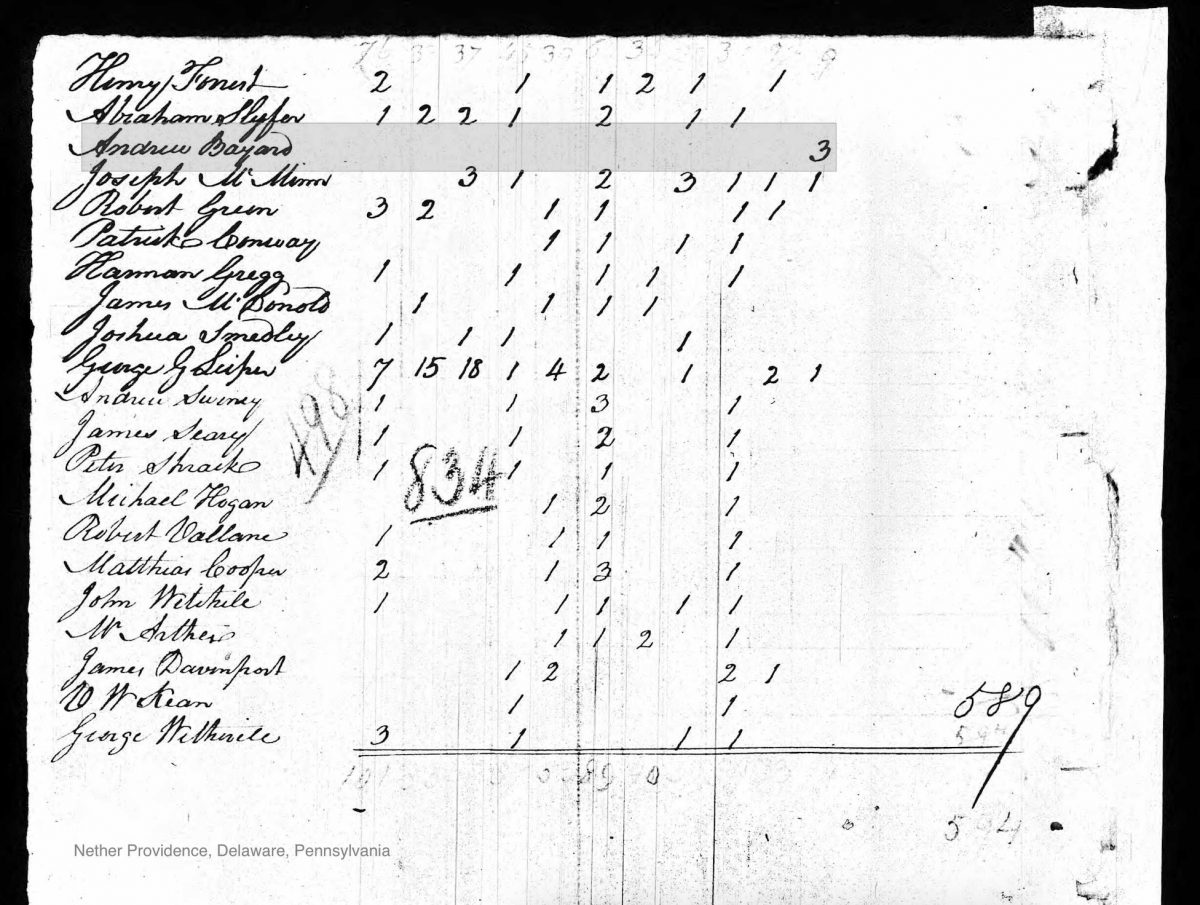 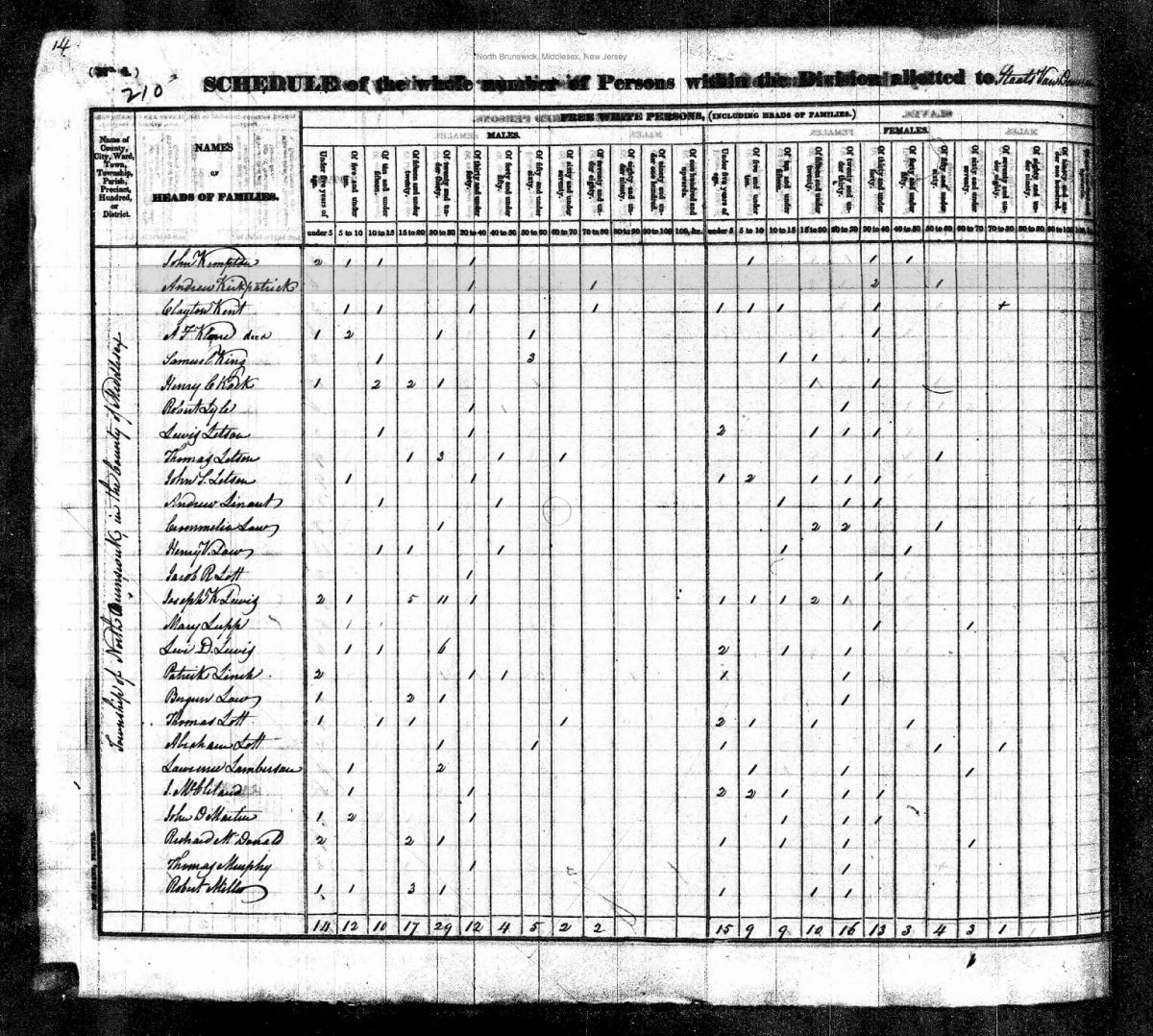 In 1825, trustee George S. Woodhull, a distinguished Presbyterian minister, manumitted two slaves: Perry and Celia.[6] But in the 1830 census, Woodhull’s household included five “free colored persons.”[7] Were Perry and Celia among those five, possibly still working for Woodhull five years after their manumission? Similarly, in 1796, a fourteen-year-old slave named Will was bound to trustee Charles Ewing’s family for eleven years, a term of servitude set to end with Will’s manumission.[8] In the 1830 census, the household of Charles Ewing included one “free colored person,” a woman.[9] Whatever happened to Will? Census records neither recorded the names of slaves nor the details of these individuals’ lives in bondage, leaving these questions unanswered and unanswerable. 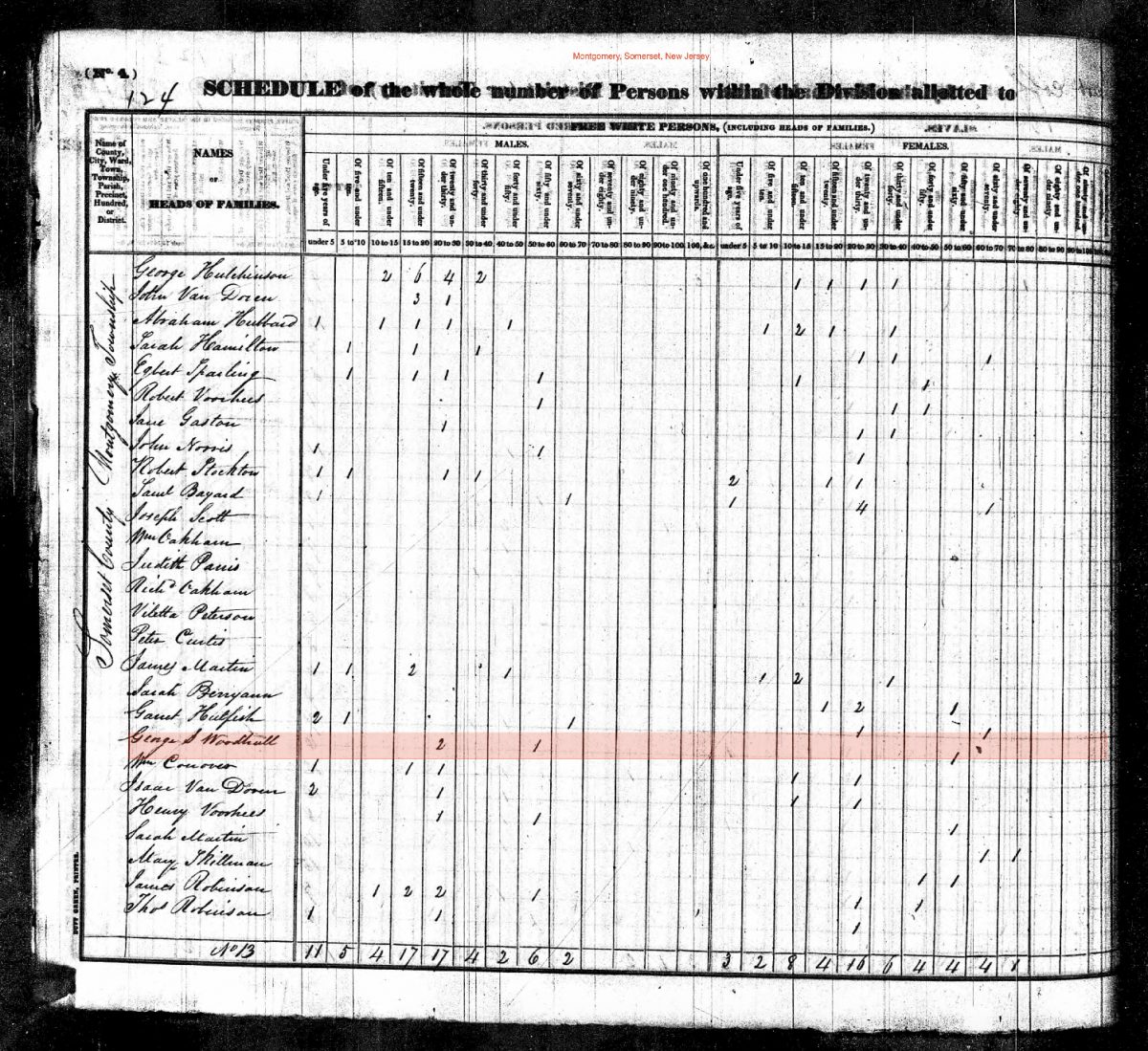 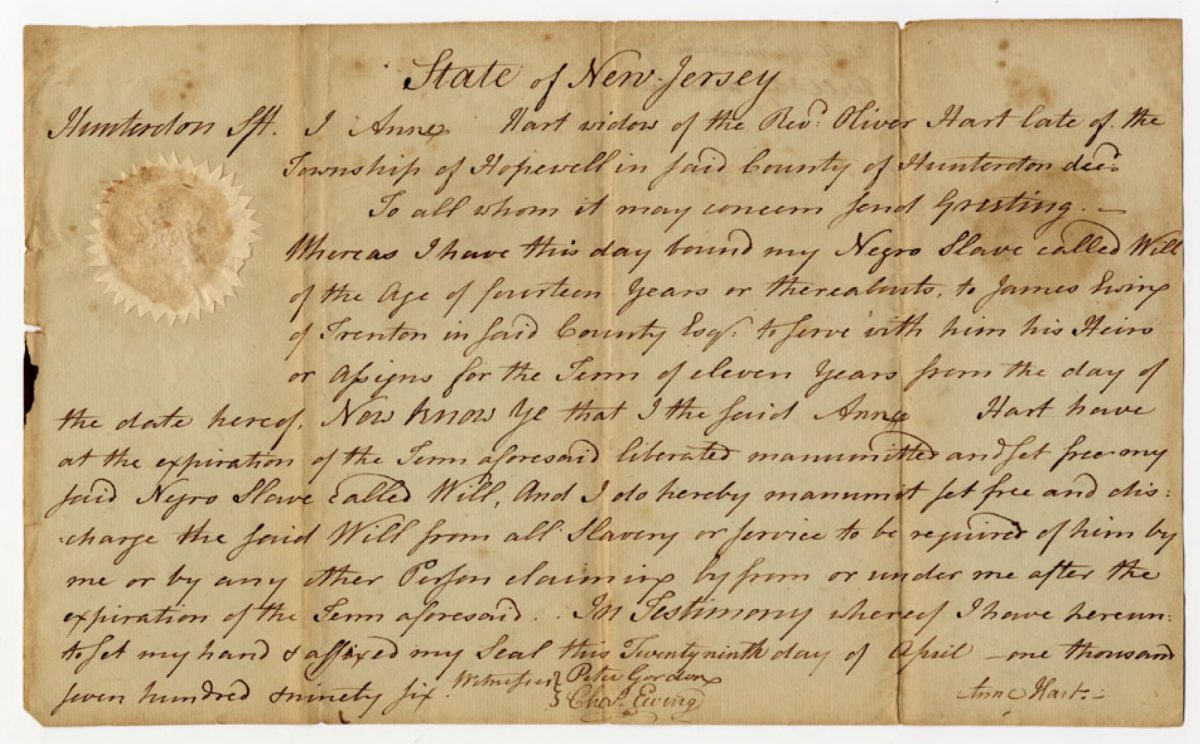 1796 manumission papers for Will, a slave bound in service to trustee Charles Ewing's family. 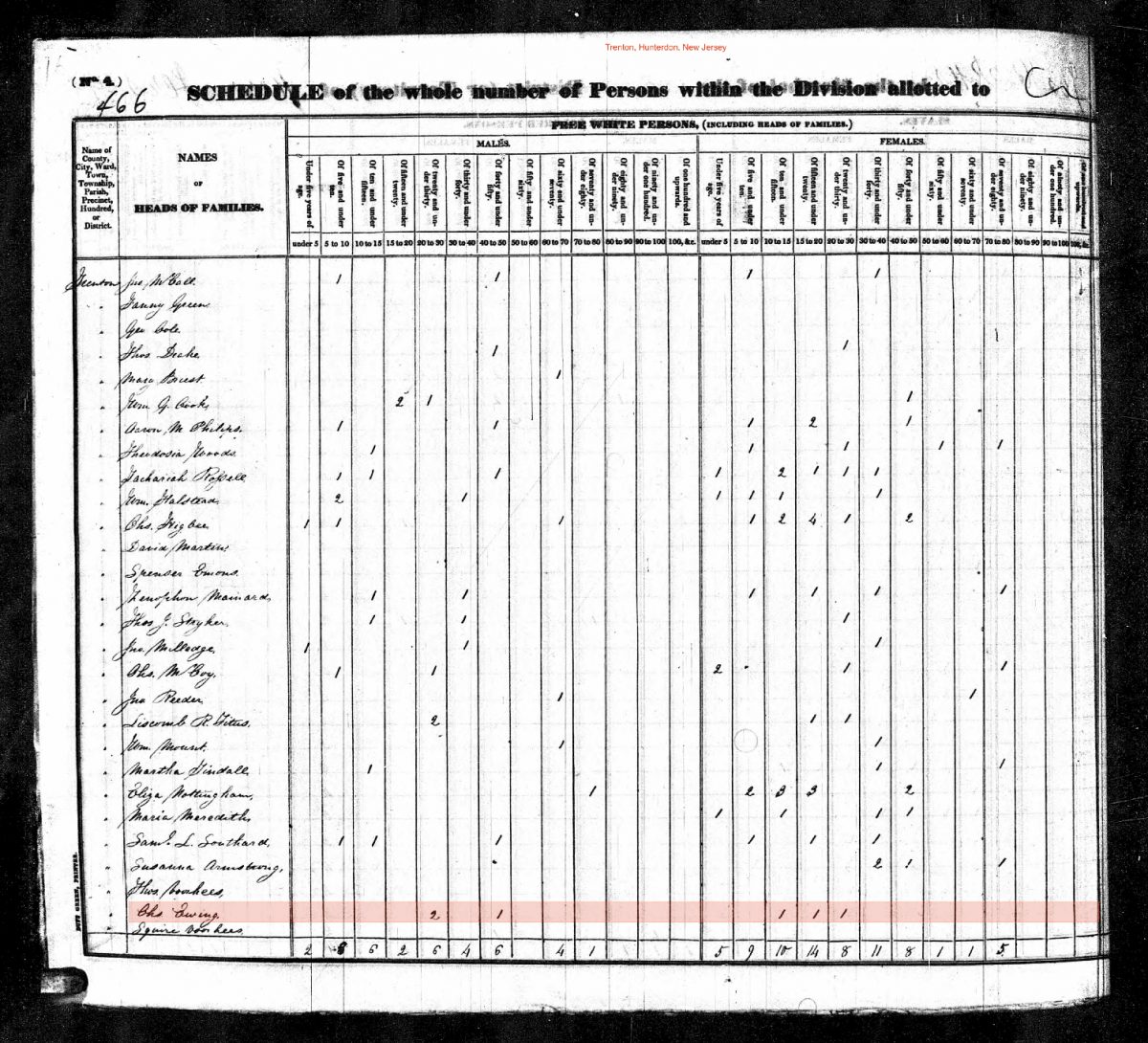 Sometimes other sources captured the messier histories behind the tally marks. For example, the 1804 Abolition Act required slaveholders to register any child born to a slave with the county clerk. In 1809, trustee John Van Cleve submitted that his slave, Phebe, had given birth to a son named Jim.[10] Under the stipulations of the gradual abolition law, Jim would be freed after twenty-one years of servitude. Though Princeton president and trustee Ashbel Green condemned slavery as “utterly inconsistent with the law of God,” he left record of his slaveholding in his own diary.[11] Indeed, Green kept at least three slaves with him in the President’s House during his tenure as president (1812-22). Discussing two teenage slaves in his diary, in 1813 Green wrote, “I told them both that if they served me to my entire satisfaction and that of my wife, I would give to each of them a year of their time.”[12]

Together, these extant sources—census records, manumission certifications, diaries, newspaper ads—confirm that at least seven of the 1820 trustees maintained close ties to slavery. But it should be emphasized that these sources are inherently fragmentary, leaving many gaps. Further research into the personal records of the other ten trustees might also uncover connections to slavery.

The 1820 trustees were an ideologically diverse group. Though many were slaveholders, at least a few expressed openly antislavery sentiments in treatises, sermons, or other writings. Certain strains of northern antislavery thought can be traced to the American Revolutionary period, when many noted the contradiction of proclaiming freedom in a society dependent on slavery. “In this country…the plans of which are still stained with the blood shed in the cause of liberty,” declared trustee Samuel Miller in 1797; “in this country there are slaves!—men are bought and sold! Strange, indeed!”[13]

As the sectional crisis intensified in the 1850s, abolitionists spoke and wrote with even greater urgency. Seeking to calm the nerves of his countrymen, trustee Jacob Jones Janeway counseled patience:

Our divine Redeemer will, by his infinite wisdom and almighty power, solve the problem of Slavery, in his own way, to the entire satisfaction and admiration of all real Christians.

At the appointed time, Janeway continued, the Redeemer would “give freedom to enslaved Africans.”[14]

Trustee Isaac Van Arsdale Brown, for his part, did not intend to wait for divine intervention. In a stinging broadside, Brown called slavery “a fungus, or spurious growth, of a blighted soil and degenerated clime, nourished and kept alive to this hour by the same element of rottenness which at first gave it existence.” Slavery was “irreconcilable with Christianity and sound reason,” and nothing but its immediate eradication could affirm “the claims of the colored man to that inviolable freedom which his Creator has conferred upon him in common with others of fair complexion.”[15] Brown never lived to see the end of slavery in the United States, however. He died on April 19, 1861—exactly one week after the first shots of the Civil War were fired at Fort Sumter, South Carolina.

When the Civil War broke out, there were still eighteen slaves on the books in New Jersey.[16] And at the end of the war, when Congress sent the Thirteenth Amendment to the states for ratification at the conclusion of the war, New Jersey initially rejected it. Not until a second vote in January 1866 did New Jersey ratify the amendment, finally abolishing the last remnants of slavery in the state.

As historian James Gigantino concludes in his study of emancipation in New Jersey:

A stroke of the pen did not make anyone ‘forever free’ but instead drew a blurry line of demarcation between slavery and freedom, one that whites and blacks struggled to constantly define and redefine.[17]

Ultimately, freedom in New Jersey was not a singular event but an ongoing process. And the men who served as Princeton trustees in 1820 were on both sides of that struggle, contributing both to the pro- and antislavery thought and practices that influenced the process of emancipation.

Mike Glass studies twentieth-century American urban and education history. His current research project examines conflicts over housing and schools in metropolitan New York City. In particular, he is interested in how social, political, and economic forces interacted to create and maintain segregation and inequality. Mike received his B.A. in Sociology from the University of Chicago in 2008, an M.S. in Education from the City College of New York in 2010, and an M.A. in History from Hunter College in 2015. Before coming to Princeton, Mike taught history in New York City public schools from 2008 to 2015.

Minutes of the General Assembly of the Presbyterian Church in the United States of America From Its Organization A.D. 1789 to A.D. 1820 Inclusive (Philadelphia: Presbyterian Board of Publication, 1847), 692-694.

Samuel Miller, A Discourse, delivered April 12, 1797 at the request of and before the New-York Society for Promoting the Manumission of Slaves, and Protecting Such of Them as Have Been or May Be Liberated (New York: T. and John Swords: 1797), 19.

J.J. Janeway, Hope for My Country: Showing the Divinity of Jesus Christ, and His Care Over His Church, as Exhibited in the Past History of Our Country (New Brunswick, NJ: Press of J. Terhune, 1856), 60.

Gigantino, The Ragged Road to Abolition, 8.