To say that the intellectual ties between Princeton and the Presbyterian South run deep would be to understate the pioneering role Princeton men played in the region. Princeton-educated ministers and teachers served as founders and trustees of schools across Virginia, North Carolina, Kentucky, Tennessee, South Carolina, and Georgia in the 18th and early 19th centuries.

Princeton graduates brought distinct pedagogical values to southern higher education. Although the College of New Jersey’s founders declared their intention to educate students of all religious denominations, nineteen of Princeton’s first twenty-three trustees were either Presbyterian ministers or Presbyterian laymen, marked by their “seriousness of manner, perseverance and devotion to duty.”[1] Essentially, to be Princeton-educated in the 18th century was to embody a highly disciplined Presbyterian intellectualism. As one writer aptly summarized:

To send a student to Princeton was to commit him to Samuel Davies or John Witherspoon for the formation of his character, for the discipline of his faculties, and in some measure for the direction of his subsequent life.[2]

Davies and Witherspoon, Princeton’s fourth and sixth presidents respectively, were particularly influential mentors for graduates who later became ministers and educators in the South.

Princetonians found a strong foothold in Virginia, where Scots-Irish Presbyterians had established communities beginning in the early 18th century. Here, Samuel Davies helped found a school in Louis County that provided a model for other classically-oriented schools in the region. Meanwhile, two of John Witherspoon's students—Samuel Stanhope Smith, who would become Princeton’s seventh president, and Reverend William Graham (class of 1773)—founded Hampden-Sydney College in Hanover, Virginia in 1774 and Augusta Academy (known today as Washington and Lee University) in 1782.[3]

Under the leadership of Reverend Hugh McAden ('1755), Princetonians established Orange Presbytery in North Carolina and infused their values into a number of the colony’s earliest schools, including Crowfield Academy, Queen’s College, and Zion-Parnassus Academy.[4] Again thriving within an established Scots-Irish Presbyterian community, Princeton graduates provided leadership in developing curricula and securing charters. William Richardson Davie (‘1776), Samuel E. McCorckle (‘1772), and Joseph Caldwell (‘1784)—all students of John Witherspoon—were involved in the founding of the University of North Carolina.[5]  As Caldwell’s stepson William Hooper noted: 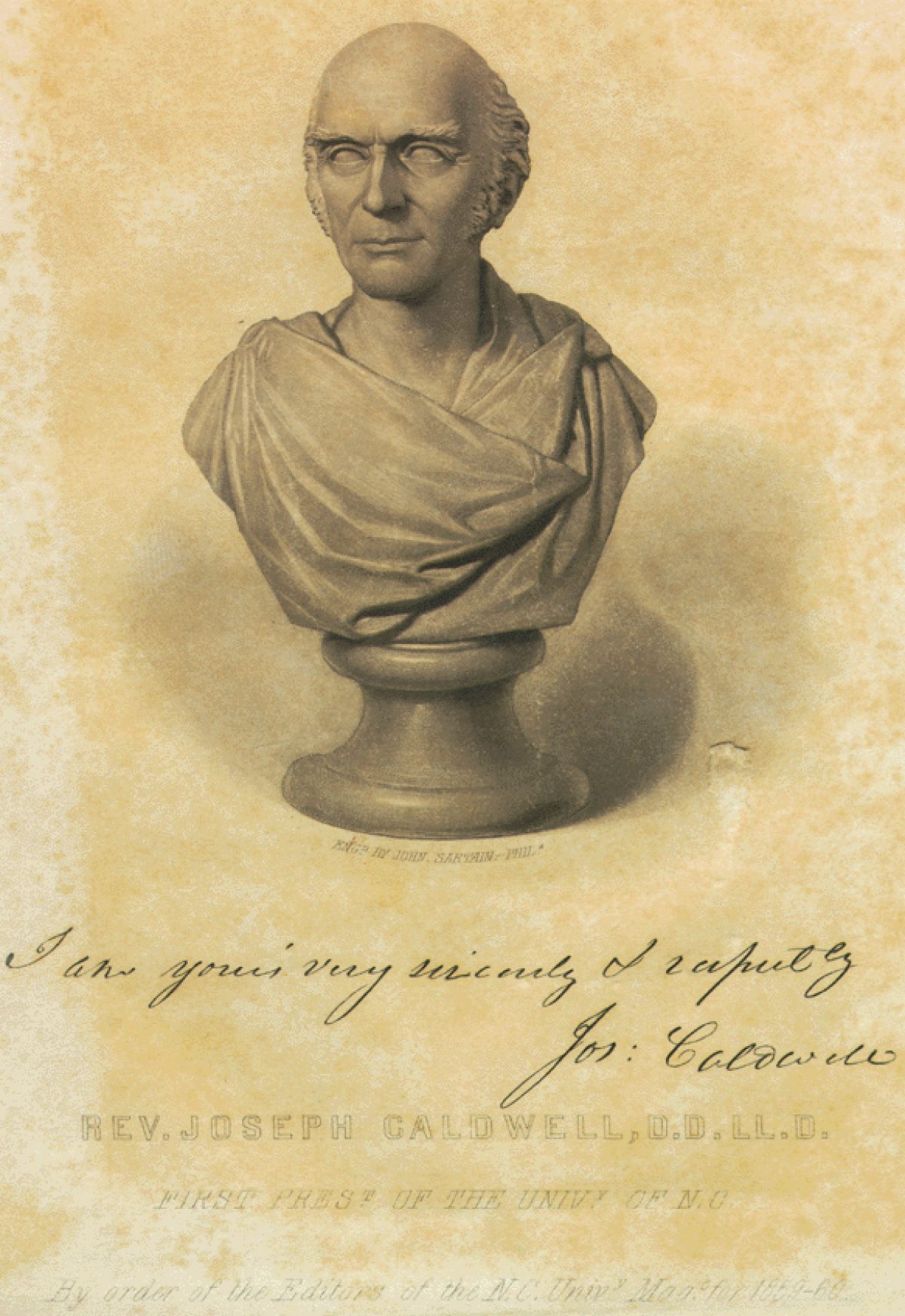 Image of a bust of Joseph Caldwell for his biography. Caldwell was a College of New Jersey graduate and the first president of the University of North Carolina (UNC) where, “all things were fashioned after the model of Princeton College.”

In Kentucky, Princeton graduate and Hampden-Sydney co-founder David Rice (‘1761) served as the first chairman of trustees for the Transylvania Seminary—one of the state’s inaugural institutions of higher education, established in 1780. When Presbyterian influence over the seminary dwindled in 1818, Rice and others moved to create Centre College in 1819, appointing Reverend Jeremiah Chamberlain as its first president. Chamberlain was himself a graduate of the Princeton Theological Seminary class of 1817.

Presbyterian minister Samuel Doak (‘1775) left his position as a tutor at Hampden-Sydney to organize Washington College in eastern Tennessee in 1788. Doak was known as a “rigid opposer of innovation in religious tenets” in his role.[7] Doak later moved to Bethel to head Tusculum Academy before it was consolidated with another Princetonian-led school, Greenville College, in 1762.  Princeton graduates also helped charter what would become the University of Nashville and the University of Tennessee.

In South Carolina, where schools developed slowly, Princeton’s influence was limited but significant. Princeton graduates taught at some of the early colleges established in Charleston, Winnsborough, and Ninety-Six.[8] James Hall (‘1744), established a preparatory school called Clio’s Nursery; one of his students, the Reverend Moses Waddell, went on to found the prestigious Willington school in 1804.[9]  Waddell was also a graduate of Hampden-Sydney in Hanover, Virginia, where Samuel Davies’s influence as a preacher in the mid-18th century remained strong. Like his predecessors, Waddel brought a “methodical, exhaustive, earnest” character to Willington that reflected Princeton’s Presbyterian tradition.[10]

Princetonians were less successful establishing schools in Georgia due to the relative weakness of the Presbyterian community there. However, following a series of unimpressive presidencies, the University of Georgia (then Franklin College) appointed Moses Waddel president in 1819. Waddell brought the strict discipline he’d inculcated at Willington, spurring the college’s growth and development.[11]

Although Princeton graduates’ influence was strongest within pre-existing Scots-Irish Presbyterian communities, their distinct mode of disciplined, rigorous pedagogy shaped schools all throughout the South in the 18th and early 19th centuries—ultimately creating a deep and rich intellectual tradition with lasting influences on higher education in the region.

View all stories by Cailin Hong »

The author is indebted to Donald Robert Come, whose article “The Influence of Princeton on Higher Education in the South before 1825" provided the foundation for this essay.

Come, “The Influence of Princeton on Higher Education in the South before 1825,” 389.

Come, “The Influence of Princeton on Higher Education in the South before 1825,” 392.