The 19th-century residents of the historic Walter Lowrie House, John P. Stockton and Paul Tulane, were prominent Princeton residents with connections to southern slavery and the Confederacy. The Lowrie House now serves as the official residence of the president of Princeton University.

The Walter Lowrie House at 83 Stockton Street is an imposing Italianate mansion that has served as the official residence of the president of Princeton University since 1968. The house takes its name from Walter Lowrie, a graduate of the Princeton Theological Seminary who went on to become an important translator of Danish philosopher Søren Kierkegaard. Lowrie’s wife, Barbara Armour, originally inherited the property from her father George Armour (class of 1877), a wealthy Chicago businessman. Barbara Armour gave the property to Princeton University in 1960, with the house briefly serving as a campus guest residence before becoming the president’s residence in 1968.[1]

Long before it housed university presidents, however, the mansion’s early residents drew their power and prestige in Princeton from their connections to the American South. The property now known as the Lowrie House was geographically far from southern slavery during the antebellum period. But two of its most prominent residents were Princeton men whose fortunes—both political and financial—were deeply interconnected with the slaveholding South and the Confederacy. The history of the Lowrie House reveals Princeton to be a place where the barriers between North and South were particularly permeable. 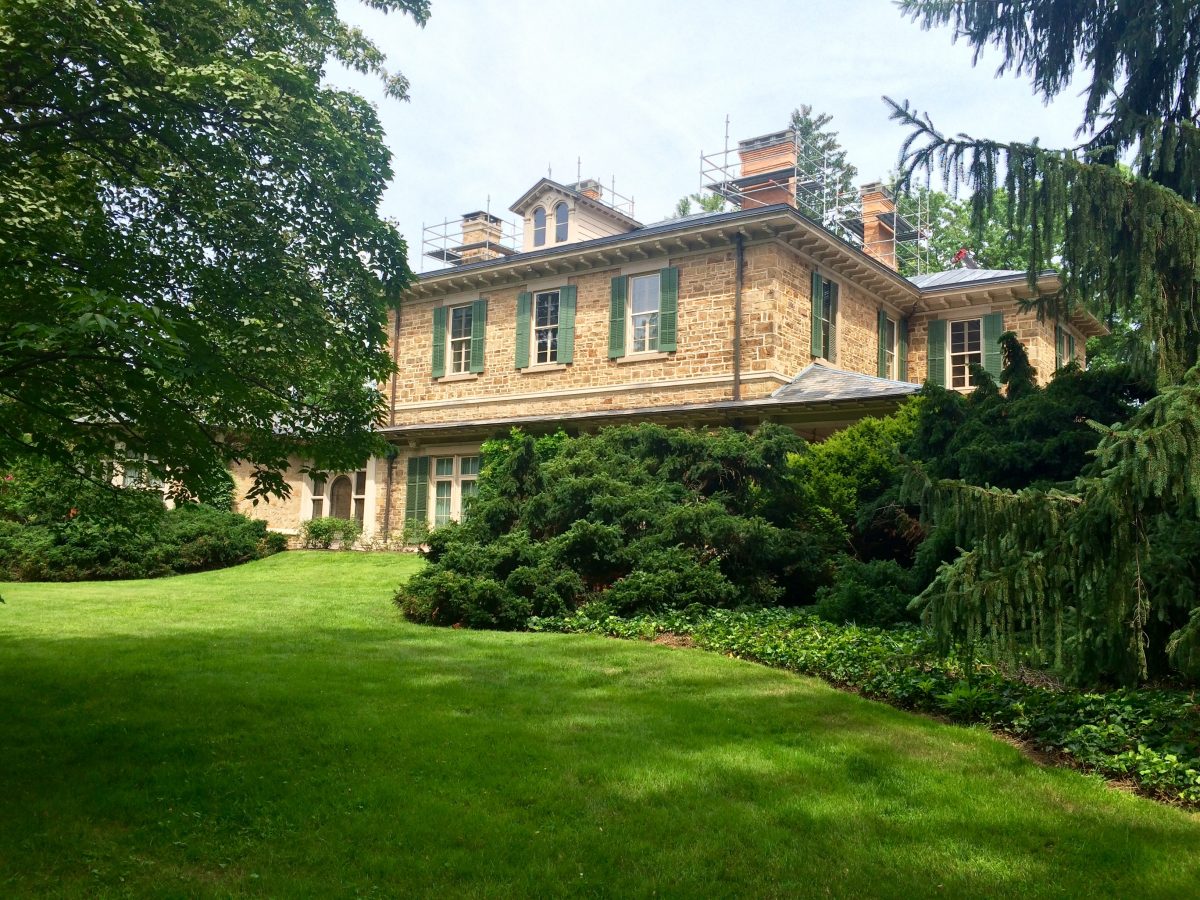 Photograph of the Walter Lowrie House in Princeton, NJ.

The mansion was built in 1845 for John P. Stockton, a member of one of New Jersey’s most powerful and well-connected slaveholding families.  Stockton had deep roots in Princeton: he was the son of Robert F. Stockton, United States Navy commodore and prominent member of the American Colonization Society, and graduated from the College of New Jersey (now Princeton University) with the class of 1843. After beginning his career as a lawyer, Stockton entered the New Jersey state legislature as a Democrat. Stockton’s pro-Southern sympathies brought him a long and successful career in New Jersey politics, the only northern state where Abraham Lincoln failed to carry the popular vote in the presidential election of 1860. At the state Democratic convention of 1862, he joined his party in opposing the emancipation of enslaved people in New Jersey. In 1865, Stockton was elected to the United States Senate.[2]

At the time of Stockton’s election, Republican legislatures were facing hostility from President Andrew Johnson in their attempts to secure greater civil and political rights for African Americans in the former Confederacy. Senate Republicans successfully challenged Stockton’s election on a technicality, resulting in his removal from office in 1866. Without his removal, Senate Republicans might have failed to override Johnson’s veto of the Civil Rights Act and other key Reconstruction-era legislation.

Outraged by Stockton’s removal, New Jersey state legislators attempted but failed to revoke their state’s ratification of the Fourteenth Amendment, which granted due process and citizenship to African Americans.[3] Stockton was elected to the United States Senate again in 1869 (this time successfully) and to the position of the Attorney General of New Jersey in 1877, a post he held for twenty years.[4]

Paul Tulane, a merchant and later a prominent American philanthropist, purchased the Stockton mansion in 1860.[5] Tulane had spent the early years of his life in the Princeton area, where for at least some time during his childhood his family employed a former slave named Sylvia Dubois as a domestic servant.[6] Tulane left his formal schooling at age fifteen to begin working as a merchant’s clerk in Princeton, after which he decided to enter commerce. Tulane had strong pro-southern sympathies, making his fortune in New Orleans in the menswear business. Tulane was deeply concerned that the national economy would suffer if the United States abolished slavery, and purchased real estate in both the North and South to hedge against potential financial losses.[7]

After the Civil War broke out in 1861, Tulane arranged with New Jersey’s Governor, Charles Olden, to make his way back to the South where—according to at least one account—he became a generous financier of the Confederate war effort.[8] After the war, Tulane returned to Princeton, where he turned his efforts to “helping young people from various walks of life obtain an education.”[9] African-American students did not figure into Tulane’s vision for his most ambitious charitable educational project; his endowment of Tulane University in New Orleans was, according to his wishes, to be used only for the education of “young white persons.”[10] Tulane University administrators used this stipulation in Paul Tulane’s endowment of 1881 to justify keeping the university segregated until well into the 20th century.[11]

View all stories by Dan Ewert »