Lincoln and the Election of 1860

Princeton students engaged in heated debates over slavery during the contentious 1860 election, in which New Jersey was the only northern state where Abraham Lincoln lost the popular vote.

The chants grew louder as the shadows lengthened on the evening of Friday, December 2, 1859. “Down with Henry Ward Beecher! Down with Seward! John Brown, the horse thief, murderer and martyr!” Perhaps inspired by Brown’s hanging just hours earlier in Charles Town, Virginia, these and other slogans adorned torch-lit banners lofted high above a procession of Princeton University students who marched through town toward the heart of campus.[1] The students dragged two human effigies with them, and as a reporter on the scene from Philadelphia wrote: “in front of the College Seward and Beecher were consigned to the flames amid groanings and cheers,” symbolically joining Brown as martyrs for the abolitionist cause. The ritual executions were witnessed by “a large crowd of spectators from the town.” Then came “repeated calls for various [student] leaders…and the hearty cheers which greeted their sentiments” as they rose to give speeches denouncing abolitionism. The episode underscored the divisive political climate at Princeton prior to the election of 1860.[2]

The students’ fiery rejoinder to the abolitionist tone of the 1860 election was, perhaps, less surprising to the college and its small New Jersey town than we might think. A Boston journalist reporting on the effigy burning noted that a “considerable number of southern students” shaped Princeton’s culture despite the college’s location in a free state, and pro-southern sentiments pervaded Princeton's ostensibly northern environs.[3] Indeed, just six months before Beecher, Brown, and Seward drew the students’ ire, a newspaper columnist from nearby Newark asked, “are not these abolitionists as bad as the slave trade revivers of the Southern Convention?” Continuing to attack abolitionism, the columnist wrote:

The [William Lloyd] Garrison faction is nothing, only a pack of mad fanatics without influence or possible plans, whose vocation only is to curse and swear against the Union and its supporters.[4]

Anti-abolitionist Princeton students had plenty of allies among their Southern classmates and neighbors when they denounced Henry Ward Beecher, William Seward, and John Brown in December 1859. 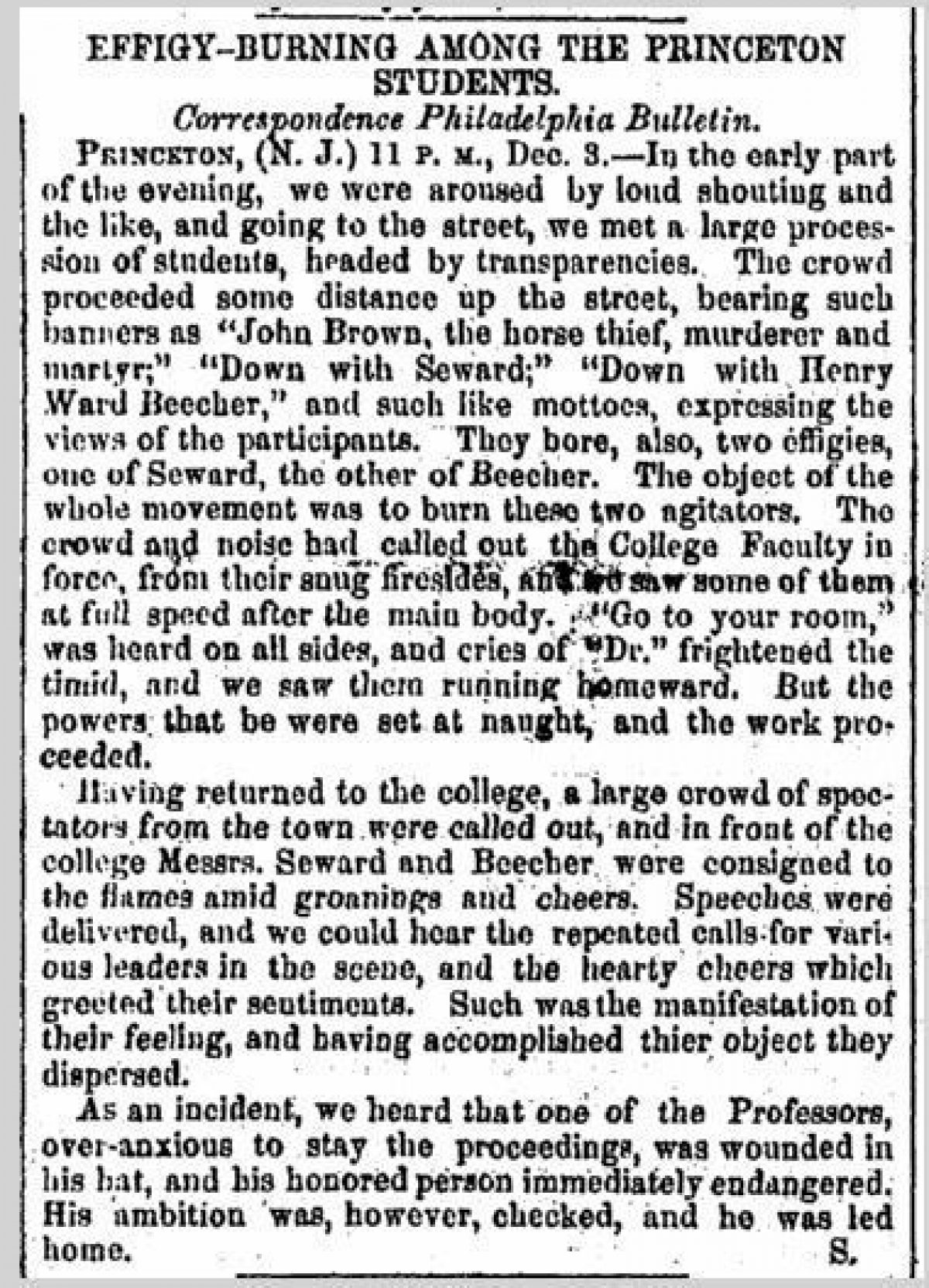 An article in the Richmond Whig, describing the 1859 effigy-burning in Princeton.

Seward had been elected to the United States Senate in 1849 and won a second term in 1855. An early member of the new Republican Party, he opposed slavery and rose quickly through the ranks of the young party. A “higher law” than the United States Constitution, he said, condemned slavery and those who supported it. After campaigning for Abraham Lincoln during the election of 1860, Seward became Secretary of State, a position he used to fight Southern secession and then to deter foreign involvement in the Civil War. He remained a vocal critic of slavery, for which he paid a price: in 1865, the execution portended by the Princeton students years earlier nearly became reality when Seward was wounded in the assassination that took President Lincoln’s life.[5]

To the effigy-burning Princetonians caught up in the 1860 election, Henry Ward Beecher and John Brown were at least as threatening to the South as Seward. Beecher, a Congregationalist clergyman and brother of famous anti-slavery author Harriet Beecher Stowe, became an ardent abolitionist when the Fugitive Slave Act of 1850 required all citizens in slaveholding and free states alike to return escaped slaves to their masters. After campaigning for John C. Frémont, the Republican Party’s 1856 presidential nominee, Beecher continued to make a name for himself with frequent speeches. He even organized auctions to buy the freedom of enslaved people, and by 1863 Beecher was touring Europe at Lincoln’s behest to advocate the Union’s case for abolition.[6]

The Fugitive Slave Act infuriated John Brown as well, and he spent most of the 1850s advocating for abolition, fighting to bring Kansas into the Union as a free state, and touring the country to raise funds to support his anti-slavery efforts. In October 1859 he attempted to organize an armed slave revolt by seizing a federal arsenal in Harpers Ferry, Virginia. Though daring and provocative, the attack failed, and Brown was arrested and found guilty of treason.[7] To many in the North, Brown was a hero. Henry David Thoreau quickly penned his famous essay, “A Plea for Captain John Brown,” and delivered it in front of crowds throughout New England. Nonetheless, Brown was executed on the morning of December 2, 1859.[8]

To the students who marched through Princeton as evening fell a few hours later, antislavery figures like Brown, Beecher, Garrison, and Seward were not heroes but enemies. And as the students attempted to stake out the campus’s southern allegiance, the stir of their shouts, speeches, and ritual executions rippled through newspapers from Philadelphia to Boston to far-off Sacramento.

On Election Day less than a year later, Abraham Lincoln lost the popular vote in New Jersey, the only free state to vote against him (though he won the support of a majority of New Jersey delegates in the electoral college).[9] After Lincoln won the presidency, he refrained from appearing in Princeton while making a celebratory tour of New Jersey.[10] As the state was conflicted during the election—with the popular vote going one way and the electoral vote the other—Princeton’s allegiances were equally divided.  Four Princetonians signed the Ordinance of Secession in South Carolina on December 20th, 1860. And in the coming years, more than 300 others would fight for the Confederacy during the Civil War.[11] Though Princeton lay north of the Mason-Dixon line that divided Union and Confederacy, students' attachment to the South remained strong.

View all stories by Teal Arcadi »