The Civil War Comes to Princeton in 1861

Tensions between Unionist and Secessionist students reached their peak in 1861, shortly after the outbreak of the Civil War.

As Southern states seceded from the Union after the election of Abraham Lincoln in 1860, tensions at the College of New Jersey escalated as well.  Southern students—who had traditionally represented a large portion of the student body, and comprised roughly 44% of the class of 1861—followed their homes states' lead, withdrawing from the college and leaving New Jersey during the spring of 1861.[1]

Although many colleges cancelled classes altogether as war approached, President John Maclean Jr. was determined to keep the College of New Jersey open and "counseled calmness, forbearance towards the students from the South, and loyalty to the national government."[2] But despite his best efforts, conflict erupted among students just as the Confederate assault on Fort Sumter marked the outbreak of war. 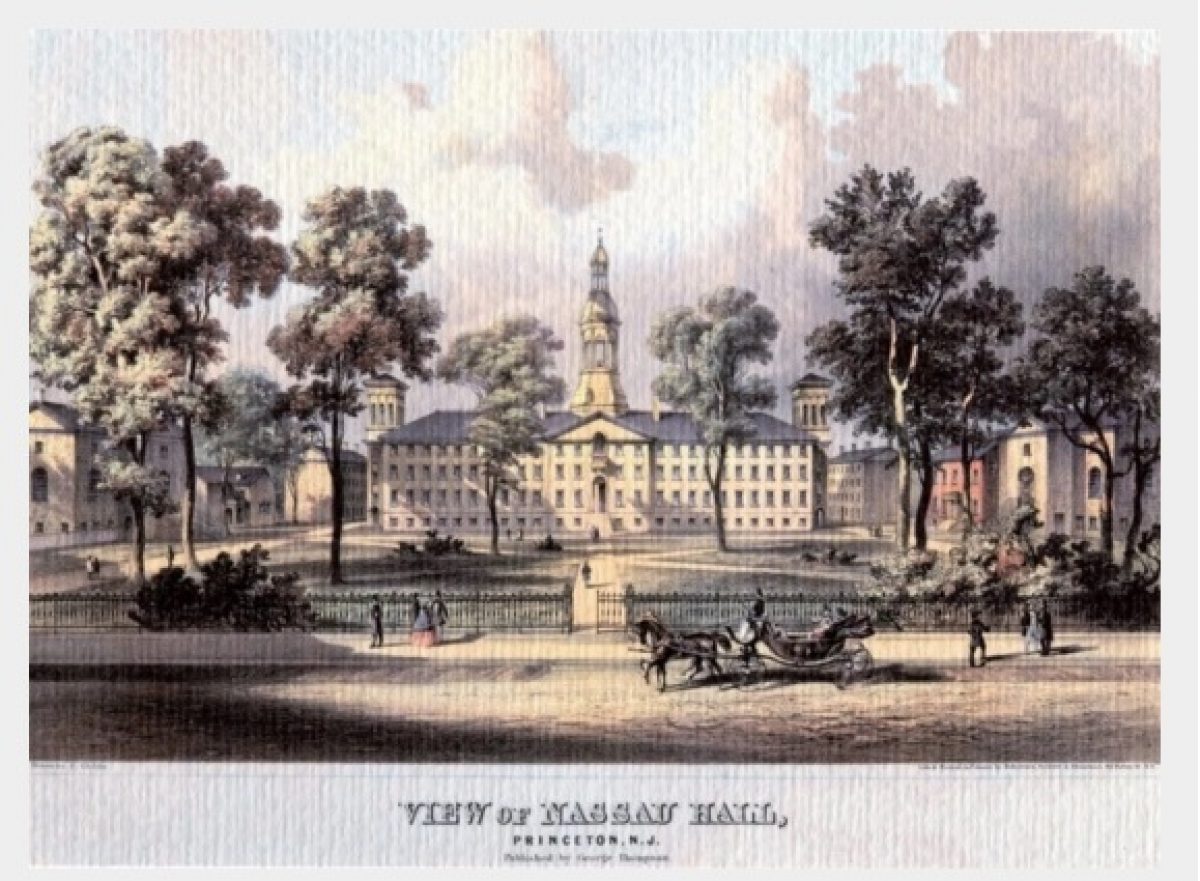 Lithograph of Nassau Hall, circa 1860.

On the morning of April 13, 1861—the day after the First Battle of Fort Sumter—a “hushed and tense” atmosphere loomed over the college, with students loitering together in small groups on campus. At ten a.m., a group of Northern students climbed to the top of Nassau Hall, hung the national flag, and proceeded to host a picnic with food and “beverages of a questionable sort.”[3] The students blatantly ignored the pleas of the faculty to climb down, shouting pro-Union speeches from the roof while firing Mexican-American War era muskets.[4]

In an effort to defy “the Yankee precedent,” Southern students attempted to attend their morning classes in Nassau Hall, but “the virtues of Hebrew and Latin verbs paled” in comparison to the demonstration occurring outside of their classroom window. By afternoon, Southern students had abandoned their studies and initiated a pro-Southern demonstration on the front lawn of Nassau Hall. Throughout the rest of the day the two “enemy camps” exchanged spirited words and continued their patriotic displays. As evening drew near, the opposing groups negotiated a peace treaty and went to the “Inn” together to celebrate.[5]

Following the excitement, the college administration ordered that the flag be removed from Nassau Hall, a decision that deeply angered many Northern students. In response, the students formed a committee to ensure the flag's return to its rightful place.[6] News of their plans reached the Southerners, who sent a representative to the committee “with the request that they might be permitted officially for the last time to salute the flag.”[7] Southern students viewed this as their final farewell to their college, as many of them planned to return home to the South.

John DeWitt, a member of the class of 1861, recalled that John Dawson, a classmate from Mississippi, led the ceremony and accompanied the singing of the “Star Spangled Banner” with his violin. After this rendition of the national anthem, the Southern students gave their final salute to the flag “and then marched off campus” for the last time, with the Northern students “standing uncovered before them at salute.”[8] 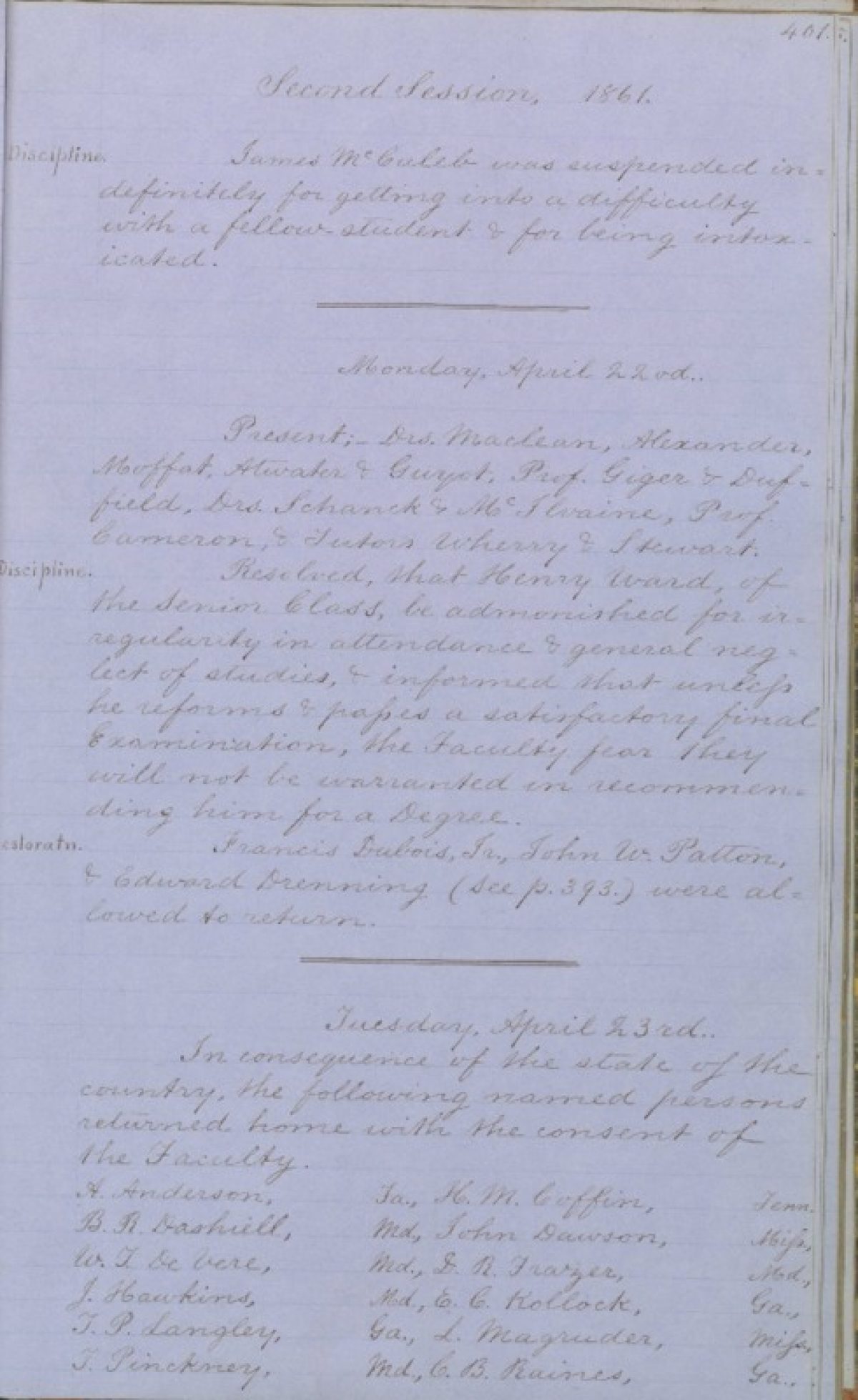 A list of Southern students honorably dismissed from the college due to the outbreak of the Civil War.

On April 23, 1861, the College of New Jersey faculty granted “honorable dismission” to 56 students “in consequence of the state of the country.” Among those who went home were twenty-two seniors, fourteen juniors, fourteen sophomores and six freshmen—all but one of whom hailed from a Southern slave state.[9]

Theodore W. Hunt, a member of the class of 1865, witnessed the intimate moment when members of the class of 1861 said goodbye to one another,  “assembled at the east end of Nassau Hall, bidding one another an affectionate farewell.”[10] For Hunt, the moment evoked particular sadness given that “the Northern and Southern students were enlisting in the service of their respective sections,” and many of them would “give up their lives to the service of their country”—fighting on opposite sides of the Civil War.[11] Ultimately, of the more than 600 Princeton alumni who served in the Civil War, more than half of them would fight for the Confederacy.

The exodus of Southern students altered the political climate on campus. In the absence of their Southern classmates, remaining students formed groups on campus in support of the Union cause. William E. Potter (class of 1861) wrote in his diary on September 3, 1861 that he “joined an association in Princeton, having for its object the prevention of any uprising among the secessionists” in the Princeton area.[12]

A little over a week after that entry, Potter wrote about a Northern student—New Yorker Francis DuBois Jr. (class of 1863)—openly expressing Confederate sympathies and “parading his secession principles.”[13] At midnight on September 13th, Unionist students took matters into their own hands, taking Dubois from his dormitory room and forcing him under the college water pump.  As Potter described the event:

That venerable institution was then put into operation, and continued to pour forth its aqueous contents until the fire of disunion was pretty well quenched from his breast.[14]

The faculty charged three students for the incident: Howard James Reeder (class of 1863); Samuel B. Huey (class of 1863); and Isaac K. Casey (class of 1864).[15] Though the accused students never admitted their guilt to the faculty, they did declare that "they were willing to put forth every effort to crush out the vile heresy of secession from old Nassau"—an indirect confession that led to their suspension from the college.[16]

Following the faculty’s verdict, the remaining students on campus viewed Reeder, Huey, and Casey as “martyrs,” believing that they deserved to be celebrated for their heroic actions rather than punished.[17] To properly send them off, students organized a parade to escort them to the train station. The three "martyrs" rode in a carriage adorned with American flags and an estimated 150 students pulled them through campus on their way to the depot, all the while “cheering for the Union and groaning for secession.”[18]

Once they reached the depot, a patriotic demonstration ensued as flags floated in all directions and several ladies greeted the young men “with waving handkerchiefs and clapping of hands.”[19] Before departing, Reeder, Huey, and Casey delivered rousing speeches—each implying that he would repeat his actions if given another opportunity to do so.[20] Though the three young men were not granted the "honorable dismission" awarded Southerners returning home to join the Confederacy, classmates of the three Unionists ensured that they were sent off in the most honorable fashion that could only have “attached itself to dismission under such circumstances.”[21] 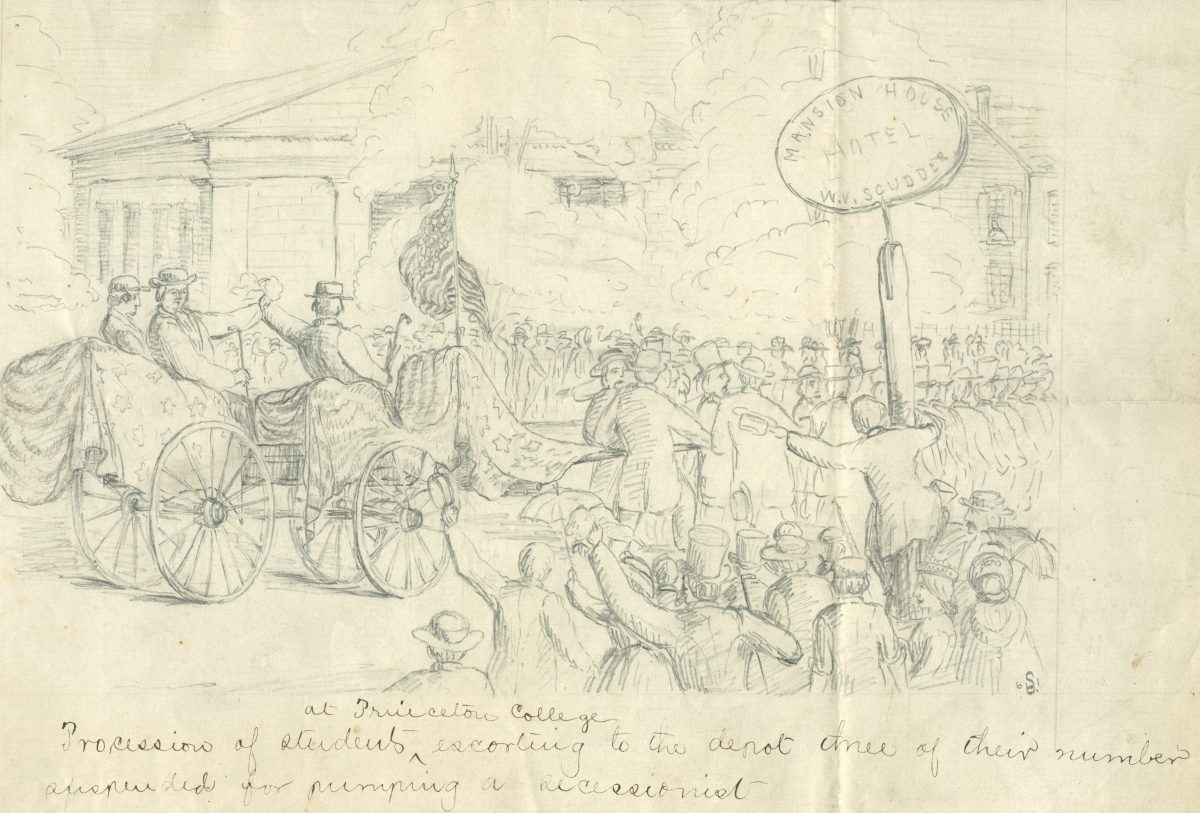 A pencil drawing depicting the parade given for Howard James Reeder, Samuel B. Huey and Isaac K. Casey.

View all stories by Kimberly Klein »

“Mixups at Old Nassau During Civil War Dwarf Confusion of Modern Club-Calling,” The Daily Princetonian, 1 March 1941; The Vigintennial Record of the Class of 1864 of the College of New Jersey (Princeton, NJ: C.S. Robinson & Co., Printers, 1884), 8-9.

“Martyrs of the Pump: A Dramatic Tale of the Civil War in Which a Secessionist Is Given the Water Cure, His Punishers in Turn Disciplined by the Faculty, and the Whole Affair Concluded with a P-Rade,” Princeton Alumni Weekly, 20 October 1933.