The Alumni Subscription Campaign of 1835

In 1835, the Alumni Association of Nassau Hall responded to financial crisis with a fundraising campaign among Princeton alumni. Many of the donors who responded were southerners with ties to slavery.

Every year, thousands of Princeton University’s alumni descend upon their alma mater to take part in “Reunions.” The elaborate affair is designed to keep former students’ hearts and purse strings close to the university. Appealing to alumni for funds has been a long-standing strategy—beginning with the formal creation of the Alumni Association of Nassau Hall in 1826 as a means of harnessing the collective wealth of the College of New Jersey’s former students. In 1835, when the college was plagued with financial difficulties, the Alumni Association mounted a subscription campaign to create an endowment. The campaign represented a concerted effort to permanently augment and secure the college’s financial position. But because such a large proportion of Princeton students had historically come from southern states, soliciting yearly subscriptions from alumni meant drawing money directly from slaveholders and those whose wealth derived at least partly from slave labor.

Shortly after assuming the presidency in 1823, James Carnahan contemplated shuttering the college’s doors in the face of declining enrollment and conflict among students, trustees, and faculty. But with the help of John Maclean Jr. (Carnahan’s vice president and successor as president), Carnahan reorganized the college and put it on a path toward financial success—deepening its financial connections to the slaveholding South in the process.[1]

Maclean Jr. spearheaded the creation of the Alumni Association in 1826, which was formed “to promote the interests of the College and the friendly intercourse of its graduates.”[2] Princeton alumni held influence in their communities and the nation at large, making them powerful potential allies for the college. Indeed, James Madison, class of 1771 and fourth President of the United States, served as the Alumni Association’s first president.

Trustee Samuel L. Southard led the first dedicated effort to solicit funds from alumni. In September 1830, he and the Reverend John McDowell were authorized to raise $20,000 for the endowment of a professorship. While they managed to raise only $10,835, it was an important first step in creating a sense of responsibility among alumni to their alma mater.[3] In his 1832 commencement address, Southard rallied troops to the cause:

[Other institutions] do not call in vain upon their Alumni and friends. Thirty thousand dollars are said to have been already subscribed for a similar purpose in Amherst, and fifty thousand are confidently anticipated in a very short time. For Yale, eighty thousand have been subscribed, and one hundred thousand will probably before long, be at its command. Shall not we, then, be able to raise enough to endow one or two professorships? Do we love our Alma Mater less? Has she less claims upon us, or upon the public? Are we less devoted to the cause of science, and religion, and learning, than others?[4]

Southard’s call to arms was a taste of things to come for the College of New Jersey. 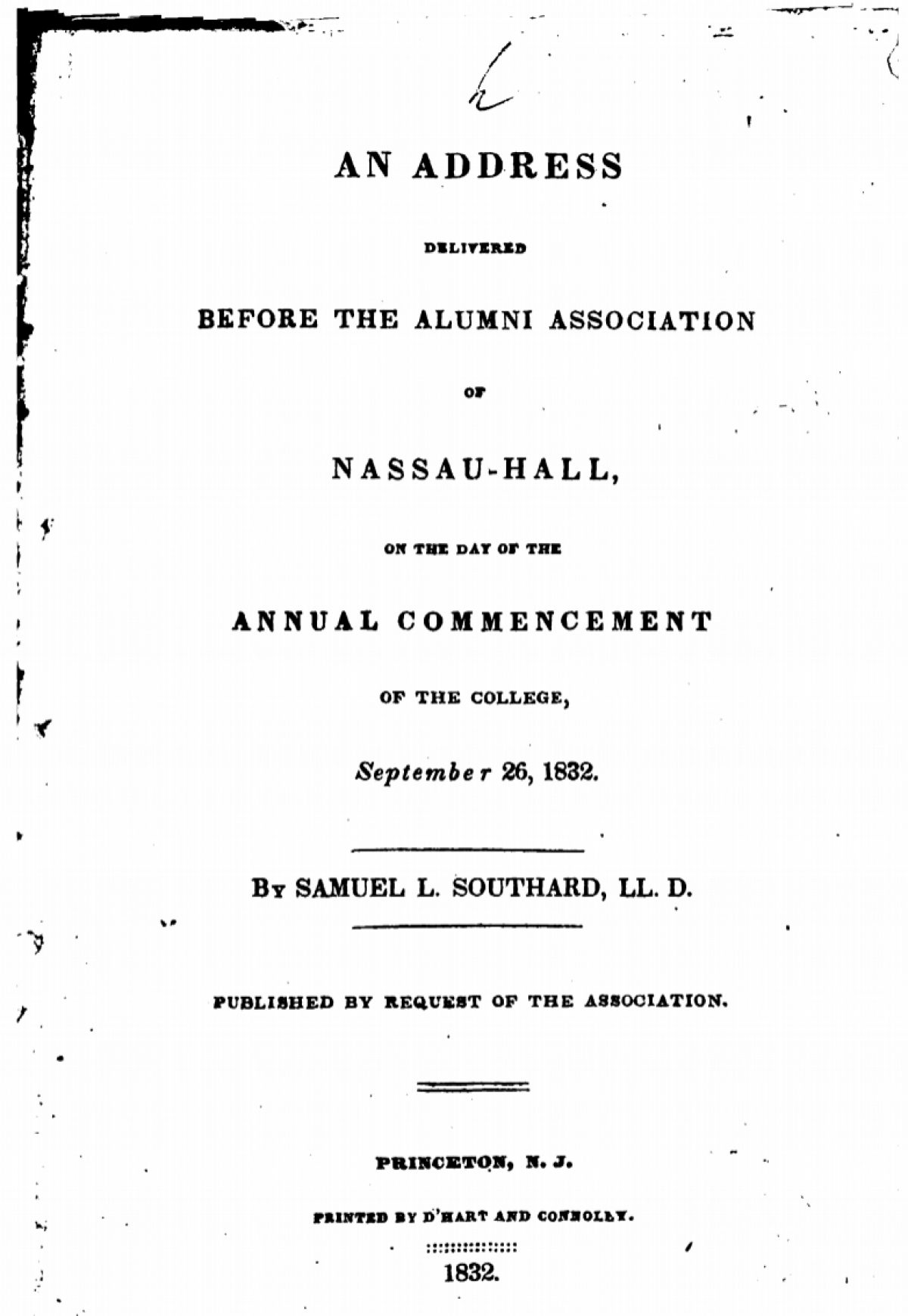 In 1835, the Alumni Association resolved to raise $100,000 “for the extension and improvement of the College,” and appointed a committee to carry out the resolution.[5] “Vigorous efforts are in progress to meet the wants of the College of New Jersey, and to elevate it, in point of endowment, by voluntary subscription, to a level with the first colleges in the nation,” wrote Daniel Newell in a circular letter to the College’s alumni. Newell had been tapped by the Alumni Association to serve as their General Agent to solicit donations for the campaign. The association believed that the college needed a large influx of funds not only to advance into the upper echelons of educational institutions, but simply to survive in a time of financial turmoil. The total funds available to the college barely exceeded $2,000 per year, a sum Newell admitted was “barely sufficient to defray the ordinary and incidental expenses of the College.”[6] Unlike its peer institutions, the College of New Jersey had been unable to secure an endowment to fund its activities, in part because the college received no funding from the state legislature.

The timing of the campaign was inauspicious. The years leading up to the campaign were ones of rampant inflation and land speculation throughout the country. National financial policies such as President Andrew Jackson’s Specie Circular, his veto of the bill to recharter the Second Bank of the United States, and the subsequent relaxing of lending standards among American banks contributed to the Panic of 1837. Jared D. Tyler, who attempted to fundraise for the college in Mississippi, wrote to John Maclean Jr. in 1835:

When I was about to make an effort upon our community in the winter of 1833-34, lo! the Jackson times were upon us and it was not very safe for an agent to approach the pockets of the peoples.[7]

He continued that “it was agreed that on all hands that it would be better to defer operations to a future and more favorable opportunity.”[8] But the campaign pressed onward throughout 1835 despite the prevailing economic conditions, and several thousand dollars were collected. $4,000 went to the endowment, with $500 (including $420 for a “large telescope”) spent on scientific equipment for Chair of Natural History Joseph Henry. Some of this equipment was likely used by Henry’s research assistant, a free black man named Sam Parker.

Who were the alumni of the College of New Jersey? More than any of its peer institutions, Princeton was a national college. From the 1790s until the Civil War, southern states consistently supplied at least 40% of the college’s student body—whereas students attending Harvard, Yale, and William and Mary came overwhelmingly from Massachusetts, Connecticut, and Virginia, respectively.[9] The broad geographical distribution of Princeton students offered unique opportunities, especially when it came to harnessing the economic power of the college’s wealthy slaveholding alumni. Unsurprisingly, the subscription booklet from the 1835 campaign lists donations from alumni in Baltimore, Maryland; Washington D.C.; Savannah and Augusta, Georgia; Charleston, South Carolina; and Natchez, Mississippi.

The 1835 subscription campaign drew upon alumni from the South’s wealthy elites.[10] James Madison, who owned more than one hundred slaves, left $1,000 to the college.[11] Other donors included South Carolina senator Daniel Elliot Huger, South Carolina Federalist Party leader Henry William de Saussure, Georgia lawyer Matthew Hall McAllister, Georgia senator and United States Attorney General John Macpherson Berrien, Georgia congressman George W. Crawford, and Georgia congressman and United States Supreme Court justice James Moore Wayne. Huger was a planter who owned approximately two hundred enslaved people during his life, and Berrien owned over one hundred by the time of his death in 1856. James Moore Wayne, who subscribed $100 to the college, famously sided with the majority decision in the 1857 Dred Scott v Sandford case, which ruled that African Americans could not be American citizens. He was also a slave owner, and the father of three children by an enslaved woman.[12] And Mississippian Jared Tyler contributed a $1,000 subscription—wealth derived from his lucrative saw-mill in Natchez, where six slaves named Bill, Dennis, Henry, John, Stephen, and Tom labored.[13]

With respect to slavery, the college had to navigate conflicting positions in its fundraising efforts. In October 1835, New York banker David Leavitt offered a $1,000 subscription, on one condition:

That students be admitted, irrespective of color, that all be entitled to the like privileges and that official notice be published in the New York Evangelist and Observer.[14]

The College of New Jersey declined the offer. 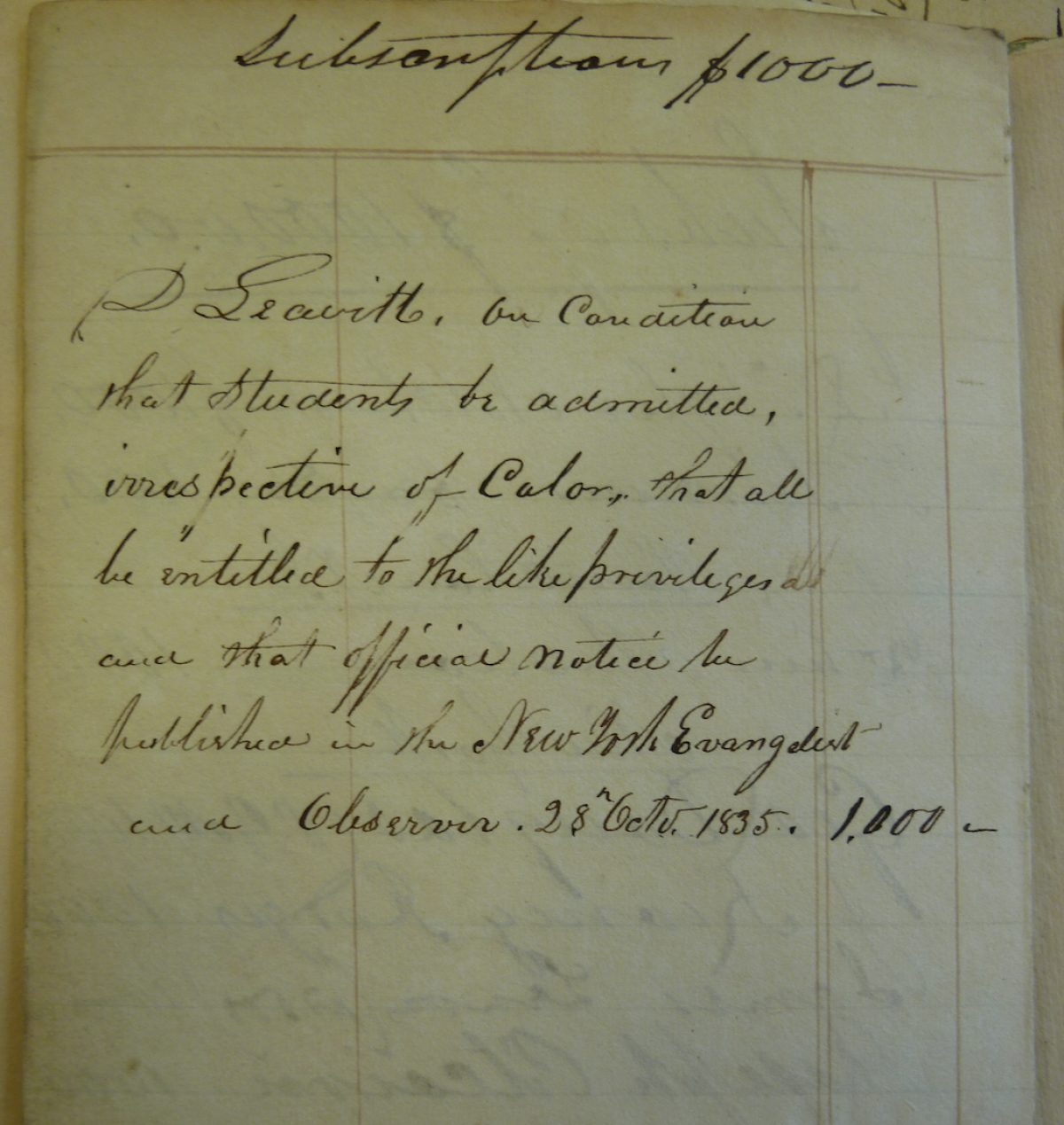 1835 note describing New Yorker David Leavitt's offer to donate $1,000 to the college if Princeton would admit students "irrespective of color."

Or consider another alumnus (and former acting president of the College of New Jersey), Philip Lindsley, who responded to an appeal from the Alumni Association and donated $500. Lindsley’s antislavery rhetoric turned increasingly ambivalent after he left Princeton to serve as president of the University of Nashville. By the time of his death in 1855, two of his sons were slaveholders and Lindsley himself held that slavery had positive effects upon the black population in the United States.

The college’s fateful decision to turn to alumni for support in 1835 marked a turning point in the institution’s history, after which former students became a cornerstone of Princeton’s financial planning and success. Though the subscription campaign was most heavily concentrated in New York, Philadelphia, and New Jersey, slaveholding regions were also well represented, and nearly one quarter of the donors resided in the South. As one historian has speculated, without the fundraising efforts of the 1830s—which solicited donations from slaveholders—Princeton might not have survived the shock of the Civil War, which ended in the emancipation of enslaved people throughout the United States.[15]

Rob Konkel is a Ph.D. candidate in the History Department at Princeton. He is interested in twentieth-century global history, and his current research examines interwar efforts to create and manage a global economy. Previously, he has written a historical account of the concept of poverty at the World Bank. Rob completed his undergraduate studies at the University of Saskatchewan and received a master's degree from Oxford University.

View all stories by Rob Konkel »

Samuel L. Southard, An Address delivered before the Alumni Association of Nassau-Hall on the day of the Annual Commencement of the College, 26 September 1832 (Princeton, NJ: D’Hart and Connolly, 1832), 22.