Slavery in the Witherspoon Family

As Princeton president John Witherspoon’s children married and left New Jersey, their relationships to slavery were shaped by the political climate and economy of their new homes throughout the North and South.

John Knox Witherspoon (1723-1794) served as Princeton’s sixth president from 1768 to 1794. He personally owned slaves and publicly lectured and voted against the abolition of slavery in New Jersey, yet he also tutored several African and African American students. His actions and writings illustrate his sometimes contradictory positions on slavery. Likewise, his children and their families wrestled with the complexities and moral dilemmas of slavery.

Ann Witherspoon (1749-1817), John Witherspoon’s eldest daughter, was nineteen years old when her family moved from Scotland to New Jersey. As such, she outranked many of her father’s pupils in age and maturity. One such student was her future husband, Samuel Stanhope Smith (1751-1819). Smith would join the Witherspoon family in 1775, when he married twenty-two-year-old Ann Witherspoon.[1] Smith was among the first students to graduate from the College of New Jersey under John Witherspoon’s instruction, and would ultimately succeed his mentor as president of the college in 1795.

Like his father-in-law, Smith owned slaves while living in Princeton. Appointed Professor of Moral Philosophy in 1779, he and his wife moved into the President’s House on campus after John Witherspoon relocated to his nearby country home, Tusculum. In 1784, while still living at the President’s House, Smith placed a notice in the local New Jersey Gazette advertising the sale of “a negro servant, about 25 years of age, who is well acquainted with the benefits of a plantation, and used to taking care of horses.”[2] Smith’s advertisement also stated that he would be willing to exchange his “negro servant” for “a servant accustomed to cooking and waiting in a genteel family.” He sought to purchase an enslaved person who would lighten the domestic load for his wife and their growing family.[3] 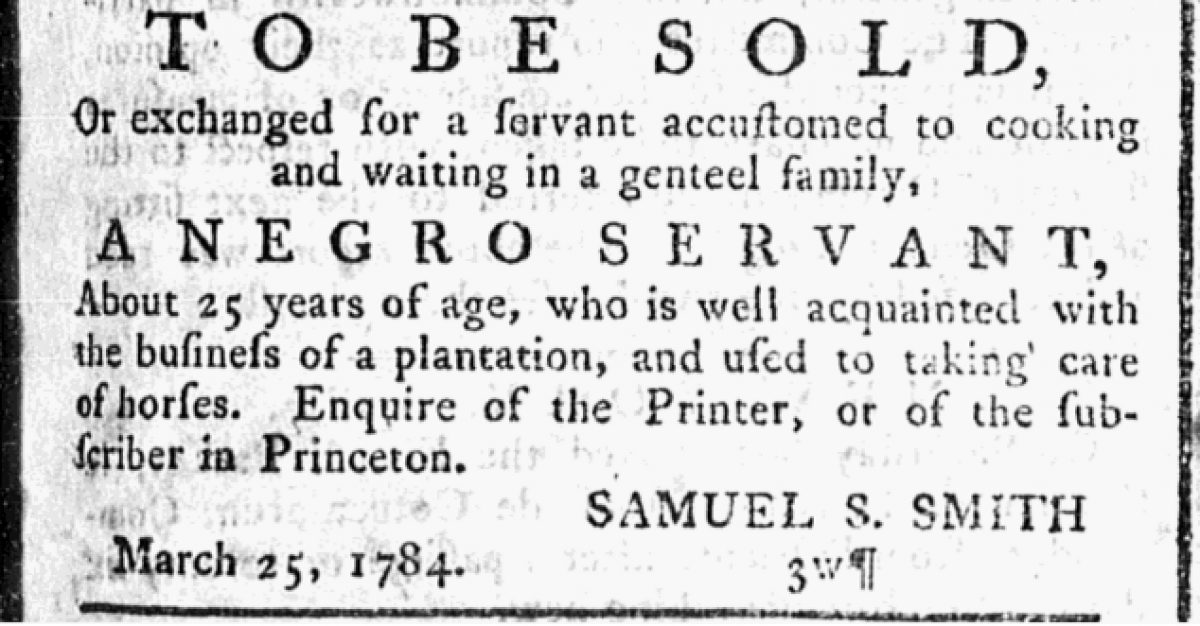 An ad to sell a slave placed by Samuel Stanhope Smith in 1784.

Despite the fact that he himself owned slaves, Samuel Stanhope Smith also held forward-thinking views on the nature of race. In 1787, Smith delivered his Essay on the Causes of Variety of Complexion and Figure in the Human Species to the American Philosophical Society. In the published version, Smith argued that race was in fact a product of a person’s environment rather than innate biological differences.[4] Smith’s challenge to Enlightenment-era ‘scientific racism,’ however, had not persuaded him to manumit his own “Negro servant.” 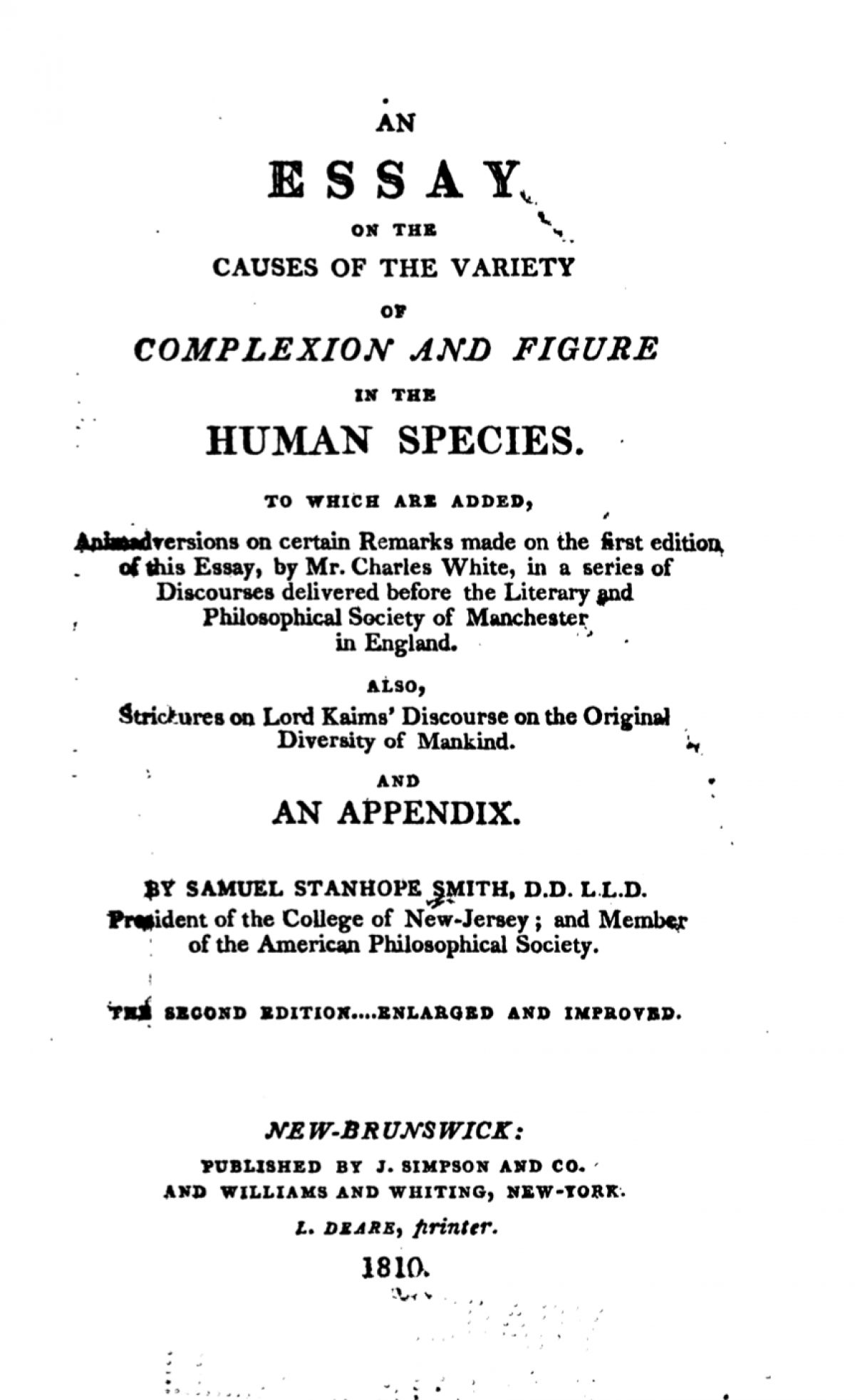 Samuel Stanhope Smith's "Essay on the Cause of the Variety of Complexion and Figure in the Human Species," originally published in 1787.

Samuel Stanhope Smith helped plant the seeds of the College of New Jersey’s distinctly southern flavor, successfully recruiting a large part of the student body from southern states during his presidency.[5] Smith had previously served as a minister in Virginia, as well as the first president of Virginia’s Hampden-Sydney College. The fact that Smith himself had lived and worked in Virginia as an educator and minister may have reassured southern parents considering sending their sons to Princeton. Ultimately, Smith strove to make the College of New Jersey more welcoming to southern planter aristocrats looking to educate their sons without fear of exposing them to antislavery thought.

Frances Witherspoon (1759-1784), John Witherspoon’s second eldest daughter, married College of New Jersey alumnus David Ramsay in 1783.[6] Despite developing strong antislavery beliefs while living in New Jersey and Pennsylvania, by the end of his life Ramsay owned both land and slaves in South Carolina.[7] Ultimately, David Ramsay’s life suggests how quickly moral arguments against slavery broke down in the face of the profitability of United States’ rapidly expanding slave economy.

David Ramsay (1749-1815) graduated from the College of New Jersey in 1765, shortly before John Witherspoon began his term as president. He continued his education at the College of Philadelphia (today the University of Pennsylvania) medical school, where he studied under Benjamin Rush (class of 1760). For four years, Rush mentored Ramsay and shared his views against slavery.[8] When Rush turned down a job offer in Charleston, South Carolina, because of his aversion to the city's deep ties to slavery, he recommended David Ramsay in his stead.[9] Although Ramsay accepted the position and moved to Charleston to work as a physician in 1774, he continued to express his opposition to slavery and the slave trade in a series of private letters.[10]

Ramsay carried his antislavery opinions with him to the floor of the Continental Congress in 1782, where he served as a representative for South Carolina. In this capacity, David Ramsay came to know John Witherspoon (then a representative for New Jersey) and his daughter Frances. David Ramsay’s vocal opposition to slavery clashed with the more ambivalent views of his fellow representatives, including Witherspoon. However, if Witherspoon’s slaveholding bothered David Ramsay, he did not let it get in the way of his relationship with Frances. The two were married in 1783.

David Ramsay’s relationship with John Knox Witherspoon ended in 1784, when Frances Witherspoon died from complications related to the birth of the couple’s only son, John Witherspoon Ramsay.[11] Five years later, Ramsay had remarried and acquired a dozen enslaved people to labor on his property in Charleston, along with 7,000 acres of Georgia land and an estimated $10,000 in cash.[12] In 1806 he sold the slaves in his household (along with the house itself) to pay off his debts.[13] David Ramsay declined to manumit the one enslaved person he still owned before he was murdered in 1815.[14]

Like his brother-in-law David Ramsay, John Witherspoon’s son David Witherspoon (1760-1801) moved to a southern slaveholding state early in his adult life. After graduating from the College of New Jersey in 1774, serving as a lieutenant in the Revolutionary War and a private secretary in Congress, and passing the bar in 1783, David Witherspoon relocated to his final place of residence: New Bern, North Carolina.[15] Here, he married wealthy widow Mary Jones Nash (1754-1799) in 1788.

As a result of his marriage, Witherspoon almost instantly became one of the wealthiest men in New Bern, owning one hundred and thirteen slaves—more than any other slaveholder in the county.[16] Through his marriage to Mary, Witherspoon also acquired the large and productive Pembroke Plantation.[17] His property in land and slaves served as a mark of membership in an elite slaveholding class.

Mary Jones Nash wife died in 1799, followed by David Witherspoon in 1801. His will divided his estate between his sons, John Knox and Frederick.[18] Like his father, David Witherspoon did not manumit any of his slaves when he died. He further exercised his mastery by providing specific instructions in his will for the occupations of individual slaves and how his sons were to use the income their labor generated:

I will and desire that my carpenters Jack, his brother Dan, and nephew Heath be hired out monthly and their wages be appropriated to the use of my son... As soon as the children's division of land takes place and my son's negroes can be willed on his behalf so as to produce him a sufficient income for his maintenance at Princeton.[19]

David Witherspoon grew up watching his father tutor free black students in Princeton while holding others in bondage. David Witherspoon, in turn, ensured the continued enslavement of his own human property to secure a Princeton education for his own son.

John Knox Witherspoon’s youngest child, Mary Ann (1794-1846), abstained from slaveholding her entire life. Although she grew up at Tusculum, Mary Ann had no relationship with her father, as he died the year she was born.[20] The most powerful legacy she inherited from John Witherspoon was her Presbyterian faith. This led Mary Ann to marry Reverend James Sterrett Woods in 1818. Shortly after, the couple moved to Woods’s home in Lewiston, Pennsylvania.[21] At the time, due to gradual emancipation laws passed after the Revolutionary War, free blacks comprised ninety-seven percent of the state’s African American population.[22] Slaveholders were a minority in the Woods’ new home state. The couple followed the status quo and never acquired property in slaves.

Mary Ann’s son John Witherspoon enrolled at the College of New Jersey in 1834. The next year, he observed an anti-abolitionist riot on campus. Woods described the event in detail in a letter to his mother:

About a week ago it got buzed through College that there was an Abolitionist in town, & one night the students about 60 number went down to a negro man’s house, where they heard this Abolitionist was holding a meeting… they laid hold on him & draged him out of the house; they at first intended to tar & feather him, but he begged so pitifully that they determined not to injure him, they took his subscription paper from him & burned it & then took him up in front of the Seminary & called to the Seminarians that here was one Abolitionist & they might look out to be served in the same manner if they caught any of them… [23]

It remains unknown whether Woods participated in the riot or merely watched as a bystander. His note that the abolitionist “begged so pitifully” indicates sympathy for the man. However, Woods stopped short of expressing any judgment on his classmates’ actions. 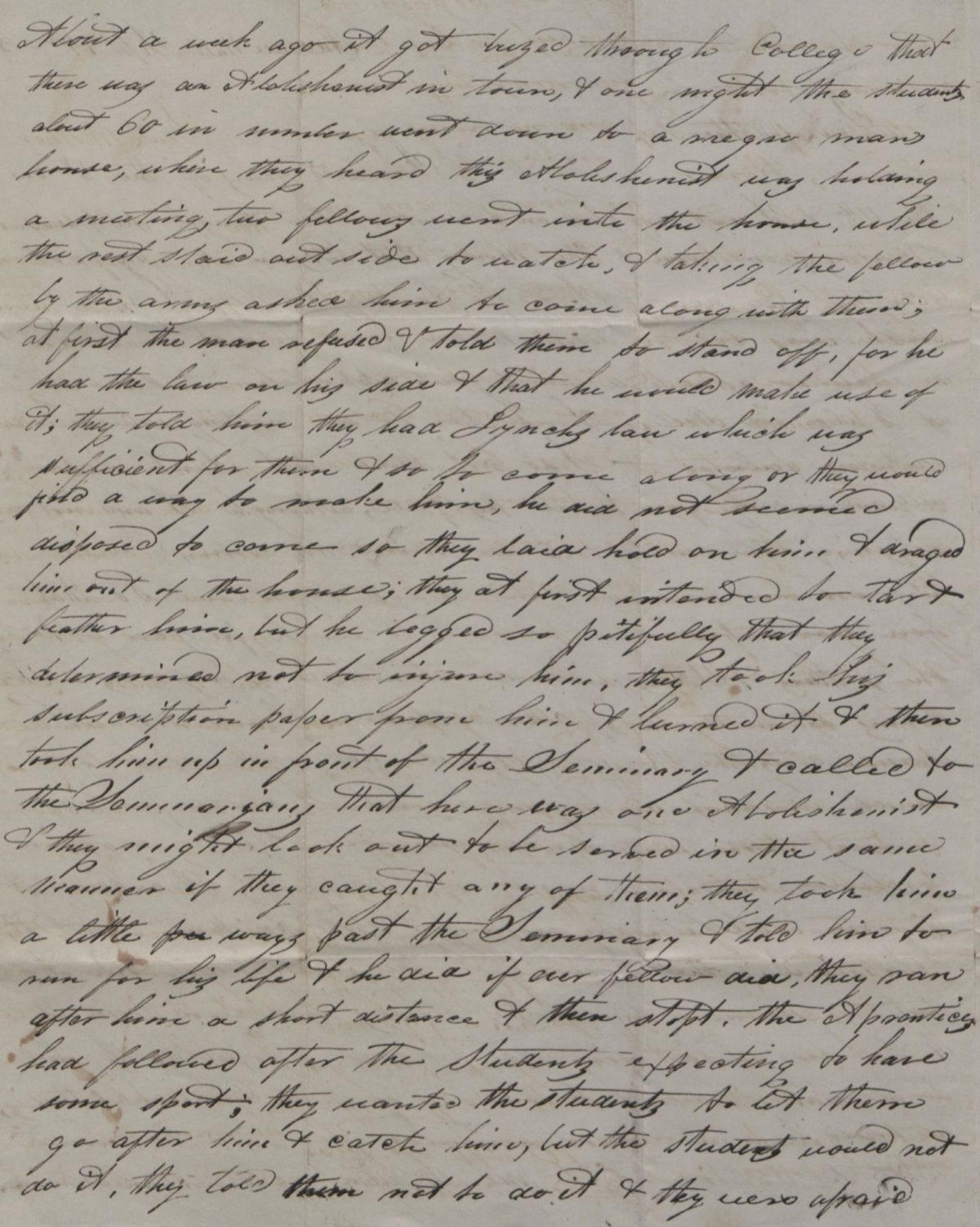 Ultimately, John Witherspoon Woods’s letter reflects multiple aspects of his grandfather John Witherspoon’s legacy surrounding slavery. Unlike Witherspoon’s other descendants, Woods did not benefit from a generational transmission of enslaved property. Like his mother and uncles, his views on slavery were strongly influenced by the environment in which he lived. When he attended Princeton in the mid 1830s, he found a college culture shaped by his grandfather’s and uncle’s accommodationist views.

Lesa Redmond graduated from Princeton University in 2017 with a degree in History and a certificate in African American studies. Her independent research focused on Princeton University's connection to slavery. For her senior thesis, she explored Princeton's sixth President, John Knox Witherspoon, and his ties to slavery.

View all stories by Lesa Redmond »

Joseph Bailey Witherspoon, The History and Genealogy of the Witherspoon Family (1400-1972) (Forth Worth, TX: Mirian Publishers, 1973), 104. There were other similarities between Smith and Ann Witherspoon. Smith’s father, like hers, was a Presbyterian minister. Robert Smith (1723–1793) accepted a preaching position at Pequea’s Presbyterian church in 1751. Robert Smith also served on the College of New Jersey’s board and sent his three sons to Princeton. See: Alexander Leitch, “Smith, Samuel Stanhope,” A Princeton Companion (1978), accessed 14 August 2017, https://etcweb.princeton.edu/CampusWWW/Companion/smith_stanhope.html.

By this time, the Smiths had three children. Witherspoon, The History and Genealogy, 104.

Witherspoon, The History and Genealogy, 104.

Witherspoon, The History and Genealogy, 108.

Witherspoon, The History and Genealogy, 56.