Samuel Hopkins and the Paradoxical Legacy of Jonathan Edwards Sr.

Jonathan Edwards Sr., the third president of Princeton (then called the College of New Jersey), owned a number of slaves throughout his adult life. Although he opposed the Atlantic slave trade, he vocally defended slavery as an institution, and died in Princeton without manumitting any of his slaves.

Yet the legacy of this Princeton president is more complex than it may appear. A number of Edwards’s students who studied his theology became firebrand abolitionists. Edwards’s closest followers, including the minister Samuel Hopkins and Edwards’s own son Jonathan Edwards Jr., publicly denounced slavery. Moreover, Edwards’s antislavery followers claimed they were simply explaining their mentor’s theology more fully, and that their views were in fact consistent with his teachings.

Edwards’s legacy merits a closer look. One of the most influential theologians of the 18th century, Edwards was at once a slaveholder, a defender of slavery, and a forerunner of abolitionist thought in the New England theological tradition. 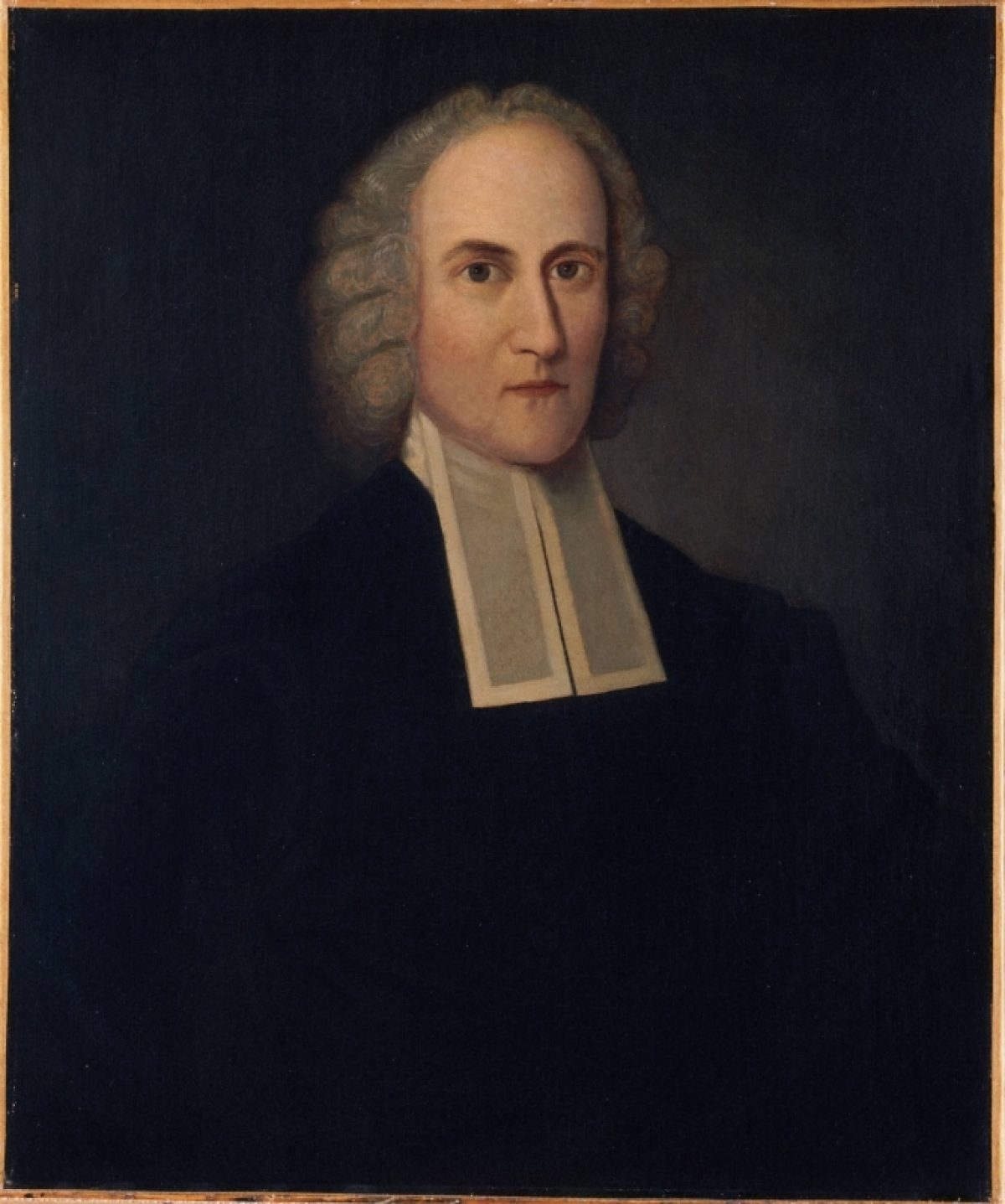 Jonathan Edwards’s closest friend and theological disciple was Samuel Hopkins (1721-1803). As a young man preparing for the ministry, Hopkins had made plans to live with and study under the itinerant preacher Gilbert Tennent, a slaveholder and Princeton trustee. But after hearing Jonathan Edwards preach, Hopkins changed his plans: he knew he had to “go live with Mr. Edwards, as soon as I should have the opportunity.”[1] In Northampton, Massachusetts, Hopkins studied “divinity” and built a firm relationship with Edwards. More importantly, Hopkins was introduced to the theological grounding he would later use to lead a wave of ministers in antislavery activism.

Although Jonathan Edwards vigorously denounced the cruelty of the Atlantic slave trade, he defended the institution of slavery itself. Edwards viewed slavery through the lens of Puritanism, which saw various stations in life as divinely appointed. Slavery was merely an institution that existed in the world and was the “practice that prevails” for the American colonies.[2]

To Edwards, owning slaves was not a sin. Enslaving people through the Atlantic slave trade, however, was sinful. For white Europeans to justify “disfranchising whole African nations” on faulty biblical interpretations, Edwards wrote, was a “monstrous supposition.”[3] The bible described all people as neighbors, and to rob them of their liberty by forcing them into bondage was unbiblical.

Samuel Hopkins applied Edwards’s views on the slave trade to the institution of slavery as a whole. In practice, Hopkins wished to end the transatlantic slave trade and see all Africans and Native Americans manumitted across the Americas, including the British colonies that would eventually become the new American republic. Hopkins and the rest of Edwards’s disciples—called the “New Divinity”—preached that they were simply taking the next steps in “consistent Calvinism,” with Edwardsean theology as its foundation. Hopkins and other Edwards followers freed their slaves and saw it their Christian duty to convince other slaveholders to liberate those in bondage. 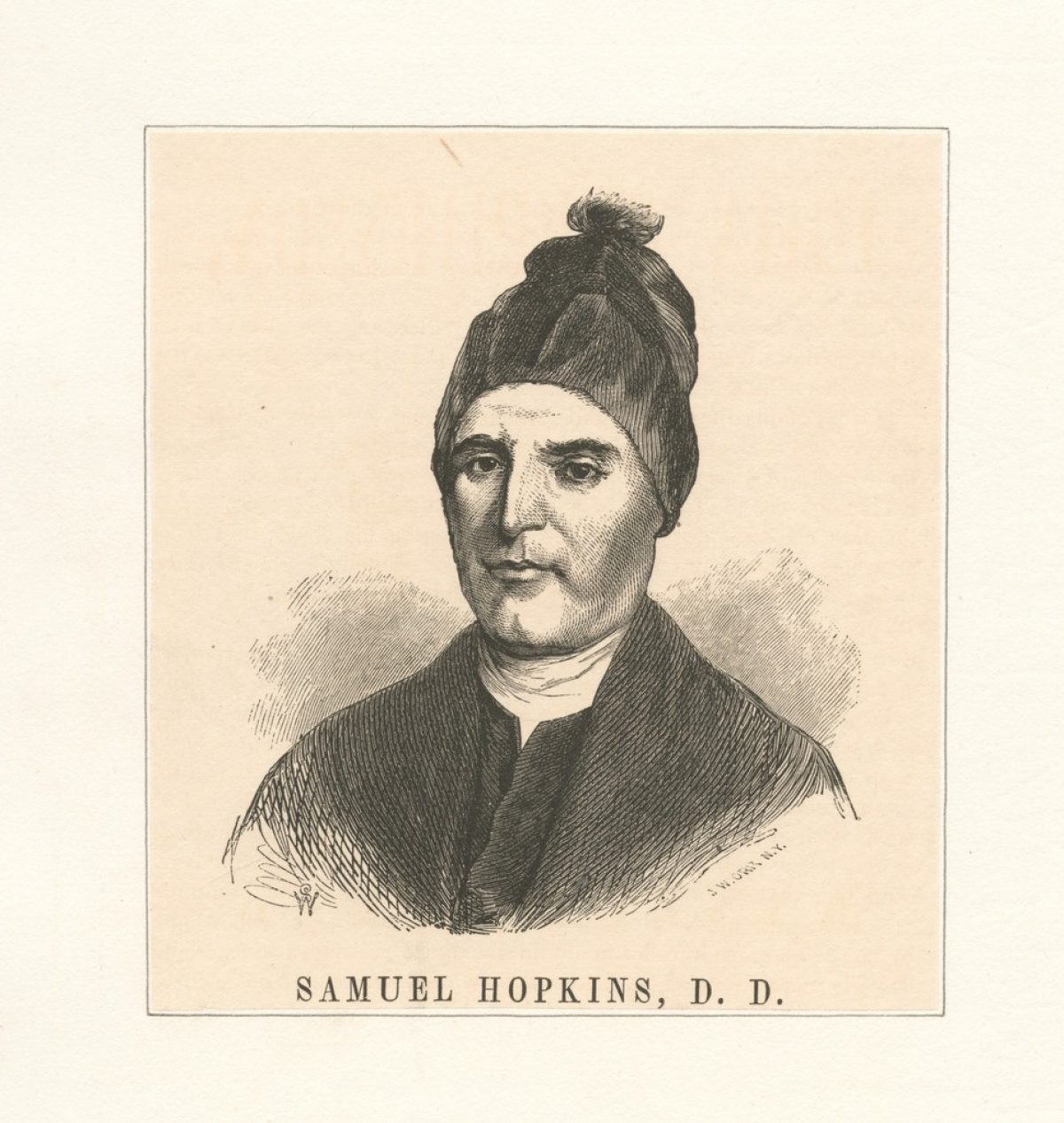 Engraving of theologian and abolitionist Samuel Hopkins, a student of Jonathan Edwards Sr.

Like his mentor, Hopkins was disgusted by white Europeans who forcibly removed people from their homeland to sell them into the slave trade. At the time, the practice was typically referred to as “man-stealing.” On the eve of the American Revolution, Hopkins addressed the members of the Continental Congress to denounce of man-stealing, arguing that Africans were put “into a state of slavery by unrighteousness and violence, they having never forfeited their liberty or given any one a right to enslave and sell them.”

“Holding them in the same state of bondage into which they, contrary to all right, have brought them,” Hopkins stated, “is continuing the exercise of the same unrighteousness and violence towards them.”[4] By stealing people away from their native lands and imposing a life of cruel submission, slave traders also stole their personal liberty.

Hopkins also decried the inhumane treatment that enslaved people suffered both on the voyage to the colonies and once they arrived. Hopkins had come to pastor a church in Newport, Rhode Island, one of the slave-trading epicenters of the North American colonies, and the same location where Jonathan Edwards had purchased slaves. There, Hopkins witnessed the brutality that enslaved people faced on their forced journey from the West African coast.

Hopkins recorded that Newport had become a large commercial center for “negro trafficking.” Of the 202 slave ships that entered the port of Charleston, South Carolina between 1804 and 1808, 59 came from Rhode Island.[5] As Hopkins wrote, Newport itself had “been built upon, and flourished in times past, at the expense of the blood, the liberty, and happiness of the poor Africans; and the inhabitants have lived on this, and by it have gotten most of their wealth and riches.”[6] And in no exaggeration, Hopkins declared that “volumes might be written, and not give a detail of a thousandth part of the shockingly cruel things they have suffered, and are constantly suffering.”[7] Any person with a conscience “who are witnesses to any part of this horrid scene of barbarous oppression,” he believed, could easily “feel the truth” that the practice of chattel slavery was inhumane.[8]

Like Edwards, Hopkins was appalled by the cruelty of the slave trade. But going where Edwards would not, Hopkins applied his arguments against the slave trade to the institution of slavery as a whole. As Hopkins proclaimed:

It is, therefore, become a national sin, and a sin of the first magnitude—a sin which righteous Heaven has never suffered to pass unpunished in this world.[9] 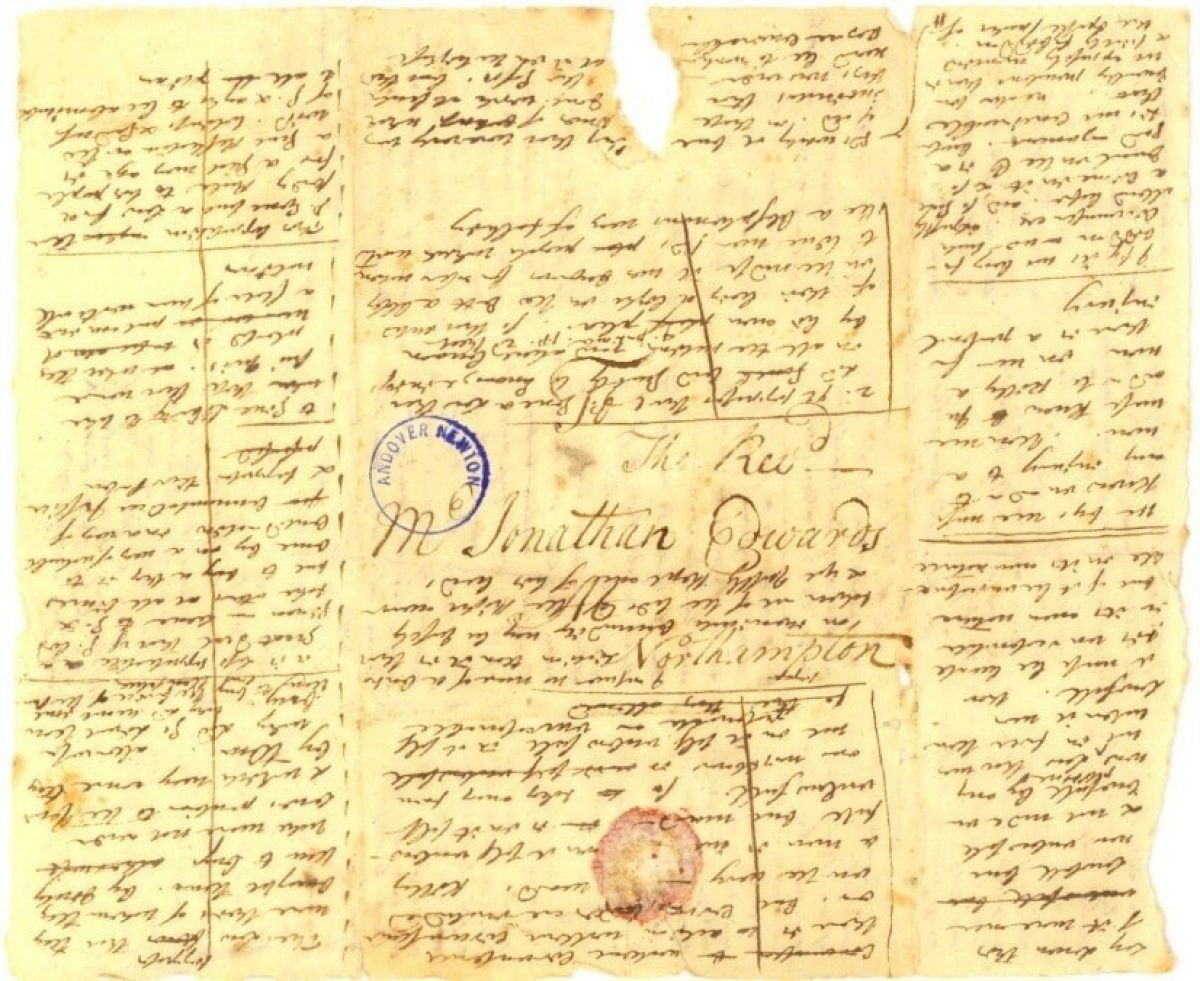 1741 draft letter by Jonathan Edwards Sr., in which he defends the practice of owning slaves.

Hopkins and the Revolution

Although Jonathan Edwards died in 1758, decades before the American Revolution, his theology influenced revolutionary thinkers and their views on slavery. Like Edwards, Hopkins and the New Divinity saw politics and religion as coexisting in one cognitive realm. This is evident in their application of Edwards’s theology to social ethics. But how did it impact their views of the Revolution? Hopkins and the New Divinity used revolutionary rhetoric as ammunition for their antislavery arguments. Hopkins, for example, compared the oppression of Africans in unrighteous bondage to the oppression of the American colonies by Great Britain. In his view, the fight for liberty applied to all people, regardless of race.

As the thirteen colonies geared up for rebellion, the New Divinity saw their opportunity to interject arguments against chattel slavery into revolutionary discourse. For white American colonists to wage war against their supposed oppressor and at the same time oppress Africans, Hopkins said, was a “wicked contradiction.”[10] Tying the American cause of liberty to the plight of enslaved people, he argued:

Is it possible that the Americans should, after all this, and in the face of this light and conviction, and after they had obtained liberty and independence for themselves, continue to hold hundreds of thousands of their fellow-men in the most abject slavery?[11]

Hopkins hoped that an American victory would lead to the widespread emancipation of enslaved people. Disappointed when slavery continued after the war, he continued to openly criticize slavery and the hypocrisy of Americans who praised the Declaration of Independence while at the same time owning slaves.

“The language and sentiment of all these states,” Hopkins reminded them, is “that we hold these truths to be self-evident, that all men are created equal; that they are endowed with certain unalienable rights.” All people, he said, “are born equally free and independent. The Africans, and the blacks in servitude among us, were really as much included in these assertions as ourselves.”[12]

How did the teachings of a slave-owner like Jonathan Edwards inspire such antislavery zeal in his students? If Hopkins and the New Divinity thought they were acting consistently with their mentor’s theology, how did they arrive at different conclusions about slavery?

Hopkins’s antislavery views—such as his denunciation of man-stealing and belief in Revolutionary ideals of liberty and equality—were outgrowths of a foundational doctrine that Edwards called benevolence. Edwards conceptualized benevolence as love. In his work Charity and Its Fruits, he described love as the “Sum of All Virtue.” For example, Edwards analyzed the biblical passage in 1 Corinthians 13:1-3 (KJV):

Edwards argued that the original Greek word (ἀγάπη), which is here translated ‘charity,’ might better have been rendered ‘love.’[13] Edwards argued that charity meant showing one’s love for God, writing: “what is called charity in the first verse, is called loving God in the third, for the very same thing is evidently spoken of in the two places [in the passage].”[14] In his work True Virtue, Edwards wrote that “virtue most essentially consist in love” and that “the general nature of true virtue is love.”[15]

For Edwards, love of God was the source of true virtue, and true virtue was the essence of benevolence.

Hopkins fully supported Edwards’s doctrine of benevolence. Hopkins expanded Edwards’s theology, however, by explaining that true love, or true virtue, was manifested in one’s “love to God and our neighbor.”[16] For Hopkins, love of one’s neighbor had to be disinterested. Disinterested love would seek the welfare of other people, not just oneself:

Love to our neighbor, which God’s law requires, is certainly universal, disinterested good will, since it is a love which will dispose us to do good unto all.[17]

One way to display a sense of disinterested benevolence was to defend the liberty and life of enslaved people. Promoting emancipation on the basis of Christian principle, Hopkins preached:

The following precept of our Lord and Savior, ‘All things whatsoever ye would that men should do unto you, do ye even so to them,’ which is included in loving our neighbor as ourselves, will set at liberty every slave.[18]

Hopkins built upon Edwards’s doctrine of disinterested benevolence by expanding its definition to include all people. This inclusive, rather than exclusive, definition incorporated enslaved Africans and African Americans. Glorifying God, Hopkins believed, required fighting for the oppressed. 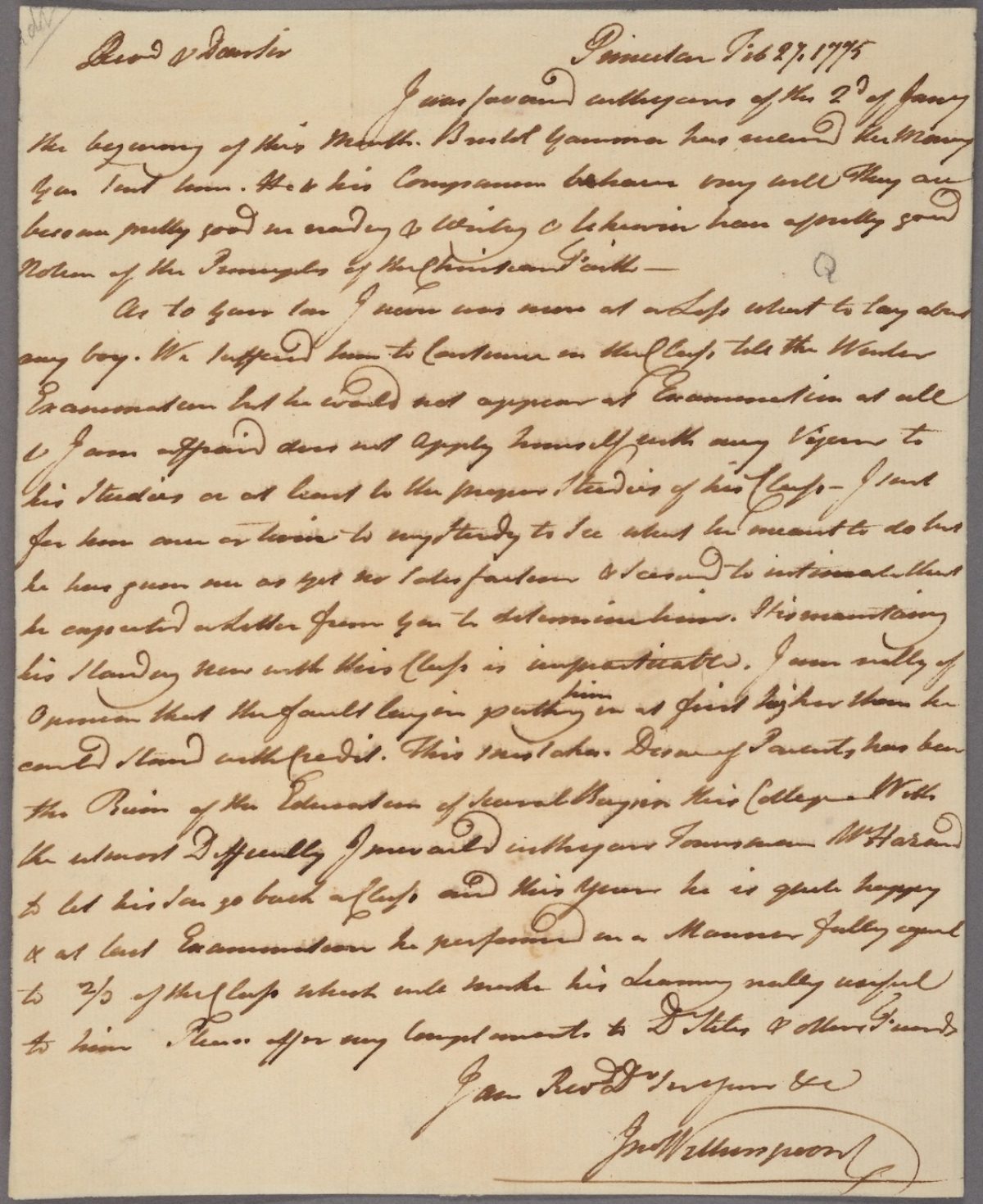 Harnessing Edwardsean doctrines of love and virtue, Hopkins promoted abolitionism at a time when ideas of liberty and slavery were at the forefront of political discussion. As a patriot, Hopkins was generally satisfied with result of the Revolutionary War, but considered the young United States, which boasted of its principles of liberty and equality, to be tainted with the “great and public sin” of slavery.[19] Ironically and paradoxically, it was Jonathan Edwards Sr.—a slave-owner and defender of slavery—who inspired the antislavery theology Samuel Hopkins and the New Divinity used in their attacks on slavery.

Samuel Hopkins, “A Dialogue concerning the Slavery of the Africans, showing it to be the Duty and Interest of the American Colonies to Emancipate all the African Slaves. With an Address to the Owners of such Slaves. Dedicated to the Honorable Continental Congress,” in The Works of Samuel Hopkins, Vol. 2 (Boston: 1852), ed. Edwards Amasa Park, 560. Henceforth referred to as WSH.

Hopkins, Slave Trade and the Slavery of the Africans, WSH 2:617.

Edwards, Charity and its Fruits, WJE 8:129. Edwards had composed fifteen different sermons in 1738 that make up Charity. See also Michael McClymond and Gerald McDermott, The Theology of Jonathan Edwards (New York: Oxford University Press, 2012), 533. McClymond and McDermott state that Edwards lived in an “world dominated by “benevolism”—the idea that human beings are naturally benevolent because of their altruism or “moral sense.” Edwards, in opposition to this view, suggested that true virtue is divine and not natural to humans.

Hopkins, Slave Trade and the Slavery of the Africans WSH 2:601.