Henry Kollock (1778-1819) was a Princeton professor, pastor, and slave owner. He appeared in the first fugitive slave narrative: Life of William Grimes, a Runaway Slave.

Henry Kollock (1778-1819) was a Princeton professor, pastor and slave owner mentioned in the first fugitive slave narrative: Life of William Grimes, a Runaway Slave. In his groundbreaking autobiography, first published in 1825, William Grimes (1784-1865) described the religious counsel he received from Reverend Kollock, the cousin of one of his masters in Savannah, Georgia, before Grimes eventually escaped to freedom in New York. At the time Grimes knew him, Kollock owned at least two slaves and hosted regular prayer meetings attended by Grimes and other enslaved men and women. Grimes’s encounters with Kollock illustrate the contradictions lived by Kollock and men like him—both clergymen and slaveholders. 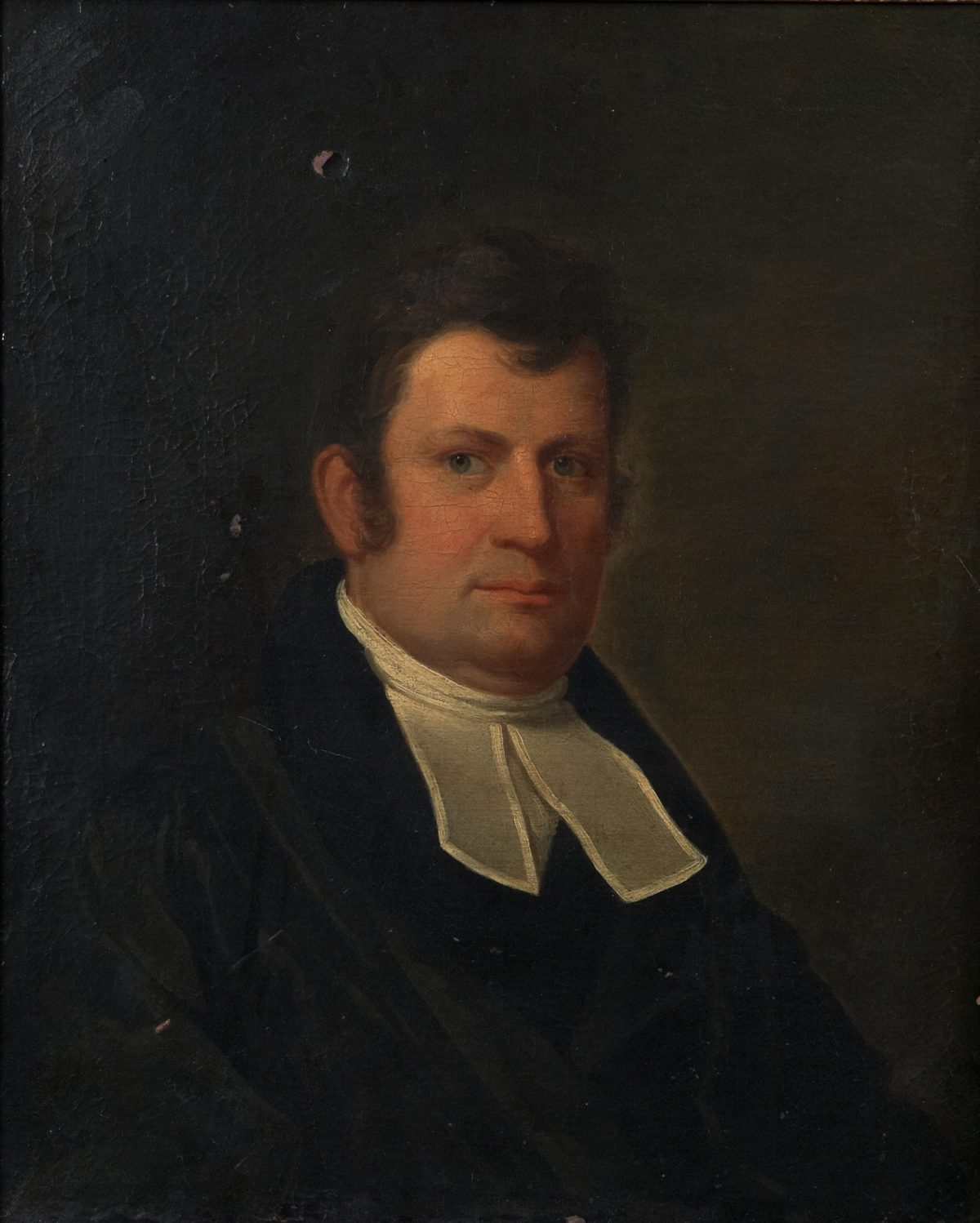 Henry Kollock was born in New Jersey and graduated from the College of New Jersey in 1794. He was a tutor for several years and, after his ordination as a Presbyterian minister in 1800, a frequent preacher in Elizabethtown, Princeton, and throughout New Jersey and surrounding states.[1] In 1803, Kollock became a Professor of Divinity and pastor of the Presbyterian Church in Princeton. During this time, Harvard University and Union College awarded him Doctor of Divinity degrees.[2] In 1804, Kollock married Mehetabel Hylton Campbell of Richmond, Virginia. Two years later, they moved to Savannah, Georgia, where he was invited to serve as pastor of the prominent and affluent Independent Presbyterian Church.[3]

Kollock encountered William Grimes during his tenure at the Independent Presbyterian Church. As Grimes wrote, “under the advice of the Rev. Mr. Collock, whose voice and preaching harrowed up my soul with awful apprehensions, I sought and obtained the hope of salvation.”[4] Grimes described evening prayer meetings hosted by Kollock that he and other slaves attended; he called Kollock “a very fine candid and humane man…  friend to the poor slave, as well as the richest planter, or gentleman.”[5] On one occasion, Grimes visited Kollock at his office:

My master drew one of my teeth, which fractured my jaw […] I kept drinking spirits (in order to ease my jaw where the tooth was drawn,) till I got completely intoxicated, and did not return until nearly evening. I was then a praying soul. As I was returning back to my master's house, I called in at the Rev. Henry Collock's study, or office. He seeing my condition, or the condition I then was in, immediately offered to attend prayers with me, which he did; we prayed there nearly half an hour. I went into his office with tears rolling down my bosom, and the floor of his office will be a witness to my tears until the day of judgment.[6]

After praying with Reverend Kollock in his office, Grimes returned to the home of his master, a physician and Reverend Kollock’s cousin. As Grimes wrote of the Kollock cousins: “One was a worldy man, the other was a Christian.”[7] Dr. Kollock brutally punished Grimes and sent him to jail for eight weeks, where he next saw Reverend Kollock; “he came to the diamond hole, and spoke to me, and asked me how I did,” Grimes wrote.[8]

Grimes’ story of Reverend Kollock’s visit to his jail cell and the Bible that Kollock sent to him in prison highlight the contradictions inherent in Reverend Kollock’s role as both a spiritual mentor and a slaveholder. The encounters between Grimes and Kollock must have taken place between Grimes’ arrival in Savannah in 1811 and his escape to New York in 1815. During this period, Kollock’s tax records list two slaves among his property from 1812-1814, three slaves in 1815, and two slaves from 1816-1817.[9] 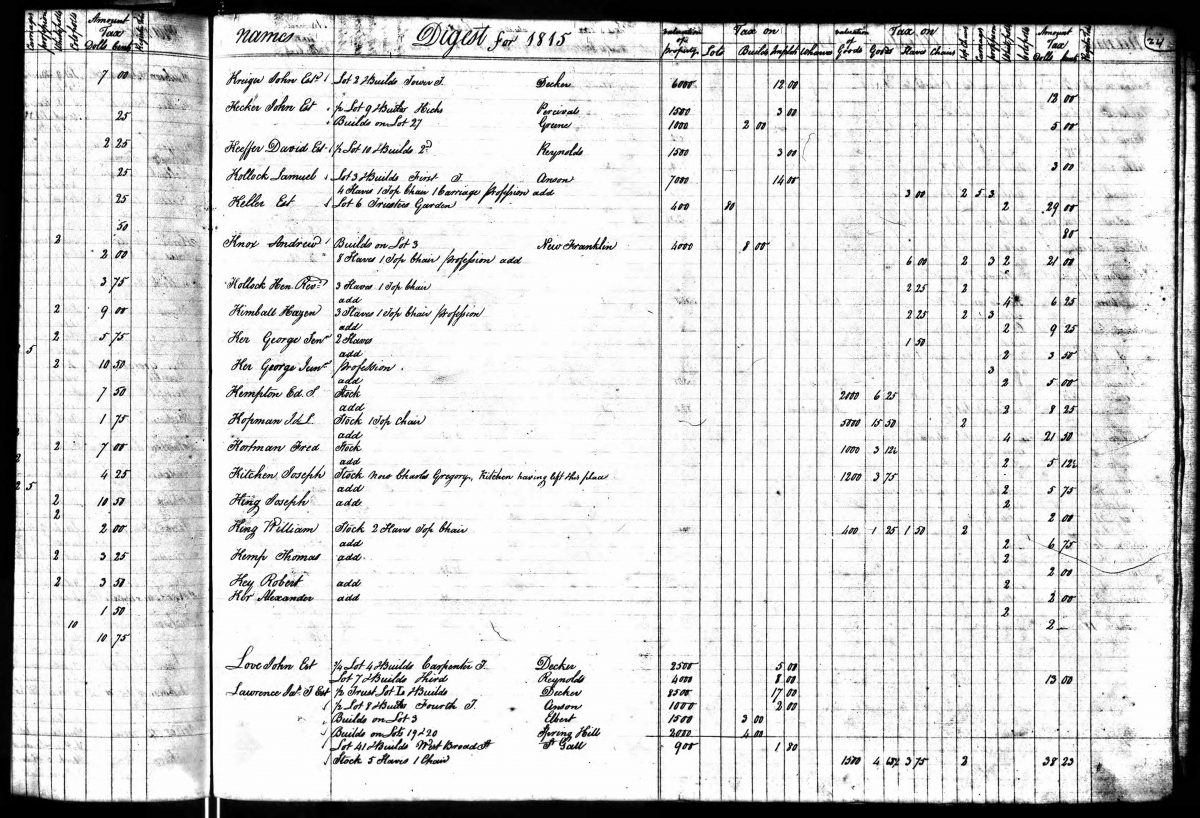 After the Presbyterian Church passed a resolution on alcohol abuse in 1812, members of the church approached Reverend Kollock about his perceived intemperance. Controversy over Kollock’s alcohol consumption led to his resignation from the presbytery, though his church’s independent status allowed him to remain a pastor. Kollock died in 1819 after two consecutive strokes; though he was buried in Savannah, his brother and colleagues erected a monument in his honor in the Princeton Cemetery. Kollock left everything—including his slaves, a mother and daughter—to his wife Mehetabel. But upon her death in 1833, Mehetabel's will made provisions for the two enslaved women, and demonstrated her allegiance to the American Colonization Society so heavily supported by Princeton clergy:

Her will also instructed Mercer to grant Hannah and Molly their freedom—and one hundred dollars—if they choose not to go, “so that they may never be the slaves of any person after my death.”[11] 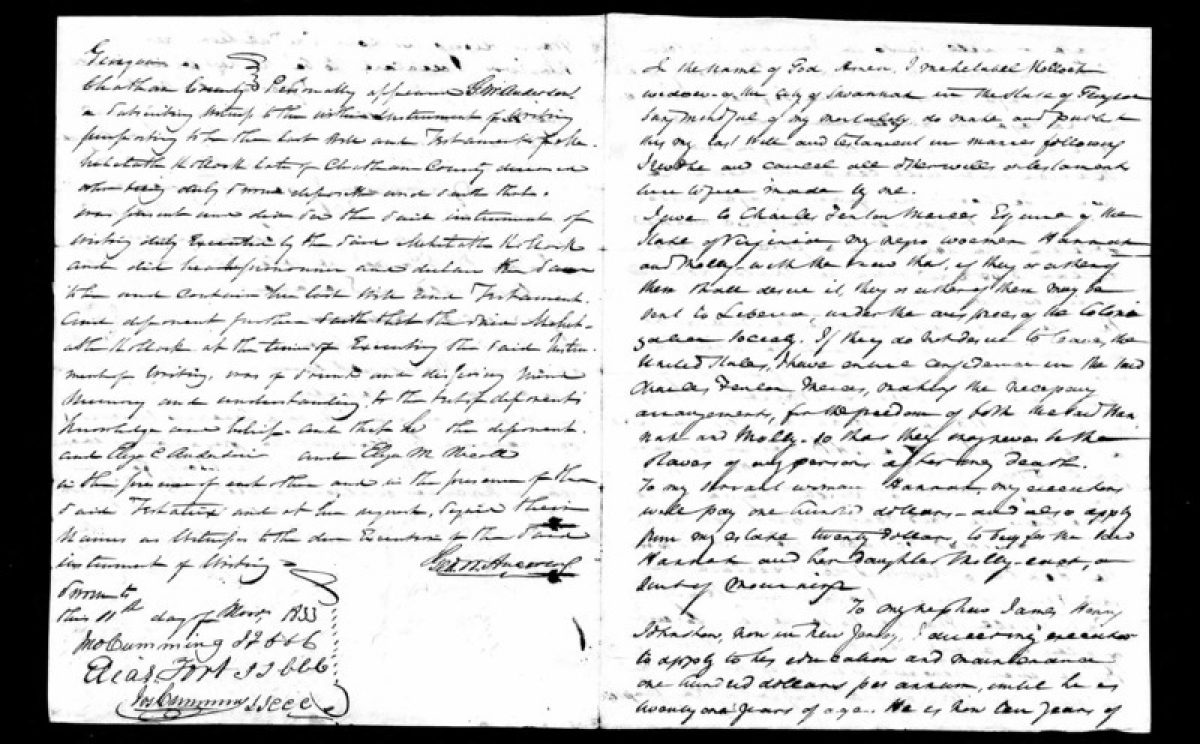 The will of Mehetabel Kollock, transferring Hannah and Molley to the American Colonization Society in November 1832.

Shepard Kollock, Sermons on Various Subjects by the Late Henry Kollock, D.D. with a Memoir of the Life of the Author (Savannah, GA: S.C. and I. Schenck, 1822), xiii-xiv.

Ibid., 63. Editors Andrews and Mason note that the “diamond hole” refers to “a round hole made by a diamond saw.”

Charles Fenton Mercer (1778-1858) graduated from the college in 1797 and was a member of the U.S. House of Representatives from Virginia from 1817-1839. He was linked to the Kollocks through Princeton, his Southern social networks, and his leadership in the American Colonziation Society.