In 1819, Princeton Mayor Erkuries Beatty engaged a recent College of New Jersey graduate to recapture his runaway slave, Joe. The incident underscores the terror and uncertainty of enslavement in central Jersey.

On a Thursday evening in March 1819, Joe fled from Princeton in terror. There was no time to pack or to plan. He took only the clothes on his back: a pair of corduroy pantaloons, a worn-down, dark brown body coat, half-soled shoes, and a homespun great coat with a large cape. There was no time to say goodbye to his parents or friends. By Friday morning, he reached Trenton and crossed the Delaware River toward Philadelphia.

Joe was handsome, standing about 5’8” in his billowing coat, with light skin and a fondness for strong drink. He was just shy of his twenty-first birthday. Philadelphia, with its cacophony of clopping carriages, rowdy grog shops, and bustling deep-sea shipping port, was his refuge. It offered a chance for anonymity. Among the throngs of merchants, artisans, and sailors, he was just another face in a faceless crowd. At the time, Philadelphia was home to the largest and most politically-active free African American community in the nation.

Perhaps, he thought, someone there could help him.

One week later, the mayor of Princeton, Colonel Erkuries Beatty, put pen to paper. He addressed his letter to his nephew James Hunter Ewing (class of 1818), a recent graduate of the College of New Jersey, now in his first year of medical school at the University of Pennsylvania. Beatty skipped the usual pleasantries and formalities and got straight down to business. “My Black man Joe has absconded from me,” he announced to Ewing:

He had been out in the town here at a negroe frolick all night, rioting, & the magistrates talked of having them all up and punished, which scared him off, & indeed I helped myself for I wanted to break him of these bad habits. 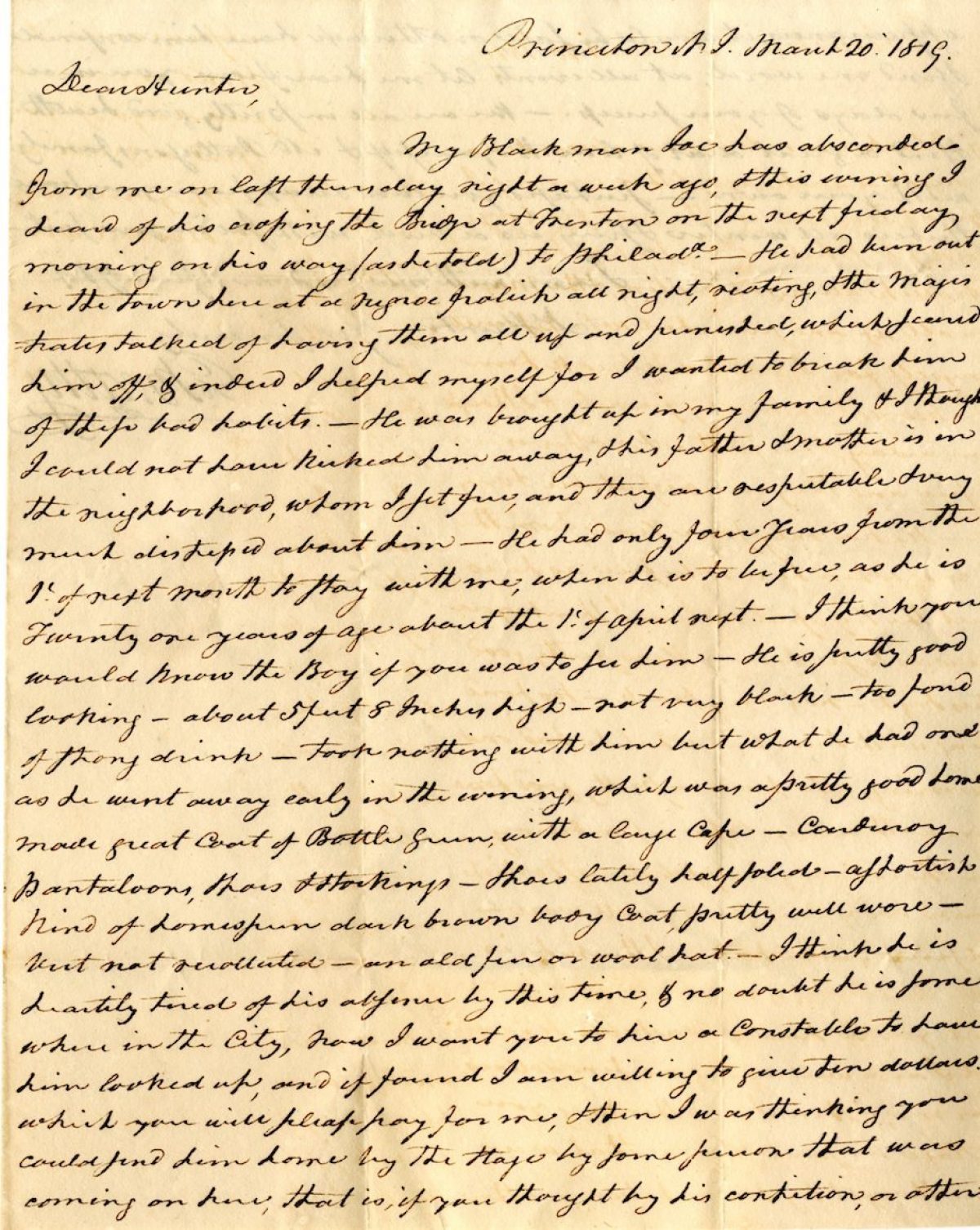 A letter from Mayor Beatty to James Hunter Ewing (class of 1818), describing the runaway slave Joe.

Somehow (he did not divulge any details), Beatty got wind of Joe’s movement toward Philadelphia. He described the runaway’s physical appearance and clothing, and instructed Ewing to hire a constable and offer a $10 reward for his capture. Depending on Joe’s condition, Beatty asked Ewing to put him on a stagecoach for Princeton or lock him in jail. Either way, he concluded, “let me hear from you in a few days of your success.”[1]

Beatty must have known his nephew well to trust him with such an important task. Presumably, they met often while Ewing was an undergraduate at the College of New Jersey (now Princeton University). Ewing was a popular figure on campus. As one contemporary described him:

His correct deportment, urbane manners, and obliging disposition, rendered him a general favourite, not only with his fellow students, but also with the officers of the college.

Colonel Beatty also had deep ties to the institution. His father, a former trustee, had died in 1772 while traveling in the Caribbean to raise funds for the school among wealthy slaveholders. His brothers John (‘1769) and Charles (‘1775) were both graduates, and the former was a trustee. His son, Charles Clinton Beatty, attended the school with Ewing—both were members of the class of 1818. Beatty himself had studied for Princeton but opted to join the military during the Revolutionary War. After a successful career in the army, he returned home, and in 1794 John Witherspoon, the president of the college, sold him a large farm known as Castle Howard, which had been confiscated from Tory sympathizers.[2] 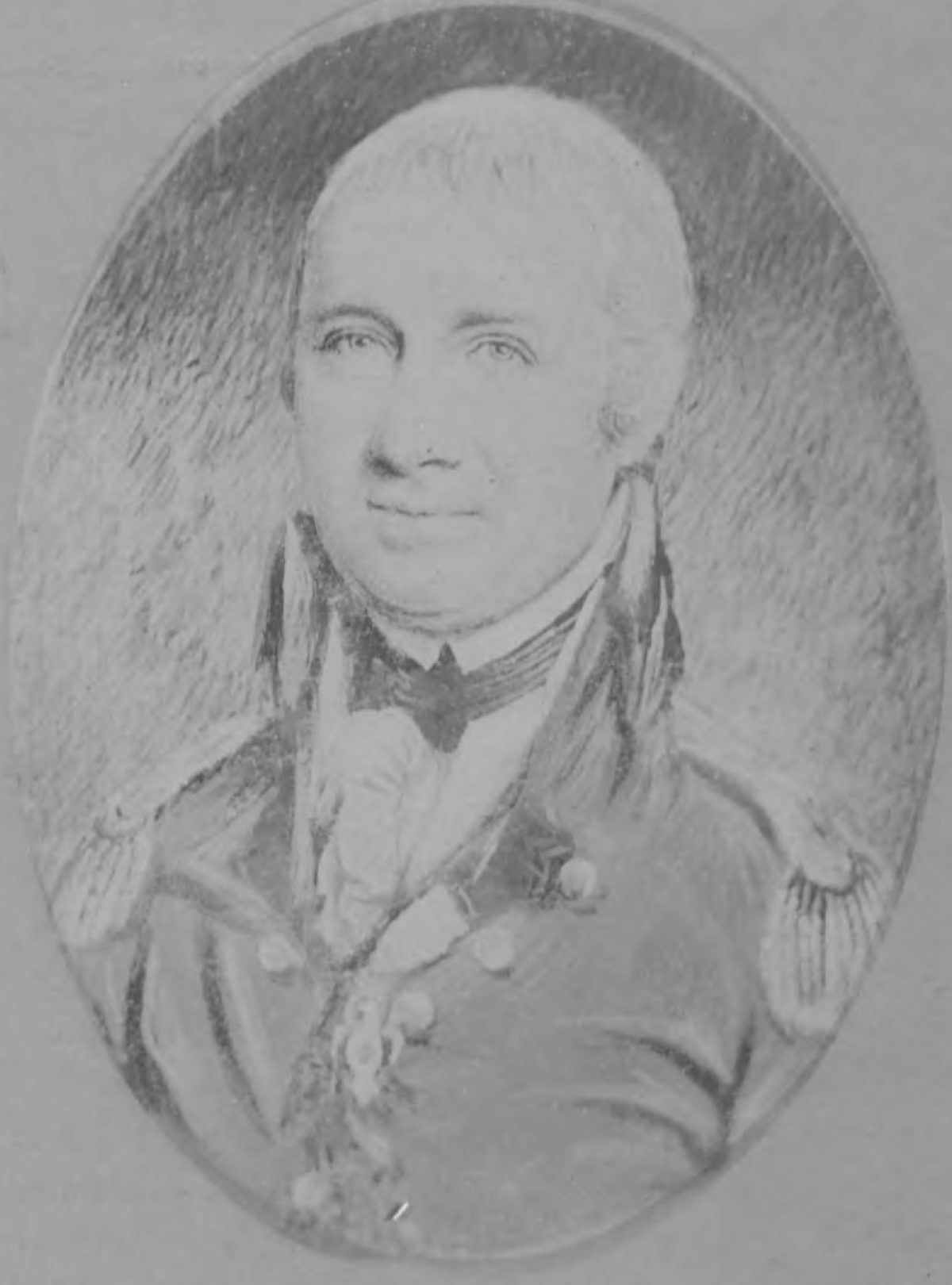 Portrait of Colonel Erkuries Beatty, the second mayor of Princeton, published by his son, Charles Clinton Beatty (class of 1818).

Beatty ran his farm, located about one mile south of Princeton, with scientific precision. One historian refers to him as a “proto-capitalist.” He monitored commodity markets closely and exploited slave labor to increase his profits. He enslaved at least eight people on the property deeded to him by Witherspoon. In 1799, he purchased Bristol, Mary, and their infant son, Joseph, for 160 pounds. He agreed to free both parents after two years, “provided they behaved themselves well.” As the parents passed their peak productive years and became more expensive to sustain, their offspring became more valuable. Beatty’s will, drawn up in 1810, listed two of their children, Joseph and Levi, among his possessions. He ordered both to be set free at the age of twenty-five, in line with New Jersey’s recently-passed gradual emancipation law. Two others, Phoebe and Sally, he bequeathed to his wife, “with all of their issue.” Women’s reproductive labor, as Beatty knew, was essential to the ongoing success and profitability of the estate.[3]

By the time of Joe’s escape in 1819, Beatty was fifty-nine years old and had retired from Castle Howard to become the mayor of Princeton. From his elegant, colonnaded mansion on Nassau Street, he kept a close eye on both the college and the town. He also maintained an active presence in state and local politics. At various times, he served as a judge and in both houses of the New Jersey state legislature. In November 1816, he presided over the nation’s first public colonization meeting. Joining prominent college graduates and faculty members at Princeton’s Presbyterian Church, Beatty called on the state legislature and the federal Congress to support their plan to send free black Americans to Africa.

Newspaper report of the nation’s first colonization meeting, held at Princeton on November 6, 1816.

Joe’s thoughts on Beatty's activities are not recorded, but may be evident by his subsequent actions. His escape to Philadelphia brought him into a hotbed of anti-colonization activism. As early as January 1817, community groups in Philadelphia denounced the scheme’s racist implications and forcefully asserted the right of all black Americans to participate in American society. As their grassroots protests gained steam, they laid the groundwork for what would become the abolitionist movement.[4]

Beatty’s effort to recapture his runaway slave is significant for at least two reasons. Similar to runaway advertisements published in local newspapers, it demonstrates that policing and surveillance—the cornerstones of any slave system—were a community endeavor. Strangers and travelers attracted scrutiny, and those with a darker skin tone suffered special attention. The unnamed spies who tracked Joe’s movements toward Philadelphia fed crucial intelligence to the mayor’s mansion. One could surmise that these favors were reciprocated. As a powerful politician and a leader of the nascent colonization movement, Beatty could exert influence across the state. Family and professional networks were equally important. Beatty’s nephew, recently graduated from the college at Princeton, was trustworthy enough to act as his uncle’s proxy in Philadelphia. The same “correct deportment” and “obliging disposition” that made Ewing so popular among students and teachers made him an excellent slave catcher.

The incident also underscores the terror and uncertainty of enslavement in central Jersey. Although the details of the “negroe frolick” are unknown, the consequences were severe enough to cause Joe to risk everything in a bid for his freedom. Beatty’s stated desire “to break him” clearly also played a role. It was common practice to whip slaves in public for even minor infractions. Sylvia Dubois, who lived in Princeton during the first half of the 19th century, described such a scene in nearby Flemington:

I have; see ’em lick a dozen of ’em at a time. Tie ’em right up to a post, and give ’em hell, right on the bare back—fetch the blood every time; and they’d holler! Good God! They’d howl till you could hear ’em a mile; and then, when they had cut the back all in slits, they’d put salt in the gashes.

The pain was agonizing, often spread out over several days, and repeated on a regular basis. Drinking and dancing, what Beatty called a “frolick,” would often lead to such punishments. “That’s the way they used to fix the old slaves,” recalled Dubois, “give ’em a holiday to have a little sport, and then if they had any fun, lick ’em till they’d have a sore back till the next holiday come.” At least until the 1830s, the flagpole at the center of Princeton doubled as a whipping post for the town’s black residents.[5]

Letter to the editor describing the the whipping post at the center of Princeton.

Intense physical abuse added to a fear of permanent enslavement. Under New Jersey’s gradual emancipation law, male slaves born after July 4, 1804, were to be freed at the age of twenty-five. Beatty’s will suggests that he intended to follow the spirit of the law in Joe’s case. But Joe’s earlier birth date meant that, technically, he was a slave for life. It was not uncommon for slave traders to smuggle individuals out of New Jersey to feed the growing demand for forced labor in the plantation economies of the South. Men in their early twenties were especially vulnerable. And while there is no indication that Beatty considered breaking his agreement, if he died before the moment of emancipation, there was no guarantee that his executors would honor his plan. With his twenty-fifth birthday rapidly approaching, perhaps Joe sensed the danger of his position and the crackdown on his activities provided a catalyst. Would he be prosecuted by the authorities in Princeton? Would a young slave receive fair treatment? Was his future freedom in jeopardy? The prospect of being shipped to Africa, if the mayor had his way, may have provided additional motivation to escape.[6]

Joe’s sudden departure came as something of a surprise to Beatty. “He was brought up in my family & I thought I could not have kicked him away,” he wrote to Ewing. Both of Joe’s parents lived in Princeton, he noted, “and they are respectable & very much distressed about him.” Whether they agreed with Beatty’s plan to recover their son, or if Beatty added this note to assuage his nephew’s conscience, is not clear. Whether Ewing was successful in his mission to locate the wayward young man or whether Joe returned voluntarily is also unclear. But he probably did return at some point. An inventory of Beatty’s estate, taken soon after his death in March 1823, listed “2 Colored Women & 2 Boys” valued at $280. After household goods, they were his single most valuable investment. The following month, as Beatty’s corpse lay under a marble slab next to the college presidents in the Princeton cemetery, Joe turned twenty-five. His ultimate fate remains unknown.[7]

Joseph Yannielli received his PhD from Yale and was the Perkins Postdoctoral Fellow in the Princeton Humanities Council. He is an expert on the history of slavery and abolition, with a special focus on America, West Africa, and the wider world during the nineteenth century. His other areas of interest include political and social movements, missionaries and religion, capitalism and globalization, and the United States in the world. At present, he is completing a book about the Mendi Mission and the role of Africa in the American abolition of slavery. He is the founding manager and lead developer of the Princeton and Slavery website and several other digital history projects.

View all stories by Joseph Yannielli »