“Let the Southerns Come Here”: Letters of a Slaveholding Father and Son

The extensive correspondence between antebellum Princeton student Henry Kirke White Muse and his slave-owning father illustrates the College of New Jersey’s appeal to southern students as well as its conservatism on the issue of slavery.

Contents
Introduction “Master of Myself” "The College of the Union” “Correct Principles” About the Author References
Tags: Alumni Campus Southern States Student Life
Share this story:

On September 28, 1855, Henry Kirke White Muse (c.1838-1858) left his “parental root,” a family plantation in Louisiana, to “launch” himself “into the cold world” as a freshman at Princeton.[1] After two weeks of travel, he reached New Jersey—and found a letter from his father already waiting. This “first weekly messenger of parental love” inaugurated a series of letters the young man known as Kirke received from his father James Holcomb Muse during his time at Princeton.[2]

Determined to maintain regular contact and contribute to the “formation” of Kirke’s “character” despite their separation, James used his letters to examine copious aspects of Kirke’s new life—from advocating proper poses for studying to a warning to “by all means, avoid excessive chess-playing.”[3] With his son embarking on a lengthy stay in the North, James’s fatherly advice formed part of a targeted educational agenda. Although Princeton had a large proportion of southern students, a fact that appealed to and reassured many slaveholding parents, James still wrote regularly to keep Kirke mindful of his ties to the South. At Princeton, Kirke took lessons in Latin and mathematics; from his father’s letters, he learned about family expectations and his complex ethical and fiscal obligations as a slave-owner. Yet the tensions inherent in the pursuit of a principled life and the ownership of slaves remained unquestioned, and unresolved, in James and Kirke’s correspondence. 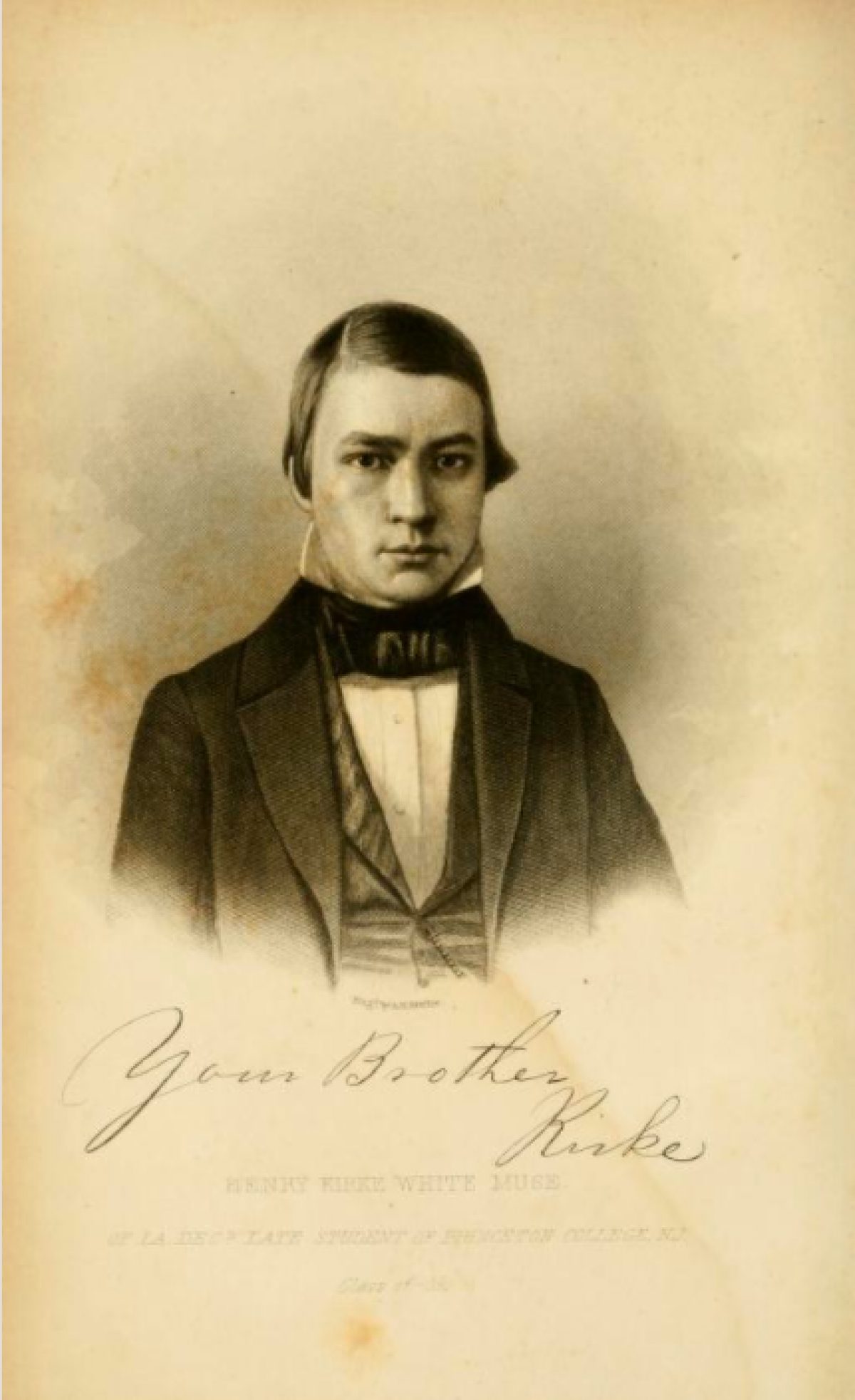 Kirke’s departure for Princeton marked a rupture for father and son, and their first two years of correspondence stress moral and political negotiations, often reflecting tensions about Kirke attending Princeton. In December 1855, just months after his son’s departure, James mentioned being “most severely censured for having sent you to Princeton,” and urged Kirke not to “disappoint” the “many fond hopes and high expectations entertained for you.”[4] In February 1856, James penned an expansive note encouraging Kirke to “cultivate an abhorrence of what is evil, and a love of that which is good,” in order to “be able to say in the majesty of an exalted mind, an expanded heart, and a well-ordered life, I AM MASTER OF MYSELF.”[5]

Yet James and Kirke were also the masters of enslaved people, and their letters reveal the centrality of slavery to the Muse worldview. Kirke left for Princeton from “Pleasant Hill,” the Louisiana cotton and corn plantation where his twice-widowed father and three half-siblings lived.[6] Accordingly, when he arrived at the college, he brought with him a sense of slavery’s normality and utilitarian benefits. Originally from Tennessee, Kirke’s father James had married Julia Granby Edwards in Mississippi in 1833, and they moved to Louisiana before Kirke’s birth.[7] By 1850, James owned thirty-six acres and thirty-nine slaves in Clinton, East Feliciana—a wealthy parish dominated by plantation agriculture, where the majority of white households held slaves.[8] Kirke manifested his concern for and interest in the plantation in his first letter from Princeton: “Tell me,” he wrote, “how things are at home—crops, health of the neighbors and Clinton.”[9] The young man kept himself well informed by other means as well, later lamenting a poor crop, “for I see by the papers that cotton is bringing such good prices.”[10] In his letters, particularly those to his siblings, Kirke inquired after individual slaves—often asking about “‘Mammy,’ and Alonzo, and Uncle L and all.”[11] And in his return letters, James referred to “mak[ing] the negroes’ clothes,” “sickness among the negroes,” and “the blacks.”[12] 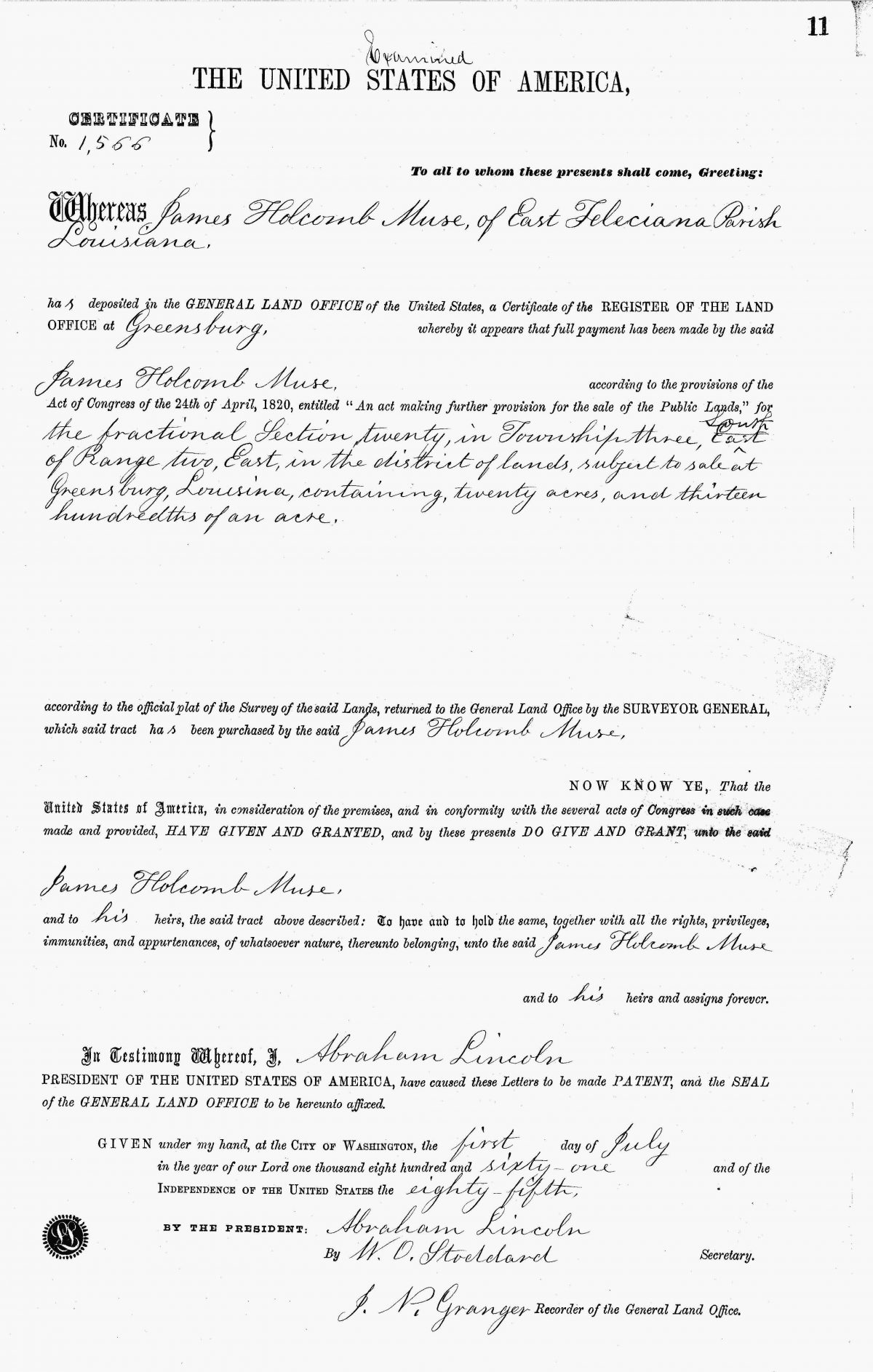 Certificate detailing the land purchased by James H. Muse in Louisiana in 1861.

"The College of the Union”

James believed that his letters would prove edifying not only to his son, but to a larger public, and in March 1855 declared that he wished to publish their correspondence. Information on Princeton’s political culture “would be read with pleasure by parents at the South,” he said, asking Kirke to write more about the college’s attitude toward slavery. Discuss “the subject of slavery and non-slavery being alike excluded from Princeton,” he instructed his son, “also the exclusion of Southern and Northern, Eastern and Western, as terms of reproach or of separation.”[13] James may have believed that spreading Princeton’s reputation for conservatism on the issue of slavery would ease the social pressures he faced for having sent his son North. Kirke, however, declined his father’s request, writing:

Princeton is such a dull place that it would require the pen of Washington Irving himself to make any thing connected with it interesting.[14]

While Kirke never directly discussed slavery in his letters, he did begin to write about Princeton’s political climate—perhaps as a partial nod to James’s request. In April 1856, he described a meeting at Yale College featuring the prominent abolitionist Henry Ward Beecher. At the meeting, Kirke wrote, two Yale professors had publicly opposed appeasing the South. But, he assured his father, “be sure that such a thing could never take place at Nassau Hall”:

That June, with tensions mounting around the 1856 presidential election, Kirke again emphasized the lack of abolitionist sentiment on campus, or at least antislavery students’ relative silence:

He further informed James, “I am now a Whig, and hope to be one all my life, whether they are strong or weak”—information that aroused no paternal response.[17]

James waited a year to broach the topic of slavery again. Then, in August 1857, he penned a lengthy missive intended for publication, examining the “motives which should urge you” in the “duties which devolve upon you as the owner and master of slaves.”[18] Indeed, James wrote that “one of the greatest excellences of character to which I can aspire…[is] the reputation of having been a good master to my slaves.” As he explained:

Regarding the relation of master and slave, in our country, as a permanent one, and as involving great moral and religious responsibility, and expecting…to bestow upon you…some estate in slave property, I feel, and my reflections have greatly increased my solicitude upon this subject, a great desire to see you regulate your life by correct principles, in this important relation.[19]

Viewing slavery as a “permanent” institution, James argued that slave-owners’ financial interests were in part dependent on the health and well-being of their human property. He accordingly advised Kirke to approach the position of “master” as a “prudent capitalist.” Kirke’s “first consideration” should be the “security and preservation of his capital…in a pecuniary point of view.”[20]

“That your slaves…should be clothed, housed, and provisioned…is, most manifestly, your interest, as…one of the most certain means of securing your capital inherited in a slave estate,” he wrote.[21] Nor should slaves be overworked. While “a certain amount of physical labor” “is absolutely conducive” to “good health, a sound body, and the enjoyment of life,” James warned that “over-working your slaves would be calculated to defeat” the “productive value” of both slaves and estate.[22]

Indeed, James declared, “that system of management which tends most to develop the man, instead of the mere rational animal, in the slave, will, with rare exceptions, increase his intrinsic value as a slave.”[23] James’s letter reveals little awareness of any moral tensions in his worldview. Without a hint of irony, the planter articulated a strategy that acknowledged enslaved people’s humanity—but only as a means of increasing their monetary value as property.

Like his father, Kirke’s letters never explicitly acknowledged any ethical scruples regarding slave ownership. Even while noting that Kirke should not “only” view his slaves as “property, purely and simply,” capitalist considerations dominated his advice.[24] And Kirke clearly took his father’s counsel seriously. In February 1858, while mortally wounded from a steamship accident after his first trip home from Princeton, he described how “at College he had exerted himself constantly to fulfill” James’ “hopes and ambition in regard to him.”[25] Perhaps because a Princeton education failed to challenge his foundational beliefs, Kirke remained inextricably tied to his “parental root.”

Paris Amanda Spies-Gans is a Ph.D. candidate in Princeton University’s Department of History with a focus on gender, print, and visual culture in early modern and Revolutionary-era Europe. Her dissertation explores the implications of the Revolutionary era for women artists in Britain and France. Paris received her A.B. in History and Literature from Harvard College in 2009, an M.A. in Art History from the Courtauld Institute of Art in 2010, and an M.A. in History from Princeton in 2013. She has been involved in the Princeton Public History Initiative from its inception.

J. H. Muse, Correspondence with My Son, Henry Kirk White Muse. Embracing some brief memorials of his character, and essays from his pen, while a student at Princeton College, New-Jersey (New York: John A. Gray, 1858), 287-288. Upon Kirke’s early death in 1858, James published their correspondence and dedicated it to the Princeton class of 1859, with which his son would have graduated had he lived.

Muse, Correspondence with My Son, 36. James was candid with his son about fiscal ebbs and flows, and in 1855 and 1856 doubly suffered from legal defeats and a poor crop.

Kirke continues, “Since the Northern wing of Know-Nothings have fused with the Black Republicans, who will almost certainly nominate Colonel Fremont, it is thought by many they will be successful. I read the New-York Tribune occasionally, and will send you a copy of it and the Herald soon.” Ibid., 134.

He continues, “The Know-Nothings here have given me a bad opinion of that party.” The Whigs eventually endorsed the Know-Nothing ticket at their final party convention in September 1856. Ibid., 137.

Ibid., 198. James soon after instructed Kirke to “copy my letters on slavery, and send me the copies revised and corrected. I want to see what they are.” Ibid., 212.

Ibid., 14. Kirke’s obituary recorded these as among his last words before his death on 23 February 1858.