A Moment in Nassau Hall

A Moment in Nassau Hall

"The pace of things is inconceivably altered in Princeton within a fortnight,” wrote a Princeton College student to his father on July 5, 1783. “From a little obscure village,” he continued, “we have become the capital of America. Instead of almost total silence in town, nothing is to be seen or heard but the passing and rattling of wagons, coaches, and chairs, the crying about of pineapples, oranges, lemons, and every luxurious article both foreign and domestic.”

The commentator was 19-year-old Ashbel Green (class of 1783), later president of Princeton. The metamorphosis he described had come about from the flight of the Continental Congress from Philadelphia the previous month. With all of America still awaiting the final peace treaty being hammered out in Paris that would end the long War for Independence, hardened veterans of the Pennsylvania Line mixed with militiamen surrounded the Statehouse in Philadelphia on June 21, 1783, demanding their pay for the last six months. Assembled a few days later in what is now known as Independence Hall, the Continental Congress found itself threatened as well by incensed soldiers who had fought the long war inadequately clothed, armed, and provisioned — and with their pay far in arrears. Congress’s delegates, unable to get assurances that Pennsylvania’s government could protect them, withdrew 45 miles north to the village of Princeton, N.J. There, in a hamlet with about 70 houses, they would remain until Nov. 3. 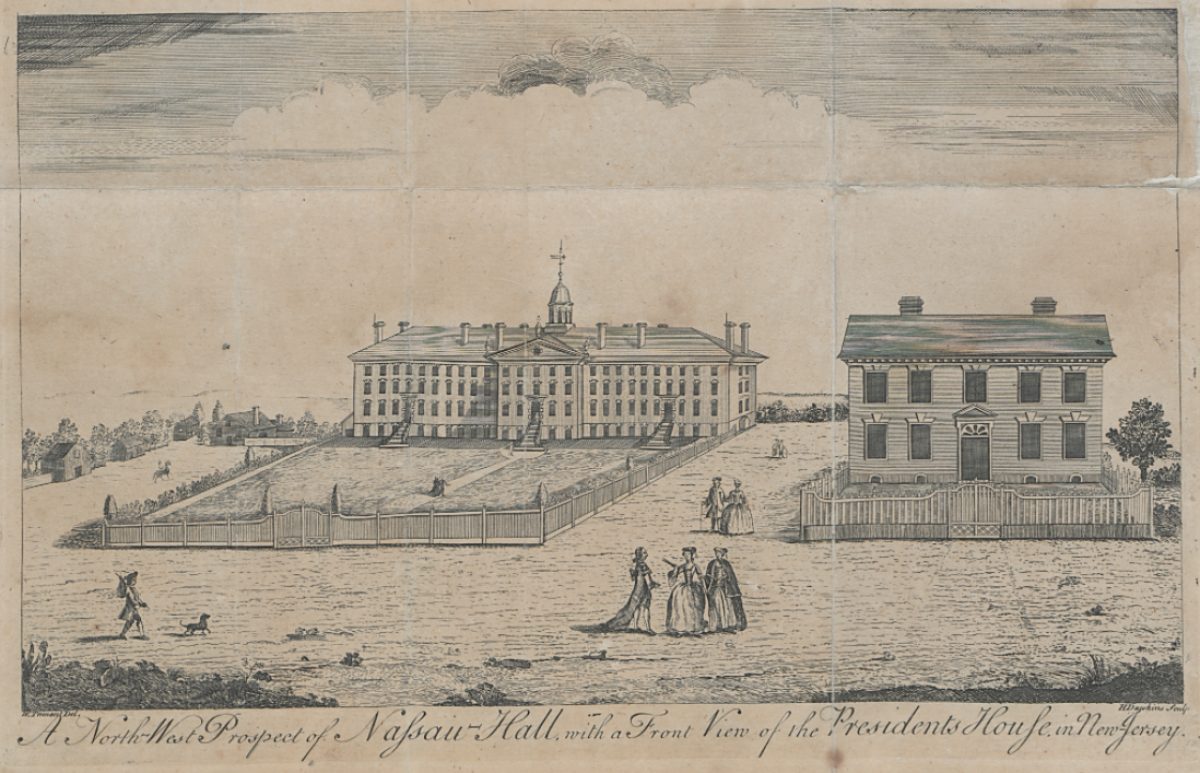 An early engraving of Nassau Hall and the President's House on Princeton's campus. Nassau Hall briefly served as the seat of the Continental Congress in 1783.

Through the fetid summer, Congress debated the establishment of a peacetime military organization, the payment and demobilization of Washington’s army, and the location of a permanent capital. Meeting in what is now the Faculty Room of Nassau Hall, Congress also gave attention to still smoldering relations with Native American tribes (most of whom had fought on the British side), reception of foreign emissaries, and general complaints about the inadequacies of the Articles of Confederation.

Then, on Oct. 8, in an event that has receded into the mists of history, Princeton villagers and members of the Continental Congress beheld the arrival of an unusual delegation of somberly dressed men astride horses. They had come from Philadelphia to raise an issue that the Continental Congress did not wish to address: the plight of half a million American residents — one-fifth of the people — who had been listening to memorable words about inalienable rights and how America would usher in a new age of freedom and justice, but who were condemned along with their children to lifelong slavery. The four men carried a parchment titled “The Address of the People Called Quakers.” Tumbling off the pages were the signatures of 535 citizens from five states, including nearly every notable figure of the Philadelphia-centered Society of Friends.

The address had been hammered out two weeks before when the Quakers’ Philadelphia Yearly Meeting met for four days in late September. At such gatherings, as many as 1,000 Quakers from New Jersey, Pennsylvania, Delaware, Maryland, and Virginia would gather to decide on policy statements, do business, and connect with friends. After weighty discussion, they agreed to implore Congress to abolish the barbarous African slave trade and restore slaves’ natural rights.

The Yearly Meeting leaders delegated four men to carry the antislavery memorial to Princeton. It was a striking quartet. The oldest and best known was Anthony Benezet, a self-deprecating Philadelphia schoolteacher who had opened a school for black children, free and enslaved, insisting they were as capable as white children. Seventy years old, he was frail, only seven months from his grave, but still in full possession of a resounding voice that reached across the Atlantic through his pamphlets and books preaching the abolition of the slave trade.

Almost as recognizable was James Pemberton, a wealthy Philadelphia merchant, who, with his two brothers and many other Quakers, had been exiled to Winchester, Va., in 1777-78 as suspected British collaborators. The 60-year-old Pemberton was one of the founders of the Pennsylvania Abolition Society, soon to become its president. One would not know of his wealth from his drab clothing.

Less known was David Cooper, a 58-year-old plainspoken farmer from Woodbury, N.J. In 1772, he had turned from the plow to scratch out Observations on Slave Keeping, a passionate pamphlet that helped spark an antislavery debate. Just months before arriving in Princeton he followed up with A Serious Address to the Rulers of America on the Inconsistency of their Conduct respecting Slavery, Forming a Contrast Between the Encroachments of England on American Liberty, and American Injustice in Tolerating Slavery. Cooper was an intensely serious man. He meant his pamphlet to drive an arrow straight to the heart of war-weary Americans glad to celebrate their David-over-Goliath victory and get on with the business of expanding westward to conquer more fertile land.

The youngest in the delegation was Warner Mifflin, age 38. Descended from a Quaker pioneering family, he had grown up on Virginia’s Eastern Shore. There he was surrounded by nearly 100 slaves and, reaching adulthood, became the heir of many more. Conscience-struck, he had freed his slaves in 1774 and 1775, then convinced his father to follow his emancipationist fervor. From that point on, Mifflin’s life’s work was to serve, as he often put it, “my afflicted African brethren.” Energetic, voluble, and obsessive, he would soon become the conscience of the newborn United States. Nearly 7 feet tall, he was hard to miss.

Arriving in Princeton, probably on the evening of Oct. 7, the Quaker emissaries sought out Elias Boudinot, New Jersey delegate and the Continental Congress’s president. Boudinot had studied law with Princeton’s Richard Stockton ('1748), himself a descendant of Quakers. Stockton had married Boudinot’s sister, and Boudinot had married Stockton’s sister — a double bonding of brothers-in-law.

The visiting Quakers knew that reaching out to Congress in person was their best chance at success. Boudinot warned them off. It was not customary for petitioners to have an audience with Congress, he said; it would suffice to leave their address with him, to be put before the body at an appropriate time. But the delegation insisted, arguing that history was waiting for Americans to fulfill the promissory note they had announced with their declaration in 1776 about the inalienable rights that came not as an earned privilege but by dint of birth. Boudinot relented, affording the Quakers an almost unprecedented opportunity to address its elected legislature in person.

Dressed in Quaker gray, the delegates filed quietly into Nassau Hall at noon on Oct. 8. True to their principle of refusing “hat honor,” a time-honored worldly way of marking class distinctions that offended their belief in the equality of all, they kept their black broad-brimmed beaver hats atop their heads as Boudinot introduced them to a solemn Congress. Then the quartet distributed copies of an address deploring the slave trade that the London Yearly Meeting had presented to Parliament only months before, igniting a spirited debate. Pemberton, his head still covered, gravely read the petition aloud. The memorial began with the “great satisfaction” that “those ... who have been held in bondage by members of our religious society are generally restored to freedom, their natural and just right.” But now, with the bloodletting at an end, would Congress not step forward to stop those who “are prompted by avaricious motives to renew the trade for slaves to the African Coast, contrary to every humane & righteous consideration & in opposition to the solemn declarations often repeated, in favor of universal liberty”? The glaring contradiction that a nation birthed in liberty was resuming the inhuman slave trade would be an offense to the Creator and mock the nation’s founding principles.

The Quaker delegation had every reason to expect a cool reception. Almost half the congressmen were slave owners themselves, mostly from the South, and many Northern congressmen had participated in building, capitalizing, and manning the slave ships that for decades had brought cargoes of enslaved Africans across the Atlantic. Moreover, for holding to their founding principle of pacifism during the War for Independence — refusing to take up arms, pay war taxes, or swear oaths of allegiance to state governments — Quakers had been roundly condemned. They had paid dearly for this, losing their right to vote in Pennsylvania, for example, and sometimes being imprisoned and exiled as suspected British collaborators.

Yet the delegation reported that it was “respectfully received.” Some congressmen dined with the Quaker lobbyists to hear their arguments. Some had a grudging respect for the Quakers, the first in the pre-war American colonies to oppose the enslavement of Africans as a crime against humanity and Christian beliefs. Quakers were the first to establish an abolition society: the Pennsylvania Abolition Society, founded within a few weeks of the firefights at Concord and Lexington in 1775. And they were the only religious group in the Western world that had declared, in 1775, that one could no longer be both a slave owner and a group member.

Civility aside, Congress did nothing, leaving the Quaker address on the table. But the delegation left Princeton with the assurances of Boudinot that he would revive the petition after the Congress relocated to Annapolis. And so he did. In November the petition was referred to a three-person committee, including Thomas Jefferson; the committee recommended only that individual states could consider enacting laws consonant with the non-importation agreement of the First Continental Congress that pledged (but could not enforce) the banning of the slave trade after December 1775. The full Congress in early 1784 voted down the committee report.

The petition may have influenced the debate in motion to settle a plan of government for the western territories that the states were relinquishing to the national government. In the “Plan of Temporary Government of the Western Territory,” a clause specified that “after the year 1800 there shall be neither slavery nor involuntary servitude” in the territory. But with the fate of countless enslaved people hanging in the balance, Congress voted down this clause March 1, 1784, by a single vote.

Gary B. Nash (’1955, *1964) is a Distinguished Research Professor at the University of California, Los Angeles, and the author of Warner Mifflin: Unflinching Quaker Abolitionist.

View all stories by Gary Nash »

A version of this article first appeared in the October 3, 2018 issue of the Princeton Alumni Weekly as "A Moment in Nassau Hall."

Share this Story:
Did You Know...?A fugitive slave worked on the Princeton campus. Read More