The Minstrel Tradition at Princeton University

Princeton students performed in blackface in the 19th and 20th centuries, until as late as 1949. The legacy of Princeton’s minstrel traditions continues to live on in American culture through the popular folk song “I’ve Been Working on the Railroad.”

Today, “I’ve Been Working on the Railroad” is a popular folk song for American children. What few remember now is that the song uses a melody first published as “Levee Song” in the 1894 College of New Jersey (now Princeton University) songbook Carmina Princetonia.[1] (Notably, one of the songbook’s editors was 1877 alumnus Moses Taylor Pyne, one of Princeton’s most prominent benefactors, who had family connections to the Atlantic slave trade.) In 1918, the song was re-published with new lyrics as “The Eyes of Texas” in The University of Texas Community Songbook.[2] 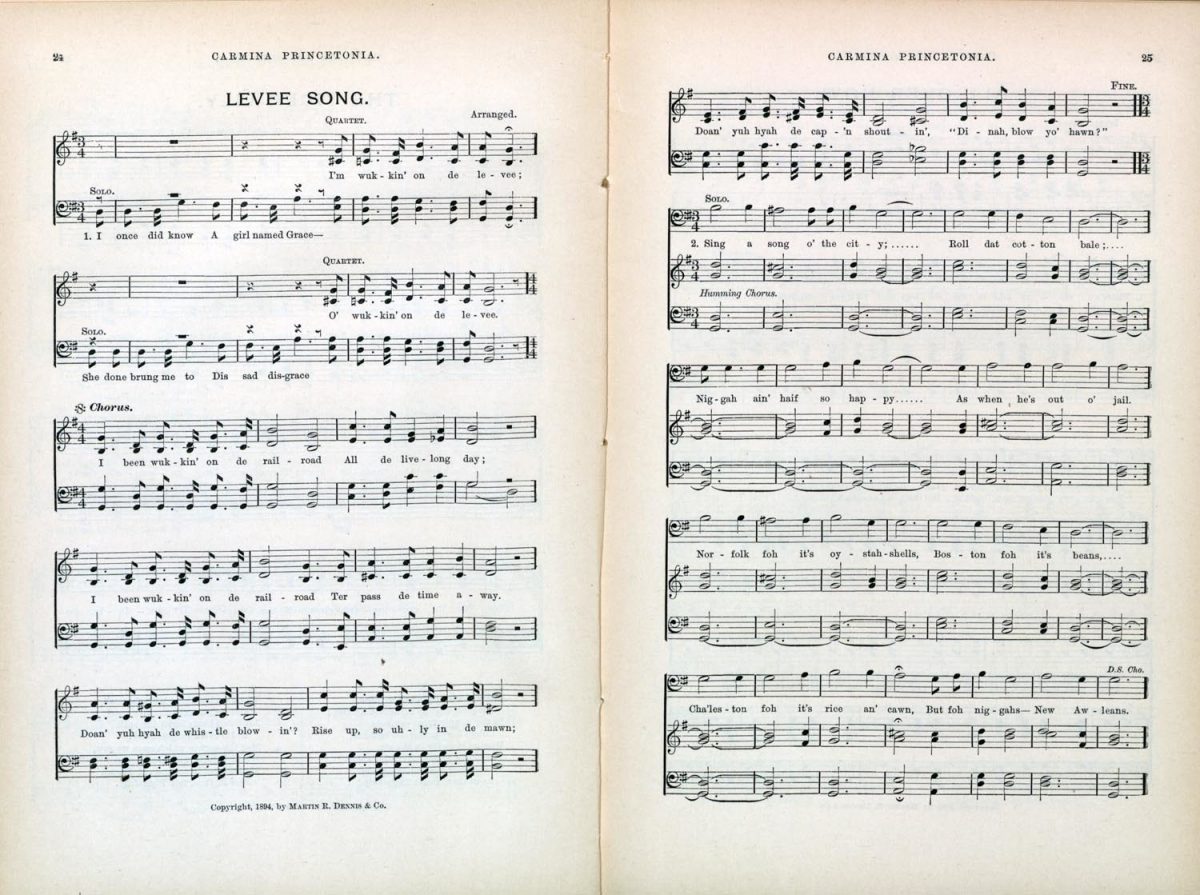 Score of "Levee Song," published in Carmina Princetonia: The University Song Book in 1894.

“Levee Song” was already well known by the time of its publication. Princeton’s Glee Club included “Southern Levee Song” in a series of concerts in 1892, two years before its publication.[3] But the song may actually date back to as early as the 1830s and 1840s. Its lyrics originally referred to the use of African American labor to construct levees across the South. As black labor shifted from building levees to building railroads, so too did the lyrics presented along with the tune.[4] The 1894 Princeton version includes references to both levees and railroads.

Alumni seem to have strongly associated their alma mater with the song. In 1900, Alexander McDowell Wilson (class of 1897) wistfully recalled his time at Princeton, writing:

With a lusty good will I could join you in singing once again the Levee Song.[5] 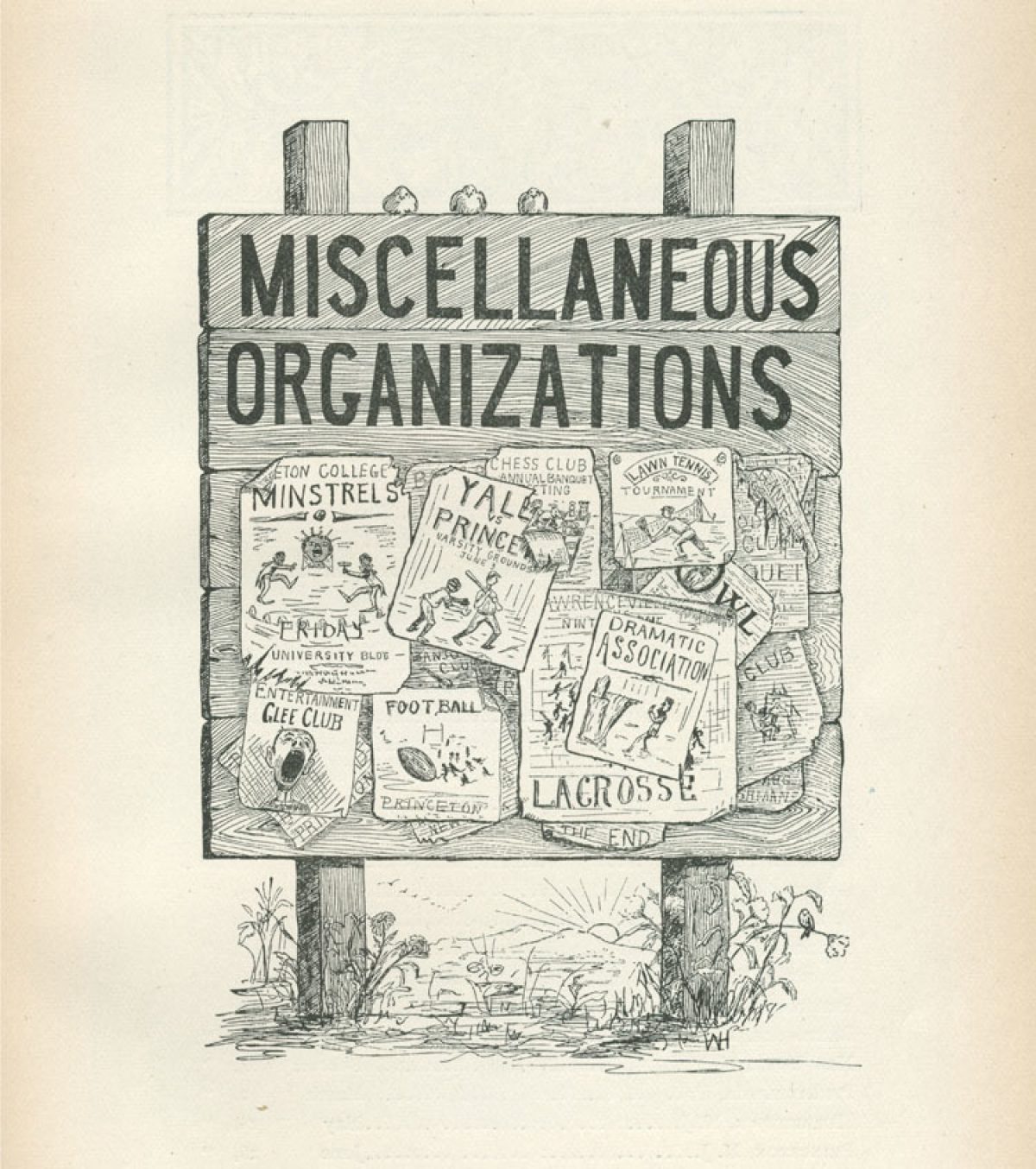 Illustration depicting posters for "Miscellaneous Organizations" at Princeton, including minstrel shows, published in the Bric-a-Brac in 1890.

Following the Civil War, late 19th-century Princetonians began performing blackface minstrel shows, a common form of entertainment among white Americans expressing nostalgia for slavery and white supremacy. All three songs (“Levee Song,” “I’ve Been Working on the Railroad,” and “The Eyes of Texas”) have origins in these minstrel shows.[6]

Princeton’s minstrel tradition may have begun in 1886, when students complained that they had no “outlet for our long pent-up humorous and jocular emotions.” A minstrel show would solve this problem, wrote the editors of the Princetonian:

Such a performance would certainly be acceptable to any College audience; it will be especially acceptable here.

They noted that Princeton was late to become involved in minstrelsy, but that similar entertainment was popular at rival institutions:

The enthusiastic reception which College audiences everywhere else have always given to their minstrel troupes, should encourage them to go ahead with their plan. They need have no fear about the support of the College.[7]

Although few records remain to give details of what Princeton’s early minstrel shows may have been like, the genre itself has enough common themes to allow us to speculate. Often, white performers in blackface parodied southern slaves; at other times, they mockingly portrayed free blacks living in northern cities. These shows were a way for white Americans to express their political views through entertainment. As scholar Rachel Sussman has written, minstrel shows were a way for whites to “ignore the pressing issues of race, believing that the reality of slavery was as it was portrayed on the minstrel stage.”[8]

Minstrel shows drew on an imagined black culture rather than reality.[9] Performers portrayed their black characters as lazy, stupid, and vain. White actors and audiences viewing African Americans through this lens could avoid confronting the true injustice of slavery or Jim Crow laws, assuring themselves of their superiority over black Americans. We have no reason to believe Princeton’s minstrel shows diverged from these themes.

Though minstrel shows declined in popularity nationwide after the early 20th century, they lived on at college campuses, including Princeton. In 1949, the New York Times called the Triangle Club’s production of “All in Favor” a “faithful imitation of the old-time minstrel show.”[10] 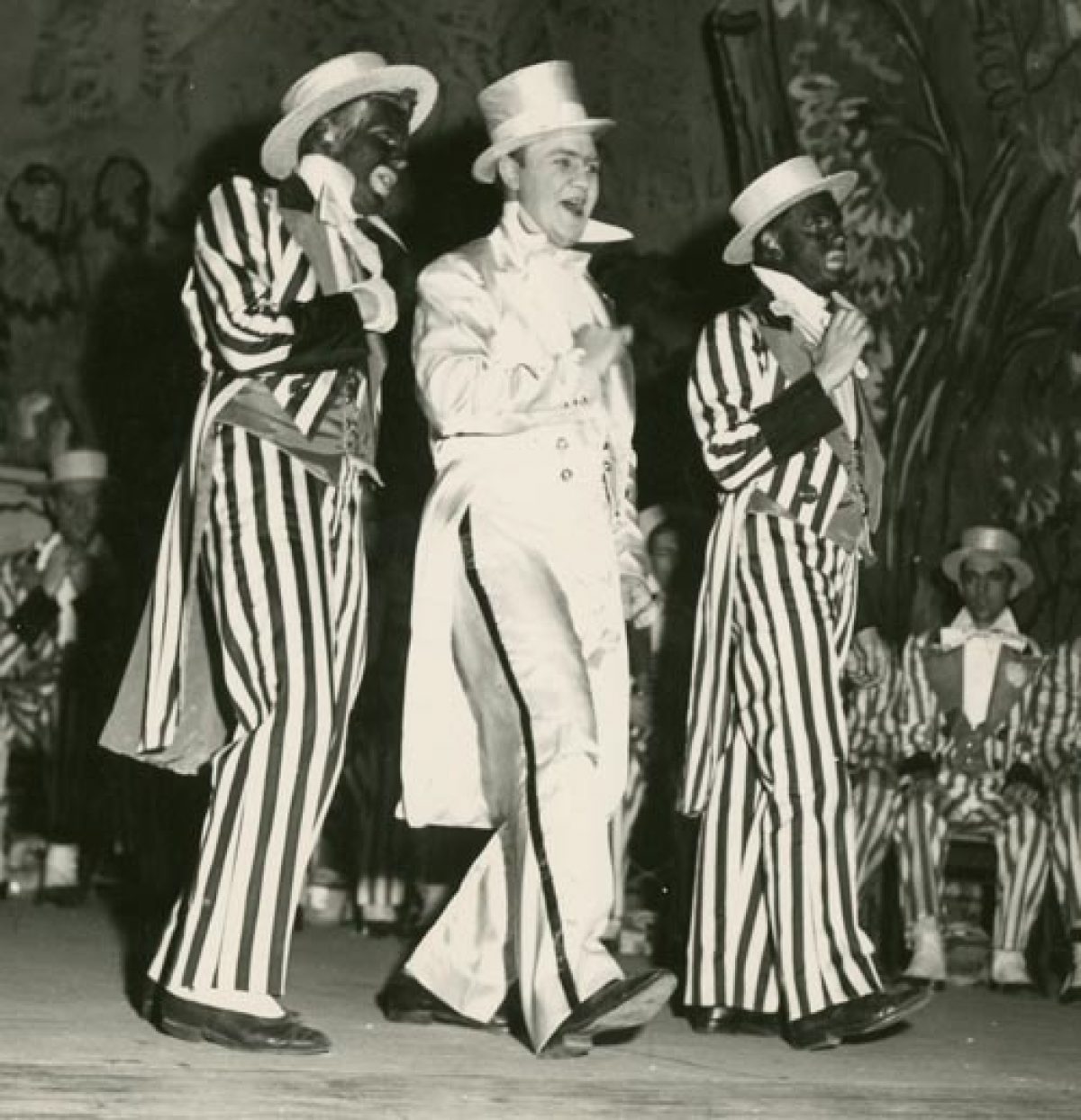 Photograph of Princeton students in blackface during the Triangle Club's performance of "All in Favor," which the New York Times called "a faithful imitation of the old-time minstrel show."

Given the changes in Princeton’s student population and its expressed determination to act in the service of humanity, minstrel shows no longer have a place on campus. Still, it is worthwhile to recall that they were performed on campus after World War II, when Princeton’s first African American undergraduates arrived on campus.