Reverend I. W. L. Roundtree, who attended the Princeton Theological Seminary in the 1890s and received a Master’s degree from the College of New Jersey in 1895, was one of Princeton’s earliest African American graduates. He may also have been the first and only former slave to graduate from the college.

Contents
"One of the most unique figures in New Jersey" Early Life and Education Roundtree at Princeton About the Author Bibliography References
Tags: African Americans (Free) African Americans (Enslaved) Alumni
Share this story:

"One of the most unique figures in New Jersey"

In August 1904, the Trenton Evening Times printed a profile on I. W. L. Roundtree—a minister in the African Methodist Episcopal Church whom the paper considered “a bright example of the stable and intelligent colored American citizen.”  He was a leader in New Jersey’s black community, with “a career which combined the political leadership of his racemen with ministering to their spiritual wants.” In this, the Times reported, Roundtree was an “ambitious and untiring worker in the cause.”[1]

Born into slavery, Roundtree “by his own efforts raised himself” to a position of prominence in his community as a minister, teacher, and civil rights activist—making him “one of the most unique figures in New Jersey.”[2] And as one of Princeton’s earliest African American graduates—and the only former slave known to have attended the school—Roundtree was and remains a unique figure in Princeton University’s history as well. 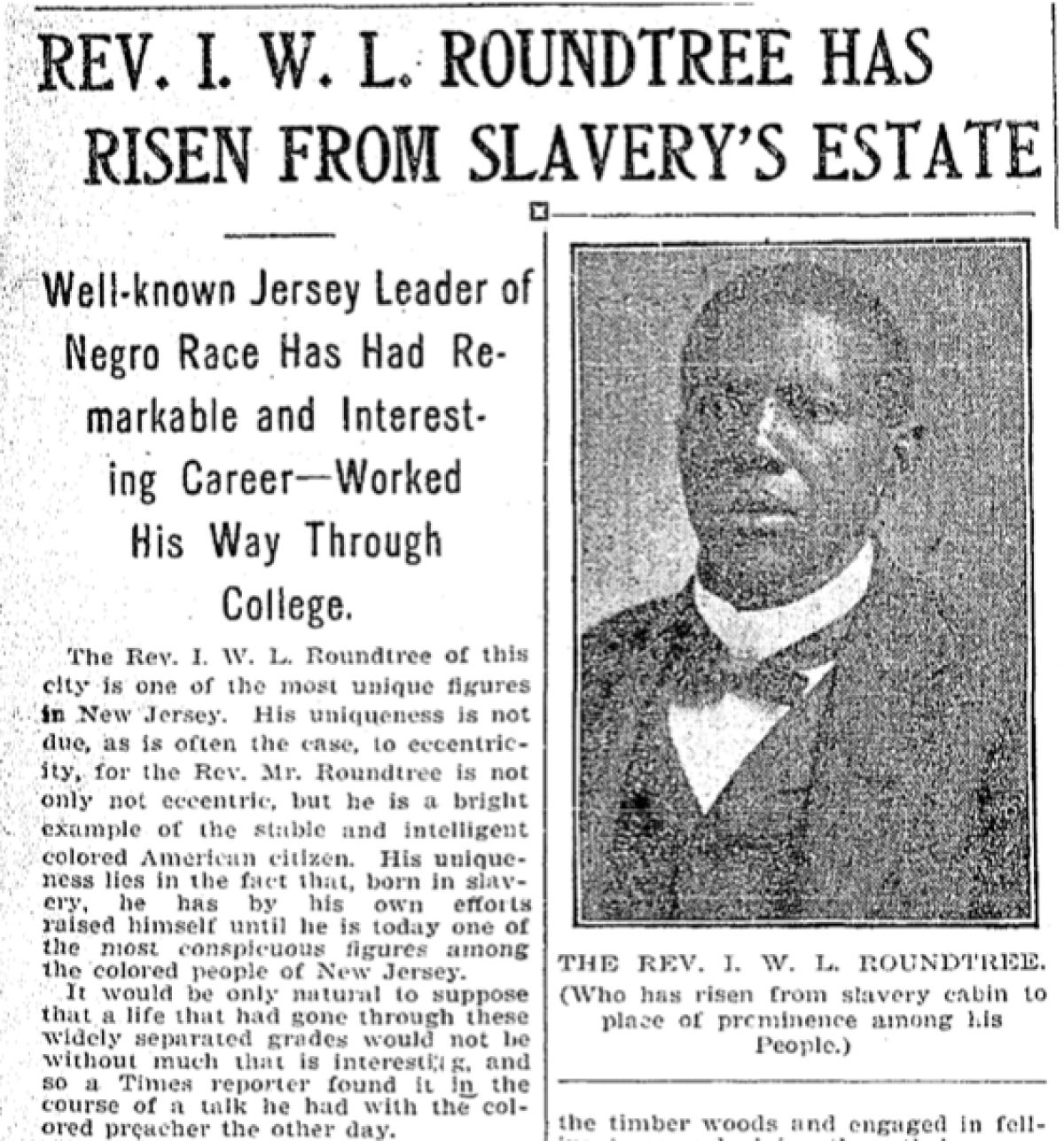 Irwin William Langston “Dominie” Roundtree was born into slavery in Georgia some time before the end of the Civil War, though sources conflict as to his exact birth year. The 1910 Federal Census for Mercer County, New Jersey, records his birth year as 1860, and in a 1904 interview Roundtree told the Trenton Evening Times that he was born during the Civil War, though he was likely a few years older.[3] Princeton Theological Seminary alumni files list his birthdate as September 15, 1855, suggesting that he would have been about ten years old when the Thirteenth Amendment was ratified in 1865.[4] This date would align more closely with what Roundtree told the Times of his early memories:

I remember little of my early life except the fact that I was a slave, and the incident of my freedom, which was celebrated by the singing of old plantation songs and hand-shaking, accompanied by prayer.[5]

Roundtree was not able to attend school while enslaved. Two or three years after he was emancipated, he attended a “three months’ country school” taught by a black Union Army veteran. Teachers were hard for freedpeople to find, and the distance Roundtree had to travel to attend classes became prohibitive. Roundtree reportedly learned to read and write from a Sunday school teacher, a minister named John Sharpe, who also provided instruction in “the catechism of the Methodist church.” When Sharpe’s school closed, Roundtree recalled, “the colored people found another teacher”—though this man’s school was even farther away, six miles from Roundtree’s home. But his father, a preacher, insisted that Roundtree attend for the next three months.[6]

“As years came on, I was compelled to stop schooling and help my father on the farm,” Roundtree said, but “I hoped to complete my education, as my religious life was forming with tendencies to the ministry. This was ever present.”[7]

To continue his education, Roundtree worked his way across the former Confederacy. After moving from Georgia to Live Oak, Florida, he found employment “felling trees,” at a local saw mill, and on the railroad—with this work, Roundtree said, “I found myself with enough money to go on with my studies.” He entered the Cookman Institute in Jacksonville, Florida, in the fall of 1876, studying under the Reverend S. P. Darnell, who had been sent south by the Methodist Episcopal Church to train teachers and ministers for “the colored people of the south.”[8]

As he ran out of money, Roundtree would go to work and build savings until he could return. He taught school for rural African Americans in the Florida, “in the country districts among my people,” and saved enough money to continue his education.  He entered the Home Missionary Baptist School in Live Oak, then Howard University in Washington, D.C. In 1882, he enrolled at Lincoln University in Chester County, Pennsylvania, and finished his undergraduate degree, working his way through school again, this time as a hotel waiter and bootblack. After serving as a high school teacher and pastor in Virginia for two years, Roundtree entered Drew Theological Seminary in Madison, New Jersey in 1888.[9] He also studied at Princeton Theological Seminary from 1892 to 1894. While a seminarian, he pastored the Mt. Pisgah African Episcopal Church in Princeton and enrolled at the College of New Jersey as a graduate student.[10]

The records associated with Roundtree’s time at Princeton are sparse.[11] However, we do know that he studied under philosophy professor Alexander T. Ormond and received his Master of Arts degree (A.M.) in 1895.[12] At the time, admission to the graduate program at Princeton was left entirely at the discretion of individual professors, although candidates must already have received an undergraduate degree prior to beginning graduate studies. Their course of study could then proceed in one of three ways: exclusive study under the faculty of the College of New Jersey, pursuit of one course per semester for two years followed by exams covering the course material, or submitting a written thesis of at least 5,000 words by April 1 in the third year following receipt of an undergraduate degree. At the conclusion of this, the degree candidate would pay a fee of ten dollars and receive his diploma.[13] Roundtree was reported to have taken “a three years past [sic] graduate course at Princeton” to earn the degree.[14]

During the three years Roundtree would have been a student, Ormond taught graduate lecture courses on “Philosophy of the Nineteenth Century” (1893-1894), “Negative Theories of Knowledge” (1893-1894), “Types of Modern Metaphysics” (1894), and “Selected Topics in Philosophy” (1894-1895).[15] There are generally no descriptions on these classes given in the Catalogues, but the “Philosophy of the Nineteenth Century” course was said to be a historical overview with an emphasis on religion.[16] Roundtree may have attended other undergraduate courses as well; one source indicates that he studied “biology and astronomy and kindred subjects” while at Princeton.[17]

Following his graduate studies, Roundtree served as the pastor of the Mt. Zion African Methodist Episcopal Church in Trenton for 25 years, after which he went to Cambridge to study teaching. During his Trenton pastorate, Roundtree also studied law and attempted to take the exam to be admitted to the New Jersey Bar. Reportedly seeking to broaden his educational perspective, Roundtree spent a winter abroad at the University of Oxford in 1929. Roundtree believed education was vitally important for the future of African Americans in the United States and spent much of his time advocating for school reform. Like prominent African American educator and activist Booker T. Washington, he favored industrial education. Roundtree was also heavily involved in New Jersey politics as a prominent Republican advocate for racial equality, campaigning for an end to lynching in the South. After a long and celebrated career, I. W. L. Roundtree died in 1948.[18]

I offer thanks to Princeton University’s Religion in the Americas Workshop for their feedback on an early draft of this essay. The essay has been divided into multiple parts for the Princeton & Slavery Project website, including this story as well as “Erased Pasts and Altered Legacies: Princeton’s First African American Students” and “James McCosh and Princeton’s First Integrated Classrooms.”

Special acknowledgments go to my undergraduate assistants at Seeley G. Mudd Manuscript Library (Zachary Bampton, Mario Garcia, and Arthur Kim) for help with proofreading and serving as a soundboard for refining the text of later drafts.

My thanks to Kenneth Henke, Curator of Special Collections and Archivist of the Princeton Theological Seminary, for the information found in the PTS alumni files.