Jehu A. Orr (class of 1857) was a prominent slaveholder, Confederate leader, and colonel during the Civil War.  As the last surviving member of the Confederate Congress, he played an influential role in shaping Civil War memory in the 20th century.

Jehu A. Orr (1828-1921) was a College of New Jersey alumnus embedded in Southern and Confederate power networks. Born in South Carolina, Orr’s family moved to Mississippi during his childhood. Although he was initially a member of the class of 1849, he left Princeton in 1847 due to illness and did not receive his degree until 1857. Following the death of his first wife in 1852, Orr married Cornelia Van de Graaff, daughter of an Alabama lawyer. A large slaveholder himself, Jehu Orr was the younger brother of James L. Orr, another prominent slaveholder and politician who held prominent positions including Speaker of the House of Representatives, member of the Confederate Congress, and Governor of South Carolina.[1]

Orr held considerable influence in Mississippi government before, during and after the Civil War. He was appointed secretary at the 1849 state convention on slavery, where he transcribed the proceedings and resolutions against Congress.[2] Orr remained at the center of debates over slavery in Mississippi throughout his long career, holding several positions in state politics—among them Secretary of the State Senate, member of the Mississippi Legislature, District Attorney, and member of the Mississippi Secession Convention. In 1861, he was elected to the Provisional Confederate Congress and in 1864 to the Second Confederate Congress. A Confederate colonel during the war, Orr led his regiment into several battles, including against General Ulysses S. Grant’s troops at the Battle of Jackson.[3] Decades later, in an 1891 letter, Orr wrote: “I have no apologies to make for having tried to whip ‘Uncle Sam’; he whipped me and there’s an end of it.”[4] Following the war Orr became a Mississippi circuit judge, and continued to practice law and participate in the state justice system until his retirement in 1914. 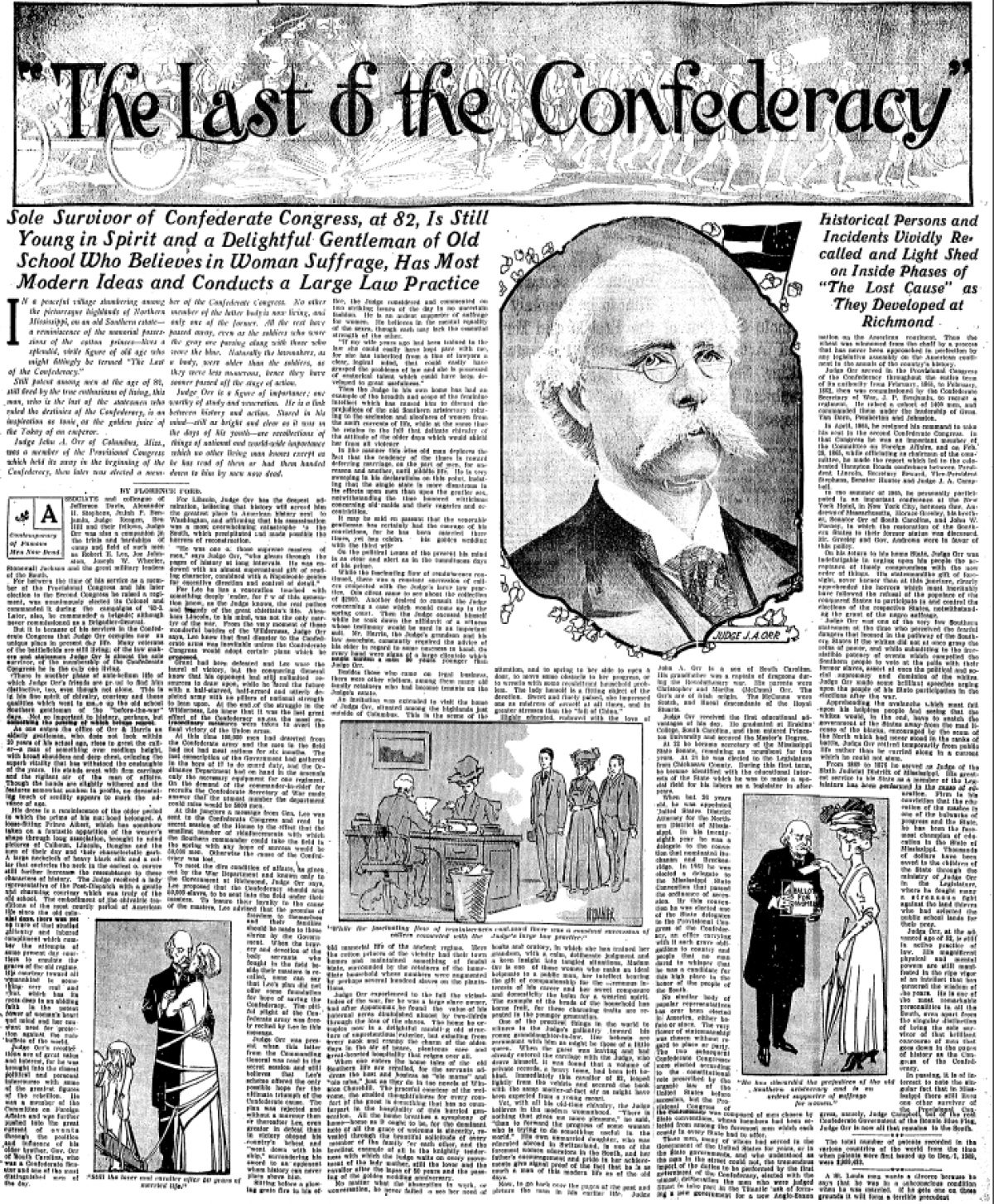 Orr lived to become the last surviving member of the Confederate Congress. In 1910, a feature in the St. Louis Post-Dispatch described his life at age 82: “on an old Southern estate—a reminiscence of the manorial possessions of the cotton princes—lives a splendid, virile figure of old age who might be fittingly termed ‘The Last of the Confederacy.’”[5] The article, written by Florence Ford, continued with Orr’s reflections on politics and race following the Civil War:

Judge Orr was one of the very few Southern statesman at the time who perceived the fearful dangers that loomed in the pathway of the Southern States if the whites did not at once grasp the reins of power, and while submitting to the irresistible potency of events which compelled the Southern people to vote at the polls with their former slaves, assert at once the political and social supremacy and dominion of the whites… Apprehending the avalanche which must fall upon his helpless people and seeing that the whites would, in the end, have to snatch the government of the States away from the mad license of the blacks, encouraged by the scum of the North, which had never stood in the ranks of battle, Judge Orr retired temporarily from public life rather than be carried along in a current he could not stem.[6]

In addition to Orr’s political and military roles in the Confederacy, he was also an active voice in the creation of a post-war ideology that would long outlive him. In 1906, Orr delivered an address at the gravesites of Confederate veterans at an event organized by the United Daughters of the Confederacy. He spoke directly to young attendees about the importance of history and commemoration, reflecting on the importance of shaping historical memory. Orr’s message and intended audience were clear:

It is not to be inferred that I think any of the slave-holding Southern States need any apology. I wish to give you young people the assurance that the elements of character which went to make up a brave, chivalric, noble, self-respecting manhood were never more signally developed than in your slave-holding ancestry.[7]

Orr went on to deny that slavery had been the cause of the Civil War:

The right to perpetuate slavery was involved in the struggle, but to say that we went to war to continue the negro in slavery evinces a total misconception of the causes of the war.[8]

In part due to his unusual longevity and his active role in Mississippi politics into 20th century, Orr continued to represent the Confederacy—and shape local memory of it—long after the war ended. Ford’s sketch of Orr concluded with a reference to a powerful, enduring Confederate symbol: “of the real Confederate Government of the Bonnie Blue Flag, Judge Orr is now all that remains to the South.”[9]

Proceedings of a Meeting of Citizens of Central Mississippi in Relation to the Slavery Question: Also, the Proceedings of the State Convention on the Same Subject, October 1849 (Jackson, MS: Fall and Marshall, 1850).

Ford, “The Last of the Confederacy.”