Cezar Trent, one of the elite free black citizens of antebellum Princeton, was the employee of a prominent landowner, the object of a town resident's published recollections, and a slave owner.

An occasional employee of a prominent landowner, the object of a townsperson’s published recollections, and a slave owner, Cezar Trent was one of a select few free black citizens of antebellum Princeton whose life can be rendered in detail through the examination of historical records. Significantly, his dual status as both a member of Princeton’s free black community and a slaveholder challenges notions that free blacks were consistent critics of United States slavery.

In the autumns of 1786, 1787, and 1788, George Morgan, the owner of the large Prospect estate that bordered the College of New Jersey’s campus, paid Trent to cut and deliver firewood to a close friend's son, a Princeton student living in Nassau Hall.[1] On February 26, 1787, Trent inscribed his “X” mark in Morgan’s account book to acknowledge his purchase of a pair of “Wheat Shoes” from Morgan.[2] The last entry related to Cezar Trent in Morgan’s account book is dated November 1, 1792, when Trent received four shilling and three pence from Morgan “for Joseph Bristol’s labour in putting up fifty one pannels [sic] of fence, which is in full of all demands I have on him.”[3] Thus, while Trent was intermittently employed by Morgan, he was also a customer and a creditor.

During the early 1790s, the New Jersey State Gazette printed two advertisements proving that Cezar Trent owned slaves during his lifetime. The first advertisement was published on January 23, 1793. Entitled “Stop The Runaway!”, the announcement sought the return of Will Rigg, a black slave who “lately belonged to Caesar Trent, a negro in Princeton.”[4] This document proves both that Trent was a black man and that he owned slaves. It does not, however, indicate when Rigg belonged to Trent. Two years later, Cezar Trent took out another advertisement in the same newspaper for the sale of a slave, notifying the community:

TO BE SOLD,
A Likely, smart, healthy NEGRO MAN, about 30 years of age – He is very handy at house and all kinds of farming work. Sold for no fault but the want of a master. Any person inclining to purchase, will apply to the jailor in Trenton, or to the subscriber in Princeton at ‘Squire Morrison’s.
CAESAR TRENT
January 12, 1795[5]

This announcement confirms that Trent sold at least one slave during the period. It is not entirely clear if the slave for sale in 1795 was Trent’s property or if Trent was selling the slave on behalf of someone else. It is also possible that Trent was advertising a slave of his that had run away, as the notice suggests interested buyers consult with the jailor in Trenton in order to complete the sale. 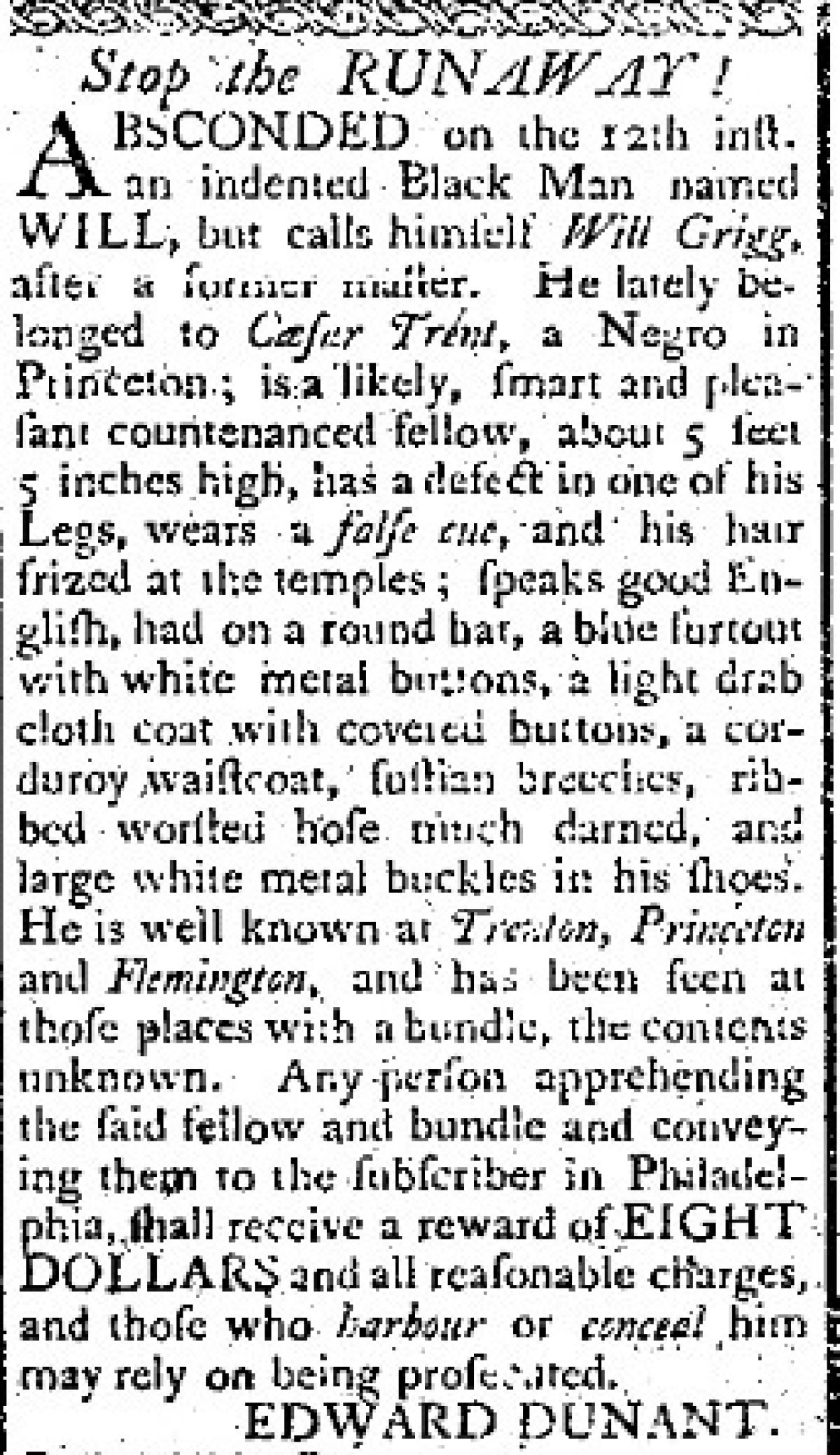 Runaway advertisement for Will Grigg, former slave of Cezar Trent, published in 1793.

Rise and Fall in the Princeton Community

According to Henry Clow’s recollections of Princeton in 1804, Cezar Trent was “a native of Africa, a character well known to the inhabitants, and students particularly.”[6] It is unclear whether Clow claimed Trent had been born in Africa solely as a way to identify him as black, or if he meant that Trent was actually born on the African continent. Fortunately, Clow provided more information about Trent’s life in Princeton, noting that his house was near the west side of the intersection of Nassau Street and Witherspoon. He remembered Trent as a clownish figure:

On the Fourth of July he [Trent] was often decorated with an old cocked hat and a continental coat, and after assisting them [the students] in firing the cannon, he was in the habit of using it as a temporary stage, on which he would deliver an Anglo-African speech, much to the amusement of his audience.[7]

The location of Trent’s house near the main entrance to the college and his participation in the annual Independence Day parade suggest that that he was a well-known member of the Princeton community. But perhaps Trent’s performance during the parade was not intended, as Clow assumed, to entertain the crowd—but rather to ingratiate himself with the white community. By acting in this manner, Trent allayed possible concerns that he was overstepping his social bounds. His antics reassured white residents that, despite owning considerable property (including slaves), he accepted a subordinate position in Princeton's social structure.

But Cezar Trent was no fool. In the late 1780s, Trent filed a case against John Sanderson regarding the sale of a horse. The New Jersey Supreme Court presided over the case in 1788 and ruled in Trent’s favor, ordering Sanderson to pay the full amount sought by Trent in the case.[8] In this instance, Trent’s participation in the legal system as a plaintiff before the State Supreme Court demonstrated that he was knowledgeable enough to successfully pursue a claim and that he had an understanding of how the legal system functioned.

Twenty years later, Trent’s name again appeared in court records. This time, however, he was the victim instead of the beneficiary of the legal system. In January 1808, an all-white jury in Somerset Country tried Cezar Trent for the crime of “receiving stolen goods,” though it remains unclear what type of goods Trent allegedly received. Trent asserted his innocence, but the jury ultimately found him guilty and sentenced him to one year of imprisonment and hard labor at the state penitentiary in Trenton.[9]

In 1809, the State of New Jersey filed a suit against Trent for “Debt on Costs (for Imprisonment).” The lawsuit sought to force Trent to pay what the state calculated as the cost of his prosecution and imprisonment.[10] Trent apparently did not comply, because after his death in 1813 the state seized two of his properties to recover his debt. In June 1814, the Somerset County Sheriff sold land in Princeton formerly belonging to Trent.[11] The sale netted $70, but not enough to settle Trent’s debt. In 1816, the New Jersey Supreme Court reapproved action against Trent’s estate. As a result, in May of 1816, the state sold Trent’s land in Maidenhead (present-day Lawrenceville).[12] 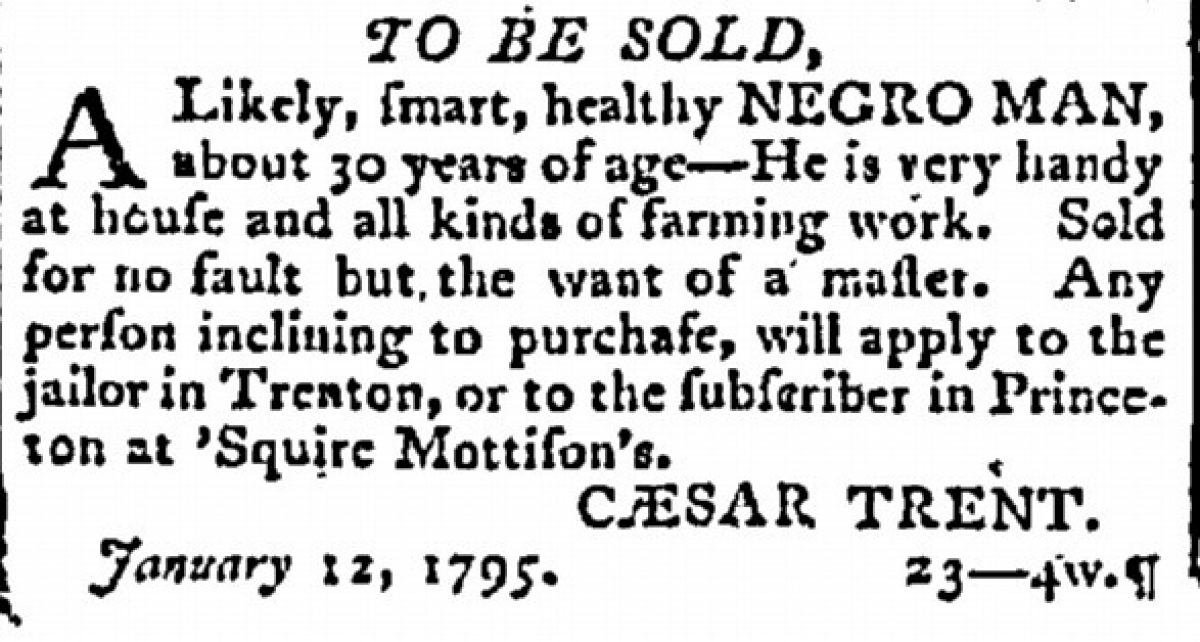 Advertisement for the sale of a man belonging to Cezar Trent, published in 1795.

Testament to a Local Network

When Trent died in October 1813, he left behind a will that provides hints about his family, confidants, and relationship with the Prospect estate. After settling Trent’s outstanding debts, the will arranged for the sale of Trent’s personal property and a plot of land in Maidenhead. The legal document awarded equal shares of the profit to Trent’s wife Caty and Peter Scudder, Trent's executor and “a free black man, late servant to Jon. I. Craig,” as well as $40 to Jude, a “servant girl of Ralph Sansbury.”[13]

Trent’s ownership of a house at the center of Princeton and an additional plot of land nearby reflected his financial stability. Twenty-five years after George Morgan paid him to cut and deliver wood to students at the College of New Jersey, Trent had acquired sufficient wealth and social status to bring a lawsuit before the New Jersey Supreme Court, sell slaves, participate annually in the Princeton Independence Day parade, and file an official will for his estate. Trent’s success was predicated on his ability to integrate into the larger, white-dominated society of Princeton. His capacity for navigating between the white and black communities—between men like Morgan and Scudder—allowed him access to resources, such as the state legal system, that were out of reach for the majority of free blacks.

Brett Diehl received his AB in History from Princeton in 2015. Subsequently, he has completed a two-year MPhil in Economic and Social History at the University of Oxford as a Sachs Scholar. He is currently preparing to enter law school.

View all stories by Brett Diehl »

Ibid., 184. “Wheat shoes” was a colonial term for leather boots.

Although the name “Joseph Bristol” does not appear in local census records, the 1789 New Jersey State Census does record a man named “Joseph Negro Bristor” living in the Princeton area. The similarity between the names and dates in the Morgan ledger book and the state census suggests that they refer to the same individual. Furthermore, an “X” mark next to Bristol’s name in Morgan’s ledger book indicates that he was illiterate, possibly explaining the discrepancy in the spelling of his surname. Finally, because the state census did not record the names of slaves, Bristol’s appearance in the census indicates that he was a free man.

“To Be Sold,” New Jersey State Gazette, 12 January 1795. In Henry Clow’s recollections of Princeton in 1804, which were published under the pen name "Selma" in 1850 in the Monmouth Democrat, he wrote that the house of “Squire Mathison” was adjacent to Trent’s house.

“State of New Jersey v. Cesar Trent,” New Jersey Supreme Court Case Files, Box 889, Item 37236, New Jersey State Archives; Harry E. Barnes, "A History of the Penal, Reformatory and Correctional Institutions in the State of New Jersey, Analytical and Documentary," Report of the Prison Inquiry Commission, Vol. 2 (Trenton, NJ: State of New Jersey, 1917), 63. Under the provisions of a law passed by the New Jersey legislature in December 1807 (only one month before Trent was found guilty) any person imprisoned in New Jersey was liable for the costs of their imprisonment, including legal fees, room, board, light, and heat. The law allowed the payment of this debt to be enforced through seizure of personal property.

“Cezar Trent Will and Inventory,” NJSA.