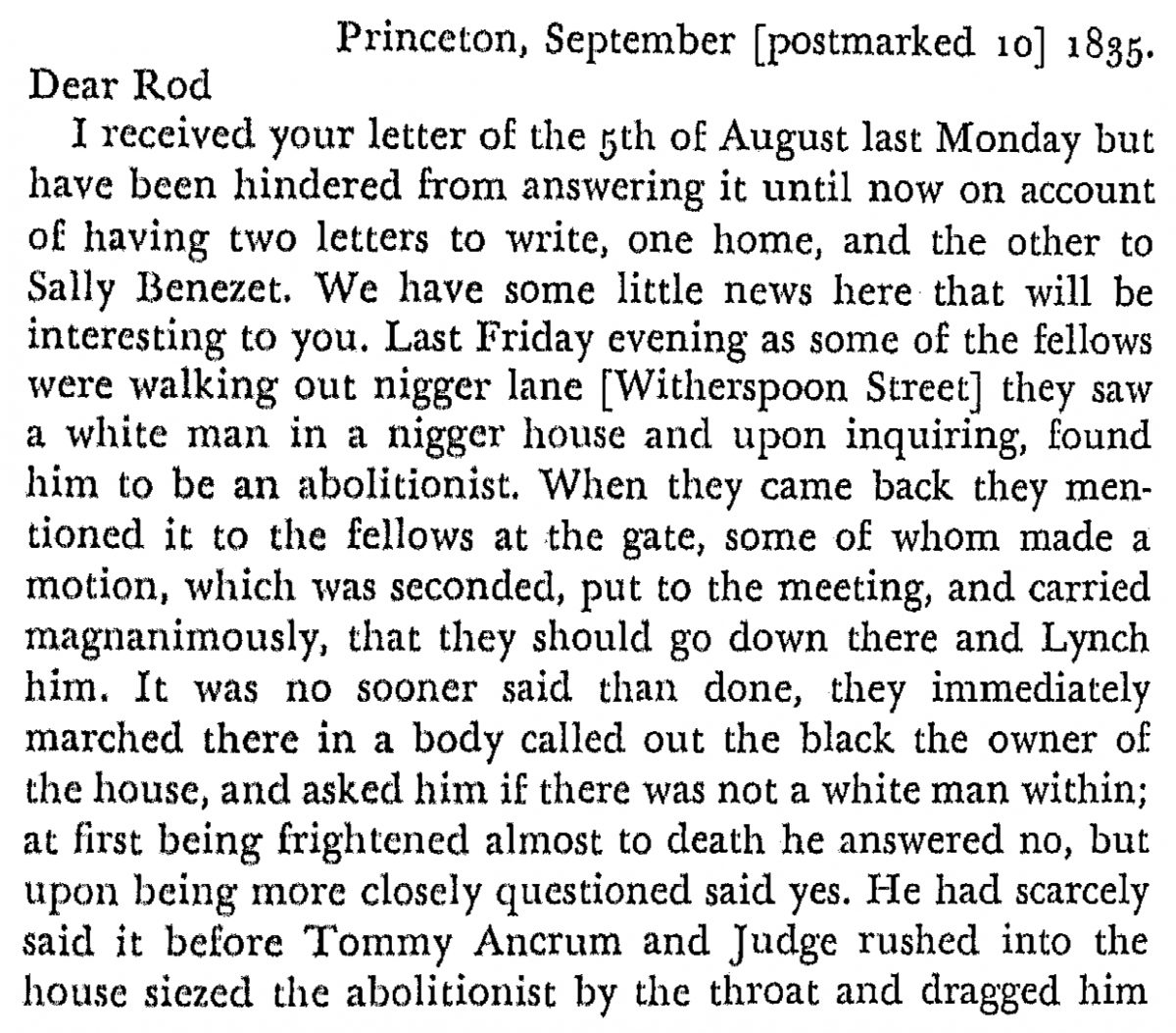 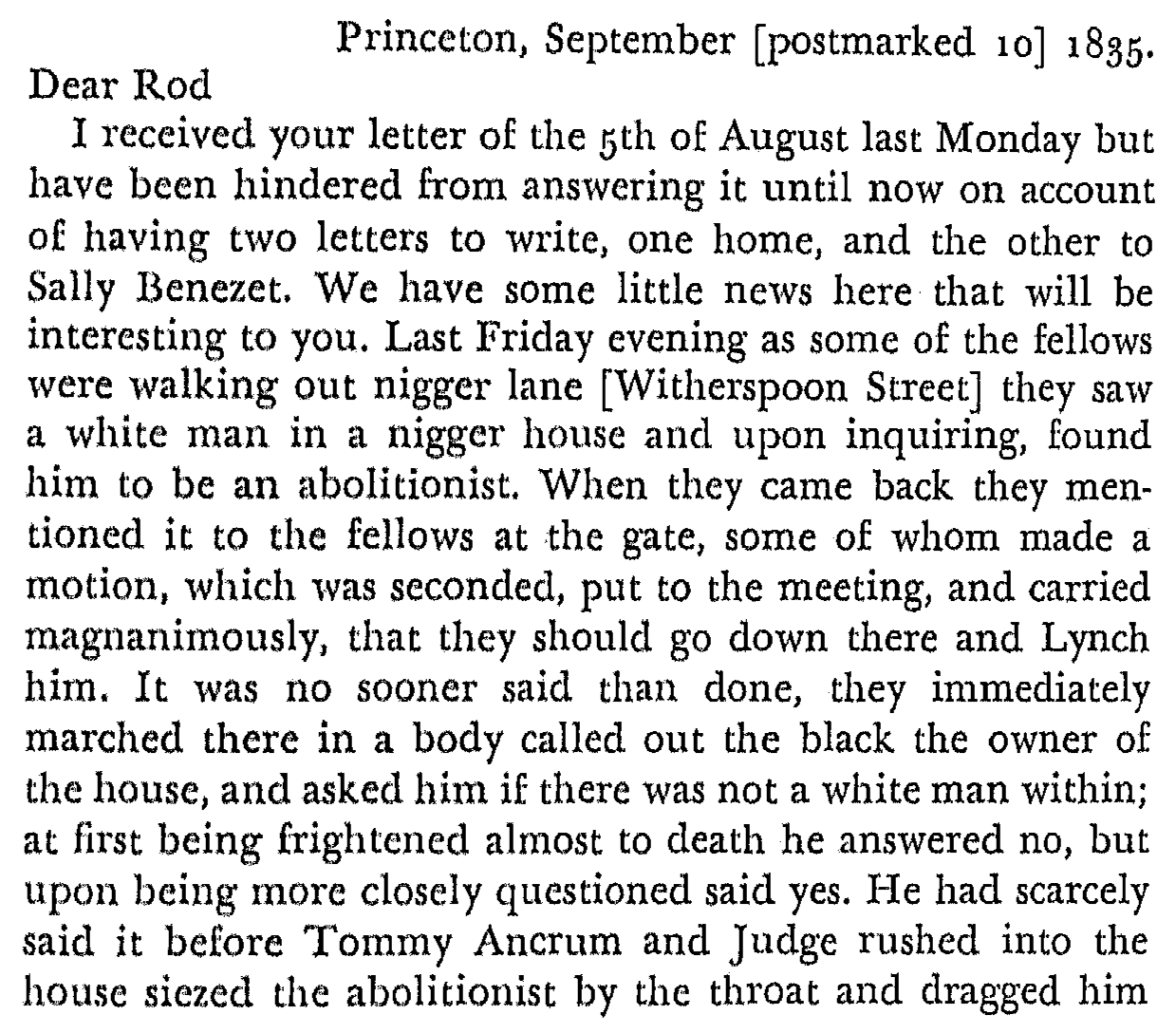 Tags: Princeton (Town of) Student Life Abolitionism Letters Alumni Violence
Share this Source:
Download Source
Transcription
Princeton, September 1835. Dear Rod I received your letter of the 5th of August last Monday but have been hindered from answering it until now on account of having two letters to write, one home, and the other to Sally Benezet. We have some little news here that will be

I received your letter of the 5th of August last Monday but have been hindered from answering it until now on account of having two letters to write, one home, and the other to Sally Benezet. We have some little news here that will be interesting to you. Last Friday evening as some of the fellows were walking out nigger lane they saw a white man in a nigger house and upon inquiring, found him to be an abolitionist. When they came back they mentioned it to the fellows at the gate, some of whom made a motion, which was seconded, put to the meeting, and carried magnanimously, that they should go down there and Lynch him. It was no sooner said than done, they immediately marched there in a body called out the black the owner of the house, and asked him if there was not a white man within; at first being frightened almost to death he answered no, but upon being more closely questioned said yes. He had scarcely said it before Tommy Ancrum and Judge rushed into the house seized the abolitionist by the throat and dragged him out taking away his papers they found that he was an agent for the Liberator, the Emancipator, and a parcel more of those infernal publications. The sight of these cursed papers exasperated the assembly (for some of the towns people had now joined them) to such a pitch that they began to cry out “Lynch him,” “kick him out of town,” “kick him to death,” “hang him,” tar and feather him. They certainly would have inflicted some grievous punishment upon had he plead so hard that he overcame them with pity; he said he had a wife and family in Philadelphia and that it was for their support that he had undertaken this agency. On hearing that he had a family Judge who had been one of his most violent persecutors became his warmest advocate and said that no one should hurt the man unless he did it through him. They told the old fellow that they would let him go upon condition that he renounced abolition and swore by all that is holy he would have nothing more to do with it. He took the required oath and promised he would leave town directly, but they, to be more certain of his going and to have a little more fun with him, said they would accompany to the end of town. They took him beyond the last house of the village, on the road leading to Phil, and letting him go told him to heel it for his life. Those who were there say they never saw a man run so fast before he soon got into a woods close by and they lost him. That you may not be astonished at his running so fast, I will just mention again the different kinds of punishment they threatened to inflict upon him if they caught him again; "tar and feather him,” "tar and feather him and set him on fire,” “put him in a hollow log stop up both end and heave him in the canal," “Lynch him," (which you know signifies thirty nine with the cowhide, tard and feathered, put in a canoe in the middle of the river without oars or paddle, and sent adrift) "hang him.” Whilst they were deliberating what they should do with him, the red headed nigger that lives at Hollises came up and wanted them badly to hang him. The poor rascal was frightened almost to death but I think he got off very well. Inquiring about him in town the next morning the learned that he was a single man, and that he came from N. York instead of Phila, Spencer's father was down here the other day to settle his son’s accounts. He found a bill of about one hundred dollars at Cpt. White’s twenty three shillings of which he paid, another small one of 180$ at Van Doren’s nine dollars of which he paid alleging as an excuse for not paying the rest, that the articles his son got were foolish things and that the store keeper had no business to let him have them. You may tell Ham there is not much probability of his coming back this session as Henry has turned Kilgour out of 51 and uses it as his study; Kilgour rooms in 53 with Tayloe. Commencement will be held in the back Campus immediately back of the prayer hall among the batteries and poplar trees. They are to have a large canvass awning which will cover about 1500 people. If you are back here on Saturday, that you may hear the Dr. bachelaureate on Sunday it will be time enough. Some of them are beginning to come back already. Commodore Taylor has been to the falls of Niagara and Trenton and to Quebec or Montreal, he has been back three or four days. I suppose Papa has gone down by this time when he returns you will see the new carriage give me a description of it when you write. I think you had better come over here to commencement you might bring the horse and carriage over if no one else intends coming and keep it here. I am very much obliged to you for sending the papers again. If you do not come over to commencement I shall expect you to be ready at the stage office on Friday to accompany me to Easton. It is getting late I must quit. Give my love to all.

I am Your’s affectionately

Expand Transcription
Share this Source:
Did You Know...?Princeton professors owned slaves as late as 1840. Read More