After graduating from the College of New Jersey in 1805, Thomas Carter Ruffin (1787-1870) went on to a distinguished legal career, serving as Justice of the North Carolina Supreme Court from 1829 to 1852, again from 1858 to 1859, and as Chief Justice of that court from 1833 to 1852. Ruffin is best remembered for his opinion in State v. Mann (1829), which overturned the conviction of a man guilty of shooting a leased slave in his possession and enshrined the legal fiction of absolute slavery in American law. As Ruffin declared:

The power of the master must be absolute to render the submission of his slave perfect.[1]

Ruffin’s decision had grave consequences for enslaved people throughout the United States, granting slaveholders unchecked authority over the bodies of their slaves without fear of legal repercussions. In the years leading up to the Civil War, State v. Mann would become a rallying point for abolitionists and antislavery advocates who read Judge Ruffin’s self-professed struggle “between the feelings of the man and the duty of the magistrate” as an exposure of the cold, inhuman rationality of slavery’s legal underpinnings.[2] 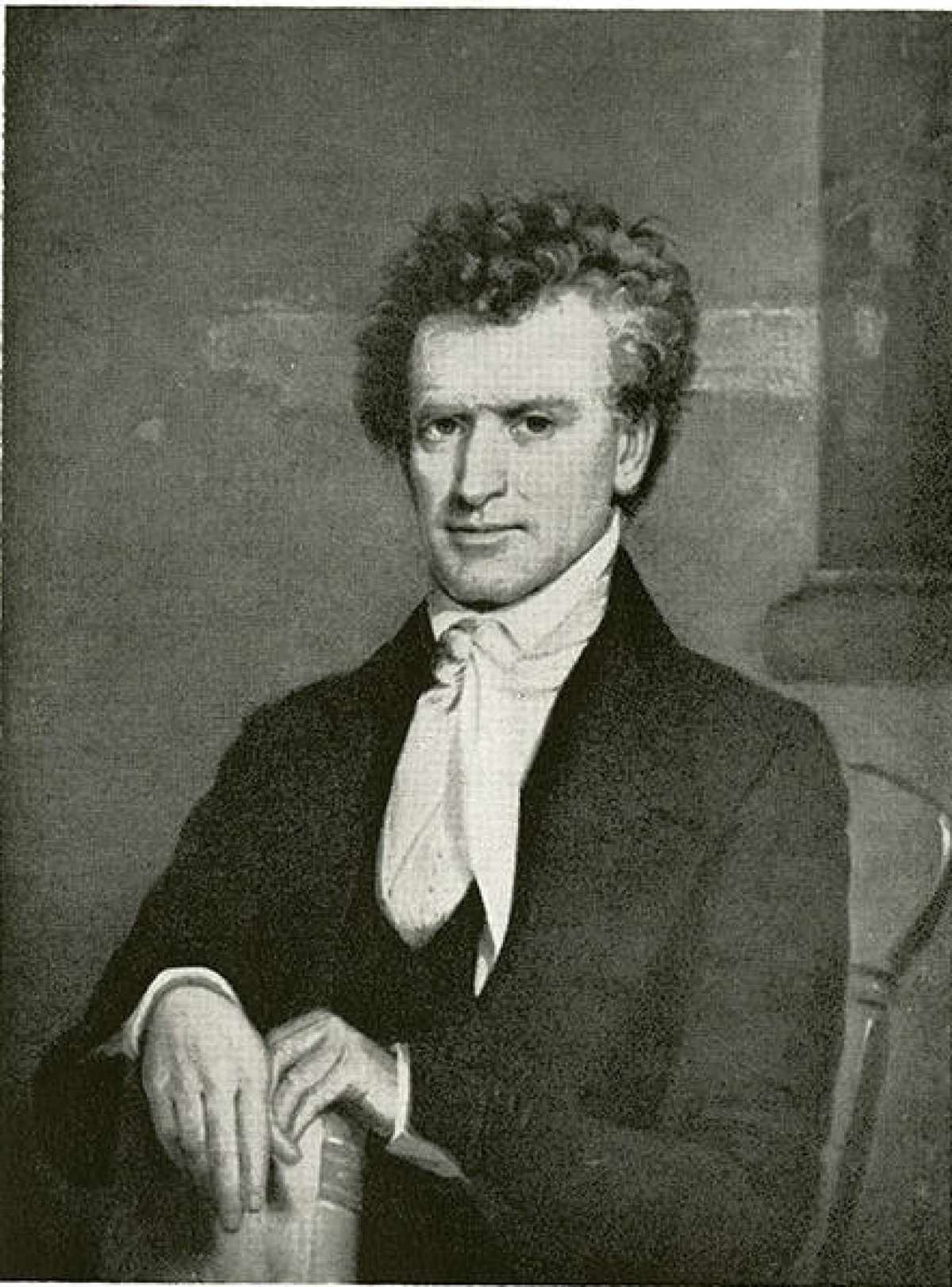 Though Ruffin spent most of his life and career in the South, his interest in law and his struggle to reconcile his moral misgivings about slavery to the “order of things” can be traced to the years he spent as a student at Princeton.[3] While living and studying in Nassau Hall, Ruffin exchanged dozens of letters with his father, planter and Methodist minister Sterling Ruffin, as well as with a friend and neighbor from Virginia, William Garnett. While the content of Ruffin’s correspondence varied widely, several letters touch on slavery and offer insight into Ruffin’s thinking on the issue during his undergraduate years.

Ruffin likely first encountered Northern antislavery thought while studying at the College of New Jersey. In 1804, Ruffin expressed his growing misgivings about slavery in a letter (no longer extant) to his father who,in June of that year, responded: “I was not surpris’d at reading your sentiments on Slavery, as I was well aware of the impressions which a different mode of treatment than that pursued in Virginia, would make on a Heart, which I hop’d was capable at all times of sympathizing in the misfortunes of a fellow mortal.” Sterling Ruffin chastised his son for lamenting the “uncommon hard fate” of slaves without being able to ameliorate the situation, writing:

You will not pretend to throw blame on the present generation, for the situation of these unhappy domestics, for as they are impos’d on us, and not with our consent, the thing is unavoidable.

He further explained that the scale of Southern plantation slavery by its nature necessitated the harsh treatment of slaves that his son critiqued, for without the benefit of living in close proximity to white masters, as he put it, “their minds have degenerated into as abject slavery as their persons.”[4]

If Ruffin’s father tried to instill in his son a sense that slaveholding was an unbreakable trust passed down from generation to generation, letters exchanged between Ruffin and his friend William Garrett suggest the difficulties that young men in Ruffin’s position felt in reconciling themselves to their own future as slave-holders. In July 1805, Garnett wrote approvingly of Ruffin’s recent decision to study law, explaining that he too intended to settle on a profession. Garnett admitted:

My principal inducement for adopting this method of gaining a livelihood is the great aversion which I have to the manner of cultivating our lands in Virginia by slaves. I feel myself utterly incompetent to the task of managing them properly. I never attempt to punish or to have one punished but I am sensible that I am violating the natural rights of a being who is as much entitled to the enjoyment of liberty as myself. Under such impressions as these I can never be happy while I am forced to act in a manner which my conscience reproaches me for.[5]

It is impossible to know if, like his friend, Ruffin believed a career in law might allow him to avoid dirtying his hands and his conscience with slavery. As much as Ruffin’s decision in State v. Mann justified the brutality of the system through the language of inevitability, it also articulated the need for jurists to subjugate their personal sentiments to the rationality of the law, offering a fundamentally conservative view of the role of jurisprudence. As Ruffin explained, it was useless to “complain of things inherent in our political state.”[6]

But Ruffin’s clear expression of the contrast between his humane sentiments and the rule of law gave abolitionists ammunition to challenge State v. Mann as a reflection of the inhumanity of slavery. Theodore Weld addressed the case in American Slavery as It Is (1839), as did William Goodell in American Slave Code in Theory and Practice (1853); the case also featured prominently in Harriet Beecher Stowe’s The Key To Uncle Tom’s Cabin (1853), published a year after her best-selling novel. According to Stowe, no one could read Ruffin’s decision “without feeling at once deep respect for the man and the horror of the system.”[7] She wrote that her one regret was that “such a mind” as Ruffin’s should have been “merely an expositor, and not a reformer of the law.”[8]

In reality, Ruffin’s legal career and his slaveholding went hand in hand. Following his graduation from Princeton, he studied law in Virginia and North Carolina, and was admitted to the bar in 1808. When he married in 1809 he was given 10 slaves by his father and father-in-law as a wedding gift. He expanded his holdings in land and human chattel through the success of his courtroom career and, by 1830, owned 30 slaves, two plantations and various lands throughout North Carolina and Tennessee.[9]

Ruffin’s judicial career often ensured his absence from home. Though Ruffin thought of himself as a kind master, especially as paternalistic defenses of slavery became popular, he left his slaves under the authority of an overseer so brutal that at various points his friends, neighbors, and wife wrote to the judge  about the “evil and barbarous Treatment” of slaves who were being “worked to death.” The people Ruffin held in bondage routinely attempted to run away, and twice attempted to burn the family home in 1836. As Ruffin’s friend and former law teacher wrote to Ruffin in a January 1823 letter, his home was the site of atrocities “too revolting to be put on paper” though the letter did include the grizzly news that Will, one of Ruffin’s slaves, had been “literally barbecued, peppered and salted.”[10]

Despite any moral objections to slavery that Ruffin might have voiced, his home—like many others—was a place ruled by the cruelty and violence that, as a judge, Ruffin protected and upheld under American law.

View all stories by Julia Grummitt »

The letters that Ruffin sent are no longer extant; however Ruffin’s years at Princeton marked the only time in his life that he kept a diary, which is held in the collection of the University of North Carolina. In it, he refers to sending a letter to his father “on my determination of having Negroes.” See Hadden, “Judging Slavery: Thomas Ruffin and State v. Mann,” 2.

Ibid., 80. In a subsequent letter, Garnett clarified that he did not support emancipation, and that “should such an event take place the evil done to themselves as well as to society in general would be incalculable.”

Harriet Beecher Stowe, A Key to Uncle Tom’s Cabin: Presenting the Original Facts and Documents upon Which the Story Is Founded. Together with Corroborative Statements Verifying the Truth of the Work. (London: Low and Company, 1853), 78. Stowe would also include a thinly veiled account of State v. Mann in her second anti-slavery novel, Dred: A Tale of the Great Dismal Swamp (1856).